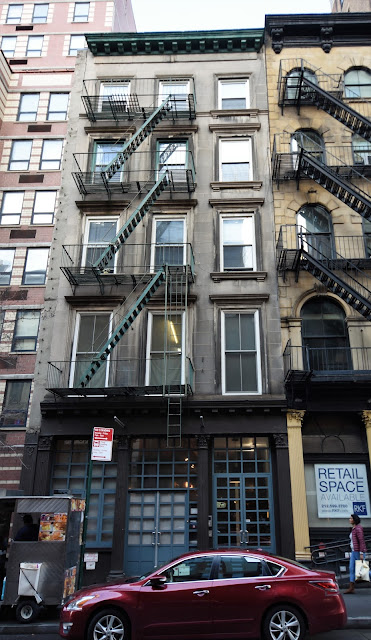 John White arrived in Baltimore from Ireland soon after the Revolutionary War.  He established John White & Co. in New York in 1804.  Among the merchant's 10 children were Robert and Campbell, both highly successful and wealthy.

By 1832 Campbell had moved his family to No. 145 Chambers Street.  The upscale block between West Broadway and Greenwich Street attracted well-to-do homeowners, like merchant Ellis Potter who lived next door at No. 143.  Despite Campbell's large family (he had 10 sons), Robert, who was still unmarried, moved in.

Both men were well respected.  Not only did they continue their father's business, Campbell was elected to Congress in 1829 and was re-elected for four successive sessions,  And both were directors in the Manhattan Bank.  That position would bring about the end of their respectability.

On March 21, 1840 the Manhattan Bank was on the brink of collapse and two men were held responsible for the failure.  The day before Robert White had been arrested.  The Morning Herald was not sympathetic.  It reported "The Recorder, no doubt, means to act with the firmness of the Roman, Lucius Junius Brutus; and when Bob is found guilty, the Recorder means to tell him...that 'this breaking of heads with bludgeons from behind, and assaulting respectable people, is a serious offence"...and that he must 'suffer some'."

He and his brother had been, in effect, embezzling bank funds through a complex series of loans to one another.  The Morning Herald opined "The slovenly manner in which the whole of the affairs of this bank has been managed reflects lasting disgrace on the whole of the direction, all of whom should immediately resign."

Within a decade commercial interests would begin pushing the wealthy homeowners away from Chambers Street.  Robert and Campbell's brother, John C. White, demolished the house in 1854 and erected a store and loft building.  In doing so he damaged the party wall with the Ellis Potter house; resulting in a lawsuit that dragged on until April 1861.

The upper floors of the five-story building were nearly residential in character.  The picture frame-like architrave surrounds of the openings sat on carved sills upheld by scrolled brackets and were topped by handsome cornices.

The cast iron store front, with its fluted Corinthian columns and pilasters, was among the first in a trend that was rapidly taking hold.  The concept of precast iron architectural elements in New York was only about six years old at the time.  Within the next decades the Tribeca and Soho neighborhoods would see the rise of scores of cast iron fronted structures.

Among White's first tenants were E. W, Parker, and brothers M. M. and C. C. Keeler.  It is unclear what businesses they were involved in.   By at least 1874 Louis E. Howard occupied the retail space where he sold knives and cutlery.

Well-heeled passengers of public transportation were well advised to guard their possessions, as ruffians and gangs took advantage of the crowded streetcars.  On Mach 18, 1874 Louis E. Howard was on his way home, riding on the rear platform of a Broadway streetcar.  As he was getting off at Fourth Street, he "was jostled against by a gang of thieves," reported The New York Times, "and in the crush his watch and chain, valued at $160, were stolen."

The gold watch would be worth nearly $3,500 today; but while Howard knew he had been robbed, he remained cool.  Instead of alerting the crooks that he was aware of the theft, he silently followed one until he found a police officer.  William Stanton was arrested and held on $1,000 bail.  Howard's watch was found in his pocket.

Howard would be back in a courtroom two years later,  Chicagoan George H. Martin had dropped into the store on August 14, 1876.  The 31-year old browsed among the goods, then attempted to leave.  But he had been watched by a suspicious salesman, who barred his escape.  When he searched Martin's coat, he found $46 worth of pocket knives.


By the last quarter of the century the produce district was centered around the Chambers Street block.  John Early was in the building by 1886 when his most lucrative contract was with the City of New York.

But in 1895 the firm jumped on the rabid new fad that swept America--the bicycle.  The Iron Age reported on November 21 that J. S. Barron & Co. would be representing Davidson & Sons of Chicago; including the popular "bicycle built for two."  The journal wrote that the Davidson Bicycle "is made in four models--men's road wheel in three heights of frame, ladies' wheel, diamond frame tandem and combination tandem."

The C. C. Stutts Glass Company operated in an upper floor at the time, run by brothers Arthur C. and Conrad C. Stutts.   The firm represented the Pennsylvania flint glass manufacturers Agnew & Co., among others, in 1898.  It would stay on at No. 145 Chambers Street through the turn of the century.

In 1902 J. S. Barron & Co. erected its own building at Franklin Street and West Broadway.  At that time the tenant list at No. 145 Chambers Street was changing.  Robbins & Meyers dealers in electric motors had been here at least a year.  It advertised its "Standard Motors" as "made especially for linotype machines, presses, cutters, binders, staplers and other printers' machinery."


The firm was soon joined by the Virginia-based Richmond Electric Co.  It too sold printers' motors.  Both companies would be in the building through, at least, 1914.  Despite the implication of its name, the Standard Scale and Supply Co., which moved in by 1916, sold "sand mixing machines."

Machinery manufacturers filled the building until 1931 when B. Schnee and the Northam Trading Company, candy wholesalers, leased the entire building.   Within the decade it was taken over by another confectioner, S. F. Hollander, Inc.

The president of S. F. Hollander in 1940 was 38-year old David Sanders who lived in Brooklyn with his wife.  He arrived at the office at 9:00 on November 19 that year, a day that seemed to be no different that any other.  At around 11:00 Sanders took the elevator up to the fifth floor, which was used as the stockroom.   His prolonged absence was apparently not given much thought until an employee discovered his body a few hours later.

Sanders had devised a noose from twine and tied it around a rafter.  The material was not strong enough to hold his weight, and snapped when he attempted to hang himself.  He was found on the floor with the noose around his neck.  Although the cord had not held, the action had snapped his neck.

The last quarter of the century saw remarked change in Tribeca.  In 1990 No. 145 Chambers Street was home to the Contemporary Russian Art Center of America.  The Center originated as an exhibition space for contemporary Soviet art; but was now a repository of Soviet art, books, magazines, photographs and documents.

Like so many Tribeca loft buildings, the upper floors were converted to residential space in 2010--just one apartment per floor.   While the storefront has been heavily altered, the early columns and pilasters--including their ornate capitals--survive after more than 160 years.