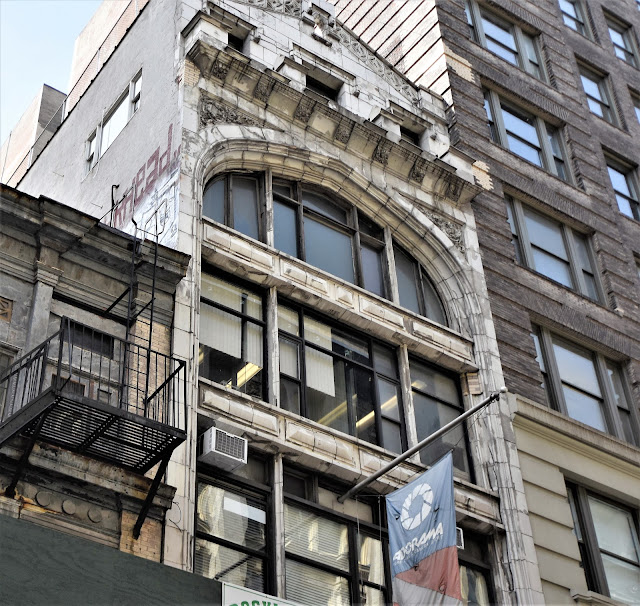 In 1851 Goold Hoyt traveled to Washington D.C. for his wedding to Camilla Scott, the daughter of General Winfield Scott.  The newly weds would eventually settle in the upscale, four-story house at No. 45 West 17th Street, between Sixth and Fifth Avenues.  Directly behind the residence, facing 18th Street, was the couple's two-story carriage house.

Hoyt, whose family arrived on Long Island from Holland in the 17th century, was "a leading merchant of this city," according to The New York Times, and a founder of the Merchants' Exchange.  Camilla was described by The Sun as having "the same blonde beauty and haughty bearing that distinguished all [Winfield Scott's] daughters."

Camilla died in February 1882 and Goold in 1883.  At least one son, Winfield Scott Hoyt, remained in the 17th Street house.  His social eminence was reflected not only in his memberships to exclusive social clubs like the Union Club, Manhattan Club, and the Racquet Club; but in his close relationships with Manhattan's wealthiest citizens.

On July 24, 1892, for instance, he was a guest on William K. Vanderbilt's yacht, the Alva while summering in Newport.  The vessel was described by The Sun as "the largest and finest pleasure craft that ever glided down the ways of an American ship yard."

All but some of the 56-member crew were asleep at around 8:00 that morning when they were awakened by a deafening crash.  A freighter had smashed into the Alva, causing the millionaires and the crew to scramble into lifeboats.  The Sun reported "in twenty minutes the Alva sank, carrying with her a fortune, but fortunately there was no loss of life."

At the time the neighborhood around Hoyt's house had drastically changed.  Sixth Avenue, just steps away, was now lined with palatial retail emporiums as the Metropolitan Elevated Railway chugged along above.

As the turn of the century approached, two another millionaires arrived in New York City.  Partners Henry Phipps and Andrew Carnegie were from Pennsylvania where they had amassed vast fortunes in steel.   When J. P. Morgan bought the Carnegie Steel Company in 1901, Phipps walked away with the equivalent of $100 million today.

Phipps turned his attention to real estate and on January 11, 1907 bought the Hoyt house and stable.  Two months later he announced that he would built a six-story loft building on the plot.  His choice of architects was interesting.

In 1903 Phipps had leased a Scottish castle and during his stay hosted George Crawley as a house guest.  At the time Phipps was in the process of erecting his massive Fifth Avenue mansion, designed by Trowbridge & Livingston.   That project dragged on and Phipps had numerous complaints about the architects' work.   He showed Crawley the plans and was impressed by the designer's suggestions.  When he returned to New York, he brought Crawley along to consult on the house.

Phipps' son, John, was perhaps more impressed with Crawley.  He asked him to design his country estate, which would be called Westbury House.    Because he was not a trained architect, Grosvenor Atterbury was contracted to work with Crawley on the technical aspects.  The neo-Georgian mansion is a familiar landmark and Crawley's masterpiece.

Now Henry Phipps hired Crawley to design his loft building.  The plans, which described it as "of brick, with terra cotta trimmings," was estimated to cost $90,000--a little more than $2.3 million today.

The phrase "terra cotta trimmings" was a bit of an understatement.  The 18th Street facade was entirely faced in the gleaming white material above the cast iron storefront.   Neo-Gothic industrial buildings were cropping up around the city and Crawley joined the trend.  An immense four-story arch embraced vast factory windows, allowing an abundance of natural light.  Above a projecting, bracketed cornice, the sixth floor carried on the Gothic motif with square-headed drip moldings.


The 17th Street elevation was distinctly treated as the back door.  No attempt at ornamentation was made, and the decidedly industrial facade was faced in beige brick.

Completed in 1908, the building filled with tenants related to the apparel and dry goods trades.  The Riverside Silk Works took the block-through store, and the lofts were leased by firms like the Eastern Supply Company, makers of women's hats and hat linings, clothing makers Ben Schiff & Bros., and the Massachusetts Thread Mills.


Even as the new building opened, the Ladies' Mile shopping district was dying.  Roland Macy had started the northward migration of stores in 1902 when he moved his department store to Herald Square.  The last holdout, the massive former Siegel-Cooper department store, the side of which faced No. 42 West 18th Street, closed in 1918.

When the importing firm of Sgueglia, Grondona & Co. declared bankruptcy in 1922, it was apparently the last of the apparel-related occupants in the building.  The Depression years would bring a starkly different type of tenant.


The building became home to the Freie Arbeiter Stimme in the 1930s.  The longest-running Yiddish-language anarchist periodical in America, it was first published in 1890.  During its 1920 convention, the Amalgamated Clothing Workers of America had described the newspaper as "one of the courageous champions of the working class."  It often published literary works, like extracts of militant Alexander Berkman's book Now and After: The ABC of Anarchism.

By the late 1940s the building was home to the National Committee for Labor Palestine.  In January 1948 the Arab Higher Committee Delegation pleaded in writing with the FBI to investigate "all Jewish and Zionist organizations...which are raising funds to buy arms and ammunition and which are supporting the Haganah and Irgun, the Zionist terrorist groups."

Among the specific groups the Delegation fingered was the National Committee for Labor Palestine which, it alleged, was "publicly advertising for raising funds for these terrorist organizations."   A statement was issued from West 18th Street on January 9 denouncing the accusations.

The National Committee for Labor Palestine has been in existence in the United States for the last twenty-five years and is recognized by all labor and professional organizations as a bona-fide body...for its constructive purposes in Palestine and has nothing to do with terrorist organizations."

When the building was leased to the Manhattan Brush Company, Inc. the following decade, it probably seemed that the often-negative spotlight had finally dimmed.  The firm landed sizable contracts with the U.S. Government for supplying paint brushes to the Navy.   From 1958 to 1959 there were 11 such contracts.

But problems arose.  On January 13, 1964 a Federal grand jury returned a 175-count indictment charging the Manhattan Brush Company, "with cheating the Government of $234,838," according to The New York Times.  The Assistant United States Attorney, John W. Mills, described the brushes as "worthless."

In 2016, with the Ladies' Mile district now resurrected as a vibrant shopping and residential area, the 42 West 18th Street Realty Corp. sought a special permit from the city planning commission to erect a high-rise apartment building on the parking lot at No. 38 West 18th Street while also engulfing the vintage structures at Nos. 40 and 42.


As the details are worked out (the Landmarks Preservation Commission gave its go-ahead in 2015), the 1908 building has sat behind a sidewalk bridge for years.  Its once handsome terra cotta facade appear more than a little embattled and the cast iron storefront was long ago obliterated.