The first decade following the end of the Civil War saw rapid development of the Upper West Side.  In 1878 developer Richard Hennessey completed a row of five surprisingly narrow houses, each just 15 feet wide, on 64th Street between Lexington and Park Avenues.

Designed by architect James E. Ware, their identical neo-Grec facades were distinguished by a sharply angled second-floor oriel supported by a chunky bracket that grew out of a parlor floor pilaster.  The high stoops, architrave openings, and bracketed cornices were expected elements of the style.

By the mid-1890s No. 130 was home to bachelor Charles Auguste Valadier.   The young doctor had graduated from Columbia University in 1892.  His medical skills would far outshine (and apparently replace) his photographic skills.

The year before his graduation, in 1891, the had hobbyist submitted his work in the Photographic Exhibition at the American Institute Fair.  Photographic Times was brutally frank in its assessment of his candid shots.  "Chas. A. Valadier shows some 'Detective' snapshots.  They are mostly under-exposed and are badly printed and mounted."  The magazine did find redemption in one shot, though.  "No. 247 is an excellent enlargement of a dog, instantaneously taken."

Valadier turned his focus to his medical practice and the study of cancer.   His pioneering research drew national attention within the medical community.  On January 2, 1897 the Kansas Medical Journal reported on his demonstration at the College of Physicians and Surgeons.  The article said in part "Dr. Charles A. Valadier exhibited under the microscope a section from a giant cell sarcoma of the tibia...and was presented because it exhibited some interesting features of giant cells."

The doctor took time out for romance and on February 28, 1899 he married Regina Kartschmaroff.  The newlyweds would be looking for a new home before many years.  In 1905 he sold the 64th Street house to Isaiah Frank.

As the decades passed most of the houses along the block were altered or razed to conform with current architectural fashion.  But No. 130 retained its Victorian personality.  By the Great Depression years it was home to unmarried heiress Mary P. Jones.

Mary had four sisters and a brother.  When her mother, Annie C. Jones, died in 1919, she left extensive real estate holdings in Manhattan, Long Island, and upstate New York to her children.  Mary and her siblings, Loretta and William, were executors of the estate.  The arrangement did not end well.

In 1921 William felt it best to liquidate the real estate.  The properties were sold off one by one; but William soon felt he was not getting his fair share.   A contentious breach in relations between William and Loretta ended with his suing his sisters in an ugly court battle in 1938.

In the meantime, Mary lived quietly in the 64th Street house, involving herself with charities and philanthropies.   In March 1931, for instance, she was head of the benefit committee that staged a bridge party at Delmonico's for the Fresh Air and Convalescent Home of St. Vincent de Paul.  She was for years a director in the St. Rose's Settlement.  Located on East 71st Street, its goal was not only to conduct classes for the poor in sewing, cooking and singing, but to "give religious instruction to neglected and ignorant children and adults."

Mary's funeral was held in the house on March 1, 1951 followed by a solemn requiem mass at St. Vincent Ferrer Church a little more than a block away at Lexington Avenue and 65th Street.


Her house became home to architect Edward Durell Stone and his family.  As had been done elsewhere on the block three and four decades earlier, in 1956 Stone transformed the outdated house into an architecturally current structure.

On November 22, 1959 The New York Times commented that the use "of concrete filigrees and other meshed materials are coming into wide use for all types of interior areas--homes, offices and stores" and added "The use of filigreed masonry received its strongest impetus, perhaps, from the effective way it was applied a few years ago by Edward D. Stone, architect, on the exterior of the United States Embassy in New Delhi India, and subsequently the United States Pavilion at the Brussels World's Fair."  (The screen was, in fact, used on the detached theater building of the United States complex, not the Pavilion proper.)

For his own home, Stone removed the stoop and dropped the entrance to the basement level.  According to his youngest son, architect Benjamin Hicks Stone III, relocating the doorway "had the added effect of increasing the dramatic nature of the entry as the expansive first floor suddenly struck you as you emerged from the interior stairs."

As he had done in some of his major commissions, he distinguished the facade with a filigree screen; its material described by his son (known best his middle name Hicks) as "cast concrete block with embedded marble chips, much like terrazzo but with a coarser matrix."  The spellbinding geometric pattern variously became circles, squares or diamond shapes, depending on the viewer's immediate perspective.

Stone was early-on influenced by Frank Lloyd Wright.  The architects had meet at Wright's home and studio, Taliesin, in the summer of 1940.  The bold, clean facade provided privacy while admitting light.  And it announced in no mistakable terms that the mid-century had arrived on East 64th Street. 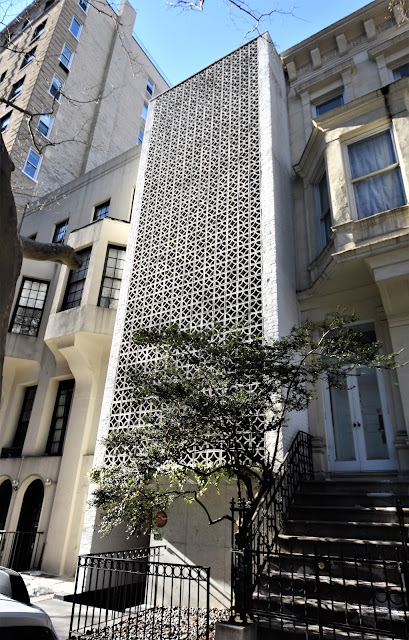 Stone extended the renovations to the interiors, removing walls and incorporating his filigree motif not only in partitions--actually sliding doors modeled on the shoji panels seen in Japanese residential architecture--but in one case as the framework below the luminous ceiling.  But unlike most architects at the time, Stone respected the history of his vintage home.  In one room James E. Ware's 1878 details--fireplaces and overmantels, and staircase railings, for example, now coexisted with starkly modern features.  According to Hicks Stone, "In fact he embellished Ware's original woodwork by adding wood paneling where there would have simply been plaster."


Edward Durell Stone died in 1978.  Years of weather and the expansion and contraction of steel reinforcing bars supporting the screen threatened its stability; and in fact chunks of concrete were falling away.   Hicks Stone removed the grill, faithfully reproduced and replaced it.


When Andrew Cogan and Lori Finkel purchased the house in 2004, they commissioned Hicks Stone to restore it and simultaneously update the kitchen, baths and mechanical systems.  The project was completed in 2005.   Fully aware of the architectural treasure with which they were entrusted, the owners donated an easement to the Trust for Architectural Easements; ensuring that Edward Stone's front and rear facades could never be altered.


Stone's distinctive design, which remained controversial for decades, was perhaps best described on November 8, 2013 by The New York Times columnist Robin Finn who said it "stands out like a snowflake on its tree-lined block."


non-credited photographs by the author
many thanks to Benjamin Hicks Stone III for his invaluable input and information
Posted by Tom Miller at 2:52 AM