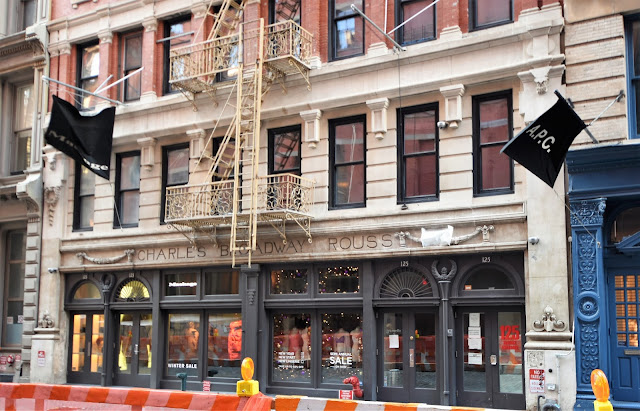 Charles Baltzell Rouss was what The New York Times, in his obituary, would call "an eccentric character in the commercial life of New York." A fervent Southerner, he was crushed when the Confederacy was defeated.  He was also broke.

At just 25 years old Rouss had run a successful mercantile business in Winchester, Virginia and accumulated a small fortune of $60,000--more than $900,000 today.  But the Civil War put an end to that.

King's Photographic Views of New York would explain that he came to New York "without money or influence, and with $11,000 of ante-bellum debts hanging over him."  Despite his radical views--he was an avowed atheist who "alienated many friends by his frankness in expressing his views upon the subject," according to The Times, and shocked many with his nonconformist political and social stances--he created successful department store by the last decades of the century.

Rouss changed his middle name to Broadway, the location of his 1889 store at Nos. 549-555 which stretched through the block to Mercer Street.  Here, according to King's, shoppers wandered among "art-objects, boots and shoes, carpets, corsets, cigars, walking-sticks, canes, clothing, gloves, hardware, hosiery, hats, jewelry, laces, linens, millinery, notions, piece-goods, shades, shawls, jackets, skirts, show-cases, stationery, tinware, woolens, white goods, everything that one may think of, useful or ornamental, for personal wear or house-furnishing, including the inimitable Rouss parlor-organs. The value of the stock is $2,000,000."

Despite his eccentricities, Rouss was respected for his commercial ability, his determination and success.  He drew much attention after his sight began to fail in 1892, at the age of 52.  Although his physicians assured him that he could save his sight by retiring; he deemed that "worse than blindness, and so he stuck to his desk," according to the New-York Tribune years later.

By 1895 he was totally blind.   He offered $100,000 to anyone who could restore his sight and was besieged by quacks and con-men hungry for the reward.  Not wanting to suffer unnecessary pain and loss of time, he hired another blind man, James J. Martin, as a test subject.  After Martin suffered the various experiments for years, Rouss finally gave up in 1900, announcing that he had accepted that he would die blind.

Rouss died on March 3, 1902, leaving a married daughter and a son, Peter Winchester Rouss, who was actively involved in the business.  He left an estate of about $2 million.  In reporting his death, The New York Times mentioned that he was known nationally for "his peculiar faculty for attracting public attention through dramatic and sensational feats."

Rouss's ability to attract public attention did not die with him.  Before the year was out Edna Weller McClellan, described by The Evening World as "a pretty young woman," filed suit against the estate.  She produced a letter, dated June 16, 1900, which read:

I, Charles Broadway Rouss, agree with Edna Weller McClellan that if she will agree not to bring any suit against me for any claim she has against me, I agree to pay her $35 each and every week during her lifetime.  C. B. Rouss.

Edna claimed that by December 30 the estate owed her six months in payments, amounting to $2,700.  Witnesses said she "was a regular caller at his Fifth avenue residence and seldom missed one of his Sunday night 'at homes.'"  The Evening World reported "More than this, the residents in the neighborhood of the McClellan home told an Evening World reporter to-day that 'hundreds of times' they had seen Mr. Rouss drive Miss McClellan up to her home in his own carriage."

If New Yorker society was shocked by the implied affair between Rouss and McClellan; they were in for more scandal.  On May 18, 1903 a woman calling herself Mrs. Eva E. S. Rousseau appeared in court with her 10-year old son, prompting The Evening World to report "One more of the apparently innumerable 'affairs' of the late eccentric and blind millionaire merchant, Charles Broadway Rouss, is the subject of a suit brought to trial to-day."

Eva demanded $100,000 from the estate for the support and maintenance of the boy.  The Evening World wrote "The little fellow is Charles Broadway Rousseau, a syllable being added to the merchant's name for the lad's patronymic."

A substantial testimony on Eva's behalf came from Rouss's cook, Nellie Logan.  She swore that "after the death of Mrs. Rouss, Jan. 29, 1899, Mrs. Rousseau and her little boy were frequent visitors; that Mrs. Rousseau often remained over night and that the little boy called Mr. Rouss 'papa.'"

In the meantime, Peter Winchester Rouss continued running the business.  On March 10, 1906 the Real Estate Record & Builders' Guide announced that No. 125 Mercer Street had been sold to "the owner of an adjoining plot.  A large business building will be erected on the site."

In fact the plot was not exactly "adjoining" the Rouss building, the back of which was directly across Mercer Street at Nos. 122-126.  Men's Wear magazine was more detailed, saying "Peter W. Rouss, of the firm of Charles Broadway Rouss, is erecting a 13-story red brick and limestone building...at 123-125 Mercer street.  It will be an annex to the firm's main building at 549-555 Broadway."  The magazine projected the cost at $250,000.  By August the Record & Guide had increased that figure to $300,000--about $7.8 million today.

Rouss had commissioned architect William J. Dilthey to design the annex.  Completed on March 31, 1908, it was as impressive and expansive as any grand emporium on Broadway or Sixth Avenue.  The building rose 13 stories above the sidewalk.  The narrowness of Mercer Street made taking in the full height difficult.  Dilthey may have had that in mind when he focused ornamentation on the lower two limestone-clad stories.


An especially elegant cast iron store front that included fanlights and stylized torches upheld a stone entablature that announced the store's name.  The rusticated second floor featured handsome paneled brackets between each opening.  Two story piers on either side were decorated with carved wreaths that dripped bellflowers, and decorative scrolls and shields at their bases.

When Peter Rouss was planning his annex in 1906, two department stores on Sixth Avenue joined forces.  Adams & Co. filled the western block front between 21st and 22nd Street; and Hugh O'Neill & Co. the block between 20th and 21st.  The combined stores constructed a tunnel underneath 21st Street for the convenience of its shoppers.

Rouss may have had that brilliant marketing move in mind when he chose the site for his annex building.  On October 21, 1907 he submitted an application to the Board of Estimate and Apportionment to "construct, maintain and use a tunnel" under Mercer Street that would connect the two buildings.

The tunnel, however, would not come to be.  The City asked that the plans be altered "to provide for a tunnel of less width."  Rouss balked.  After a year of squabbling, the engineer in charge, Harry P. Nichols advised the City that Rouss refused to comply with several requests and that he would not approve the application.

Charles Broadway Rouss continued selling its vast array of merchandise on Broadway and on Mercer Street until it closed in 1929.  The Mercer Street building became home to a variety of commercial tenants.  When Charles Broadway Rouss, Inc. finally sold the property in July 1946, its principal tenants were the United Cigar-Whelan Stores (one of the building's four elevators was dedicated to its use), and the Air Reduction Company.

Founded in 1902 the United Cigar-Whelan Stores operated the largest chain of cigar stores in the nation.  Although it had filed bankruptcy during the Great Depression, it bounced back and now boasted more than 1,000 stores.

The building, which stretched through the block to Greene Street, was converted to factory space.  Then, as the Soho neighborhood was reborn with art galleries, studios and restaurants, it was renovated for offices above the ground floor retail space, with the top two floors being duplex "joint work-living quarters for artists." 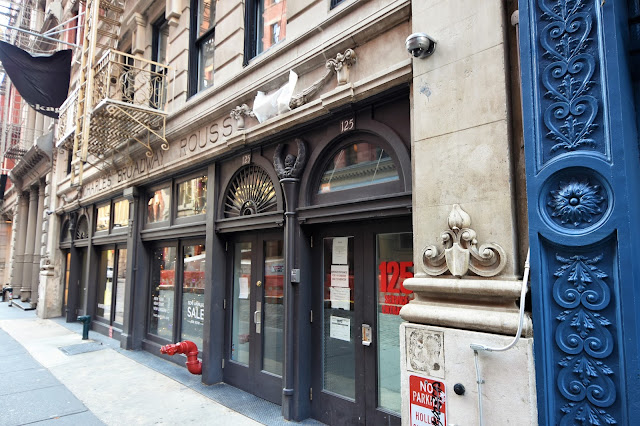 Somehow, through it all the wonderful cast iron storefront of Charles Broadway Rouss survived essentially intact--its carved name a reminder when one Broadway emporium lured shoppers to a more industrial side street.