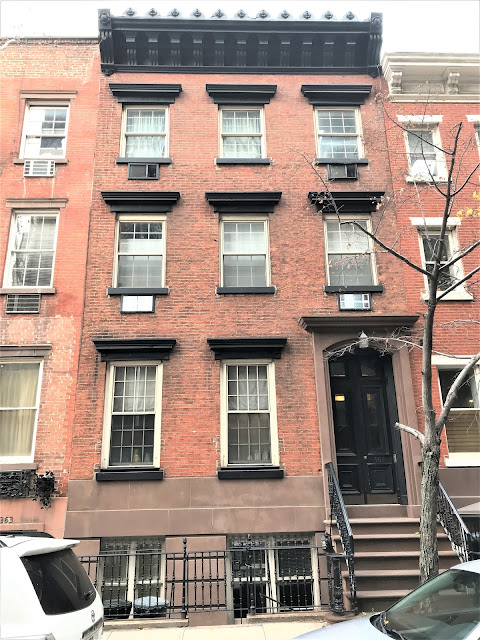 In 1845, Washington Irving Smith's pottery factory was located at 261 West 18th Street.  The firm manufactured industrial items, like clay drain pipes.  Smith and his family lived in a handsome, two-and-a-half story house at 241 West 19th Street (renumbered 361 in 1868), between Eighth and Ninth Avenues.  One of a row of identical homes, it featured understated brownstone lintels, a double-doored entrance above the high stone stoop, and a short attic level typical of the Greek Revival style.
Smith died around 1866.  His widow, Margaret, and son Washington, Jr. remained here until 1871 when the house was purchased by John M. and Mary A. Moffitt.  The couple paid the equivalent of $350,000 in today's money.
A sculptor, Moffitt was born in London in 1837 and came to New York after serving his apprenticeship there.  Appleton's Cyclopedia of American Biography noted, "One of the first orders he received after his arrival was for the execution of the figures that adorn the eastern entrance to Greenwood cemetery, and represent the four ages of man." 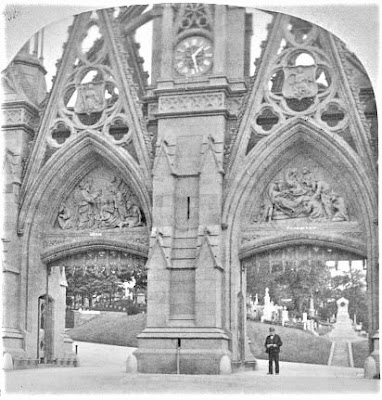 Two of Moffitt's bas relief panels are visible in this stereopticon slide of Richard Upjohn's magnificent Greenwood Cemetery gates.
Three years before moving into the West 19th Street house, Moffitts had executed the sculptures of Pike's Opera House on 23rd Street and Eighth Avenue.  On June 26, 1869 the Real Estate Record & Builders' Guide noted, "We also highly approve of all the sculpture work on Pike's Opera House...representing Mozart and Shakespeare, as well as Tragedy and Music, standing on the attached Corinthian columns in the centre of the main front on Eighth  avenue."
Calling Moffitt "an English sculptor of great celebrity in this city," the article added that he "also produced the 'Artic Monument' at Greenwood, the 'Soldiers' Monument,' in Connecticut, and the massive altar for the new church in New Haven, &c."  He was also responsible for the colossal Eagle and Her Young on the façade of the New York Life Insurance Company building at Leonard Street and Broadway.
An inventory of the household goods hints at the Moffitts' luxurious interiors.  Included were "costly oil paintings, by foreign artists," rosewood parlor furniture, a pianoforte, and Brussels carpets.  Notable was the "Herring's Iron Safe," which would have held cash, documents and, possibly, Mary's jewelry.
The Moffitts sold 361 West 19th Street to Thomas J. and Julia C. Coleman in 1877.  The couple paid $13,000, or about $330,000 today.  They took in a boarder in 1883, offering rooms on the top floor with "hot and cold water" for $17 per month (a pricey $455 today).  The advertisement sternly insisted, "no children."
In March 1884, following Thomas Coleman's death, Julia sold the house to Edward R. Merrill, president of the E. R. Merrill Spring Co.  He hired architect James Stroud to significantly update the dwelling.  The attic level was raised to a full third floor and a prominent cast metal cornice crowned with serrated decorations was installed.  Sheet metal sills and cornices were placed over the brownstone originals. 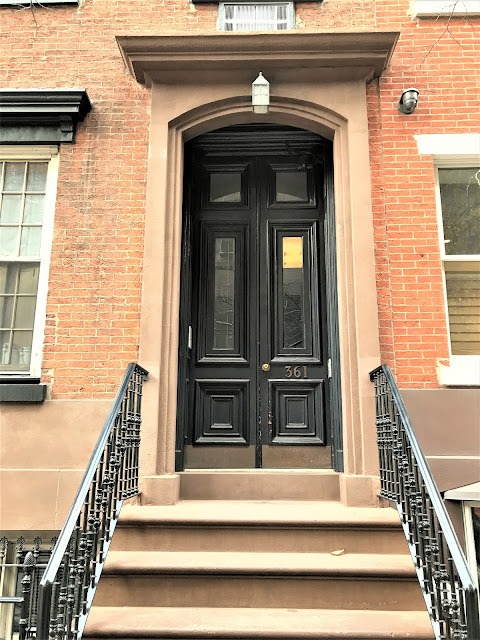 James Stroud's renovations included modern, paneled entrance doors.
The Merrill family remained in their remodeled house for two decades, selling it to Mary O'Neil in 1905, who operated it as a boarding house.
Among her newest tenants early in January 1907 was John Bailer, a bookmaker.  A month earlier he had married Hattie Moser and the couple had moved into Hattie's apartment on West 109th Street near Central Park West.  When he came home on New Year's Day, just three weeks into their marriage, Hattie was gone.  The Duluth Evening Herald reported, "He learned, he says, that she went away with young [James R.] Roosevelt in an automobile."
The married millionaire James R. Roosevelt, Jr., it turned out, had been paying the rent on Hattie's apartment and had also furnished it.  When Hattie did not return, Bailer put the furniture into storage and moved into the West 19th Street boarding house.  He then threatened to sue Roosevelt for the equivalent of $1.4 million in today's money, for the alienation of his wife's affections.
The scandalous story spread across the nation.  On January 12, 1907 the Roanoke Times said, "Unless the bride returns within a few days, which seems unlikely, the suit, Bailer says, will be filed."  Among those reading the shocking articles was Roosevelt's wife, Sadie.  The World commented that the millionaire's wife "knew much of young Roosevelt's escapades, but never suspected what was coming."
A flurry of suits followed the press coverage.  James Roosevelt swore out a writ "for the furniture, claiming it was his," according to The World.  Bailer pressed ahead with his alienation of affections suit, and on February 27 The Duluth Evening Herald reported, "The escapade[s] of James R. Roosevelt, Jr., are once more coming into the limelight, this time because his wife has begun proceedings against him for a separation."
Mary O'Neill sold 361 West 19th Street later that year.  It became the home of Dr. Henry J. Fischer, who had graduated from Cornell University in 1900.  Later it was occupied by Thomas A. Rosbotham, an executive of the American Distilling Company.  He died in the house on March 23, 1919.
The changing Chelsea demographics was evidenced in 1951 when the 602-4 East 138th St. Corp. purchased the house, from a doctor.  Court documents later said, "The parlor floor had been used as the physician's office, and the other three floors by his family as their residence."  Without notifying the Department of Buildings or filing plans, the new owner "promptly converted the building into an eight-family rooming house," according to The New York Times.  "It was rented to Puerto Rican families, generally consisting of seven or more persons, each occupying what was originally one room, under the most appalling slum conditions, at rents of over $110 per month."  (Astonishingly, that figure would translate to over $1,000 per month today.)
In July 1952, after tenants lodged complaints, an investigation was launched.  The State Rent Commission found that the owner had illegally "created squalid slums, not livable housing."  The house was subsequently officially converted to apartments, one per floor.  The alterations were completed in 1956.
A second renovation, completed in 1967, resulted in a duplex apartment in the basement and parlor levels.  Although holes for air conditioning units have been punched into the brick facade, the outward appearance of the house is little changed since its substantial make-over in 1884.
photographs by the author
no permission to reuse the content of this blog has been granted to LaptrinhX.com
Posted by Tom Miller at 1:33 AM