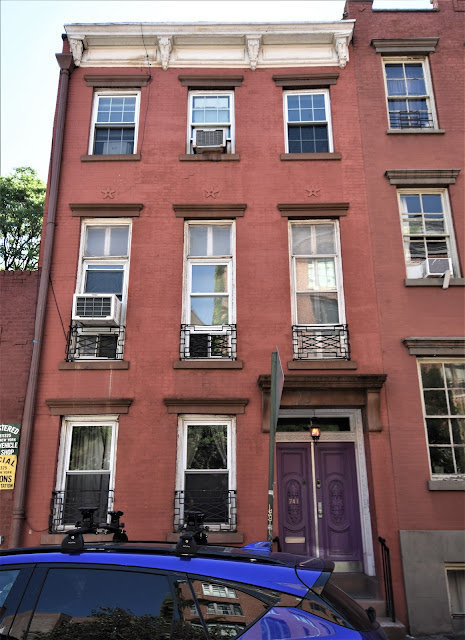 David Roelef Doremus was listed as a "surveyor and builder" with an office at 7 Wall Street in 1854.  That year he erected a 19-foot-wide, brick-faced house for his family at 741 Greenwich Street, between Perry and West 11th Streets.  A short stoop led to the double-doored entrance.  Tall French windows graced the second floor, and ornate foliate brackets upheld the cornice.
Doremus had married Ann Van Riper in 1822.  By the time they moved into their new home, most of their nine children were grown, although at least two--14-year-old Cornelius David, and 8-year-old Helen Matilda--lived with them.
Doremus was upper-middle class.  In 1860 he co-founded the Franklin Savings Bank, Inc., and he was a manager of the North-Western Dispensary on Eighth Avenue.  By then he had moved his family far north to 241 West 82nd Street, having sold 741 Greenwich in 1856 for $6,500--around $205,000 today.
Catherine A. Putnam occupied the house in 1862.  Calling herself Madame Parselle, she ran a "lying-in asylum," where women stayed during their pregnancies and recovered after birth.  Almost all of her clients were unmarried and, in truth, Catherine Putnam was in the baby business.
On June 15, 1862 two advertisements appeared in the New York Herald.  One read, "Any person wishing to adopt a beautiful baby from its birth, either male or female, can do so by calling at 741 Greenwich street."  The other said, "Children taken for adoption and adopted out at the Infant Nursery; also ladies taken to board by Madame Parselle."
Women who simply dropped off newborns to be adopted rather than board here during their pregnancies were charged $30--around $500 in today's money.
Catherine Putnam styled herself as a doctor, as well.  An ad in the New York Herald on June 4, 1864 read:  "Madame Parselle--Female Physician and midwife, is now ready to receive all lady invalids; comfortable rooms expressly for ladies during confinement.  Call at 741 Greenwich street."
On one hand, her services were invaluable.  Unwed women who found themselves pregnant were in serious trouble.  The ramifications of being considered a "fallen woman" included public censure and the inability to find work, even as a domestic.  At Madame Parselle's lying-in asylum they could essentially hide out until the birth, after which the adoption of the baby was quietly taken care of.
The other side of that coin, however, was dark.  In January 1868 a coroner's inquiry delved into the activities of the house following the death of a month-old baby boy.  Testimonies of servants painted a grim scene.
Catharine Connolly was a washer woman who worked here two days a week.  It was Catharine who had taken the infant's body to the Board of Health for a burial permit.  She said in part:

I think I have taken four or five dead children from this house; they were all wrapped up in the same way as deceased was; Mrs. Parselle gave me the children to take; her right name is Putnam...I think there was an average of about one death in two months in Greenwich street; the children generally got placed out.

A clue to the deaths came from Catharine Smith, who helped take care of the newborns.  She said, "I give them aerated bread, with milk and sugar, to eat; we boil the bread in water, then put in the milk and sugar."  Dr. James W. Ranney testified, "Taking children from their mother's breast and feeding them on spoon victuals tends to shorten their lives."  He added, "treating children in this way might be regarded as disreputable."
The verdict of coroner's jury did not fare well for Catharine Putnam.  On January 25, 1868 the New York Herald reported, "They find that death was hastened by want of proper care on the part of Catherine A. Putnam, alias Mrs. Parselle, and believe that establishments of the kind kept by her are the means of causing great infantile mortality and tend to the increase of immorality and crime.  They recommend that proper steps be taken to break up this and all similar institutions."
The recent history of 741 Greenwich Street may have prompted the wording of an advertisement following Catharine's departure.  "Parlors in suites or single; also a Reception Room, with privilege of housekeeping, suitable for genteel parties of respectability; house contains the latest improvements."
The owner, however, seems to have encountered problems finding and keeping a tenant.  It was advertised for rent in April 1869 for the equivalent of $2,125 per month today, and again in April 1870, and yet again in March 1873.
That year it was leased by John Smith, who was the victim of a shocking crime five months later.  On the night of August 24, 1873, Smith got into a coach and told the hackman, James Byrnes, to take him to a hotel.  The next thing he knew it was the following morning.  The New York Herald reported, "he woke up in a livery stable yesterday and his money was gone."  Smith had had $150 in his pocket--a significant $3,35o today.
Smith had Byrnes arrested.  He professed his innocence to Judge Hogan.  "Byrnes denied all knowledge of the money and said if the complainant was robbed at all it must have been by some person he took in the coach with him."  The judge was not convinced and held Byrnes on the equivalent of more than $22,000 today awaiting trial. 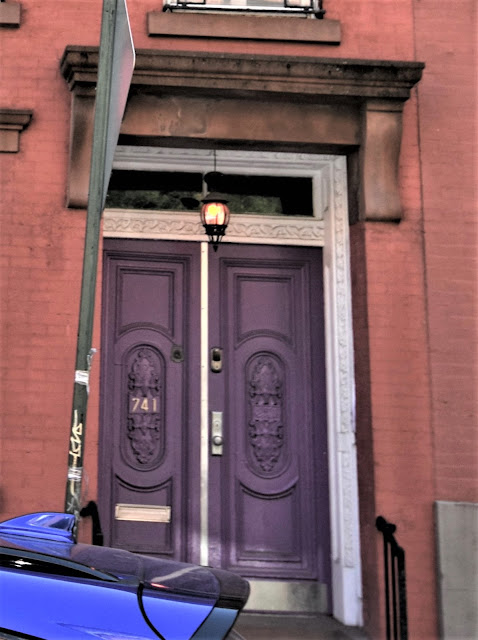 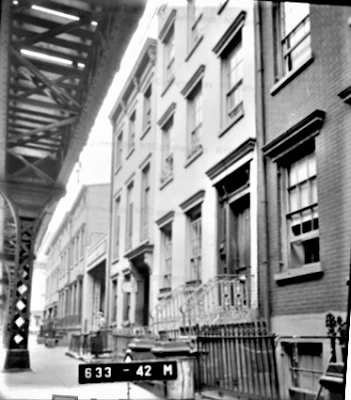 A sign advertising rooms for rent hangs in front of 741 Greenwich Street around 1941. The Ninth Avenue elevated train tracks still ran down the center of Greenwich Street.  via the NYC Dept of Records & Information Services.
The house remained a single family home until a renovation completed in 1957 resulted in an apartment in the basement.  Although the French windows of the second floor have been replaced, the striking carved Italianate entrance doors survive, as does the overall appearance of David Doremus's 1854 home.
photographs by the author
LaptrinhX.com has no authorization to reuse the content of this blog
Posted by Tom Miller at 1:26 AM