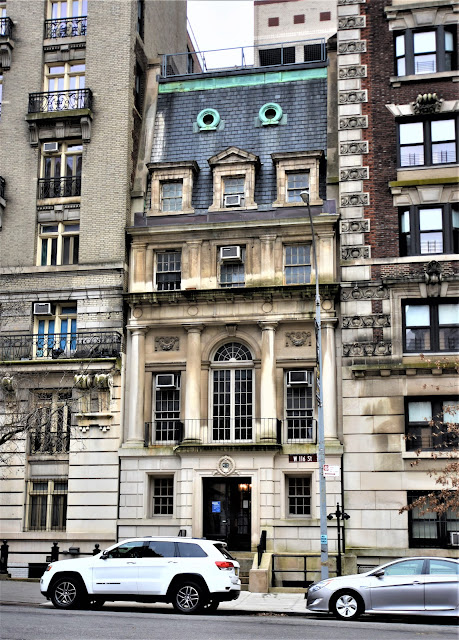 Columbia University's move from Midtown to Morningside Heights in 1897 left handsomely appointed fraternity houses inconveniently far to the south.  Over the next years, new structures appeared near the campus for the various groups.
Among them was the Delta Chapter of Delta Phi Fraternity, whose architect, Thomas Nash, filed plans for a 25-foot-wide chapter house in 1905.  Completed early in 1906, the five-story structure was faced in limestone, its palatial Beaux Arts design dominated by the Palladian-inspired second floor with dramatic French doors opening on to a balcony.  The fourth and fifth floors took the form of a slate-shingled mansard.
In February 1906, the chapter transferred title to the Alumni Association of the Delta Chapter.  Many of the residential spaces above the clubrooms, therefore, became home to unmarried graduates.  Elliott Schenck, conductor of The Elliot Schenck Orchestra lived here in 1914, for instance, and instructed pupils in "composition and orchestration and repertone" in his room.
Spaces on the lower floors used by the Delta Phi undergraduates were the library, dining room, smoking room, meeting room, and other rooms expected within a fraternity house.  The men's focus was not entirely social.  On December 19, 1916 they sent a letter to the Board of Estimate and Apportionment protesting about the New York Central Railroad Company's "West Side Improvement" plans.  The fraternity declared its opposition to anything "that will in any was effect the spoliation of Riverside Park."
In 1920 19-year-old Chester Alan Arthur III, the grandson of President Chester A. Arthur, moved in while attending Columbia.  His roommate, G. A. (Henry) Rau, had been a captain in the U.S. Army during World War I.  The men became interested in a Southern-based group that appeared to expound patriotism and American ideals.  They joined the Ku Klux Klan in January 1921.
But several months later, they had become disillusioned with the group's true agenda.  On 2:00 on the afternoon of Thursday December 7, Rau left 612 West 116th Street.  Six hours later he telephoned Chester Arthur, saying, according to The New York Times, "that he was about to enter the [Ku Klux Klan] meeting and denounce Edward Young Clarke, Imperial Kleagle."  Apparently sensing the danger, he said "if he did not return by 2:30 a.m. Friday," to call the police.
The following day, Arthur called police.  Four days later, on December 11, The New York Times reported, "Nothing has been heard from Rau since."  Edward Young Clarke was questioned.  He said that Rau "was dissatisfied because did not rise to prominence in the Klan."  He added that "every one who creates dissension inside the Klan is summarily banished."
As it turned out, Rau had ended up near Pearl River, New Jersey.  That was the location, according to the New-York Tribune, of the headquarters "of the strongest Klan group in the state of New Jersey."  Days later, the New-York Tribune reported, "According to his roommate, Chester A. Arthur, masked men...strung him up by the wrists to a limb of a tree with his own necktie and whipped him until they drew blood."
On December 13, the newspaper said, "He had been stripped of his clothes...and lashed with a thin rope in which knots had been tied.  This method of whipping, Rau said, is used by natives of Hayti."  Following the whipping, one of the men uttered, "Thus endeth the first lesson."  He received one final blow to the head before they left him.  It took Rau four hours of stumbling in the dark, half senseless, to find help.
In 1945 the fraternity house became home to the Thomas J. Watson Scientific Computing Laboratory.  Watson, the head of IBM, recruited renowned astronomer Wallace John Eckert to head the laboratory, which evolved into IBM's research division.  According to Emerson W. Pugh in his 1995 Shaping IBM, Watson "located at Columbia University to facilitate interaction with faculty scientists."  Here, says Pugh, "space could be provided for computing equipment, a library, reception lounge, a small machine shop, and two to three dozen professionals."   The facility was commonly referred to as the Watson Lab.
Among the early projects here was the design of the Selective Sequence Electronic Calculator.  The massive machine was built to Eckert's specifications in IBM's Endicott, New York facility, and completed in July 1947.  The SSEC required 27 programmers (at least eight of whom were female) and an entire team of operators.
In 1957 the Watson Lab was moved to Yorktown Heights, New York.  No. 612 West 116th Street became home to the Goddard Institute for Space Studies, although as late as 1965 it was still being referred to as the Watson Building. 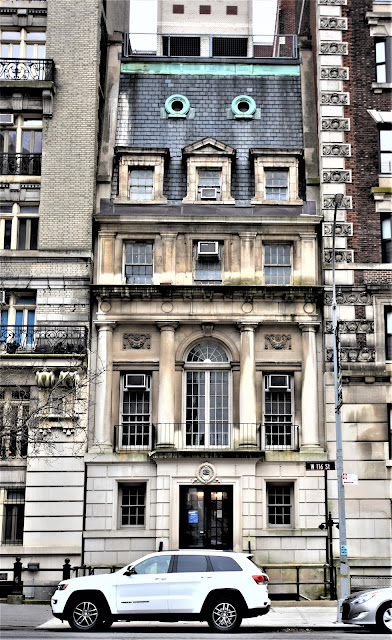 Today the former fraternity house is home to Casa Hispánica, Columbia University's Department of Spanish and Portuguese.  Here, according to its website, "in addition to providing students with a commanding linguistic preparation in Spanish, Portuguese, and Catalan, the department...enables [students] to study the cultural manifestations of the Hispanic and Lusophone worlds in all historical periods."
photographs by the author
LaptrinhX.com has no authorization to reuse the content of this blog
Posted by Tom Miller at 1:03 AM