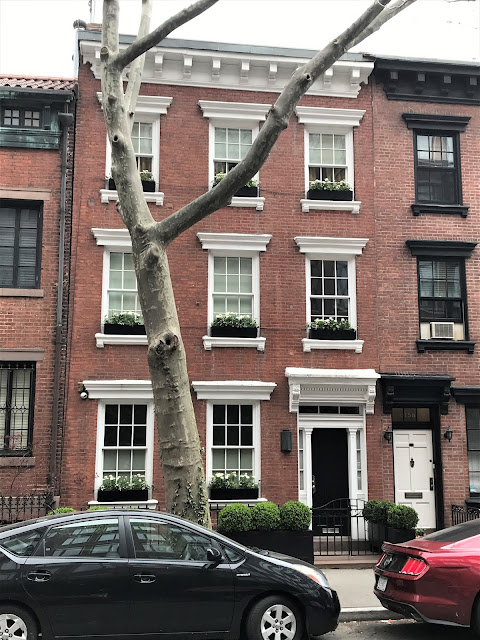 In 1845 James Boorman erected two nearly identical three-story houses on West 11th Street between Sixth and Seventh Avenues.  Because it was slightly wider, 86 West 11th Street (later renumbered 154) received a more impressive Greek Revival doorway, with narrow sidelights and a transom.
The house became home to Rev. Samuel Osgood and his family.  Born in Massachusetts in 1812, Rev. Osgood had been installed as the rector of the Unitarian Church of the Messiah on Broadway in 1849.  He and his wife, the former Ellen Haswell Murdock, had two daughters, Agnes Haswell and Bertha Stevens Osgood.  A third, Mabel Gray, would come along in 1859. 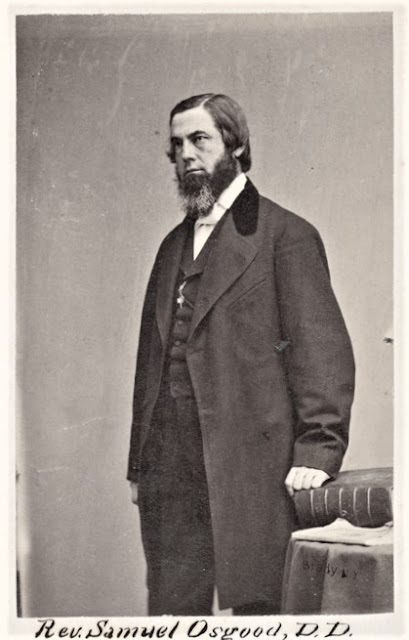 from the collection of the New York Public Library
In July 1860 a couple knocked on the Osgood door asking to be married.  Ellen showed them into the parlor where Osgood performed the ceremony.  The New York Times printed a one-line announcement, "In this City, on Saturday, July 7, by Rev. Samuel Osgood, D. D., Edwin Booth to Mary, daughter of Charles Devlin, all of Philadelphia."
The couple had possibly been unable to find a minister willing to marry them in a church ceremony.  Most clergymen at the time refused to be involved with members of the theater.  Edwin Booth was almost assuredly recognized by face or name by Rev. Osgood.  He was one of the most famous actors of his day.  Witnessing the ceremony was the groom's brother, John Wilkes Booth.
As the country became embroiled in what Northerners called the War of the Rebellion, both Rev. Osgood and Ellen threw themselves into relief work.  Ellen was instrumental in organizing the church women into the Nightingale Association.  Its object was "to furnish nurses, supply lint and bandages, and whatever may be needful for the comfort of the sick and wounded in the present contest."  On April 24, 1861 the New-York Daily Tribune reported, "the following articles were suggested as being especially useful: woolen socks, China medicine cups, linen towels, scissors, sponges, small cans of tea, small paper packages of tobacco, white-wine vinegar, and preserved fruits in cans."  Donations of these items, said the article, could be sent to "Mrs. Sam. Osgood, No. 154 West Eleventh-street."
Rev. Osgood was appointed to a committee of the New-England Soldiers' Relief Association.  On July 9, 1862 The New York Times reported, "The object of the Association was to provide property attention to the New-England sick and wounded soldiers as they pushed through New-York from the seat of war to their homes."  By now, said the article, the relief was not limited to only New England soldiers, but to all Union troops.  A hospital for soldiers was established, and food and money were provided for those less injured.  "If needed, as it invariably is, he is furnished with a shirt, boots, pants, in fact, any article of clothing he may be in need of, free of charge," said the article.
With the war over, the Church of the Messiah turned its attention to relocating.  On October 3, 1866 Rev. Osgood laid "with appropriate ceremonies," the cornerstone of its new building at 34th Street and Park Avenue.  Unknown to the congregation, and possibly even to himself, Osgood's ministry with the Church of the Messiah was drawing to a close.
In May 1868 he took what today would be called a year-long sabbatical.  The West 11th Street house was closed and the family sailed to Europe.  On December 22 The Southport Chronicle announced, "Dr. Osgood arrived from Europe in the Ville de Paris on Tuesday, the 14th, after seven months absence, and will not return to the pulpit at present, but will complete his year of retirement in literary pursuits."
Osgood was grappling with an internal conflict regarding his adherence to the Unitarian doctrines.  He resolved it by switching to the Episcopal faith.  He quickly became esteemed within that group of clergy.  On June 1, 1874, for instance, the Church Conference of Episcopal clergymen was held in the Church of the Incarnation on Madison Avenue and 35th Street.  The New York Herald reported, "Rev. Samuel Osgood presided."
Samuel Osgood was not one-dimensional.  He was a well-educated historian and author.  On May 7, 1873, for instance, the New York Herald reported, "A crowded meeting was held last night of the New York Historical Society at their library, for the purpose of hearing a paper read by the Rev. Samuel Osgood, D. D., on 'The Surprises of History.'  The discourse treated principally of the triumphs of peace and the great progress of education all over the world."  He also sat on the Executive Committee of the Officers of the Prison Association of New York.
In 1876 Osgood led the drive to create a commemorative vase to be presented to poet and editor William Cullen Bryant on his 80th birthday.  The Grecian-style sterling silver vase was fabricated by Tiffany & Co.  Then, three years later, Osgood was surprised to receive an exact copy (albeit in silver-plate).  A letter from Tiffany & Co. dated May 28, 1879 read:

As a souvenir of the Bryant vase, a most important work originated by you in recognition of the virtues and services of one of the most eminent Americans of this century, we beg your acceptance of a fac-simile electro-type which has just been completed for you.

Please let us know where you wish it to be delivered and much oblige,
Very faithfully yours,
Tiffany & Co.

Before accepting the tribute, Osgood contacted William Cullen Bryant.  "I hesitated until Mr. Bryant himself cordially assured me that he wished me to have this copy," he said in his reply.  The magnificent accolade sat in a place of honor in the West 11th Street house. 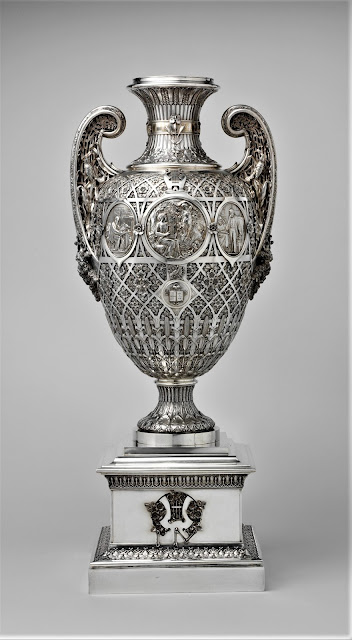 The original Bryant vase is in the collection of the Metropolitan Museum of Art today.
Less than a year later, on April 14, 1880, Samuel Osgood died in 154 West 11th Street at the age of 68.  His funeral was held in St. Thomas's Church on Fifth Avenue on April 19, conducted by Bishop Henry C. Potter.  The church was filled with some of the best-known clergymen of the city and from as far away as Georgia.  Eminent New Yorkers like Frederick de Peyster, Joseph H. Choate and Henry Dexter were among the mourners.
The subsequent owner, who added heavy cornices to the doorway and windows, took in boarders.  Living here in 1886 were Charles M. Dugay, a clerk; painter Charles S. Ethier; and Oliver B. Stout, who was a machinist.
In 1923 New Zealand-born industrial designer Joseph Claude Sinel arrived in New York.  A journalist for The American Printer wrote on November 5, 1924, "After six months with Calkins & Holden he became a free lance, and now has a studio at 154 West Eleventh Street, New York."
Sinel was far-reaching in his work.  He later said he designed anything from "ads to andirons and automobiles, from beer bottles to book covers, from hammers to hearing aids, from labels and letterheads to packages and pickle jars, from textiles and telephone books to toasters, typewriters and trucks."  In 1936 he relocated to San Francisco. 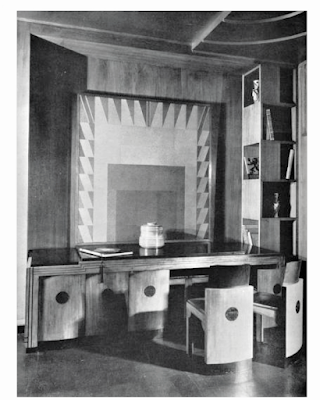 A Sinel-designed Art Deco conference room table and chairs. (original source unknown)
By then the house was being operated as unofficial apartments.  In May 1947 Lawrence and Rosalind Kaplan moved in.  Rosaline described their four rooms the following year saying "it is very charming, with a great deal of light, we have all the accessories for our culture and the culture of our children.  We have an excellent music library and several hundred books on almost every available subject." 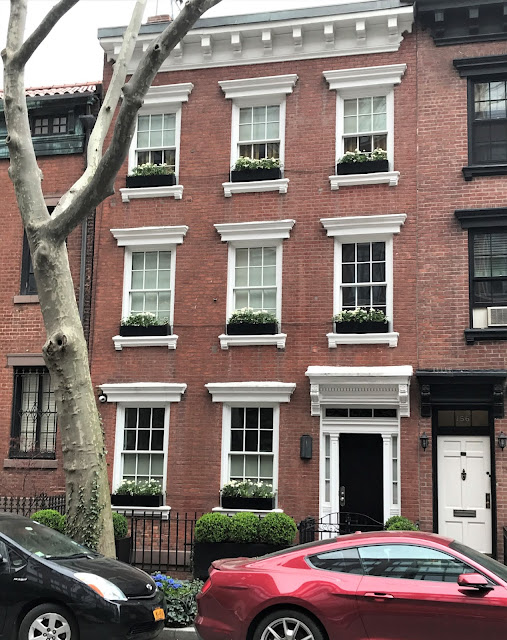 The 20-foot house was renovated in 1955, returning it to a single-family house.  It was purchased in 2005 by Brigitte Kleine, president of fashion company Tory Burch, and Robert C. Micheletto for $3.2 million.  The New York Times described it as having "three bedrooms and two and a half baths over 2,400 square feet, along with a small backyard garden."  They sold it in September 2018 for $7.6 million.
photographs by the author
LaptrinhX.com has no authorization to reuse the content of this blog
Posted by Tom Miller at 1:09 AM