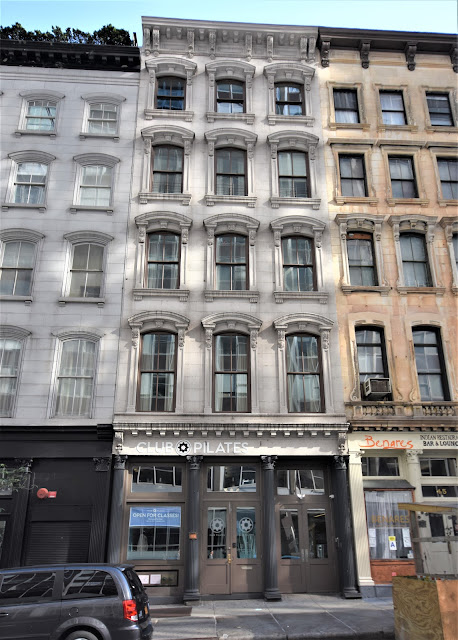 An announcement appeared in the Morning Courier and Enquirer in 1830 that read:

Mr. Ames, respectfully informs the Ladies of New York, and its vicinity, that he has taken rooms at 47 Murray street, and offers there for inspection, a great variety of miniature paintings, figures, flowers, fruits, animals, landscapes &c.  Terms for tuition 3 dollars.  Ladies attend[ed] at their residence if preferred.  Drawings and Painting in Albums and Scrap Books, elegantly executed.

The house where Mr. Ames rented rooms sat directly opposite the sprawling Columbia College building and grounds.  It was purchased in 1851 by Vermont-born attorney and politician Oscar W. Sturtevant, at a time when the neighborhood was beginning to change from residential to commercial.
It is unclear whether Sturtevant demolished or drastically remodeled 47 Murray Street around 1855.  In either case, the property now held a striking Italianate loft and store building, its design attributed to architect Joseph C. Wells.   Born in England, among Wells's works were the Century Association building on East 15th Street and the First Presbyterian Church on Fifth Avenue, both completed in the previous decade.
Above the cast iron storefront, the five-story building was clad in Dorcester sandstone.  The openings, which sat on molded sills, were framed by paneled architraves and wore handsome arched pediments supported by foliate brackets.   A complex cornice with paneled frieze completed the design.
Among the initial tenants was glove merchant Van Doren, Richmond & Hasbrouck, which signed a lease in 1858.  By 1861 M. & E. Dittman & Co., dealers in boots and shoes, occupied the store space.  Importers Schanck & Hotop, which dealt in "fancy dry goods," leased the second, fourth and fifth floors.  The third floor was home to fancy goods importer S. D. Nairne.
At around 11:20 on the night of September 9 that year fire was discovered in the building next door.  The New York Times reported, "In about half an hour from the time of the discovery of the fire, the entire building was a sheet of flame."  Around midnight, as 45 Murray Street blazed, firefighters discovered that the fire had spread to the roof and fifth floor of 47 Murray Street.  It advanced to the fourth floor before firefighters could extinguish it.
While 43 Murray Street was completely gutted, 47 Murray Street escaped with about $152,000 worth of structural damage in today's money.  The damages to tenants in fire and water damage was more severe.  Schanck & Hotop suffered nearly $760,000 in losses in today's terms.
Schanck & Hotop continued here following repairs.  They were joined by auctioneer E. T. Wills in 1862.  He liquidated the goods of out-of-business firms, or overstocked merchandise.  On April 1 that year, for instance, he auctioned 500 crates of earthenware, 250 cases of "best quality French glassware," and 500 packages of American flint glass.
On February 18, 1864, The New York Times warned merchants, "A number of rascals are going about the City now and almost daily engaging carmen to take bales and boxes of goods from the walk in front of large stores and warehouses, to be delivered somewhere up town."  Unwitting delivery drivers were duped into loading freight recently delivered at a business, then taking it elsewhere where he was paid and dismissed.
The article noted, "On Tuesday last, a case of goods, valued at $2,240, was in this manner taken from the front of Messrs. Schack & Hotop's store, No. 47 Murray-street."  This time the plan fell apart.  When the cart man arrived at 48 West 19th Street, William Richardson paid him for the trip, but said he made a mistake and gave him a second address.  The driver became suspicious and refused.  A police officer chased Richardson down and arrested him.
Schack & Hotop moved out around 1867.  By 1869 E. T. Wills's auction room had been replaced in the store level by A. Meyerberg, "dealer in fine glassware and crockery."  Occupying upper floors were "fancy hardware" merchants  T. C. Richards, and paper box manufacturer James P. Jones & Son.
Fire broke out in the cellar of 47 Murray Street at 6:00 on the evening of March 15, 1869.  Because A. Meyerberg used the space, there was little flammable merchandise and the fire was confined to the cellar "and the loss to stock by fire was quite small," according to The New York Times.  Upstairs, things were different, however.  The firefighters were proverbial bulls in the china shop.  The newspaper said that in the shop, "the loss from breakage was consequently fully $10,000."  The damage caused by the bumbling firefighters would translate to about $169,000 today.
Political passions ran high during the 1872 Presidential campaign between Horace Greeley and Ulysses S. Grant.  T. C. Richards got into the game by producing campaign buttons

Havana Journal, August 31, 1872 (copyright expired)
In 1885 New York's Great Industries described James P. Jones & Son as "among the leading houses" engaged in the manufacture of boxes.  The article noted, "Particular attention is given to the manufacture of boxes for the fur and the cloak trade, as also for boxes rounded and suitable for [the] musical stringed instrument trade."
The following year something went wrong between the long-established business relationship of father and son.  On July 24, 1886 an announcement in The Evening Post said that Martin W. Jones had "retired from the partnership" by mutual consent, adding, "The business will be conducted by James P. Jones."
At the turn of the century 47 Murray Street was shared by two starkly different tenants.  Batt, Gnost & Baberg manufactured cigars.  In 1901 it employed 60 men and 15 women who worked a grueling 51-hour work week.  More typical of the district was Fensterer & Ruhe, importers of china, glassware.  In July 1905 Glass & Pottery World called it "one of the most interesting stores in New York."
Fensterer & Ruhe had offices, as well, in Berlin and Toronto.  The wide variety of its elegant imports was reflected in a mention in The Pottery, Glass & Brass Salesman on February 16, 1910.  The article said, "At Fensterer & Ruhe's, 47 Murray Street, they have a wonderful array of basketware from one of the leading European factories, embracing jardinières, flower holders, bon-bon baskets and table centers." 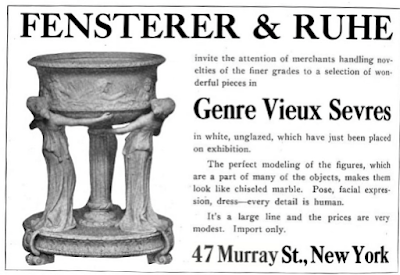 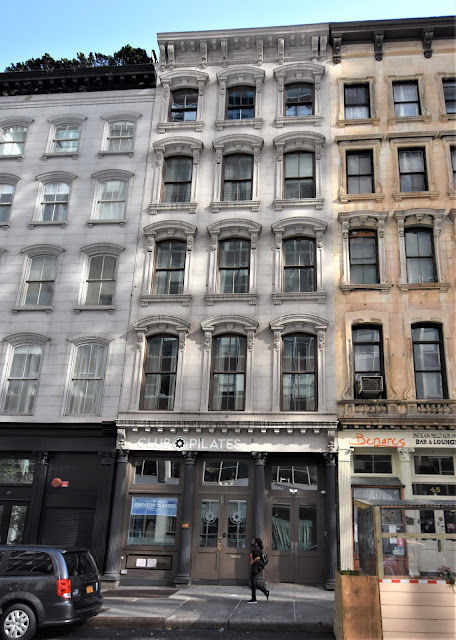 The neighborhood continued to change and in 2009 47 Murray Street received a make-over.  There were now an office on the ground floor and one apartment each on floors two through four.  A duplex engulfed the fifth and new penthouse level.  Yet outwardly, Joseph C. Wells's venerable building is essentially unchanged.
photographs by the author
no permission to reuse the content of this blog has been granted to LaptrinhX.com
Posted by Tom Miller at 1:46 AM