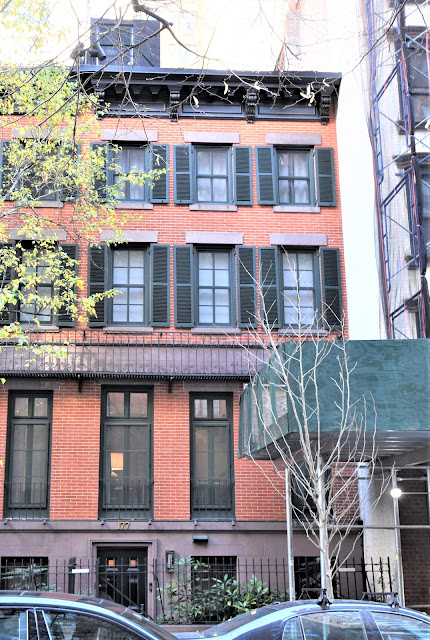 East 78th Street was opened in 1861, the year that war broke out in the South.  With much of New York City's working class off fighting, construction in Manhattan ground to a near halt.  But shortly after peace was declared in 1865, a flurry of building erupted, much of it on the developing Upper East Side.
In 1871 hardware merchant Augustus T. Chur moved his family into the recently completed brick house at 177 East 78th Street, between Third and Lexington Avenues.   One of a row of identical, 18-foot-wide homes, it sat upon a brownstone English basement.  Above the high stone stoop, the parlor level featured full-length windows that were almost assuredly fronted by a cast iron balcony.
The Chur family remained until about 1875, when Mary Sheehan purchased the house.  Her husband, John, had died and her adult sons, James and Philp, and daughter Margaret, lived with her.  But it was not a pacific cohabitation.   While James worked as a clerk in The Merchants' National Bank, Philip was a rake and slacker.
And on Christmas Day, 1877 Mary had reached the end of her patience.  The New York Times began an article saying, "A case of domestic infelicity--one in which the unfilial conduct of an undutiful son was the sole cause--was disclosed yesterday in the Fifty-seventh-Street Police Court."  Calling Mary "a well-to-do widow, being the owner of considerable property," the journalist said she complained that James "had not done a day's work in 12 years."  She went on to call him a habitual drunkard who came home "at all hours in the morning."  The article details his out-of-control behavior:

Often, when he came home after a night's carousal, if everything did not suit his fancy, or if his meals were not ready, he would vary the monotony of the scene by smashing the furniture in the house, demolishing tables, chairs, and, in fact, everything he could lay his hands on.

After Justice Wendell heard Mary's story, he asked Philip to explain himself.  He said his mother "neglected him and did not treat him as she should."  Wendell fined him $10 and "$300 bail to keep the peace" (about $7,650 today).  In lieu of bail Philip would spent three months on Blackwell's Island.
And as it turned out, James F. Sheehan was not a ideal son, either.  As Mary came out of the basement door on February 9, 1883, she found a young man ascending the stoop.   He handed her papers notifying her that she was a c0-defendant in an action filed against James by the bank.   Over the course of about a year, he had been embezzling funds and Mary was accused of having received at least part of the money.
In court Mary testified that she was unaware that any money given her by her son "had been obtained by him...by any fraudulent means whatsoever."    James's testimony could have been more forceful.  He said, "I never informed her, and I believe she was not aware" that the money was stolen.  In the end, James was sent to prison and Mary was cleared of any wrongdoing.
Mary lived on in the house through 1895, taking in a boarder, Dr. Charles L. Weiher, by 1893.  The house went through a quick succession of owners after Mary sold it to Edward and Ann Sturges in 1896.  They sold it two years later to George M. Harpel, who sold it to Lowenfeld & Prager the in 1902.  The real estate firm purchased 175 East 78th Street at the same time.  Before long the two houses were purchased by C. S. Falker, who now owned seven houses on the block.
Just before selling his properties in January 1911, The New York Times reported "A restriction for private residences has recently been put on several houses in East Seventy-eight Street."  The restrictive covenant in the deeds, which prohibited the properties from being used as multi-family homes, was no doubt an effort to preserve the property values of his other holdings.
The restriction did not prohibit 177 East 78th Street from being operated as a boarding house, however, and it filled with artists.  Among them were Rudolph Dirks, a member of the Association of American Painters and Sculptors; and German-born Henri de Mance, who lived and worked in the house for at least eight years. 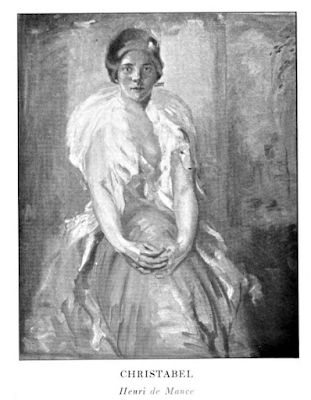 Henri de Mance exhibited this portrait at The Society of Independent Artists exhibition in 1917 while living here.  The Society of Independent Artists catalog 1917 (copyright expired)
By 1918 both houses were owned by John R. and Phyllis A. MacArthur.  They lived in 177 and leased 175.   MacArthur was described by The Evening World as the "millionaire treasurer of the MacArthur Bros Co...one of the largest general contracting firms in the world."  Living with the couple was their adult adopted son, Alexander, a self-described "sketch artist."
The MacArthur summer home was at Cedar Grove, New Jersey.  On September 17, 1921 a 19-year old student, Louise Bradshaw, was attacked by a man who jumped from the underbrush, threatened her with a knife, and assaulted her.   Less than a month later, on October 10, Helen O'Neill, a mother of five, was attacked in the identical fashion.  After a two-month investigation, police knocked on the door of 177 East 78th Street on December 5 and served Alexander with an arrest warrant.  He was taken to Newark to appear in a lineup.
The Evening World reported that the 29-year-old said, "This is a terrible mistake.  My name is in the Social Register.  I couldn't possibly do such a thing."   The New York Times added, "On the way down the stairs the prisoner was reported to have requested the detectives not to inform the servants in the house that he was under arrest 'until I find out what this is all about.'"
A few days before his arrest, Mrs. John Monroe had been attacked at Cedar Grove.  One of her two dogs bit the attacker and he ran away.  Her description of the attempted assailant closely matched MacArthur.  Police noticed that his left hand was bandaged.  He excused that saying it was a small pimple that he had picked which became infected and had to be lanced.  Both Louise Bradshaw and Helen O'Neill positively identified him in a lineup.
Surprisingly, both women changed their minds about being positive about MacArthur being their attacker, and he was cleared of charges.  But a year, later, on October 24, 1922, he was arrested again, this time in Central Park.  According to 27-year old Paul Dischleit, a baker, he had been playing with some kittens in the park when Alexander MacArthur "dropped on a bench beside him."  After talking for a while, MacArthur offered Dischleit a cigarette and suggested a walk.  When they reached Indian Cave, according to Dischleit, MacArthur acted "in an improper manner."  He found a policeman who arrested MacArthur.  He was found guilty of disorderly conduct and sentenced to three months in the workhouse.
The MacArthurs were undoubtedly mortified when Alexander was arrested, yet again, on June 6, 1923 and extradited to New Jersey.  Two more women now accused him of assault at Cedar Grove.
Despite the messy publicity, the MacArthurs seem to have kept up social appearances.  On April 15, 1924 the New York Evening Post reported, "Mrs. John R. MacArthur of 177 East Seventy-eighth street is giving a reception this afternoon for the Honorable Charles Barret, the French Consul General in the United States...There will be music during the afternoon and dancing for the young people."
In 1931 the German Graduate Nurses Society leased the two houses.  The New York Evening Post reported, "After alterations the nurses' society...will use the premises for clubroom purposes."  Although they were not joined internally, it was most likely at this time that the stoops were removed and the entrances lowers to the basement level.
The two properties were purchased in September 1946 by author John Steinbeck and his wife, Gwyn.  The couple moved into 175 and rented 177.  According to Bloom's BioCritiques's 2003 biography John Steinbeck, "They bought the two houses because the residences shared a garden, and Steinbeck wanted to control this space as well as control who rented the place next to them."  The novelist worked from the basement--now first floor--of 175 East 78th Street until the couple moved to California in 1948. 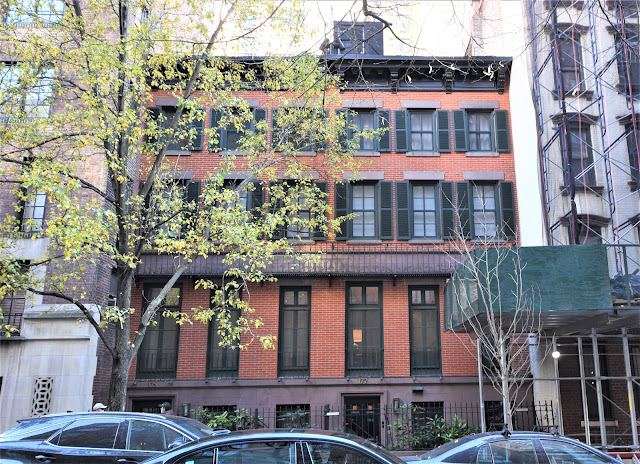 Although they shared the same owners for decades, the two identical houses were never combined.
In the mid-1990's the lower portion of 177 East 78th Street was home to the Gerald Peters Gallery, which specialized in American Modernism.  A renovation completed in 2012 returned the house with its astounding history to a single-family dwelling.
photographs by the author
no permission to reuse the content of this blog has been granted to LaptrinhX.com
Posted by Tom Miller at 1:07 AM