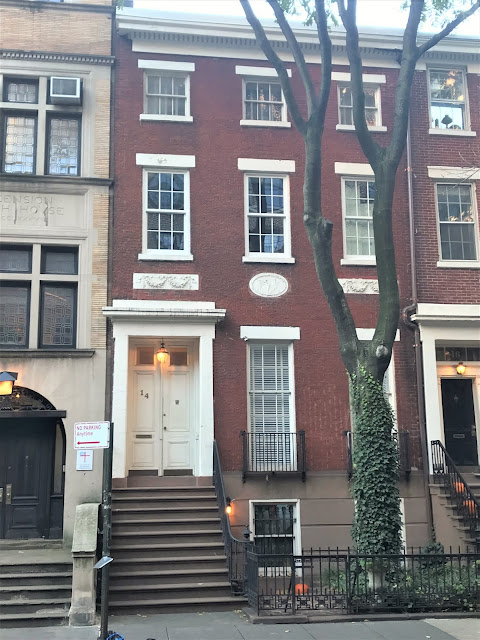 In 1844 Henry Brevoort, Jr. began construction on five identical brick-faced homes on West 11th Street, each a gift for one of his five daughters.  The handsome Greek Revival style residences were completed the following year.  Three bays wide and three stories tall, they had full-length parlor windows and delicately dentiled cornices.  The doorways included elegant sidelights and transoms.
It seems that Breevort (who died three years after their completion) intended the houses to be investment properties for his daughters, not their homes.  The unmarried girls, Elizabeth, Margaret and Constance, continued to live in the Brevoort mansion on Fifth Avenue, and Laura Breevort Bristed and her husband, Charles Astor Bristen, lived on the Hell Gate estate on today's Upper East Side.
The family of Jacob R. Pentz moved into 110 West 11th Street (renumbered 14 in 1853).   A well-to-do Platt Street merchant, he was president of the Empire City Bank and secretary of the Atlantic Insurance Company.
The servant in charge of watching over the Pentz's young son, most likely a nurse, was in deep trouble in 1850.  A notice in the New York Herald on September 9 read:

Strayed from his home, on the 8th instant, George W. Pentz, aged three and a half years; light complexion.  Any person giving information to his anxious parents, at No. 110 West Eleventh street, will greatly relieve them.

Little George was found, but the servant was no doubt soon looking for a new position.
In 1853 George F. Peniston leased the house for just one year.  The senior partner of the shipping firm Peniston & Co., he had an interesting background.  Peniston was born "on one of the Bermuda Islands," as worded by The New York Times, in 1826.  He came to America at the age of 14 and found a job as a clerk with a flour merchant.  He went on to become one of the original members of the Produce Exchange and the Maritime Exchange.  Peniston never became an American citizen.
Dentist Charles C. Allen and his family were the next occupants.  He and his wife, Mary, had a son, William H., who was also a dentist and was a partner in his father's practice.  Allen was a close friend of the socially prominent engineer and philosophy professor James Renwick, father of the esteemed architect.
Following the death of Charles Allen in March 1858, Mary sold the house to Mary A. Bissell Dodge, another fascinating figure.  In 1832, shortly after her marriage to William M. Dodge, her father, Peter Bissell, and husband formed a partnership, W. M. Dodge & Co. "for the manufacturing of brass nails."
It was a short-lived partnership.   The firm was in financial trouble that first year when William Dodge died.  The economic problems and the loss of his partner may have been too much for Bissell to handle.  On June 23 the New-York Evening Post reported that he had checked into the Fort Orange Hotel three weeks earlier, "and had drank excessively during the day yesterday."  He swallowed an ounce of laudanum, a tincture of opium used at the time by doctors as a pain killer.
The newspaper explained, "Mr. Bissell was under pecuniary embarrassment."  He left a note near the bed that read, "'Not of the Cholera. P. B."  The Greenfield Gazette & Franklin Herald snidely added, "Very considerate for a suicide."
Mary Dodge, who lost her husband and father within months of each other, was a resilient woman.  Now, moving into the West 11th Street house with her was her mother, Mary, and her sister, Sarah Bissell.  The women set up the dressmaking concern S. Bissell & M. A. Dodge in the house.
Dressmakers with patrons from the carriage trade made significant incomes.  And the West 11th Street house, just off fashionable Fifth Avenue, was a perfect location for the business.  Around 1868 another relative, Anna M. Bissell, moved in.  She was a teacher in the Girls' Department of School No. 45 on West 24th Street between Seventh and Eighth Avenues.
In 1872 the women left West 11th Street and Mary leased the house for two years.  Then, in June 1874, an auction of "the entire rich furniture throughout the house" was held.
The residence was operated as an upscale boarding house for several years.  In 1876 the three boarders were Charles Piegne, a feather merchant; milliner Jane Vainy; and Martial G. Jouffret, whose profession was listed as "hair."
Around 1891, 14 West 11th Street once again became a private residence, home to importer Edward R. Biddle and his family.  The Fifth Avenue wedding of Edward R. Biddle and Harriet Whitney Wilmerding on November 21, 1871 had been a social event.  The couple had three daughters, Harriett (known at Hattie), Christine and Edna.
The 1890's saw a surge of interest in things Colonial across America.  Houses were being designed in neo-Federal, neo-Georgian, and Colonial Revival styles.  No. 14 West 11th Street was given a Federal update.  The Greek Revival entrance was replaced with a simpler, double-doored version, and swagged stone panels and an oval plaque were installed on the facade below the second floor.

The Biddle house was the scene of entertainments throughout the years, but none more important that the debuts of the girls.  The first to be introduced to society was Hattie, in October 1894.
Christine was next.  On December 5, 1897 The Argus reported, "A New York social event of interest to Albany society folk was the formal introduction to society of Miss Christine Biddle...which took place Monday afternoon from 4 to 7 o'clock."
It would be a full decade before Edna was of age to make her debut.  On December 7, 1907 The New York Times reported, "To introduce her daughter, Miss Edna Biddle, Mrs. Edward R. Biddle gave a reception yesterday afternoon at her home, 14 West Eleventh Street."
With their daughters grown, the Biddles moved on, leasing the house by 1916.  Ten years later the Biddle estate sold the house to Lawrence Langner and his second wife, Armina Marshall.  The couple maintained a country home near Westport, Connecticut. 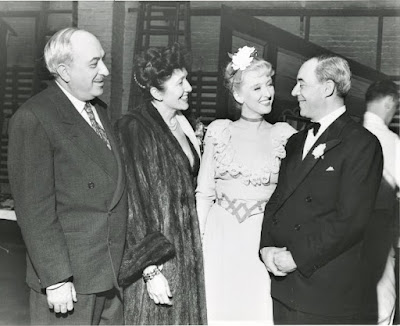 The Langlers (left) chat with Celeste Holm and Richard Rodgers backstage at the 2,000 performance of Oklahoma! in 1947.  from the collection of the New York Public Library
Langler was a patent attorney and he and Armina had one child, Philip.  The couple was highly involved in the theater.   Lawrence was one of the founders of the Washington Square Players in 1914, and in 1919 he founded the Theatre Guild.  Additionally, he founded and was chairman of the American Shakespeare Festival.  He and Armina established and ran the Westport Country Playhouse, where Armina sometimes acted.
On New Years Eve 1939, Lawrence Langler's daughter by his first marriage, Phyllis, was  married to John Cornell in the Church of the Transfiguration--the "actors' church."  Cornell was involved in the management of the Westport Country Playhouse.  The reception was held at 14 West 11th Street and among the guests were American theater legends Lillian and Dorothy Gish.
In the early 1950's playwright, screenwriter and producer Robert W. Anderson and his wife, theatrical agent Phillis Stohl Anderson lived here.  Anderson recalled in a letter to the editor of The New York Times in 2000, "I wrote part of 'Tea and Sympathy' at this address, and some of the 'Theater Guild of the Air' scripts I wrote before 'Tea and Sympathy' was produced in 1953." 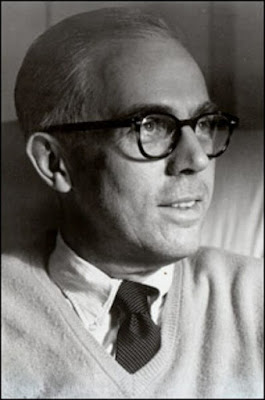 Phyllis died in 1956.  Anderson would receive two Academy Award nominations--for the 1959 film The Nun's Story, and the 1970 I Never Sang for My Father.
Renovations completed in 1979 resulted in a duplex apartment in the basement and parlor floor, one apartment on the second, and another duplex in the third floor and new penthouse level, unseen from the street.
photographs by the author
no permission to reuse the content of this blog has been granted to LaptrinhX.com
Posted by Tom Miller at 1:23 AM