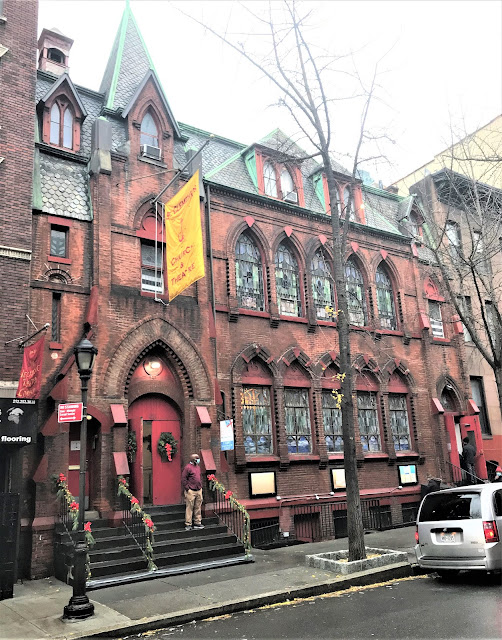 Founded in 1829, the West Presbyterian Church was located in Greenwich Village.  In 1866 the congregation established a reformed church mission in the crime-ridden, dangerous district known as Hell's Kitchen.  Four years later, in November 1870, Edward Delano Lindsey filed plans for a "three-story brick chapel" on West 46th Street, between Ninth and Tenth Avenues.  (The fledgling architect, a graduate of Harvard, had been in practice only three years.)

His delightful Ruskinian Gothic style structure could have inspired cartoonist Edward Gorey a century later.  The asymmetrical design with its surplus of pointed-arched openings forewent expensive stone trim, yet Lindsey's use of creative brickwork, fishscale slate tiles, and ample stained glass more than made up for it.
The 26-year old Rev. James Hart Hoadley, was appointed Faith Chapel's first permanent pastor in 1873.  Having grown up in the quiet village of Collinsville, New York, the impoverished, gang-ridden Hell's Kitchen neighborhood must certainly have been both challenging and intimidating to him. 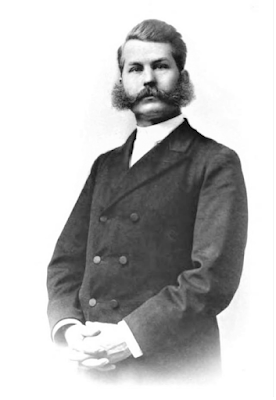 Rev. James Hart Hoadley, The Hoadley Genealogy, 1894 (copyright expired)
But, however daunting his work, he prevailed.  On January 21, 1877 the New York Herald wrote:

Faith Chapel, a mission of the West Presbyterian church of this city, under the pastorate of Rev. J. H. Hoadley, has been very successful during the year 1876.  Its membership has been increased by 139, and now numbers 350 souls, and its Sunday school numbers nearly 1,000 scholars, 67 of whom were added during the year.  The religious interest is increasing.

Hoadley's success was such that on November 12, 1883, ten years after he took the pulpit, the Presbytery of New York "decided to organize Faith Chapel, at No. 423 West Forty-sixth-st., into a Presbyterian Church," as reported by the New-York Tribune the next day.  It was now known as Faith Presbyterian Church.  The New York Times reported, "The West Presbyterian Church, to which the chapel belongs, will rent it to the congregation for $10 a year, and if it prospers will make it a gift to the new congregation."
At the time, the membership had grown to 560, severely taxing the viability of the building designed for around half that amount.  On May 10, 1897 the New-York Tribune reported, "The congregation Faith Presbyterian Church, which formerly was situated in Forty-sixth-st., west of Ninth-ave., opened their new house of worship in Forty-eighth-st., east of Ninth-ave., yesterday."
The 46th Street church did not sit vacant for long.  On June 7, 1897 The New York Times reported:

The congregation of the Protestant Episcopal Church of St. Cornelius, which has grown out of the chapel connected with the Church of Zion and St. Timothy, and been recently incorporated as an independent parish, held the opening services yesterday in their new edifice, 423 West Forty-sixth Street.

The article noted that, "There is also a well-fitted basement which may be used for Sunday school and lecturing purposes."  Weekly lectures became a staple at the Church of St. Cornelius, very often addressing issues of interest to the hard-working neighborhood residents.  On February 27, 1898, for instance, Robert L. Harrison spoke on "The Condition of the Workingman One Hundred Years Ago and Today." 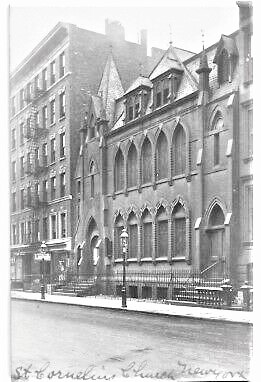 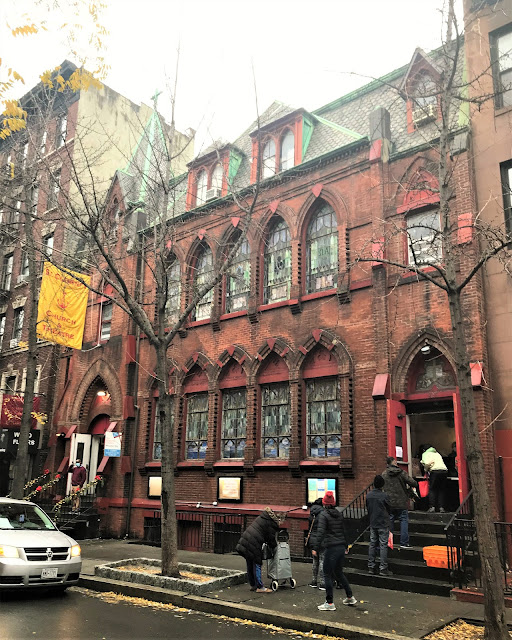 But drama continued at St. Clements with its weekly "Mass in the Theatre," the Cornerstone Theater Company and, later, the Saint Clements Theatre.   Today the congregation describes itself as one "that has always celebrated the ministry of women, of gay and lesbian people, and those of all walks of life; a longtime center of service to the poor, celebrating social activism and creative liturgy," and "one of the most diverse Episcopal parishes in New York City."
photographs by the author
LaptrinhX.com has no authorization to reuse the content of this blog
Posted by Tom Miller at 1:10 AM