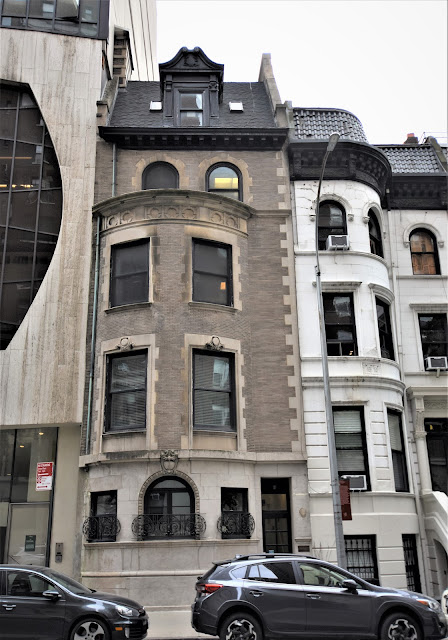 The original arched doorway has been converted to a window, while the former service entrance now functions as the door.
Clarence F. True started his career in the office of esteemed architect Richard M. Upjohn.  When he struck out on his own in 1884 the Upper West Side was emerging as Manhattan's newest residential frontier.  True would be responsible for scores of houses and commercial buildings, rarely working elsewhere in the city.
In 1897 he was hired by E. L. Schiller's Metropolitan Improvement Co. to design seven 20-foot-wide houses stretching west on West 81st Street from the corner of West end Avenue.  Before construction was completed, in March 1898, Schiller and True joined forces to create the Riverside Building Company with True as president.  The new firm would finish the project.

On September 22, 1898 The New York Times reported that Clarence True had sold 304 West 81st Street "for about $34,000."  (That amount would top $1 million in today's money.)   The western-most of the row, it, like the others, was five stories tall.  Its American basement plan forewent the high stoop that was rapidly losing favor.  True, known for his working in historic styles, designed the house in his take on the Elizabethan style.  The arched entrance was centered in a three-story bowed bay.  Above the limestone base the facade was clad in beige Roman brick and trimmed in limestone.  A single dormer with a swan's neck pediment graced the mansard roof.
The home's owners were David Seymour Willard and his wife, the former Amelia Bowers.  The couple had married in Brooklyn in 1878 and had two children, Amelia, born in 1880, and Henry Bowers, born in 1881.  Willard was a member of the brokerage firm, Lapsley, Field & Company.  (One of his partners was Cyrus West Field, who was greatly responsible for laying the Transatlantic cable in 1866.)
Following Amelia's marriage to Robert Peck in 1901, her parents were mostly alone in the house with their servants.  Howard entered Harvard that year, studying to become an architect.
The Willard summer home was on Hunter's Island, New York.  Following Howard's graduation in 1905, the family closed the townhouse for the summer season.  Often well-to-do families left a live-in servant behind to watch the house.  But Albert Banks, who lived in a fine home just a block away on West 81st Street, agreed to check on the house each day.  Banks had worked for Lapsley, Field & Company since 1899 and he and Willard were well-acquainted.
Banks checked the house just before midnight on August 30 and found everything in order.  But then, according to The Sun, "Next morning he returned to find the place turned up by the roots."   The World reported:

Half the furniture throughout the house was turned upside down.  The hall way at the entrance to the house was littered with furniture and draperies.  Running upstairs, he found that the burglars had gained an entrance to the house by smashing in the skylight...From rooms on the lower floors the thieves took rugs, paintings and small pieces of furniture and bric-a-brac.  They did not bother with the silver plate in the dining-room.

Suspicion fell on a servant.  The Sun reported on September 3, "It has rather the look of an inside job."  Police noted that there were several trunks in the basement, one of which belonged to Willard's mother and only it contained jewelry and furs.  That trunk was broken into while the others were ignored.  It is unclear whether the perpetrator or his accomplice was caught.
Amelia's marriage did not last and she was quietly remarried in the West 81st Street house to Robert White Conrow on May 6, 1908.  A simple one-line announcement appeared in the society columns.
Around 1914 the Edward Davis family moved into 304 West 81st Street.  Davis and his wife, the former Wilma Wise, had two children, Aaron W. and Ruth M. Davis.  Ruth had graduated from Barnard College in 1913.
Davis was president of the cotton goods manufacturing firm Davis & Catterall.  He had co-founded it in 1897 with Adam Catterall.  Active in the Jewish community, he was a founder of the Free Synagogue on West 68th Street in 1906, and was a member of the exclusive Harmonie Club.
Ruth's engagement to Maxwell Steinhardt was announced in December 1915.  The wedding took place in the 81st Street house on June 5 the following year.
A much more somber ceremony took place in the drawing room the following year.  Wilma's father, Rev. Dr. Aaron Wise, had been rabbi of Temple Rodeph Sholom.  Her widowed mother, Sabine de Fischer Wise, died at the age of 81 on November 29, 1917 and her funeral was held here.
Two weeks later the family's name appeared in newspapers again.  The Davises' chauffeur turned the corner of Eighth Avenue and 44th Street and hit a popular actress.  The Dramatic Mirror reported on December 15, "Mrs. Harry Clay Blaney, professionally known as Kitty Wolfe, was run down by an automobile...last week and severely injured."  The chauffeur had driven her to her home where she remained under the care of a doctor.
In October 1933 the Davises leased the house to "a doctor," according to The New York Sun.  The New York Evening Post added that he "plans to redecorate the house before occupying it."  Redecorate he did.
It became home to the Hamilton Institute, established in 1892.  On July 27, 1935, the New York Post note that the school "has enjoyed years of successful intensive preparation for admittance to leading colleges in the United States."  Describing the school's location as being "in a very accessible portion of the city, away from all the downtown heat, noise and turmoil," the article said that students received "almost individual intensive instruction and preparation."
The Davises retained possession of 304 West 81st Street.  In July 1939 they leased it to S. Bossack who announced plans to renovate it.  Edward Davis died at the age of 75 on May 28, 1942.  Five years later the West 81st Street house was renovated to apartments, one per floor.  It was no doubt at this time that the former entrance was converted to a window to provide more interior square footage. 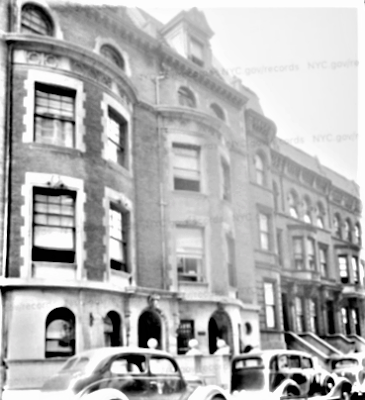 A year before the conversion, the centered entrance was intact.  302 East 81st Street, a near match, is to the left.  via NYC Dept of Records & Information Services
But major change would come in 1982 when the house was purchased by internationally famous English singer, songwriter, actor, film producer and co-founder of the Rolling Stones, Mick Jagger, and his model girlfriend Jerry Hall.   Jagger had it returned to a single family home.  In his 2009 book, Under Their Thumb, Bill German wrote, "Mick had hoped he could move in quietly, but a deranged groupie graffitied the front wall, 'Jerry Hag Hall pant pant filth filth,' it said.  If the yentas at Zabar's deli counter didn't know who their new neighbor was, they knew it now." 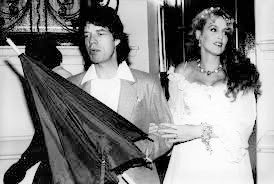 On July 26, 1985 Mick Jagger and Jerry Hall were photographed as they  left 304 West 81st Street headed to his birthday party at the Palladium nightclub.  photo by Frankie Ziths
The couple were married in an unofficial private ceremony in Bali, Indonesia on November 21, 1990.  (The marriage was declared "invalid, unlawful, and null and void" by the High Court of England and Wales in Britain in 1999.)   In his 1993 New York City Starwalks, Larry "Wolfe" Howitz wrote, "Don't be shocked if you see Mick Jagger and Jerry Hall on the Central Park bridle path.  Mick and his glamorous wife enjoy Manhattan's finest pleasures, including horseback riding, clubs, and lots of shows.  Most of his friends in town are ordinary nine-to-fivers."
When Mick Jagger purchased 304 West 81st Street, it was the last house to survive of the 1898 row.  The others had been demolished around 1975 to make way for the Calhoun School.  The institution purchased 304 West 81st Street from Jagger in 2001 for use as an administration building.  Happily, it now sat within a historic district, which precluded the school from demolishing it as it had the others along True's row.  An interior renovation completed in 2008 resulted in offices throughout the building.
photograph by the author
LaptrinhX.com has no authorization to reuse the content of this blog
Posted by Tom Miller at 1:42 AM