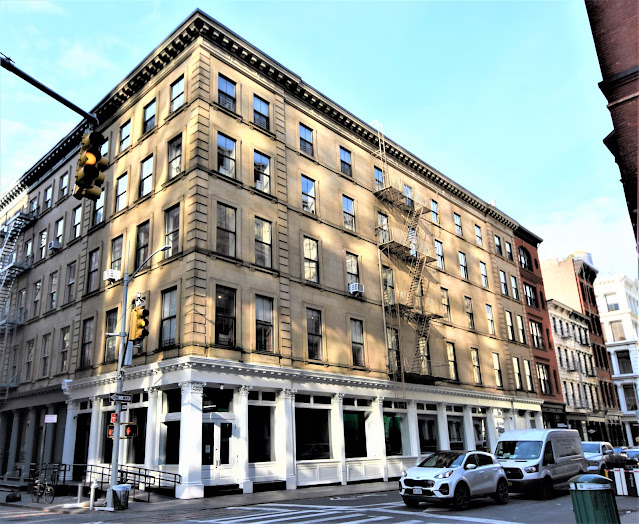 In the 1850's, the neighborhood of Mercer and Green Streets--once lined with respectable private homes--had  gained the reputation of Manhattan's most notorious red light district.  But that began to change at the end of the Civil War.  As commerce inched northward, modern commercial buildings replaced the Federal style houses of the 1820's.
Amos R. Eno was among those transforming the district.  In 1867 he erected two large loft and store buildings at the southwest corner of Mercer and Grand Streets.  The same architect was doubtlessly responsible for both 31-33 Mercer Street and the corner building, 35 Mercer; their facades being nearly identical. 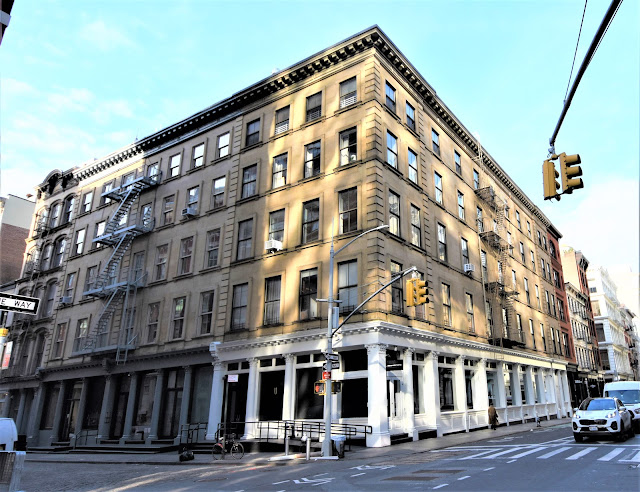 The identical elements of the two facades create the illusion of a single building.
Like its fraternal twin, 35 Mercer Street was five stories tall and faced in sandstone above a cast iron base.  Its prim Italianate design featured quoins that separated it and 31-33 Mercer, and created two-bay-wide vertical sections on either end of the Grand Street elevation.
The ground floor store became home to the auction rooms of Richard Walters.  His sales liquidated a wide variety of merchandise.  On Friday, July 31, 1868, for instance, he sold "a large and general assortment of Parlor, Reception Room, Dining and Chamber Furniture, Bar Furniture, and Glassware."  Included were items like a "superior seven octave rosewood Piano," French plate glass mirrors, oil paintings, and carpets.
The upper floors were leased to the wholesale drygoods firm Treadwell, Taylor & Co.  They were nearly the victims of slick conmen on February 14, 1870, saved only by the sharp instincts of two policemen.  Charles Wilson and Edward Hale strode into the store carrying a "new and large valise securely strapped," as described by The Evening Post.  They identified themselves as "Western merchants, desirous of purchasing silks and dress goods."
The clerk brought various samples of materials, repeatedly turning his back on the well-dressed buyers as he did.  When he was not looking, one of the men pushed a button on the valise, which popped a spring catch and opened the side of the case.  Pricey fabrics were then stashed inside.  When pushed closed, the valise appeared to be securely strapped.  The Evening Post said, "The theft was  accomplished so adroitly that it did not attract the attention of the persons in the store."  But what the crooks did not know was that two policemen were waiting for them on Mercer Street.
The New-York Daily Tribune explained, "Detectives Casey and Quinn of the Broadway squad yesterday saw Charles Wilson and Edward Hale, well-known shoplifters, in Mercer-st.  One of them carried a large leather valise, and the officers, believing that the thieves were on a professional tour, they followed."
The pair had chosen 24 pieces of various goods, told the clerk they would return later to pay for the items and advise where to have them sent.  They then walked out of the building to encounter Casey and Quinn.  At the station house the valise "was found to be of novel construction," said the New-York Daily Tribune, which detailed the secret latch.  Inside were two pieces of brown silk, valued at $150 (more than $3,000 today).  The Evening Post added, "The police think this the most dangerous appliance yet introduced to aid shoplifters, and storekeepers are warned against persons who carry large securely-strapped valises."
Treadwell, Taylor & Co. was replaced in 1871 by Dreyfus, Kohn & Co., importers of apparel and millinery trims.  The location, quickly becoming the center of Manhattan's garment district, was well-suited for the firm. 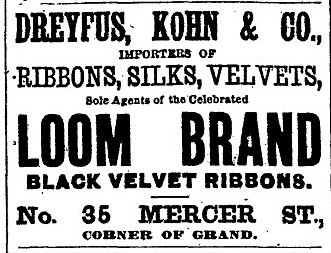 The Evening Post, January 25, 1871 (copyright expired)
Dreyfus, Kohn & Co. was established in 1858 by Isaac E. Dreyfus, Aaron Kohn and G. Rosenblatt.  The year 1885 was a tragic one for the company, with both Dreyfus and Rosenblatt dying.  Kohn brought Rosenblatt's son, Moses G. Rosenblatt, into the firm.
The Financial Panic of 1893 hit Dreyfus, Kohn & Co. hard.  The company's troubles were increased when Aaron Kohn became ill in March 1896 "and was obliged to give up his work and take a trip to Jamaica," according to The New York Press.  Upon his return, the decision was made to close the company, described by the newspaper as "one of the oldest and most prominent in the trade."
The stress of closing the firm his father had helped found may have contributed to the death of Moses G. Rosenblatt.  The 48-year-old died on August 14, two weeks after business was suspended.  The New York Times said, "Mr. Rosenblatt worried greatly over the business embarrassments of the firm, and he was, in addition, prostrated by the heat on Saturday."
Amos R. Eno died on February 21, 1898.  At the time of his death his real estate holdings were valued at around $20 million--nearly $645 million in today's dollars.  A massive auction was held in February 1899 during which Leon Tanenbaum paid the equivalent today of $3.72 million for 35 Mercer Street. 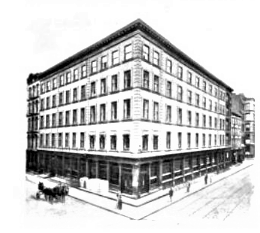 from New York--The Metropolis, 1902 (copyright expired)
The building became home to William Openhym & Sons, another wholesale drygoods firm, founded in 1853.  The firm was reorganized in 1892 following the death of William Openhym and was now conducted by brothers, William, Adolphe, Joseph and Emile.
Adolphe was the senior member of the firm and a member of the Chamber of Commerce.  The New York Press described him as being "prominent in business and club life...He was a member of the Reform Club, City Club, National Arts Club and the Nineteenth Century Club."  He and his wife and two children lived in a handsome mansion at 352 Riverside Drive between 107th and 108th Streets.
Each morning Adolphe rode in Riverside Park before heading downtown.   On Monday morning, March 30, 1903, according to The New York Press, "He returned in good spirits and passed a joke with his groom as he threw him the reins of his saddle horse.  After staying in the house a few minutes, Mr. Openhym walked briskly toward the north."  He was not seen again.
Openhym never made it to work that day.  An hour after he left the house, Frank McConville, the keeper of the High Bridge, saw a man stop in the middle of the bridge and take his hat off.  McConville shouted for him to move on, but instead the  man climbed to the railing and threw himself over.  McConville ran to the spot where the man's hat and umbrella lay.  They were identified by Emile Openhym as belonging to his brother. 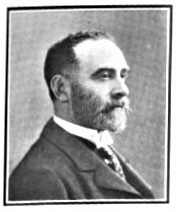 Adolph Openhym, from New York--The Metropolis, 1902 (copyright expired)
Suicide was scandalous and shameful (and illegal) and neither the family nor the firm would admit to the possibility.  A member of the company said, "If he absolutely was seen to jump from the High Bridge into the Harlem River, I can only believe he had gone to the bridge for an extra breath of fresh air, and suddenly attacked by vertigo, toppled over into the river."  (Why he would have gone north after leaving home, rather than south, was not addressed.)
Openhym's body was not discovered until April 26.  His funeral was held in the Riverside Drive house three days later.  The 49-year-old millionaire received his final humiliation on May 2, when The New York Press entitled an article, "Declares Openhym Was Insane," and reported that Coroner Scholer ruled he had taken his life "while suffering from temporary mental aberration."
William Openhym & Sons continued on at 35 Mercer Street until 1912 when it moved north to the newly-completed Emmet Building at the southeast corner of Madison Avenue and 29th Street.  The Soho building continued to house apparel-related firms for decades, like the Manhattan Silk Company and the Rossie Velvet Company. 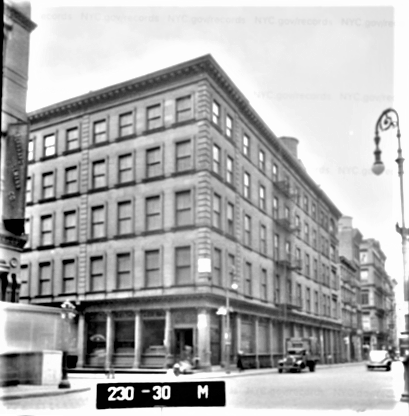 Unlike today, traffic at the intersection of Mercer and Grand Streets was essentially non-existent in 1941.  image via the NYC Dept of Records & Information Services
Major change to the Soho district came in the third quarter of the 20th century, as artists discovered the gritty area.  Storefronts became galleries or trendy cafes and shops, and vast lofts, formerly home to garment manufacturers, were converted to studios.  Among the pioneers in the movement was 35 Mercer Street.  A renovation completed in 1978 resulted in "joint living-working quarters for artists" above the store level--two on the second floor and one each on the upper floors.  Among the initial residents was architect Walter David  Brown.  The Department of Buildings stressed, "At least one occupant of each apartment shall be an Artist certified by the New York City Department of Cultural Affairs." 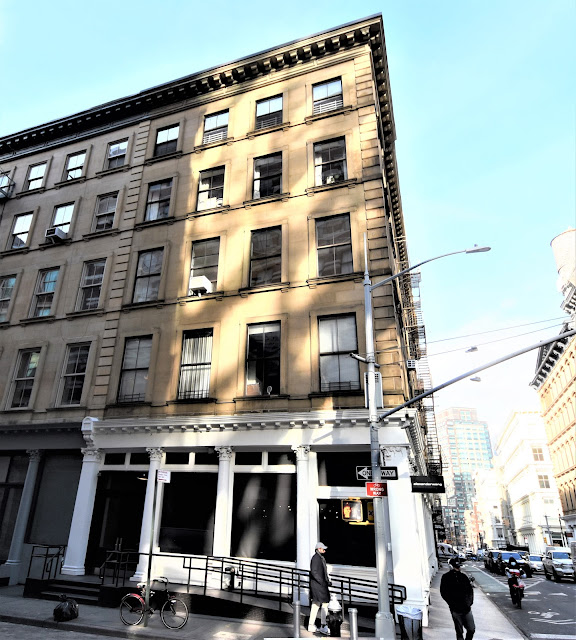 A subsequent renovation resulted in two artist lofts each on all the floors.
photographs by the author
many thanks to Marian Scheuer for requesting this post
LaptrinhX.com has no authorization to reuse the content of this blog
Posted by Tom Miller at 1:57 AM