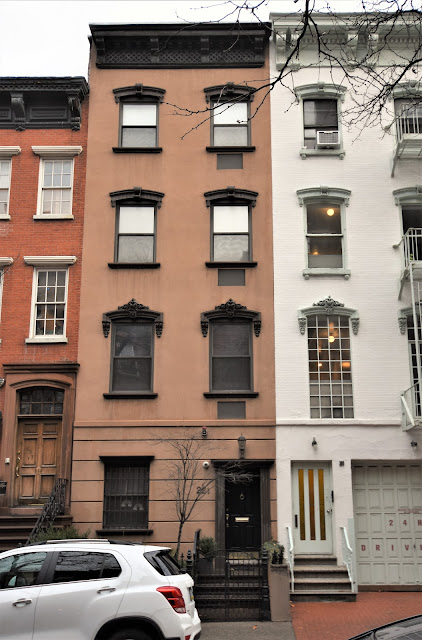 Constantine Adamson was 21 years old in 1805 when he became an apprentice in a London apothecary shop.  After first immigrating to Canada, he arrived in New York in 1817.  The following year Richard Seaman took him in as a partner in the Walters & Seaman pharmacy.  His son, Cuthbert, entered the business in 1821.
The American Journal of Pharmacy said, "His store became the resort of physicians of his vicinity, who, with great reason, placed entire reliance on the quality of his materials, and the skill, ability, and exactness of their preparation."  Constantine was a founder of the College of Pharmacy in 1829 and was elected its president in 1835.  The Journal reported, "On Saturday at 15th of August [1846], he was taken with a severe inflammation of the bowels, in consequence of a hernia which he had long been trouble."  He did not survive the infection.
Cuthbert (who was named for his paternal grandfather, a captain in the English navy), and his mother, Christina, lived at 699 Broadway at the corner of 4th Street at the time.  In 1858 they moved into the newly built house at 133 East 31st Street (renumbered 221 in 1868).  One of four identical homes, it was designed in the emerging Ango-Italianate style.  Short stone stoops led to the single-doored entrances.  The eye-catching cast iron lintels of the second floor windows set the design apart.  Their frothy French-inspired brackets and keystones reflected the domestic tastes of the 1850's. 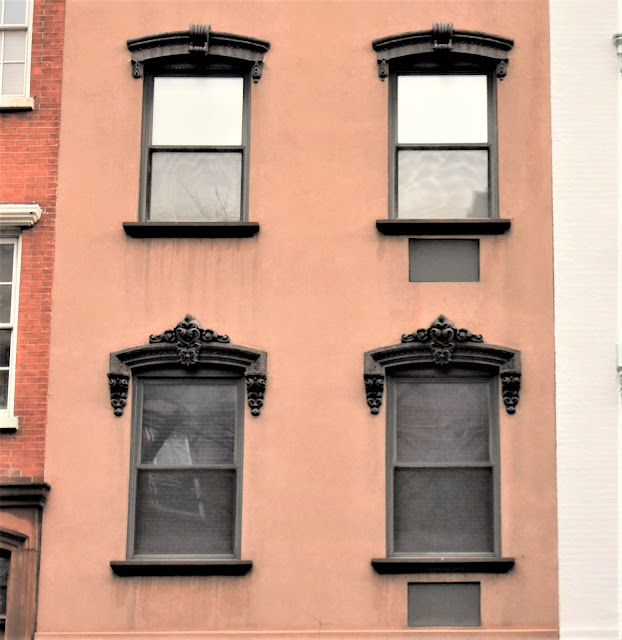 The Adamsons' residency was short.  They seem to have moved permanently to their summer home in Fordham, New York in 1860, where Cuthbert A. Adamson died on June 21, 1863.
The East 31st Street house became home to the James H. Stevens family.  Stevens and his wife, Mary, had three daughters, Isabella, Mary V. and Charlotte (known as Lottie); and a son, James, Jr.  Stevens ran a large apparel factory at Bowery and Division Street.  While James, Jr. joined his father's business, his sisters were teachers.  Isabella taught in the girls' department of School No. 7 on Christie Street, and Mary was a teacher in the boys' department Primary School No. 1.
The size of Stevens' business was evidenced in a help-wanted ad in 1862:

It was most likely James, Jr. who placed the advertisement.  His father had been ill for some time, and on November 7, 1862 The New York Times reported he had died the previous day "after a long and painful illness."  He was 57 years old.
Shockingly, exactly two weeks later to the day, Isabella was married to William F. Geisse.  What must have been viewed by some as an appalling breach of social protocol and mourning, may have been prompted by the ongoing Civil War.  The groom was a lieutenant in the Union Army and the couple may have hurried to marry before he was sent South to fight.
Mary V. Stevens was married to John Higgins on August 2, 1865.   Two years later, on December 12, 1867, Lottie married Thomas Colvin Smillie.  Her life was destined to be tragic.  When Thomas died on April 30, 1870 at the age of 35, Lottie had just become pregnant with their only child.  She named the baby, which was born in 1871, Thomas Colvin, after his father.  The infant died two days after birth.
In the meantime, James M. and Rosanna McCaffil Chichester had moved into 223 East 31st Street in 1867.  The couple had a teenaged son, William Rockwell, born in 1850.  Chichester was a tobacco merchant whose business was located at 51 Bowery.
The family took in two boarders.  Elizabeth Berrian, a widow, and Dr. Joseph D. Bryant, were rather long-term renters, listed with the Chichesters from 1871 through 1874.  It may have been the physician's influence on young William that prompted him to pursue a career in medicine.  Following Bryant, another physician, Dr. Joyce, took a room.  He lived with the family at least from 1875 through 1877.
In 1879 William Rockwell Chichester graduated from the New York University College of Medicine.  During a deadly heat wave two years later, The New York Times reported on July 1, 1881 that he was one of 50 physicians appointed "for service among the tenement-house population during the heated term."  His compensation for the five-week period would equal about $2,600 today.
The Chichesters sold the house on September 30 that year to Ephraim S. Widdemer for $8,300 ($217,000 in today's money).  Widdemer leased it to James Conolly Christie and his wife, the former Sophia Emma Brown.  The couple welcomed a daughter on January 2, 1883.
A household auction was held in the house on March 27, 1889.  The items sold reflected the still upscale tenor of the residence, among them a rosewood piano and "black walnut chamber suites."
No. 221 was now operated as a boarding house, operated by Maria Flynn.   Her boarders were almost all Irish immigrants.  One of them was looking for employment in October 1891.  Signing his advertisement with his initials, D. H., he wrote:

Waiter or Second Man -- By a young man in a private family; just disengaged; best city reference; last employer can be seen.

A waiter, in this sense, was a domestic servant who served in the dining room or drawing room; while a second man assisted the butler in serving breakfast, helped with trays and tended to silverware.  The fact that his former employer was available for in-person references attested to his performance and the genial parting of ways.
In the summer of 1892 Europe was suffering a crippling cholera epidemic and many Americans feared it was only a matter of time before it arrived here.  As a precaution, Governor Roswell P. Flower authorized the purchase of the Surf Hotel on Fire Island to be used as a quarantine station for infected passengers of incoming ships.
But not even that drastic move could keep the disease out of the city.  In the fall a ship from Hamburg arrived with infected passengers who slipped through.  On September 17, 1892 The Press reported, "Mary Connerty, 19 years old, a domestic employed at No. 221 East Thirty-first street, was taken ill at her place of employment Wednesday evening...Dr. C. J. Kane of No. 673 Second avenue pronounced her case cholera, and she was removed Thursday afternoon to the Floating Hospital at the foot of East Sixteenth street."
Maria Flynn had hired Mary seven weeks earlier.  The Rome [New York] Semi-Weekly Citizen said, "Miss Conity [sic] came to this city from Ireland six months ago...She was taken ill at 9 o'clock and by midnight the entire household was excited at the girl's condition."  Immediately after Mary was taken away, the house was fumigated and disinfected.  The article said, "everything with which she had come in contact [was] destroyed."  Furthermore,  five days later, The Press reported that Maria Flynn's boarding house had been placed in quarantine.
The house was sold in an executor's sale on February 27, 1895.  It continued to be operated as a boarding house, now run by a Swedish immigrant, Ida Bjorn.  Not all her tenants were upstanding.
On November 6, 1899 John H. Bjorlin went to the notorious saloon of Jack McManus on 30th Street and Sixth Avenue.  McManus, known as "Eat 'Em Up," was an infamous gangster, once second in command of the Five Points Gang.   Bjorlin went to police and said that five men had stolen his watch and $35 at the saloon.  In court two days later, the men were discharged by the judge, The World explaining, "Bjorlin was told he deserved what had happened to him." 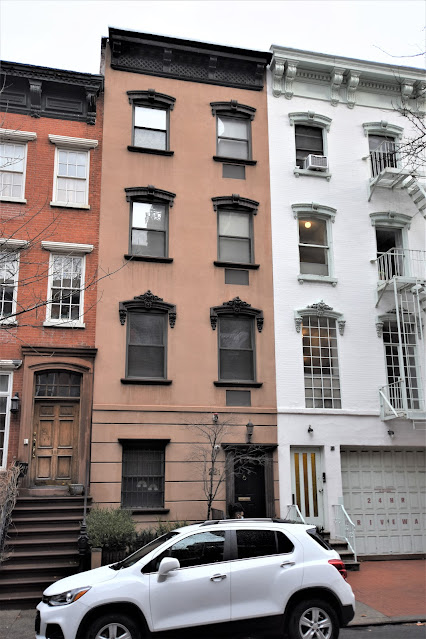 Another Scandinavian immigrant boarding here was Andrew Gustavenson, a Swedish cabinetmaker.  Although he was married, his wife was estranged and living in Brooklyn.  His troubles continued when the 47-year-old lost his job early in 1899.  He fell behind on his rent, and pawned his woodworking tools.  When he found work in a piano factory in March, Ida Bjorn loaned him $4 to get them back.
Then, two weeks later, on April 12, he came home drunk at around 4:00 in the morning.  The Evening Telegram said, "As he was abusive while in that condition the landlady said nothing to him, and he went to his room."  The following morning Ida Bjorn smelled gas outside his door and used her passkey.  "She found Gustaveson undressed and in bed, with a gas tube in his mouth.  He had pulled the pillows and bedclothing around his head so that none of the gas might escape."
Another of Ida's boarders appeared in court that year.  Edward Warren was a self-declared advertising agent.  In fact, he was a slick con artist.  He printed tickets inscribed, "Twelfth Annual Ball of the Dry Goods Clerks of New York, at the Grand Opera House, on Feb. 28."  Then, posing as an employee of B. Altman & Co., went to ladies' tailoring and dressing making shops and sold them.  He was eventually arrested, according to The Morning Telegram on February 6, 1899, "for selling bogus tickets for an alleged ball and thereby fleecing hard working dry goods clerks and cash girls."
Throughout the next decades 221 East 31st Street continued as a boarding or rooming house.  Then a renovation completed in 1959 resulted in a triplex in the basement through second floors, and a duplex on the top two.  That configuration lasted until it was returned to a single-family home in 2003. 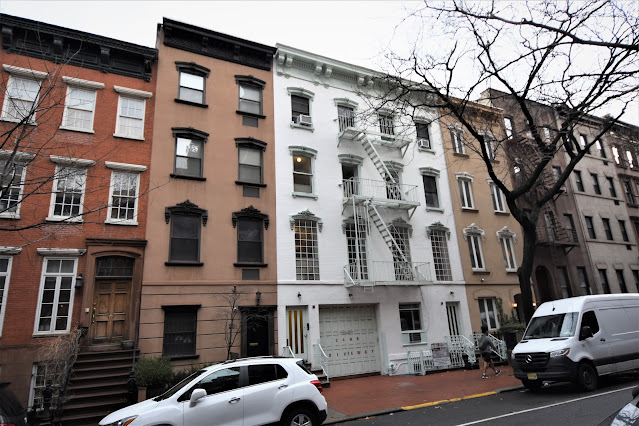 Outwardly, the Adamson house is the best preserved of the row.  And those striking cast iron lintels make a detour down East 31st Street worthwhile.
photographs by the author
many thanks to reader Ted Leather for prompting this post
no permission to reuse the content of this blog has been granted to LaptrinhX.com
Posted by Tom Miller at 1:22 AM