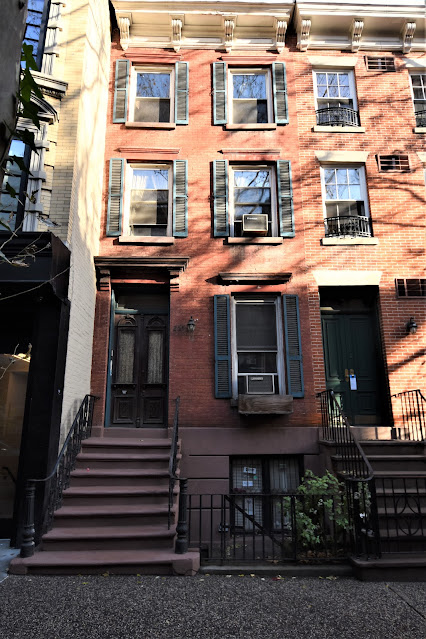 In 1867 the Italianate style house at 255 East 78th Street was home to broker Joseph Zuckermann and his family.  His skinny home--just 13-feet-wide--was recently completed, one of a long row of identical, three-story brick-faced residences.  A brownstone stoop rose to the double-doored entrance below a molded cornice.  Each house had its own prominent cornice supported on scrolled brackets.
Zuckermann was among the many German-born citizens who had begun populating the burgeoning Yorkville district, the first arriving around 1850.  His daily commute to his office at 19 Wall Street would have been on the Second or Third Avenue streetcar, since the first subway would not arrive in Yorkville until the end of 1878. 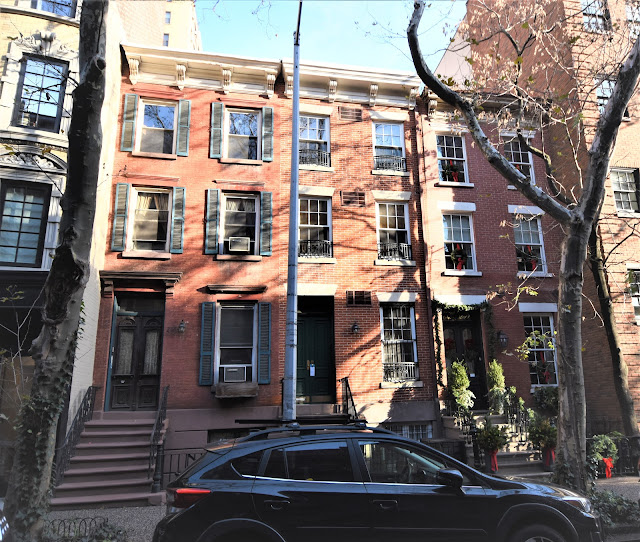 The narrow house saw a rapid succession of German-born owners and occupants.  In 1870 John Klenner, a carpenter and joiner, lived here.  He sold it on August 1, 1874 to Isaac Kraus for $9,000--about $211,000 today.  Kraus purchased it as an investment property, renting it at the equivalent of $1,500 per month in today's money.
His tenants, the Meyer family, would remain through 1882.  Isaac Meyer was a box manufacturer, with offices at 59 Hudson Street.  His wife, Babette, was no stay-at-home housewife.  She was listed in directories as his partner in the business.
The house was sold to A. Alborn in December 1882 for $6,200.  He quickly resold it to Louis and Barbara Wirth.  They, too, would not remain especially long, selling it to Bertha Herbst on April 12, 1886 for $8,000 (around $275,000 today).
The first owner not of German descent was John Gilmore Boyd, whose family moved into 255 East 78th Street in the early 1890's.  Born in Ireland on June 18, 1840, Boyd was educated at McGill College in Montreal, Canada, and the University of the City of New York.  He had married Carrie Edith Southwick on June 16, 1869.  The couple had two children, Francis T. and Caroline E. 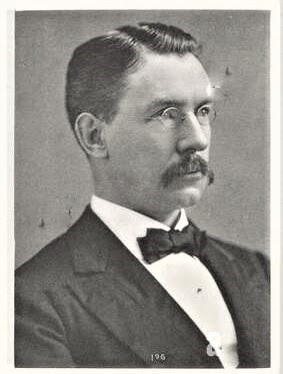 John Gilmore Boyd - original source unknown
Although he earned a medical degree, and practiced at least through 1880, he turned to law and politics.  By the time he purchased 255 East 78th Street he had served in the State Senate and was now president of the National Citizens' Alliance.  Interestingly, he seems to have interacted socially with his German neighbors and was a member of the German language men's singing group, the Liederkranz Society.
Boyd was, as well, president of the New York City Alliance, which protected the rights of citizens.  In 1891 he sent a letter to the Police Commissioners, complaining of what today would be called entrapment.  It said in part:

To the great disgrace of our city, it has become generally known that a large number of Policemen have degraded themselves to the level of spies and have surreptitiously sneaked into liquor stores at unlawful hours and tempted and induced the unsuspecting owners or their employees to sell them drinks or cigars, with the contemptible design to subject them to arrest, annoyance and humiliation for so doing.

He directed the commissioners "to put a stop immediately to all such practices," and to punish the guilty officers.
The Boyd family remained in the house until September 1905, when they sold it to William j. Coppner.  The new owner operated it as a "furnished room house."  Among the tenants in 1910 was Henry Dassie, whose request "to keep pigeons" that spring was denied by the city.
Gustave Rohers, who worked in a lunchroom, lived here two years later.  On Saturday January 27, 1912, around noon, according to The New York Times, "fellow boarders in the house...were attracted to his narrow room by the odor of escaping gas."  They found Gustave dead on his bed.  Dr. McNamara from the Reception Hospital, estimated he had been dead for about an hour and deemed his death a suicide.
Another boarder agreed to sit with the body until the undertaker arrived.  Dr. McNamara had barely returned to the hospital when "there came over the wire an excited telephone message."  The young man sitting with Rohers's body was certain he was still alive.
The New York Times reported, "He had been watching in the room, when suddenly the lips moved.  He had tried the mirror test and it yielded a vapor.  The abdomen of the man on the bed was still warm."  Dr. McNamara began to reply by saying, "That is impossible..." but before he could continue, the caller interrupted him.
"I think he is trying to speak!" he exclaimed.
Within five minutes McNamara was back at 255 East 78th Street.  The sitter's alarm was unfounded.  The New York Times said, "The man was dead.  There was no doubt about it."
Another boarder at the time was a Mr. Prontlich, who seems to have been semi-retired.  He placed an advertisement in the New York Herald that April that read, "Watchmaker wishes position for half day; afternoon preferred."
The narrow brick house continued to house working class immigrants.  In 1921 a single mother advertised, "Houseworker, good plain cook, woman, German, with 6-year-old girl, wishes position, city, country."  And the following year a married couple, the Johnsons, wrote, "Couple, Swedish, first class cook and butler; excellent references; wages $150, city or country."  The combined monthly pay they were seeking would equal about $2,000 today.
In August 1955 Elizabeth B. Allard purchased 255 East 78th Street.  The New York Times noted that she planned to alter the property.  The renovations, completed in 1957, resulted in one apartment and a doctor's office in the basement and first floor, and a duplex apartment above. 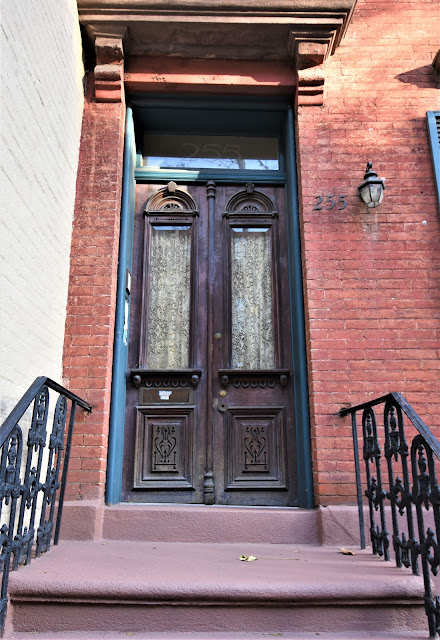 Vintage lace curtains hanging in the entrance add to the aura of antiquity.
No doubt because of its narrow proportions, there are still just two apartments in the house today.  And other than replacement windows, it retains its quaint 19th century appearance.
photographs by the author
no permission to reuse the content of this blog has been granted to LaptrinhX.com
Posted by Tom Miller at 1:07 AM