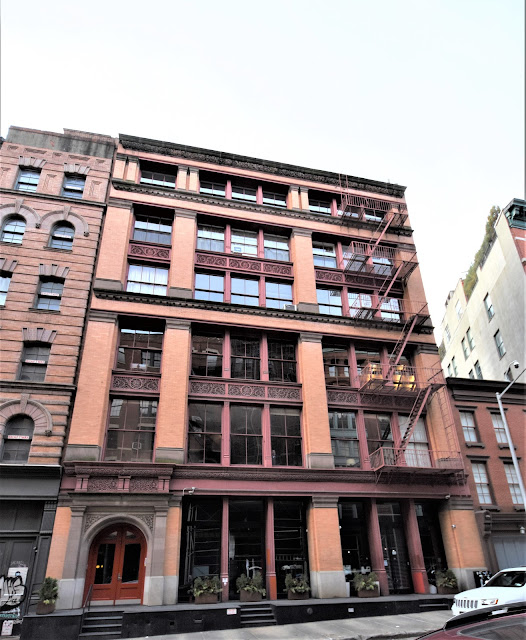 On March 24, 1888 the Real Estate Record & Guide reported that architect Charles C. Haight was working on plans for a "brick and stone warehouse" for John E. Parsons at 149 and 151 Franklin Street.  The block, between Varick and Hudson Streets, had been a neighborhood of two-and-a-half story Federal style houses in the 1830's.  But times had changed.

The district which a century later would be known as Tribeca had begun transforming shortly after the end of the Civil War.  Modern loft buildings replaced vintage houses.  Parsons, who was a well-known attorney--one of the founders and president of the New York Law Institute--joined the trend.
The 58-foot-wide, six-story Romanesque Revival style structure was completed in 1889.  Haight's design, arranged in four vertical sections, forewent the chunky, undressed blocks and vast arches expected in the style.  Instead, crisp-sided brick piers and rectangular openings resulted in a regimented, geometric pattern.  Romanesque appeared in the arched opening, with its delicate foliate spandrel and entablature carvings, and in the intricate designs of the cast spandrels between floors.
The completed building became home to Fishel & Levy, wholesale liquor merchants.  Operated by Joseph M. Fishel and brothers Morris and Adolph Levy, the firm would remain until around 1908.
It was joined in the building at the turn of the century by the International Arithmachine Co., which manufactured and sold early adding machines.  An advertisement on April 2, 1900 read:

At the time of that advertisement, Sir Thomas J. Lipton's tea business operated from The Lipton Building, steps away at the corner of Franklin and Hudson Streets.  But disaster struck in February 1905 when that building was destroyed by fire.  On March 5, the New-York Tribune reported that John E. Parsons had leased 149-151 Franklin to Lipton.
Thomas Lipton had worked in his parents' grocery store in Glasgow, Scotland as a teen.  The enterprising boy saw potential in providing affordable tea to the middle classes.  He was the first to sell tea in tea bags, and to print brewing instructions on the bags.
By now he was a multi-millionaire, had been knighted by Edward VII, and his tea was a household name internationally.
The urgency to move into 149-151 Franklin Street was such that corners were cut.  The New York Times explained, "When the building was leased by the Lipton Company from Mr. Parsons the owner was to have forty days in which to make repairs.  The tea company was in a hurry to get into the building, and as it was vacant, the landlord permitted it."  Sir Thomas Lipton would rue the decision four years later.
Perhaps the greatest threat to tea is water.  In 1912 a water tank overflowed, ruining a significant amount of product.  Sir Thomas Lipton sued John E. Parsons for damages.  But because he had released Parsons from his obligation to repair any defects, the verdict was disappointing.  The jury in State Supreme Court ruled in Parsons's favor on February 17, 1913.  The New York Times reported, "It is alleged that the Superintendent of the Lipton establishment turned the water on without looking at the pipes, and the defendant asserted that the damages were caused by his negligence."
John E. Parsons died on January 16, 1915.  The following year his son, Herbert, sold 149-151 Franklin Street.  Somewhat surprisingly, Lipton did not purchase the building, choosing instead to continue leasing.  In reporting the sale, the Real Estate Record & Guide commented, "The property is located in the wholesale grocery district and will be benefited by the new Seventh avenue subway now in course of construction, which will pass within 100 feet of the building."
The shortage of male workers during World War I may have contributed to the wording of a help-wanted advertisement on July 1, 1918.  It sought: "Girls.  Salary $8 start.  No experience necessary.  Easy work.  Steady Employment.  Thomas J. Lipton, 149 Franklin St."  The salary would equal about $135 per week today.
But the scarcity of men did not preclude the firm's prejudice in hiring a janitor two months later.  The ad on September 9 specifically sought a "porter (white)."
In August 1919 Thomas J. Lipton, Inc. leased a 12-story building in Hoboken, New Jersey and moved its operation from Manhattan.  The following month it transferred its lease on 149-151 Franklin Street to Berth, Levi & Co., manufacturers of sausage casings.
The building was sold in December 1936 but, as Lipton had done, Berth, Levi & Co. chose to continue leasing.  The firm would remain at the address for years.
The third quarter of the century saw a renaissance within the Tribeca district.  In a New York Times article on January 14, 1994, Angela Taylor reported on Maria Susana Salgado's fur-and-yarn garments, which she made and sold in her loft-studio in 149-151 Franklin Street.  Salgado, who had begun as a sculptor in her native Argentina, came to America in 1967 on a Government grant to study art.  Her custom pieces were pricey.  A jacket cost $1,500--more in the neighborhood of $3,750 today. 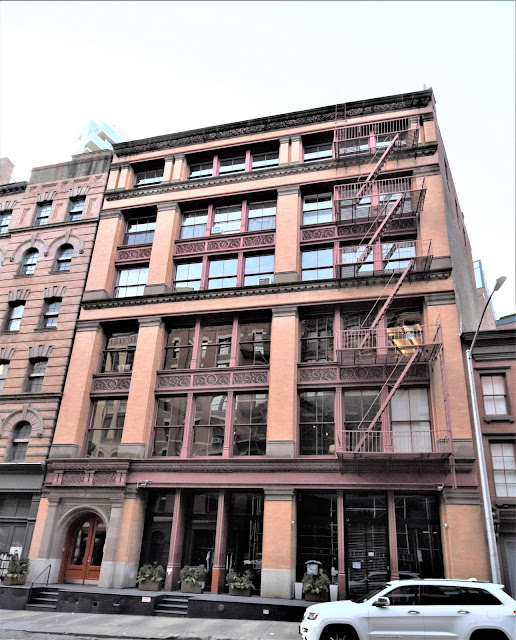 A renovation completed in 1993 resulted in a store on the first floor, offices on the second, and loft dwellings on the upper floors.  In April 1995 Wyeth, a vintage furniture shop, opened in the store.  On July 5, 2000, the space became home to Interieurs, a furniture store.  Today, Patron of The New, a men's clothing store occupies the space.
photographs by the author
LaptrinhX.com has no authorization to reuse the content of this blog
Posted by Tom Miller at 1:16 AM