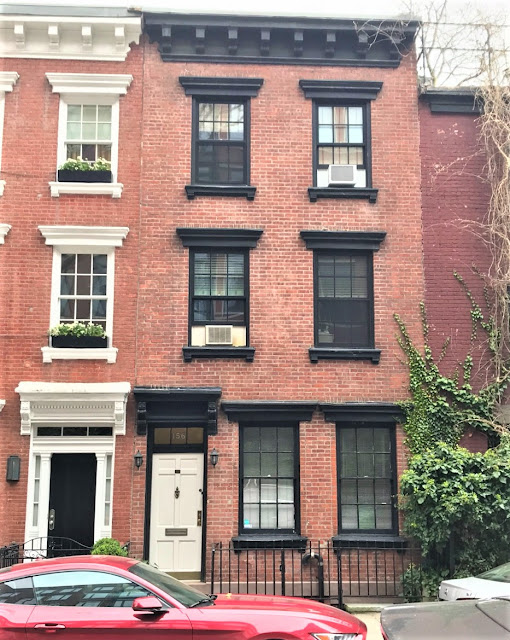 In 1845 James Boorman completed two diminutive houses at 154 and 156 West 11th Street.  (He had earlier erected two similar houses directly behind them.)   No. 156 was a mere 16-feet-wide, too narrow to allow for the handsome entrance sidelights its neighbor displayed.  Although Greek Revival in design, its top floor was full-height, a transitional element of the rising Italianate style.
Boorman quickly found a buyer in Angus McDearmid, a cartman.   The FedEx drivers of today, cartmen drove horse-drawn drays that transported goods and parcels.

By 1855 the house was home to Jacob H. Groesbeeck.  He was the head of Groesbeeck & Co. on Maiden Lane, importers of fancy goods.  The couple's adult son, Charles E., lived with them.  They would remain here through 1863.
It appears the house briefly became a boarding house after the Groesbeecks left.  Given its small proportions, there were never more than two middle-class boarders (with or without other family members) listed at any given time.   Typical was Francis Patterson, a provisions merchant, here in 1864 and '65, and Hiram Palmer, a clerk, who listed the address in 1868 and '69.
John Bellamy, a gentleman's tailor, purchased the house around 1871.  Moving in with him and his wife Harriet was their adult daughter Hattie.  The family took in a boarder, George A. Ahel.  Tragically, on January 26, 1872 Hattie died at the age of 23.  Her funeral was held in the house two days later.
Bellamy's shop was inconveniently located at 1024 Third Avenue.  His was a substantial business, as reflected in the burglary committed early on the morning of New Year's Eve 1873.  He placed an announcement in the New York Daily Herald that read:

The substantial reward would equal more than $11,500 today.
Another advertisement two years later again suggested the scope of Bellamy's business.  It read, "Smart Men Wanted--To sell Bellamy's patent shirt system on commission; good wages and permanent employment."
By then the Bellamys had been gone from the 11th Street house for about two years.  It became home to Frederick C. Wells, his wife, Mary E., and their son Frederick C. Wells, Jr.  Wells was a dealer in medicines at 78 Gold Street.
Like their predecessors, the Wells family took in a few boarders.  On July 5, 1873 an advertisement read, "To Gentlemen--Newly furnished Rooms, cool and pleasant, with breakfast and dinner, is one of the most delightful situations in the city."  One of the gentlemen to answer that ad was George W. James.  He and his wife, Lizzie, had been married a few years and had a two-year-old baby.  James was a coal dealer whose business was unexpectedly in New Jersey.  His name quickly appeared in newspapers after Charles Sacia was put on trial for fraud.
In 1872, James fell victim to one of Sacia's many schemes.  He testified on September 16, 1874 that Sacia sold him property in Brooklyn in exchange for coal, "in small quantities, to be delivered wherever [Sacia] might designate."  When James (and the other victims) received the deeds, he was surprised to see the owner listed as William H. Walker, not Charles Sacia.  Sacia brushed that detail off, saying "that Walker was a wealthy man, and that it was all right."
It was not all right.  William H. Walker was unaware that his real estate was being sold on forged deeds.
Sacia's crimes far went beyond the fake deeds, and a year later he and his cronies were charged "in the fraudulent Palisade Insurance Co., and its forged securities," reported the Brooklyn Daily Eagle.  Almost exactly a year after James's initial testimony, he was scheduled to be the chief witness against Sacia, Lewis E. French "and the rest of the gang who were concerned in fraudulent insurance business, forging bonds and mortgages, and other acts of a like character," according to The New York Times.
James' pending and damning testimony did not sit well with the mob.   The New York Times reported that James informed Justice Keese "that some members of a well-known Broadway gang who were concerned with Sacia had threatened to murder him if he should appear as a witness in the case."
On September 17, 1875 at around 8:00 p.m., James left 156 West 11th Street.  The well-dressed 31-year-old promptly disappeared.  Ten days later an advertisement in the New-York Herald read in part:

Missing--George W. James, of No. 156 West Eleventh street...he is 5 feet 9 inches in height, of slight build, dark hair and eyes, full, dark beard, and moustache, clear complexion; aged 31 years; was dressed in a black frock coat, dark pants and white vest; had on low shoes or gaiters.  Any information respecting him, whether alive or dead, will be suitable rewarded by apply to his almost distracted wife, Lizzie James.

In a separate article, the New-York Herald mentioned, "It is supposed that he had with him a sum of money drawn from an express company...and foul play is suspected."
The article said, "His wife, Mrs. Lizzie James, is said to be almost distracted about the affair.  She was absent making investigations in the matter when the reporter called."  Then, on September 28, The New York Times reported, "The Justice is inclined to believe that the threats of the gang have been carried out, and that belief is strengthened by the fact that Sacia is on the eve of being tried."  James did not appear to testify and it does not appear that he was ever found.
In 1878 the Elizabeth, the widow of William Beatty was running 156 West 11th Street at a boarding house.  Her boarders that year were Knox Johnston and John Patterson, both clerks, and Charles Lincoln, who listed his profession as "agent."  Elizabeth operated the boarding house at least through 1880.
Evelyn Hart took rooms in April 1899.  The 35-year-old, according to other boarders, was "either a stenographer or a confidential clerk downtown."  Beginning early in June they noticed she "acted strangely for several days, as if mentally unbalanced."  Their observations were well founded.
On June 12 The New York Times began an article saying, "'I am the Queen!  The Queen of Prussia!' exclaimed a tall, distinguished-looking woman last night as she strode majestically into the West Twentieth Street Police Station and commanded Sergt. Churchill to rout out the royal foot guards and chastise her enemies."
Evelyn ordered the sergeant, "They have insulted your Queen, Sir.  The guard!  The guard, I say!"
The article said, "Sergt. Churchill's experience told him he had a maniac to deal with, and assuming an air of great deference, he invited the woman into the Captain's private office on the pretense of hearing her story."  Once inside, Evelyn regained her lucidity and correctly identified herself.  The New York Herald reported, "She was sent to the insane pavilion at Bellevue Hospital."
When Edward Grant Coxe enlisted in the United States Army in 1915, he was living in the 11th Street house with his parents.  His father, M. J. Coxe, had been on the New York City police force since 1883.
Edward saw action in the Mexican Border War.  When World War I broke out he was deployed to France, as were his two brothers.  On February 28, 1918 the New-York Tribune reported that Edward had been designated by the War Department "to take the entrance examination at the West Point Military Academy next month."
But, at the time, he was serving abroad.  That same month The Sun reported that the 21-year-old "was cited by the French Government for the capture of four German soldiers while on patrol duty."  Tragically, Edward Coxe would never see West Point.  On September 19, 1918 The Sun reported he had been killed in action. 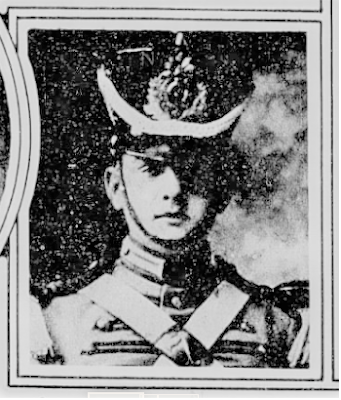 He continued to care for the wounded under heavy machine-gun and artillery fire after he himself was severely injured.  He has since died as a result of the wounds received in action.

Edward's name was included in the Washington Square Memorial Flagstaff, dedicated in 1920. 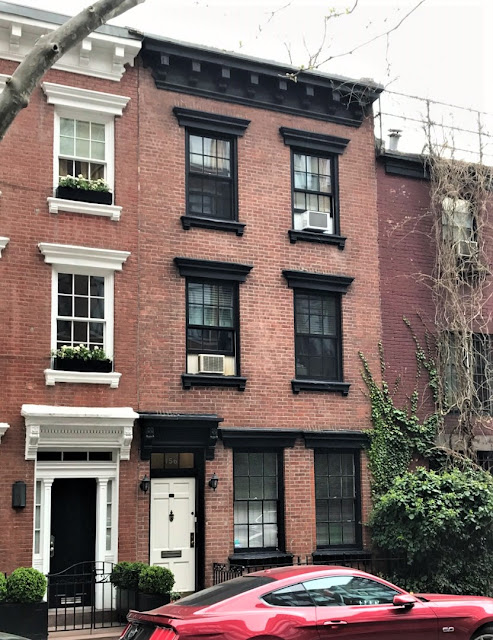 The house was owned by Mary A. Hayes in 1926 when a perhaps unexpected renovation was completed.  The first and second floors became home to a restaurant, while the third now held one apartment.  That configuration lasted until 1949 when the ground floor was converted to a dentist office and the upper two floors became a duplex apartment.  Today there are three residential units in the skinny, charming house.
photographs by the author
LaptrinhX.com has no authorization to reuse the content of this blog
Posted by Tom Miller at 1:17 AM