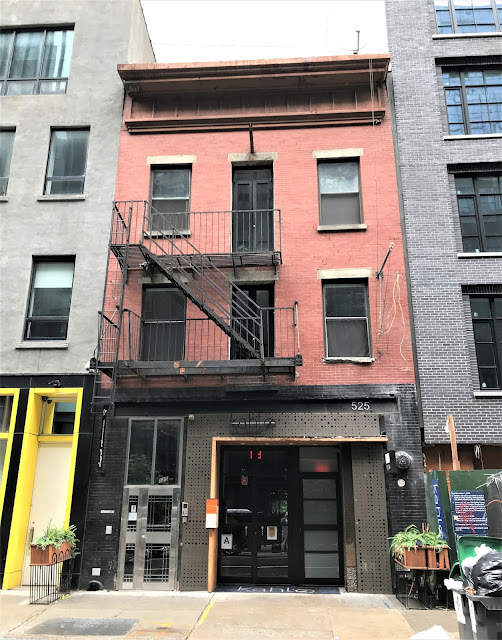 By 1879 the family of Frederick Heather lived in the 25-foot wide brick-faced house at 525 West 29th Street.  Heather owned a boiler business at 607 West 38th Street.  He and his wife, Louisa, had three grown sons, Henry, Charles, and Louis.  Only Henry was unmarried.  He lived with his parents and worked in the boiler business.
Heather's business was successful enough that in 1884 he expanded, building a machine shop on Eleventh Avenue at 37th Street.  Frederick Heather died around 1887, and on May 14, 1891 Louisa died "suddenly" at the age of 78.  Her funeral was held in the West 29th Street house three days later.
The neighborhood near the Hudson River was becoming increasingly gritty by the time of Louisa's death.  The three Heather children, who inherited the property in equal shares, leased the family home by 1897 to the Foster Machine Co.  The firm converted the house for light manufacturing.  It hired work to be performed off site, as well.  An advertisement on April 12, 1899 read:

But major change was on the horizon.  On July 27, 1904 the three Heather heirs sold the property to Henry Allen, giving him a $2,000 mortgage (around $60,000 today).  It was resold the following year to Charles A. Ahrens, who initiated a major remodeling.
The renovations, completed in the summer of 1906, transformed the house into a stable.  Loft openings now replaced the center windows of the second and third floors, and a truck bay engulfed most of the ground floor.  And advertisement in the New York Herald on September 17, 1906 offered for lease, "New three story Stable; 28 stalls and wagon room; immediate possession."
It was leased to A. M. Wells, owner of the Wells Natural Ice Company.  His business was, of course, mostly seasonal.  The stable was a hive of activity during the hot summer months, as drivers headed off to the massive ice house, then to businesses and homes across the city with blocks of ice.
The coming of winter tremendously decreased the demand.  On October 30, 1910 and advertisement in the New York Herald offered, "Account season ending, must sell thirty Horses, Mares, used hard all summer; no reasonable offer refused; trial allowed.  Inquire foreman, Wells Natural ice Stables, 525 West 29th st."
In the mid-1920's the stables was converted to office space.  Among the tenants was architect B. H. Whinston, here by 1928.
As the 21st century dawned, proposals to reshape the West Side neighborhood took shape.  The Friends of the High Line was organized in 1999 to transform the abandoned elevated railroad spur into green space.  Soon thereafter, ideas to erect the West Side Stadium atop the old West Side Yard, a storage yard for Long Island Rail Road trains, were proposed.  (That concept later took shape as Hudson Yards.)
In 2005 the old ice stables was renovated to accommodate a restaurant on the ground floor.   Nine years later The New York Times would say it sat "on what used to be a dull block of garages and tenements, but is now transforming into a luxury row."
In 2014 Noel Ashman and Michael Bregman opened the Leonora here, described by Brian Sloan in The New York Times as "A 'semiprivate' clubhouse for the creative set."  He explained, "The Leonora is hoping to cultivate an atmosphere of exclusivity to lure celebrities from their urban aeries for a paparazzi-free night on the town." 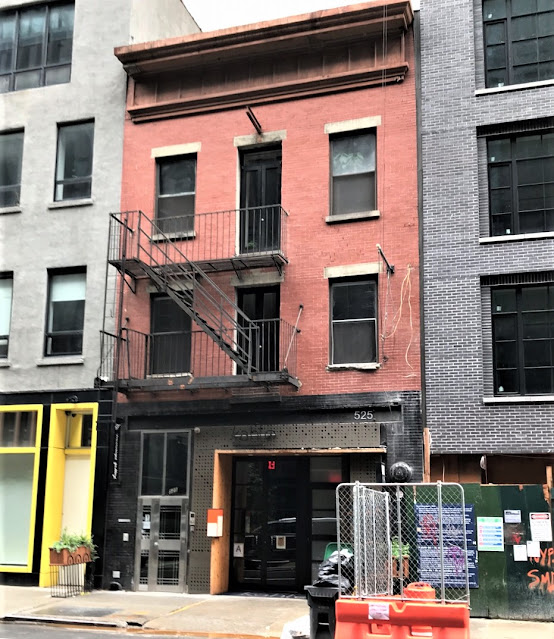 Unfortunately for the club, it was evicted for non-payment of rent in 2016.   Today the ground floor is home to a "modern Mexican" restaurant, while studio loft spaces occupy the upper stories.  The vintage building is one of a handful of 19th century survivors along the block of modern residential structures.
photographs by the author
no permission to reuse the content of this blog has been granted to LaptrinhX.com
Posted by Tom Miller at 1:19 AM