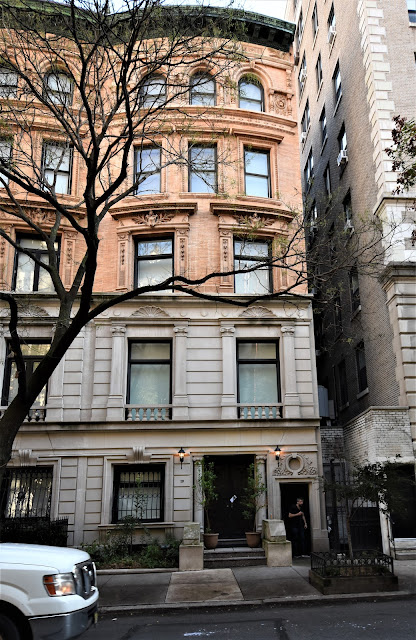 In 1894 architect Henry Andersen designed a pair of opulent homes on the northern side of East 82nd Street, just west of Madison Avenue, for developer Daniel Hennessy.  Construction took two years to complete.
The mirror-image, 25-foot-wide mansions were an especially dignified take on neo-Italian Renaissance architecture.  Short stoops introduced the recessed entrances, flanked by Ionic columns.  The service entrances sat below oculi framed in carved, spilling cornucopia. Like the first floor, the second was clad in rusticated limestone.  Its windows were fronted by stone balustrades and flanked by Ionic pilasters.  Delicately carved shells sat atop each opening. 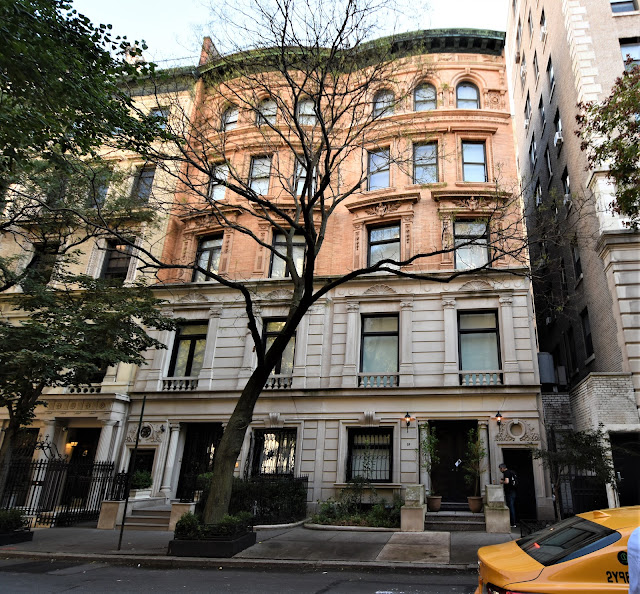 The upper three floors, which were gracefully bowed, were faced in light orange brick and trimmed in terra cotta.  Andersen embellished the top floors with ornate, Renaissance inspired panels and entablatures.  An elaborate terra cotta frieze introduced the bracketed cornice.
Edward A. Kerbs and his wife, Alice, purchased 19 East 82nd Street late in 1899.  Kerbs was a partner in the cigar manufacturing firm of Kerbs, Wertheim & Schiffer.  The couple had a four year old daughter, Jeanne Edith.
The Kerbs wasted little time in opening the doors of their new home to guests.  On February 22, 1900 the New York Herald announced, "Mr. and Mrs. Edward Kerbs, of No. 19 East Eight-second street, will give a large reception to-day, which will be in a measure a house warming."
During the 1915-16 winter season entertainments in the house focused on Jeanne as she was introduced to society.  It began on December 24 when her parents hosted a dance at the Ritz-Carlton for her.
The 82nd Street house was the scene of Jeanne's marriage to William Kallman on February 25, 1919.  It would be the last large event for the family within the residence.
Less than three months later, on May 12, 1919, Edward A. Kerbs died in the house.   His philanthropic lifestyle extended past death.  His will left $15,000 (a quarter of a million in today's dollars) to the Hebrew Orphan Asylum, of which he was a trustee, and $50,000 to the Trudeau Sanitarium in the Adirondacks.   He stipulated that the latter amount was intended "to erect pavilions for men and women tubercular patients."
The bulk of the estate went to Alice, with the direction that after her death it passed to Jeanne.  But should Jeanne die first, without children, "the estate is to be used to establish the Kerbs Hospital for Tubercular Diseases."
As a side note, in 1953 Jeanne honored her parents by funding the Kerbs Memorial Boathouse, designed by Aymar Embury II, in Central Park.

The Kerbs Memorial Boathouse in Central Park.  photo via the Central Park Conservancy
Almost immediately after her husband's death, Alice sold the mansion to millionaire Isaac N. Phelps.  If he intended to move in, he quickly changed his mind.  In October 1920 he sold it to John Sergeant Cram and his wife, the former Edith Claire Bryce.
Cram was president of the Dock Board and head of the New York Public Service Commission.  He was, as well, the treasurer of the Dayfield Realty Company of which Edith was a director.
Born in 1851, both the Sergeant and Webb families were socially prominent.  John's first cousin William Seward Webb was married to Eliza Vanderbilt, the daughter of William H. Vanderbilt.
Edith was his second wife.  He had married the widow Georgiana Beatrice Budd in 1898 when he was 47 years old.  She died in 1903.  He and Edith were married in 1906 and would have three children, Henry Sergeant, Edith Bryce, and John Sergeant.  The family had a summer home in Newport and a winter house in Palm Springs, Florida. 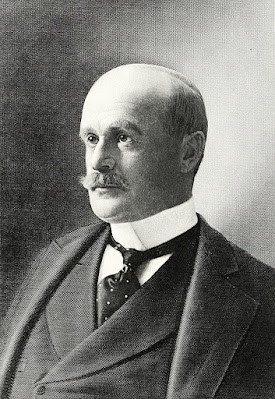 John Sergeant Cram, New York State's Prominent and Progressive Men, 1902 (copyright expired)
Despite her husband's highly visible government positions, it was Edith whose name appeared in newspapers more often.  She was both an ardent pacifist and an activist for human rights.
On December 1, 1921, for instance, the New York Herald reported that she chaired a meeting of the World Peace Fellowship in Town Hall the evening before.  The article said it was "attended by more than 1,000 persons, at which most of the audience signed pledges they would never engage in a war, offensive or defensive, whether it be by bearing arms, making or handling munitions, voluntarily subscribing to war loans or laboring to set others free for war service."
During World War I, men were imprisoned for "political offenses."  In 1922 the wives and children of 37 of them set off on a protest from the West Coast to Washington D.C. seeking their release.  On April 26 they arrived in New York City and paraded up Madison Avenue carrying banners with mottos like "I Have Never Seen My Daddy" and "Is Opinion a Crime in the U.S.A.?"  The New York Herald reported, "In the afternoon they went to the circus as the guests of Mrs. J. Sergeant Cram."
Edith's agenda was not all political, of course.  She routinely entertained in the 82nd Street house.  On February 21, 1924 The Sun reported, "Mrs. J. Sergeant Cram gave one of a series of dinners last evening, at her home, 19 East Eighty-second street," and on February 1, the following year--presumably just before heading to Palm Beach--she gave another.
The family received a major scare in April 1926 when the 72 year old Cram fell down the staircase at 19 East 82nd Street.  Two months later, on June 24, the Oswego Palladium-Times reported he had "failed to rally," and "is seriously ill as the result of severe injuries to his head."
Nevertheless, Edith and her daughter went to Newport that season.  On September 10, The New York Sun announced that "Mrs. J. Sergeant Cram and Miss Edith B. Cram have returned from Newport."
Edith continued with her pacifist activities, which did not go unnoticed by right-wing Ralph Montgomery Easley, head of the National Civic Federation.  In a series of articles in the New Republic in 1924, Captain Sidney Howard placed Easley at the top of his list of "self-appointed, business-backed, hell-roaring flag wavers." On May 5, 1927 Robert Dunn, writing in The Daily Worker, listed "some of the persons this man Easley has gone out of his way to slander and malign."  Among them were H. G. Wells, Cardinal William O'Connell, and "Mrs. J. Sergeant Cram, noted peace advocate."
In 1931 J. Sergeant Cram was 80 years old.  It may have been his advancing age that prompted the Crams to lease their home to a William Randolph Hearst concern in August that year.  The firm may have eyed the property for development, since it already owned the entire Madison Avenue blockfront between 82nd and 83rd Streets, along with the twin house next door at 17 East 82nd.
Instead, the mansion was subleased.  It was home to the widowed Mrs. Carl Newkirk in 1939.  Her husband had been an attorney in Frankfort, Germany.  On February 4 that year her son,  Rudolph H. Newkirk, was married in St. Thomas Church on Fifth Avenue to Hope Emerson Lyons.
John Sergeant Cram died in 1936.  In July 1941 the 82nd Street house was sold to Louis Potter.  He converted it to apartments and furnished rooms.
The elegant mansion saw a variety of commercial tenants in the ground floor "apartment" over the next decades.  In the early 1970's it was home to the Coe Kerr art gallery, and in 1976 became the World of Leslie Blanchard, the society hairdressing salon of "world-famous authority on hair coloring, styling and conditioning," Leslie Blanchard as described by The Journal News on September 16, 1976.  By 2008 the property was owned by Warren Adelson and was home to the Adelson Galleries. 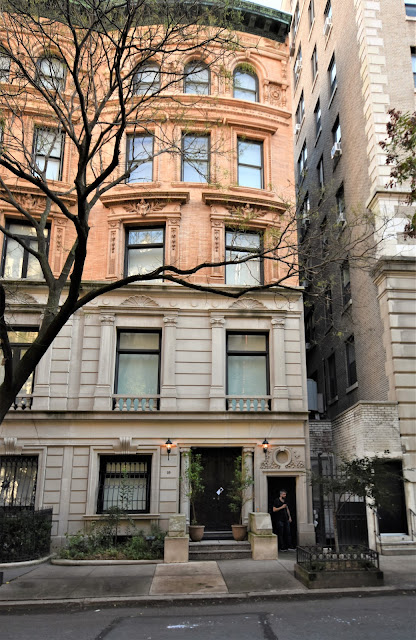 Then, in 2012 the mansion was purchased by the foundation organized in 2005 by impressionist artist Cy Twombly.  (He had died in Rome on July 5, 2011.)  It announced the house would be converted to an education center and Cy Twombly museum.  The Cy Twombly Foundation continues to stage exhibitions and display Twombly's works here.
photographs by the author
LaptrinhX.com has no authorization to reuse the content of this blog
Posted by Tom Miller at 1:40 AM