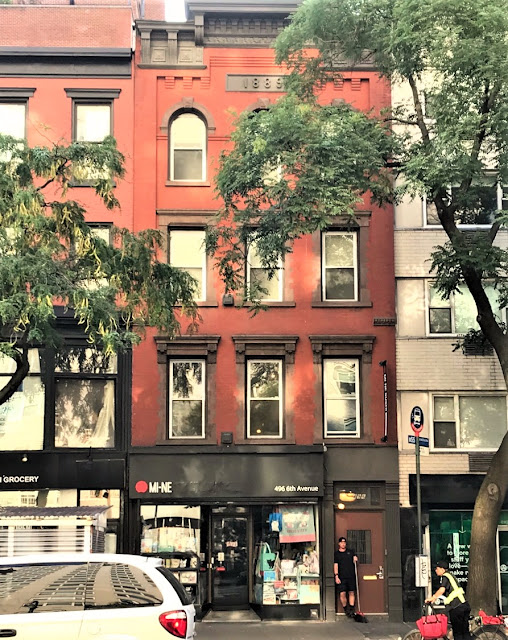 In 1842 Thomas C. Acton and his family lived in the boarding house at 180 Sixth Avenue (renumbered 496 in 1925).   That year he worked as a janitor in Grammar School No. 35 around the corner on West 13th Street.  Born in Greenwich Village to relatively poor parents, the young man had aspirations beyond janitor work.  He landed a city job as deputy clerk, then became Deputy Register, and was appointed Police Commissioner of the Metropolitan Police Force in 1860.  The New York Times would later called him "the most prominent public official of his city."
By then, of course, the Acton family had moved away from Sixth Avenue.  The ground floor of the boarding house in which they had lived had a store at street level.  In the late 1840's it was home to Fendall & Donnel, a hardware and cutlery store, and by 1854 S. N. Burrill ran his "ice cream saloon and restaurant" from the space.
The owner of the property, Gabriel Winter, leased the building to Leonhard Boch in 1863.   He ran his blacksmith shop in the rear and continued to operate the upper floors of the house proper as boarding house.  A disturbing article appeared in The Daily Whit on December 10, 1867:

Another blacksmith--Michael Boch of No. 180 Sixth avenue, New York--has been wounded by thrusting a pistol into his forge without first examining its barrels.

In the late 1870's E. J. Lecocq's photographic gallery was here.  (Advertised as the "First Gallery on block below Macy's store," the rear entrance of which was on West 13th street.)  He left in 1882 and the space soon became home to Quong Sing's laundry.

Sadlers' Catholic Directory, 1880 (copyright expired)
Major change would come to the building after Rosanna Smith (who lived directly across the street at 181 Sixth Avenue) purchased 180 Sixth Avenue on February 21, 1889.  The price she paid, $28,100, would be just under $830,000 today.  She had plans for the outdated structure and hired the architectural firm of A. B. Ogden & Son to make significant alterations.  Although the architects most often worked in Romanesque Revival and Renaissance Revival styles, this project would be different--a blend of the popular neo-Grec and Queen Anne styles.
The attic level was raised to full height and the façade received a facelift.  The storefront was given fluted, cast iron pilasters.  The second floor windows now wore prominent, bracketed brownstone cornices; and those of the top floor were fully arched, with handsome stone lintels and keystones.   A stone plaque below the elaborate pressed metal terminal cornice announced the date 1889. 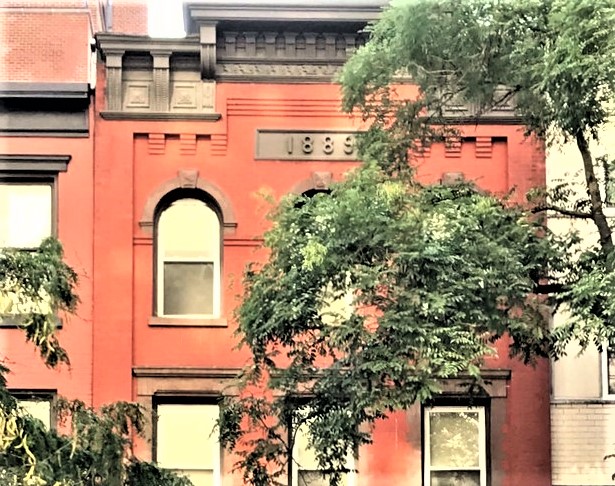 The upper floors now housed small businesses and offices, and the ground floor became a restaurant owned by Pulaski Terwilliger.  He and Wilson Terwilliger ran a large livery stable on East 121st Street, as well.  On March 31, 1891 the Board of Aldermen gave him permission "to place and keep an ornamental lamp-post and lamp in front of No. 180 Sixth avenue, provided the lamp be kept lighted during the same hours as the public lamps."  The resolution made clear that "the work to be done and gas supplied as his own expense."
By 1892 the Sixth Avenue Gospel Mission was operating from an upper floor and Caroline C. Nicholas had taken over the "eating house."  The Mission remained at least until 1898, by which time Otto C. Wurst's photography studio was here. 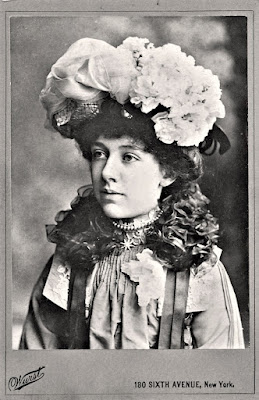 Dressed in her best finery, this young girl was brought to Wursts's studio in the 1890's.
Otto Wurst advertised his studio for sale in 1906, describing it as "Well-equipped New York gallery established eighteen years.  If sold at once buyer can get big bargain.  Ill health the only reason."
The restaurant space was taken over by a United Cigar store in June 1910, but in 1921 it once again became a restaurant, owned by George Wilmot.  Among the tenants in the upper floors was Papamihales Bros., "furs and fur trimmings." 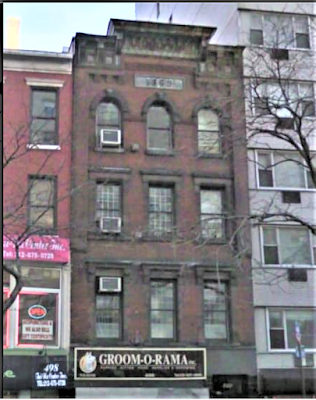 The contrast of brick and brownstone was lost beneath a century of grime.  photo via wikamapia.org.

By the 1990's when It's A Small World Pets occupied the ground floor, a coating of soot and grime covered 496 Sixth Avenue.   The space later became Groom-O-Rama, and today is a delicatessen-café.  And A. B. Ogden & Son's eye-catching façade has happily been cleaned.
photographs by the author
no permission to reuse the content of this blog has been granted to LaptrinhX.com
Posted by Tom Miller at 1:45 AM