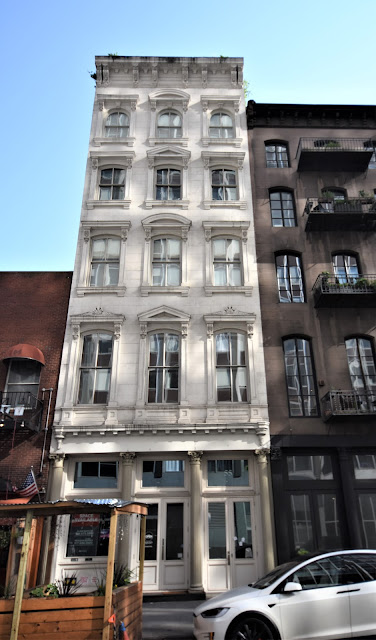 It appears that a French dressmaker had moved her business into the house at 55 Murray Street between West Broadway and Church Street in the early 1850's.  An advertisement--written in French--on October 20, 1853 read:

We ask for a good Frenchwoman who knows how to sew well.  Contact 55 Murray Street between 12 and 2, after noon.

That year attorney James R. Whiting purchased the property and soon erected a five-story store and loft building on the site.  Faced in gleaming white marble, it was designed in the Italianate style above the cast iron storefront.  The architrave surrounds of the upper floor windows and their Renaissance-inspired pediments could have as easily graced a civic building.
The earliest tenants were dry goods merchants.  In 1859 William Brand & Co. advertised a plethora of items, including "Scotch linens, Barnsley sheetings, bleached and brown damasks, linen and Union table cloths, diapers, towels, hucks" and such.
Someone associated with a garment shop in the building placed an advertisement totally unrelated to the business on June 8, 1859.  The puzzling ad read:

Wanted--A violinist, a good player.  One willing to travel, and capable of leading at a performance; must be satisfied with a moderate salary.  Apply at 55 Murray street, up stairs, in the shirt store. 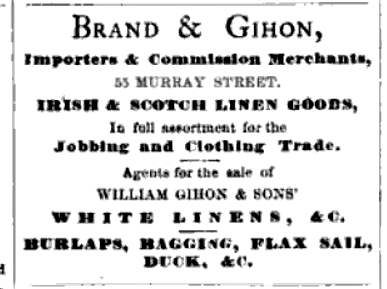 The Chronicle, November 24, 1866 (copyright expired)
It is unclear what Alexander Platt's business was, but he got himself into an embarrassing situation on November 29 that year.
On that night Platt went to Greene Street, notorious for having no fewer that two dozen houses of prostitution.  The New York Times reported he accompanied "Cecilia Austin, otherwise Flora Reed, a syren [sic] from Greene-street" to her house.  The next day he realized his valuable gold watch was gone.  Prostitutes very often got away with thievery since their clients avoided the humiliation and scandal that would accompany reporting the crime.  Such was not the case with Platt and Cecelia was arrested later that day.
By the time the Whiting family sold 55 Murray Street in 1877, the tenant list was changing as glassware merchants took space.  In 1878 Vogel & Reynolds, "dealers in glassware," was here, and by 1884 Hasings & Hahn, glass manufacturers had space.
At the turn of the century the building was occupied by Surpless, Dunn & Co., hardware; A. L. Tuska & Co., which dealt in Japanese goods; and the New York Bag Company which occupied several floors.
In July 1901 a fire broke out on the third floor, causing about $64,000 in damages in today's money.  Only eight months later it happened again.  On Saturday night, March 15, 1902, the engineer of a Sixth Avenue elevated train noticed smoke coming from a fourth floor window.  He stopped his train midblock between Church Street and West Broadway directly in front of Fire Patrol No. 1 and blew his whistle several times.  He shouted that there was a fire at 55 Murray Street.
The blaze had broken out in the New York Bag Company, which was filled with flammable materials.  It soon grew to a three-alarm fire.  The New York Times reported, "An exciting incident occurred soon after the second alarm had been sent in.  Four firemen of Engine Company No. 7 had climbed to the fourth story by the fire escape, and as they reached the cage a sheet of flame burst forth, completely enveloping them."  The water tower truck had just gotten into position.  The stream of water "struck the men with great force," but saved their lives.
This fire was much more intense than the earlier one.  The New York Times said, "The fire burned fiercely for over an hour, spreading up to the top floor and roof, down to the third floor, and back to the Murray Street side."
A. L. Tuska & Co. remained in the building following the repairs.  It offered an array of Japanese imports including porcelains and decorative items.   Also in the building by 1907 was Plume & Atwood Mfg. Co., makers of "electric portables," such as "lamps, unmounted gongs for electric bells, etc."
For several years the 55 Murray Street was occupied by the Columbia Graphophone Company.  It moved out in 1920 after erecting its own building at Fifth Avenue and 34th Street.  In March that year, the I. Blyn Shoe Company purchased the property.   Founded in 1874, it operated the popular Red Cross Shoe Stores.  The firm moved its main office into the building and continued to rent space.
An advertisement in May 1921 offered a "fine day-lighted loft, especially suitable for office use."  The 4,300 square foot space was offered at "less than $1.00 per sq. ft." 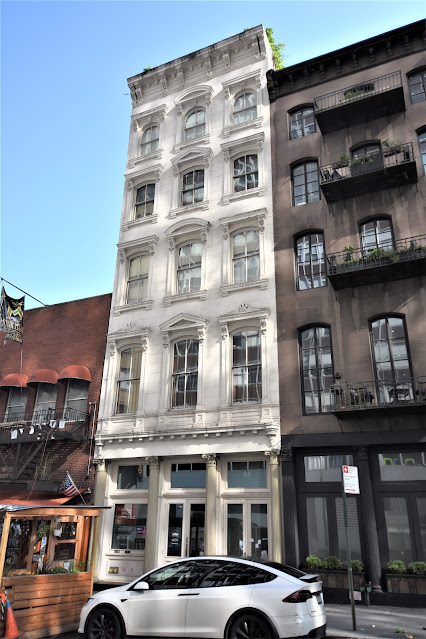 Change came in 2014 when a renovation resulted in a total of four expansive apartments above the ground floor.  The elegant marble building is remarkably intact after near 170 years.
photograph by the author
LaptrinhX.com has no authorization to reuse the content of this blog
Posted by Tom Miller at 1:08 AM