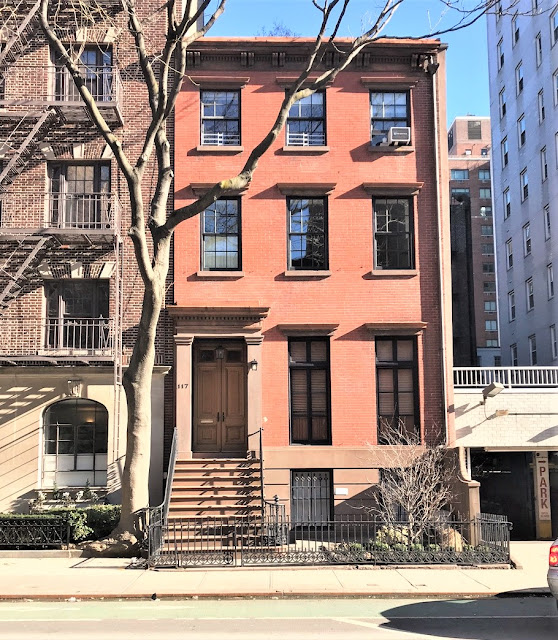 The handsome, paneled double doors are deemed a "notable feature" by the Landmarks Preservation Commission.
Elizabeth Walsh had four brick-faced houses erected in 1848 on the north side of West 12th Street, between Sixth and Seventh Avenues.  Three stories tall, the 23-foot wide residences sat upon rusticated brownstone basements.   Floor-to-ceiling French windows shared the parlor level with the fine Greek Revival entrance, its entablature graced with a dentiled cornice.  The paired brackets that upheld the roof cornice were influenced by the emerging Italianate style.
No. 117 West 12th Street first became home to the family of Pierce Duffay.  Interestingly, he listed his occupation as "junk."  Given his new, high-end home, it is obvious he was not the rag-picker that the term might brings to mind.  Most likely his was more like today's salvage businesses.
The Duffays remained for several years.  In 1857 through 1859 builder Henry Boyd lived in the house.  Then, in 1860 long-term residents arrived with the family of Charles B. Macy.
Macy was a wine merchant whose business was at 67 Liberty Street.  Born on December 4, 1807, he traced his American roots to Thomas Macy, a Puritan who arrived in Massachusetts around 1635.  On April 16, 1834, Charles B. Macy married Lavinia Seely.  The couple had four children, Caroline E., Lavinia, Charles S. and Robert S. Macy.
Lavinia had barely settled her family in their new home when she had to turn her attentions to the upcoming wedding of Caroline (known as Carrie).  She and Charles S. Jenkins were married in the Church of the Ascension on Fifth Avenue at 10th Street on August 1, 1861.
Robert was eight years old at the time of his sister's wedding.  In 1867, now a teenager, he contracted a terrifying disease--typhoid fever.  The boy died in the 12th Street house on November 26.   Interestingly, his funeral was not held in the family residence, as was customary, but in St. Ann's Episcopal Church.
Charles B. Macy died around 1870.   Charles S. Macy inherited the house and five years later, in June 14, 1875, he transferred title to the property to his mother.  The transaction was deemed "gift."
Charles remained with his mother in the house in which he had grown up.  By the early 188o's he was a physician and by 1886 was Clinical Assistant to the Chair of Gynecology at the New York Homoeopathic Medical College.  He was a well-respected member of the college faculty and at the turn of the century held the position of treasurer of the school's Dispensary Society.
On September 23, 1901 Lavinia Seely Macy died in the house that she had called home for six decades.  She was 85 years old.
Charles sold 117 West 12th Street to another doctor, J. Wilford Allen, in 1905.  The two not only knew one another professionally (Dr. Allen was also a faculty member at the New York Homoeopathic College), but they were neighbors.  In its June 1905 issue, The American Physician announced:

Dr. J. Wilford Allen, our enthusiastic and indefatigable Materia Medica Miscellany editor, announces the removal of his office to 117 West Twelfth Street, opposite his former location.  While continuing his general practice, Dr. Allen will hereafter devote special attention to the study and treatment of chronic diseases.

The doctor and his wife, Bertha, had a daughter, Elisabeth, known as Billie.  Mrs. Allen's widowed mother, Harriet A. Brush, also lived in the house.
Later that year The Hahnemannian Monthly announced, "Dr. and Mrs. T. W. Allen [sic] invited the faculty and students of the New York Homoeopathic College to a reception given...at their home, 117 West 12th Street, Wednesday, October 11th, at 8 o'clock.  Music and refreshments."
Like Charles S. Macy, Allen was active in homoeopathic affairs, both socially and professionally.  He was a member of the Dunham Club of New York, organized in 1894, the membership of which consisted entirely of homoeopathic doctors.  In 1907 he was elected the club's president.
Harriet A. Brush died in the house on February 15, 1910.  Her funeral was held in the parlor two days later.
By 1917 Dr. Charles T. Sibley not only worked with Allen in his office, but lived in the house, as well.  He very well may have been one of Dr. Allen's students, since he graduated from the New York Homoeopathic Medical College in 1905, the same year Allen purchased the house.
A native of Somersetshire, England, Sibley had been out of the country for several years.  In 1908 he had helped establish a Congregational mission hospital in Davao, the Philippines, and he and his wife, Anne, had lived there until 1916 as he operated it.
There was a third physician in the office by 1921, Dr. Edward H. Rogers.  He treated a high-profile patient that year.  The distinguished scientist Madame Marie Curie and her two daughters arrived on the Olympia in May.   She had a grueling schedule ahead of her.  She was to receive degrees from several colleges, awards from scientific organizations, and be honored at numerous receptions throughout the New York and Washington DC areas.
On May 18, 1921 The Evening World reported "Madame Marie Curie was slightly indisposed today.  She was examined by Dr. Edward H. Rogers, of No. 117 West Twelfth Street."  The physician issued a statement that said in part:

I find Madame Curie to have been very much exhausted by her voyage from France, and in no condition to take part in so many of the receptions and dinners that have been planned during the next few weeks.  I have so advised her.

Billie Allen was educated at the Packer Collegiate Institute, formerly known as the Brooklyn Female Academy.  Following her introduction into society, Billie's name began to appear in society columns.  On January 4, 1925, for instance, The New York Times announced, "Miss Elisabeth Allen, daughter of Dr. and Mrs. J. Wilfred Allen of 117 West Twelfth Street, gave a luncheon at Sherry's yesterday for Miss Dorothea C. D'A. Kibbe, debutante daughter of Mrs. Harry Ulysses Kibbe, of 1,148 Fifth Avenue."
In September 1930 Elisabeth married Gilman Williams, the Brooklyn Times Union noting, "Mrs. Williams is a former Packer girl."
Dr. Charles T. Sibley and his wife, Anne, were still lived with the Allens.  Sibley purchased the house from his long-time partner and landlord that year.
In the early morning hours of February 5, 1932 Sibley was called to the house of John R. Voorhis at 786 Greenwich Street.  The amazing man was well-known in Greenwich Village and the city in general.  The Sun reported, "He was 102 years old, more than half way through his 103d year, and his fifty-eight years of public service terminated only last October 20 when he retired from the office of chairman of the Board of Elections."
Voorhis had been sick for two days and was in the care of a nurse.  She checked upon him shortly after midnight and found his breathing labored.  She telephoned Sibley, who had been the elderly man's doctor for many years.  He rushed to the Voorhis home, but his patient died of a heart attack at 12:45 a.m.
In October 1947 Anne Sibley purchased about 15 acres of land in East Fishkill, New York, possibly as a site for a summer or retirement home.  Charles Sibley's long-term hobby of birdwatching may have contributed to the decision to buy the land.
The Sibleys moved out of No. 117 in 1955.  Charles died two years later, on September 4, 1957, at the age of 83 after a long illness.  That same year the West 12th Street house was converted to apartments--just one per floor.
A subsequent renovation completed in 1983 resulted in a duplex in the basement and parlor levels.  The last of the 1848 row to survive, the house is amazingly preserved.
photograph by the author
Posted by Tom Miller at 1:59 AM