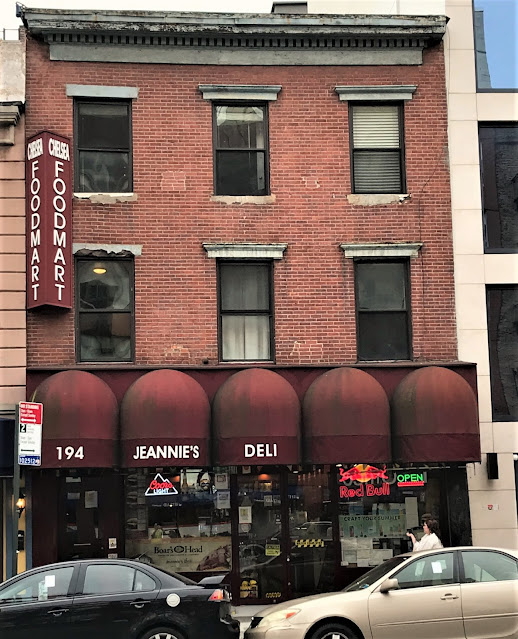 As the Chelsea neighborhood filled with handsome brick and brownstone homes in the 1840's, Eighth Avenue developed as a shopping street.  Its houses were designed with shop space at the street level.  Among them was 194 Eighth Avenue, a three-story, brick-faced structure designed in the vernacular style.  Its dentiled cornice with plain fascia board drew from the increasingly popular Greek Revival style.
By 1850 John H. Hinton and his son, John, who lived nearby on West 20th Street, ran their pharmacy downstairs.  The upper portion was home to Louis Lang, a shoe merchant, and his family, in the 1850's.
The Hinton drugstore remained here through the 1860's.  In 1870 the building was purchased by Henry McAleenan, who moved his pawnshop, H. McAleenan, into the store space and continued to rent the upper floors.  Like his predecessor, Henry McAleenan lived on West 20th Street.
Henry A. McAleenan had opened his first pawnshop in 1844 at 52 Mulberry Street.  He knew, like all other brokers, to be cautious about the goods he accepted, as thieves routinely attempted to pawn stolen goods.  On December 21, 1875 Officer Beveridge watched the comings and goings at the H. McAleenan shop closely.  Earlier, George H. Cannon and John Burns had broken into the clothing store of Julius Wilizinski and made off with $307 in clothing.  In an ironic twist, their horse and wagon with the goods was subsequently stolen.  Beveridge's hunch played off and Edward Kenney "was caught in the act of pawning [the goods] at No. 194 Eighth avenue," according to the New York Herald.
On September 25, 1880, The New York Times reported, "A young woman, tastefully attired in a suit of navy blue, trimmed with white lace, and so closely veiled that her features could not be distinguished, entered the pawnshop of Henry McAleenan, at No. 194 Eighth-avenue, yesterday morning."  The woman laid a gentlemen's breastpin with a solitaire diamond on the counter and asked McAleenan what he would lend on it.
When he told her $20 (around $525 today), she gasped.  "Why, is it a real diamond?"  Her obvious surprise raised McAleenan's suspicions.  "He detained the woman on some slight excuse," said The New York Times, and sent a boy to the West 20th Street police station.  When she could not give satisfactory answers to the responding policeman, she was arrested.
In the meantime, John A. Callaway,  a young man who was staying at the Rossmore Hotel, complained at a different police station that he had been robbed of a breastpin.  "He said he had met a woman on Sixth-avenue early yesterday morning, and accompanied her to a house, the location of which he could not remember.  When he awakened, after a sleep, his companion had disappeared, and his diamond pin was also gone," said The New York Times.
Callaway was brought to the 20th Street station house where he identified both his pin and the female thief.   Cornered, the 28-year-old admitted her name was Emma Fuller.  She said she had married a man named Fuller against her parents' wishes, "who proved to be a worthless fellow, and who, by his conduct, drove her to a life of shame."  Emma attempted suicide in her cell by hanging herself from a silk scarf, but she was rescued and, then, closely guarded.
By the 1890's Henry McAleenan had amassed a fortune.  Married to Anne E. Fullan, he had five children and lived in a spacious home at the corner of the Broadway and 164th Street.  The New-York Tribune described his property as being "like a vast country estate in the heart of the city.  It had a frontage of about 106 feet on the Boulevard [i.e., Broadway] and 282 feet along 164th Street."
In 1892 another thief entered the pawnshop, but this time as an employee.  Frederick G. Wood had arrived in New York that year.  The Press said, "Since he was 12 years of age he has worked in a London pawn shop and gained a thorough knowledge of the business."  He quickly gained employment in McAleenan's shop, "being given the jewelry and diamond department."
Late in December 1892 McAleenan told Police Inspector McLaughlin that he was being robbed.  Suspicion fell on Wood and undercover detectives followed him for two weeks.  Eventually one of them overheard him attempting to sell a pair of diamond earrings to saloon owner Otto Lucks in Brooklyn.  As it turned out Lucks had already purchased several valuable articles.
Arrested, Wood professed his innocence.  But when he was searched and diamond rings and pawn tickets for other diamonds were found on him, he confessed.  He admitted that he started stealing from McAleenan two days after he was hired.  "In a year he had stolen about $6,000 worth of goods," said The Press on January 14, 1893.
Henry McAleenan's pawnshop was so profitable that when a developer approached him to buy the property, he flatly refused.  On January 7, 1907 the New-York Tribune reported, "Henry McAleenan has a pawnshop, a modest little one, on 8th avenue, in a building he owns."  The developer had managed to buy up all the property along the block except this one.
According to the article, after having been refused several times, the developer said, "I'll give you $550,000 for that little plot."  (It was a massive sum, around $15.6 million today.)

Were it not for that fact, an apartment building would assuredly occupy the Eighth Avenue block between 19th and 20th Streets today.
Henry A. McAleenan died in 1913.  The business was taken over by his son, Arthur.  Around 1920 a man walked in and pawned his coin collection.  According to Meyer Berger in his 1960 Meyer Berger's New York, "Among the pieces in his collection was a gold medallion with Queen Elizabeth's likeness on it."
Sensing that it was rare, Arthur sent it to the New York Numismatic Society, but was told they had never "seen nor heard of such a piece."  McAleenan put a $500 price tag on it and placed it in the window.  Berger wrote, "About a year later a Dutch gentleman stepped in and asked to see it.  He studied it through a glass, quietly peeled off five $100 banknotes, and left.  He never identified himself.  Not long afterward the Elizabeth piece turned up in a sale at Christy's in London.  It brought $20,000."  The one-of-a-kind medal had been ordered by Queen Elizabeth I for Sir Francis Drake in commemoration of his victory of the Spanish Armada.
The McAleenan pawnshop remained in the Eighth Avenue building at least through the Depression years.  By 1984 Frames By You, a do-it-yourself framing shop was in the space.   It was replaced by Chelsea Frames in 1989.  Today the space in the venerable building, home for decades to the H. McAleenan pawnshop, is a delicatessen.
photographs by the author
LaptrinhX.com has no authorization to reuse the content of this blog.
Posted by Tom Miller at 1:17 AM