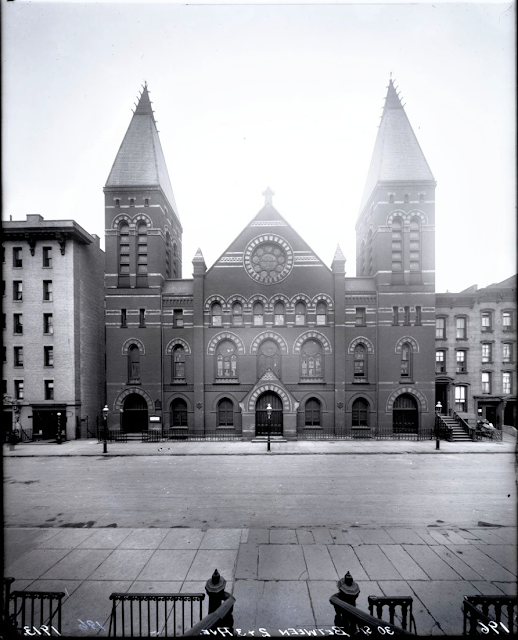 In February 1853 the newly formed congregation of the Madison Square Presbyterian Church purchased a building plot on Madison Avenue and 24th Street, overlooking Madison Square.  While its new location was one of the most fashionable in the city, not far away, near the East River, things were much less affluent.
In 1856 Rev. Dr. William Adams, pastor of the church, prompted the formation of the East Side Sunday School in the gritty neighborhood.  Originally meeting in a carpenter shop, it later moved to a building on Third Avenue between 30th and 31st Street.  Among the teachers was Theodore Roosevelt, father of the future President.
The East Side Sunday School evolved into the Memorial Chapel.  On September 15, 1874 the New York Herald reported, "The corner stone of the 'Memorial Chapel' of the Madison Square Presbyterian church, Thirtieth street, between Second and Third avenues, was laid yesterday, with appropriate exercise."  The "large number of people" heard "an address by the venerable Rev. William Adams," and "some interesting remarks by Rev. Charles Payson, who is to be the pastor of the new chapel."
Designed by J. Cleaveland Cady, the building cost $120,000 to construct, more than $2.8 million today.  It was designed in Cady's own take on Sicilian Romanesque Revival.  Faced in red brick and sparsely trimmed in stone, its uncompromisingly symmetrical design featured two tall bell towers with pyramidal roofs, and a central gabled pavilion with arched openings and a large rose window.
The chapel was dedicated on January 27, 1876.  Rev. Charles H. Payson would not lead his flock for long.  Almost a year later to the day, on January 24, 1877, he died of pneumonia.
Rev. E. A. Elmore took the pulpit until 1884, when he resigned "on account of failing health," according to the New-York Tribune.  He would not be permanently replaced for two years.
Major change to the Memorial Chapel came in 1886.  On January 22, 1886 The New York Times reported, "The Memorial Chapel of the Madison-Square Presbyterian Church was organized last evening as an independent church under the title of the Adams Memorial."  It was named in honor of the nearly legendary Rev. William Adams of the Madison Square Presbyterian Church who had died four years earlier, on August 31, 1880, of liver disease.
A few weeks later, on March 7, the new pastor, Rev. Jesse F. Forbes, was installed.  There were 276 members within the congregation at the time.  They came from diverse ethnic backgrounds and most struggled financially.
Rev. Forbes responded to the needs of his congregation.  The New-York Tribune explained that a feature of the Sunday School was the Home Department.  "By this department, mothers and others who cannot attend the school are supplied with books and courses for home instruction and meet occasionally for review and direction."
Children and teens were lured from the temptations of street life by the Young People's Society.  On January 27, 1888 The Evening World reported, "The Young People's Association of the Adams Memorial Presbyterian Church gave a musical and literary entertainment in the Sunday-school hall of the church last evening."  The journalist was particularly taken with one number:

The most interesting event of the evening was the 'broom drill' of the Amateur Cadets, composed of sixteen young ladies, attired in pretty cream-colored gowns, trimmed with red, and wearing caps made of the same material.  Under the captaincy of soldierly Mr. MacConnell, the young ladies performed military evolutions with the accuracy and precision of trained soldiers, considering the difficulty of handling their improvised guns.

Five months later, on May 17, another performance was staged.  The Evening World reported, "The musical and dramatic talent of the Adams Memorial Presbyterian Church, in East Thirtieth street, gave an interesting entertainment in the church last evening under the management of the Young People's Society."  The article noted, "The farce, 'The Elevator,' brought down the house."
Around 1898 a group of Armenian refugees began worshipping together in the Adams Memorial Church.  On December 26, 1900 the New-York Tribune explained that many of them "fled from their own country at the time of the Turkish massacres."   The article said, "It was lately decided that they had become strong enough to organize into an independent body, and it was resolved by them to form a congregation of their own."
The new Armenian Evangelical Church installed its pastor, Rev. Haigag H. Khazoyam, on December 30, 1900.  For decades to come the two congregations would share the East 30th Street building.
On January 27, 1906, as the Adams Memorial Presbyterian was celebrating the 30th anniversary of its building, the New-York Tribune commented on the congregation.  "As an East Side parish in a fluctuating neighborhood with an ever changing but never decreasing membership this congregation claims its chief distinction.  It is an international church, administering to members of sixteen different races." 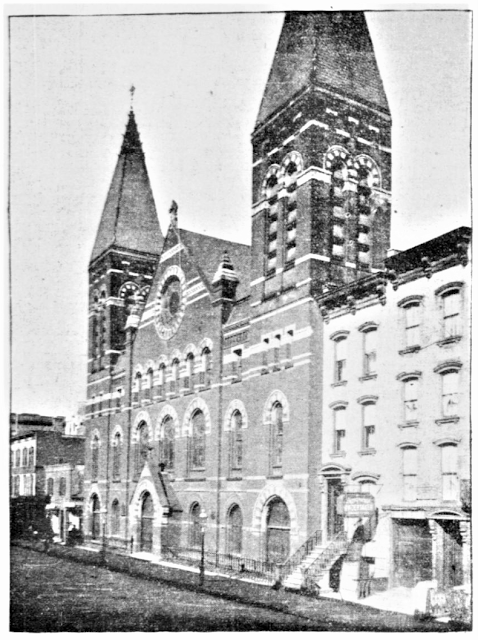 New-York Daily Tribune, January 27, 1906 (copyright expired)
The low-income neighborhood presented problems.  On February 13, 1908 The Sun reported that Rev. Forbes "complained to Capt. Byrnes of the East Thirty-fifth street police station last night that he is growing wearing of having windows repaired that are constantly being broken by boys of the neighborhood."  The damage was not the result of vandalism, but of stick-ball played in the street outside.  "He said that within the past week at least one hundred panes of glass in the church and neighboring houses have been shattered by boys who play ball in East Thirtieth street."
During the Great Depression the congregation pitched in to save money on repairs and decoration.   The pastor, Rev. H. S. Rambo and 40 congregants wielded paint brushes and hammers "in their spare time throughout the Summer," according to Pictorial News of the World.  The article said the volunteer work saved the church $2,400.
The end of the Adams Memorial Presbyterian Church in the building came in 1949 when it was sold to the Columbia Broadcasting System.  Named the 30th Street Studios, the building was renovated with the removal of the bell towers and the refacing of the first floor. 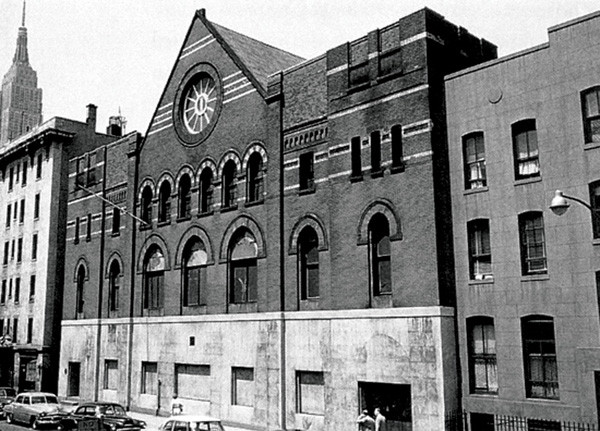 (original source unknown)
According to the 2004 book Studio Stories, "The magical acoustic properties that would soon be 30th Street's trademark would not have been immediately apparent to anyone who first entered 'The Church.'"

Mitch Miller, Columbia's head of A&H at the start of the 1950s, immediately saw the enormous potential of 30th Street's palatial interior.  Once Miller and the Columbia crew had tweaked the building to perfection, Miller issued a directive strictly prohibiting any kind or physical alteration of the main studio.  Janitors weren't even allowed to wash the floors.

Some of the 20th century's most important recording artists worked here.  Bill Christine, in his 2017 They Left Their Hearts in San Francisco, said it was "where Bob Dylan and Miles Davis did some of their best work; there Leonard Bernstein burnished the score for West Side Story; where Glenn Gould recorded Goldberg Variations; where Vladimir Horowitz worked most of the time.  'I wouldn't record anywhere else,' Davis said."
Barbra Streisand recorded her The 1962 Studio Recordings album here, adding her name to artists like Tony Bennett, Duke Ellington, Count Basie, Frank Sinatra and Isaac Stern who worked in the 30th Street Studios.
And then, on January 15, 1981 The New York Times reported, "According to a CBS spokesman, the rumors that the company plans to sell its 30th Street recording studio are true...There were reports that the buyer planned to demolish the building and construct an apartment house on the location."  The article said that not only had it been used by famous musicians and vocalists, but for recording "many Broadway shows, from 'South Pacific' and 'My Fair Lady' to 'A Chorus Line' and 'Barnum.'"
Musicians like Isaac Stern, Frank Sinatra, Itzhak Perlman and Pinchas Zukerman threw their support behind a preservation campaign.  The New York Times added, "the New York City Landmarks Preservation Commission is investigating the matter."  Their efforts fell flat. 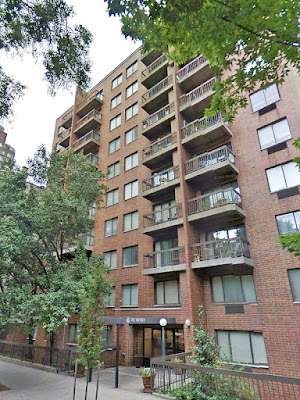 photo via cityrealty.com
The ten-story Wilshire apartment building was completed in 1985 on the site.
Many thanks to reader Ted Leather for requesting this post
no permission to reuse the content of this blog has been granted to LaptrinhX.com
Posted by Tom Miller at 2:02 AM