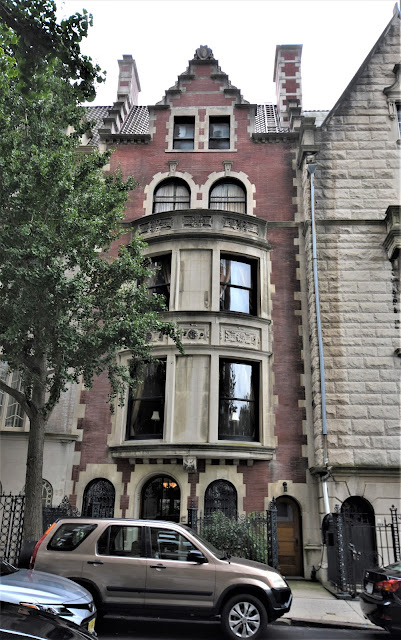 By 1897 architect Clarence Fagen True had become successful enough to form his own development firm, the Riverside Building Co.  That year he designed and began construction of six upscale homes that wrapped the southeast corner of Riverside Drive and West 81st Street.  The architect had made his mark working in historical styles and this group would be patently Clarence True.
Completed in 1898, of the three 81st Street residences, 320  stood out with its vivid red brick and stone façade.  Inspired by the Elizabethan Renaissance, it rose four-and-a-half stories to a stepped gable.  A two-story bowed oriel dominated the design; its white limestone standing out against the deep red brick.  It provided a solid-walled balcony to the fourth floor.
True sold the residence to Charles Joseph Sewall and his wife, the former Anna Brooks Wellman.  The couple had been married in 1875 and had four children, Henry Foster, Edith Brooks, Otis Prescott and Duer Irving.
Charles Sewall was president of the Commercial Union Insurance Company of New York.  He came from an old New England family and among his early ancestors in America was Samuel Sewall, the first chief justice of Massachusetts.
He was born in Brooklyn in 1848, the son of merchant and print collector Henry F. Sewall.  Henry had died in 1896 and his astonishing collection--some 23,000 works by artists like Rembrandt, Dürer and Whistler--was sold at auction in 1897.  Charles "inherited his father's fondness for books and art," according to The Weekly Underwriter, and filled the new residence with a fine library and collection of paintings.
Late in November 1898, only a few months after the family move into their new home, Charles became too ill to go to the office.  Doctors diagnosed Bright's Disease, a kidney disorder known today as nephritis.  The Weekly Underwriter said, "an unfavorable diagnosis of his condition by his physicians greatly depressed him, and apparently he gave up hope and the fight at once."
Five weeks later, around midnight on December 28, Charles died in his sleep at the age of 50.  Black and White, a monthly insurance journal, reported, "His funeral was from his residence, 320 West 81st street, New York city, and was largely attended by the fire underwriters of that city."
The Sewall children were all approaching or had reached young adulthood at the time.  Henry, Edith, Otis and Duer were 22, 20, 19 and 17 years old respectively.  Otis was attending Harvard University.  Five years later, in 1903, Anna moved to Bronxville, New York and leased 320 West 81st Street to David Walter McCord.
McCord was vice president of the Western Steel Car & Foundry Co.  He and his wife, the former Fannie Eliza Davis, had had a nine-year-old daughter, Dorothy Davis.  Shortly after moving into the 81st Street house, on June 7, 1903, a second daughter, Janet, was born.
By 1909 Anna Sewall was leasing the mansion to Andrew Mills, president of the Dry Dock Savings bank founded by his father, also named Andrew Mills, in 1848.  The younger Mills had been president since his father's death in 1879.   He and his wife, Aimee Gabrielle Alexander had a son, Herbert Lawrence Mills.
Still unmarried, Herbert, lived in the residence with his parents.  A graduate of Princeton University, he was the bond salesman of the Wall Street brokerage firm of Edward B. Smith & Co.
Anna Brooks Wellman Sewall died in Bronxville on March 14, 1917 at the age of 69.  The estate continued leasing the 81st Street house to the Mills family for five more years, selling it in 1922 to Dr. Hugo Julius Leobinger and his wife, Sophia M.
The 59-year-old Leobinger was educated at the Universities of Erlangen and Heidelberg in Germany, where he held the title of Baron.  He established his medical office in the mansion.  The widely-talented Sophia Monte Neugerger Leobinger was journalist, singer, orator and pioneer suffragist.  She was editor of The American Suffragette. 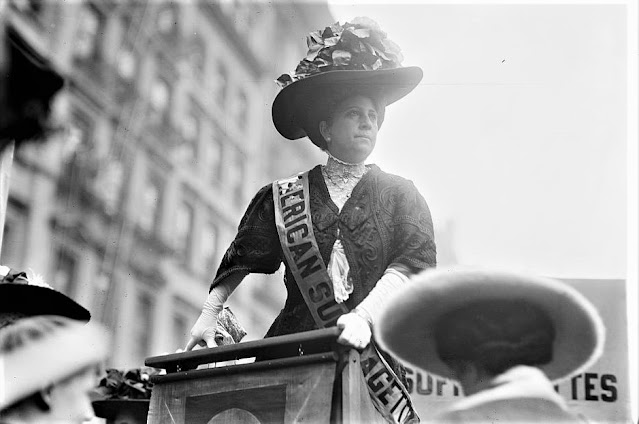 A determined-faced Sophia addresses a rally outside City Hall.  from the collection of the Library of Congress
Just two years after moving in, Leobinger was in serious legal trouble.  Police raided his office, arrested and jailed him without bail.  On September 6, 1924 the Medical News reported, "Dr. Hugo J. Loebinger and three ex-convicts were arrested, August 23, charged with attempting to swindle a wealthy Manhattan furrier out of $7,000."  The article said Loebinger "is alleged to have been the go-between for the ex-convicts and the furrier."
Happily for the doctor, Magistrate Simpson of the West Side Court dismissed the charges against him on September 15.  The severe damage to his reputation and his practice had already been done, however.  Before the year was out he sued three members of the Bomb Squad and two others for $202,642 in damages for false arrest.  The New York Times reported on December 25, "The police, he said, entered his office, accused him of leading 'a Jekyll and Hyde' existence, and contended he was mixed up with a gang of international crooks." 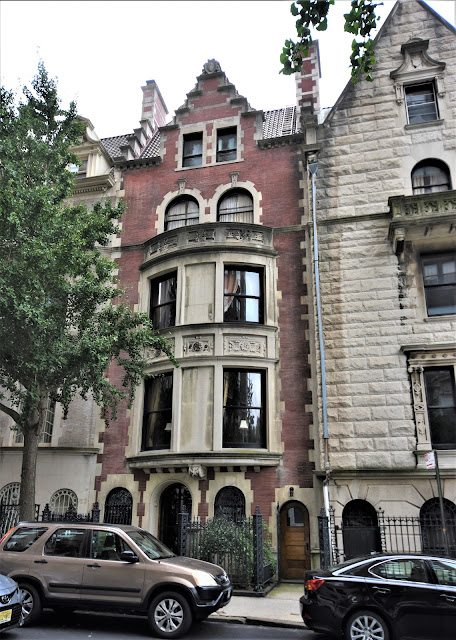 In 1954 the upper floors of 320 West 81st Street were converted to two duplex apartments.  The ground floor continued to house the doctor's office.  While the doctor's office remained after 1964, the upper floors returned to a single residential space; and a subsequent renovation, completed in 2003, returned it to a true single-family home.
photographs by the author
LaptrinhX.com has no authorization to reuse the content of this blog
Posted by Tom Miller at 1:07 AM