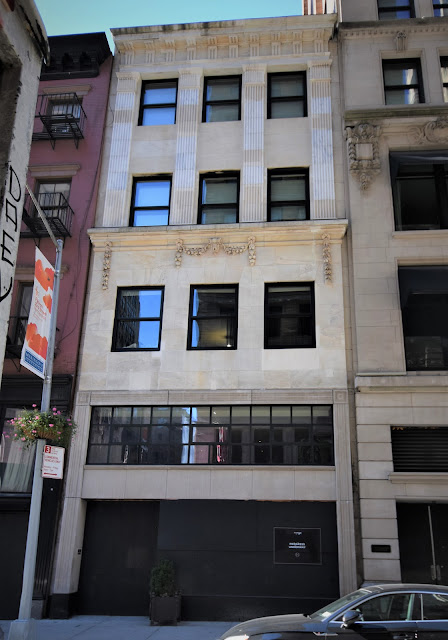 In 1866 Miller's Stranger's Guide to New York described the area around Madison Square, saying "The houses surrounding this park include some of the most elegant of this city."  Around seven years earlier a handsome, high-stooped residence had been erected at 12 West 28th Street, between Fifth Avenue and Broadway.
The owner advertised in September 1859:  "Wanted--A first rate waitress; must be neat looking and have the best of city references.  Scotch or Welsh preferred."  Waitresses were more polished than servants like chamber maids.  Among their duties was the serving of meals in the dining room and tea in the parlor.
By 1867 the house was home to the Frederick William Rhinelander family.  Born in 1828, Rhinelander was married to the former Frances Davenport Skinner.  The socially-prominent couple, who had eight children, maintained a villa in Newport, Rhode Island.
Frederick Rhinelander's sister, Mary Elizabeth, had married Thomas Haines Newbold in 1846.   The Newbold family was as prominent as the Rhinelander family.  Both traced their ancestry in America to the 17th century.   The Newbolds' country estate, Fern Tor, sat on the banks of the Hudson River above Poughkeepsie.
Thomas Newbold died on March 12, 1869.  Frederick Rhinelander and his family were still listed at 12 West 28th Street in 1870, but before long Mary Newbold and her children, Thomas, Frederick, Catherine and Edith, moved in.
By the 1880's affluent families were moving northward as commerce inched into the neighborhood.  In March 1890 Mary Newbold leased the house to the Actors' Fund, and then hired architect G. P. Graves make renovations totaling about $59,000 in today's money.  The plans called for altering walls, "internal alterations," and a new front.
The Actors' Fund of America had been founded in 1882 to "foster and benefit the physical, as well as advance the intellectual, welfare of the actors of America."  On the parlor floor of its new home on West 28th Street were the reception room and reading room, and in the rear two offices.    The New York Amusement Gazette reported, "The remainder of the building will be rented out as offices to different branches of the profession."  Offices on the second floor were leased to the Dramatic Exchange, and to the Horace Wall American Amusement Agency.  Years later, in 1913, The New York Clipper would recall, "These offices were handsomely fitted up.  The walls were papered in gold."  On the third floor was the Actors' Fund committee room, "and no one was admitted to it but the trustees," said the newspaper.
The former English basement level was home to Carl Wernicke's "bric-a-brac shop" by 1891.  The "art room" where paintings and statuary were displayed was behind the main shop.  On January 24 that year Mr. and Mrs. De Ford picked out a jardinière and asked that it be converted to a jewel case at a cost of $35 (more than $1,000 today).
A few days later the returned, and said that rather than have it delivered they would take it themselves.  They paid for the piece and took along two statuettes for wedding presents, "if they were deemed suitable."  On February 16 they returned again, saying the statuettes would not do, and began browsing for something else.  De Ford wandered into the art room, while his wife waited.
Suddenly, she told a clerk that she was going shopping at Macy's and left.  Five minutes later De Ford came out of the back.  The Sun later said, "De Ford wore a bulky, shaggy overcoat, closely buttoned, and Mr. Wernicke noticed that it bulged."  The bulge was the result of "jewels and silverware, valued at over $7,000" stuffed in his pockets.
As it turned out, Mr. De Ford was Robert Howe, "otherwise Ralph Hamberg, otherwise De Ford," and his wife was Nettie Hamburg, "otherwise Nettie Kirby, the reputed wife of Howe."  And Wernicke was only one of their victims.  When they were tracked down and arrested, the "plunder" found in their rooms was brought to court as evidence.  The Sun reported on September 29, 1891, "Jewels in almost every conceivable form for woman's wear flashed upon the prosecutor's table yesterday...A hamper full of antique silverware stood at one end of the table.  Near the table were three trunks filled with fine clothes."
In the meantime, the Actors' Fund assisted down-at-the-heels thespians, often paying their medical or funeral expenses.  On April 23, 1894 The Evening World reported, "Only a dozen people were present at the obsequies over the body of Adele Waters, the young actress who died at the Bellevue Hospital...The services were held at noon yesterday at the Actors' Fund rooms, 12 West Twenty-eighth street."
Around 1899 George Busse moved his shop into the former Wernicke space.  A publisher of art reproductions, he also used the shop to stage exhibitions of contemporary artists. 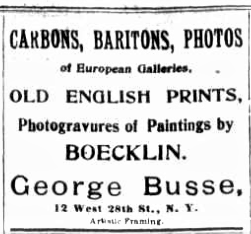 The Evening Post, October 27, 1900 (copyright expired)
On October 1, 1903 The Dowling-Sutton Music Publishing Company moved into an upper floor office.   In announcing the move, the firm noted, "Our latest Song Success are: 'In Those Happy Autumn Days,' 'You'll Always Be The Only Girl For Me,' 'My Mabel of Mulberry Bend,' 'The Sun Shines On No Sweeter Girl Than Mine, " Yo' Am De Best Soap Bubble Dat I Knows,' etc."
In December 1916 the Corn Exchange Bank signed a 21-year lease on the property.  The Evening Post reported, "A marble front and other changes made to meet the needs of the new tenant will be made from plans by S. Edson Gage.
Gage's plans, filed in January 1917, would completely transform the old brownstone residence into a modern bank building at a cost of about $535,000 today.  The stoop and front were removed and a gleaming white marble façade installed.  A grand, three-story arch dominated the design.  Below the intermediate cornice below the fourth floor, delicately carved festoons draped above the keystone and trailed down the sides.  Two-story fluted pilasters separated the openings of the third and forth floors. 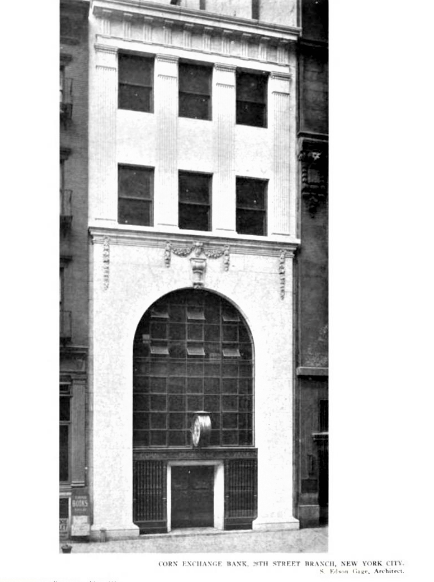 Architecture magazine, November 1917 (copyright expired)
The 28th Street Branch of the Corn Exchange remained in the building until 1925, when it became home to the Gramercy Finance Corp. 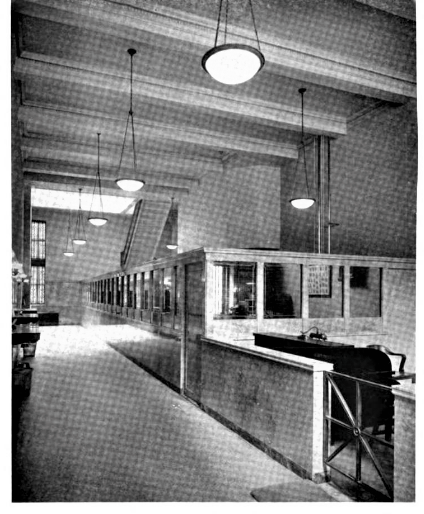 The main floor banking room.  Architecture magazine, November 1917 (copyright expired)
Starting in 1928 and lasting well into the Depression years, the bank housed the Modern Investment and Loan Company.  In 1936 the structure was altered and it was most likely at this time that the arch, which so closely identified the building as a bank, was removed and replaced by square-headed openings. 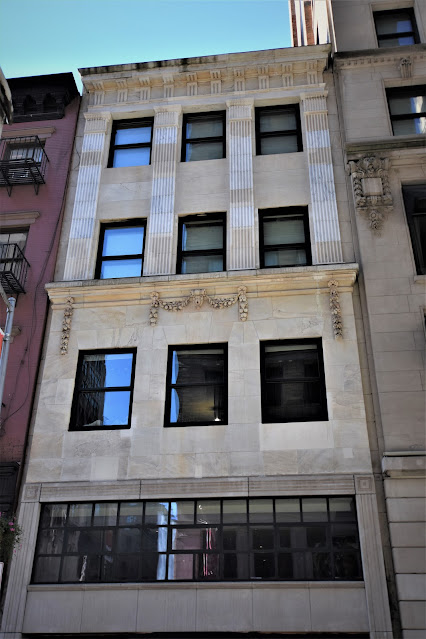 A recent renovation replaced the bottom two floors.  Happily, the neo-Classical swags of S. Edson Gage's 1917 design and his regal upper floors survive.
photographs by the author
LaptrinhX.com has no authorization to reuse the content of this blog
Posted by Tom Miller at 1:11 AM