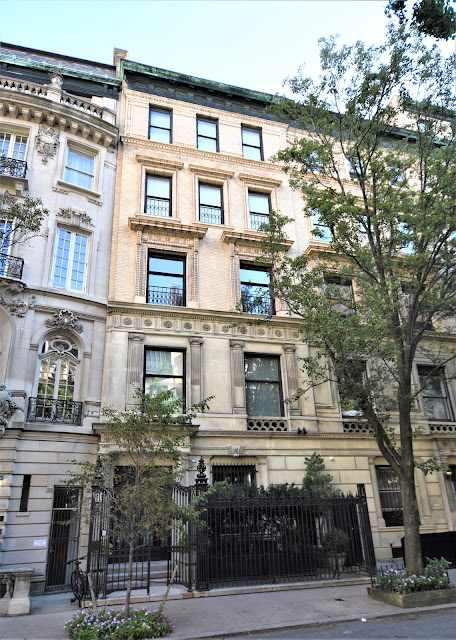 In 1895 real estate developer Daniel Hennessy completed an elegant row of four 25-foot-wide homes at 7 through 15 East 82nd Street, between Fifth and Madison Avenues.  Designed by Henry Andersen, the easternmost mansion, No. 7, like its siblings, rises five stories, with three floors of yellow brick sitting atop a two-story limestone base.  An imposing five-foot-high iron fence and gate surrounds the areaway.  The entrance, above a three-step stoop, sits within fluted Greek Doric columns that support an entablature decorated with rosettes and triglyphs.
Those elements reappear at the second floor, where Doric pilasters flank the openings and uphold a frieze embellished, again, with rosettes and triglyphs.  Elaborate terra cotta frames surround the third floor openings.  Between the brackets of their prominent cornices flank the rosette motif is continued.  The triglyphs and rosettes would make yet one more appearance in the frieze of the copper cornice.
On November 5, 1897 The Jewish Messenger reported that Edward J. King, Jr. had married Jessie Rosette Ickelheimer two days earlier.  The groom was 43 years old and the bride was 26.
The following year, on August 11, 1898, The New York Times reported that Daniel Hennessy had sold 7 East 82nd Street to King.  The New York Herald placed the price "at about $85,000" (around $2.74 million today).
Edward was a partner with his brothers David and Bennett in the furrier firm of Edward J. King & Sons.  Jessie, whose parents had both died prior to the wedding, had grown up in affluence.  Her father, Isaac Ickelheimer, had been a member of the stock brokerage firm Heidelbach, Ickelheimer & Co. and a director in several banks. 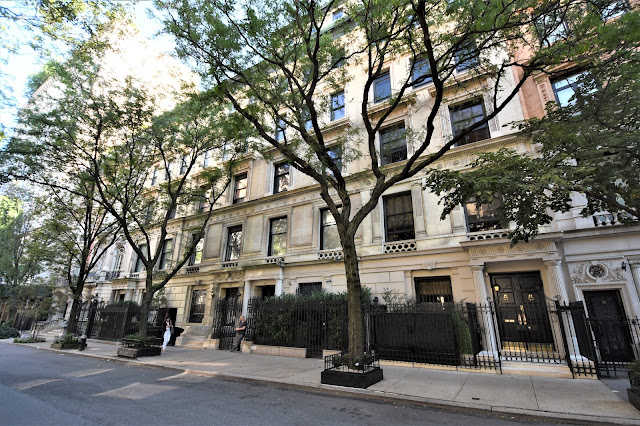 The four neo-Classical style residences form an elegant, dignified row.  7 East 82nd east at the far left.
It appears that Edward's busy work schedule did not always suppress Jessie's travel plans.  On January 27, 1901, for instance, the New York Herald reported, "Mrs. Edward J. King, of No. 7 East Eighty-second street, will leave for California during February.  She will give her last at home for the season on Friday afternoon."  ("At homes" were the published days when other socialites were welcome to call.)
More often, of course, the couple traveled together.  On July 30, 1905 the New-York Tribune reported that among those "returning to the Mount Washington [Hotel]" in Bretton Woods, New Hampshire in the White Mountains were the Kings.  Two summers later they used millionaire Levi P. Morton's Pine Brook Camp on Upper Saranac Lake for the season.
After being in the 82nd Street mansion over a decade, in 1911 King commissioned the well-known architect John H. Duncan to update the interiors.  The "general alterations" cost the equivalent of around $141,000 today.
The Kings leased the house for the winter season of 1914-15 to Elihu Root, Jr. and his wife, the former Alida Stryker.    They had barely settled in when the couple became a trio.  The Utica Sunday Tribune reported, "Tuesday, October 13, a son was born to Mr. and Mrs. Elihu Root, jr., of 7 East Eighty-second street, New York City.  This is their first son and has been named Elihu Root, 3d, being a grandson of United States Senator Elihu Root."
Incursion of commerce into exclusive residential neighborhoods had been the bane of millionaires for decades.  Although the property along the 82nd Street block was protected by restrictive covenants that prevented the homes being used for commercial purposes, that was not the case on Madison Avenue.  Early in 1928 Edward J. King alerted his neighbors that undertaker Frank E. Campbell had laid plans for an upscale funeral parlor at the corner of Madison Avenue and 82nd Street.
On January 14 The Evening Post reported that the "silk stocking residents" opposed the plan.  The article explained that "fear that scenes like those that accompanied the funeral of Rudolph Valentino may occur in the midst of their exclusive neighborhood have led prominent property owners of the section to protest."  A letter to the neighbors signed by Edward King warned that their property values would drop by 25 to 33 -1/3 percent.  It said, as well:

In addition, conveyances bearing corpses of the deceased would presumably drive up with their burdens at all hours of the day and night, since the business of the mortician is known as one where the telephone never sleeps.

Frank Campbell had already purchased the property, however, and the efforts of King and his well-to-do neighbors were fruitless.
Jennie Rosette King died on May 20, 1933 at the age of 62.  Edward survived her by two years, dying in the mansion on October 11, 1935 at the age of 81.

The following year The New York Times detailed the distribution of his estate, reported at $3,110,201--more than $58 million in today's money.  Because the Kings were childless, much of the fortune went to charities, including Lenox Hill Hospital, the Trudeau Sanitarium, the Henry Street Settlement and the New York Association for the Blind.  King was generous to his loyal servants, as well.  Two maids received the equivalent of $280,000 today; and three other live-in servants received the equivalent of $187,000.
In July 1939 the King estate leased the 82nd Street mansion to Dr. Harry Gold, with the option to buy.   The New York Sun noted a surprisingly early amenity, saying the house "contained an electric elevator and is air-conditioned."  The article said, "After alterations are completed, the house will be occupied as an office and home."
Gold was a 1919 graduate of Columbia University.  Born in Russia on December 25, 1899, he was brought to the United States as an infant.  He was now a heart specialist connected with the Cornell University Medical College.  His wife, Bertha, was a professor of physiology at Hunter College.  Of their four children, three--Stanley, Muriel and Naomi--would all pursue medical careers.
Dr. Gold took advantage of his option to buy in 1942.  Five years later he became a professor of clinical pharmacology at Cornell University Medical College and would become the consulting cardiologist at Beth Israel Hospital and at the Hospital for Joint Diseases.
By 1967 he had established the Harry Gold Research Fund for Human Pharmacology, Inc., with offices in the house.  A pioneer in developing modern potent forms of digitalis for heart disease, he was given the Award of Distinction of the Cornell Medical College Alumni Association in 1971, which cited him "as founder of clinical pharmacology, which concerns the effect of drugs on man rather than on other species, and provides basic principles for evaluating the efficacy, potency and toxicity of drugs."
On April 21, 1972 Dr. Gold suffered a fatal stroke in the 82nd Street house.  He was 72 years old.  Bertha Gold died on December 25, 1987 at the age of 91. 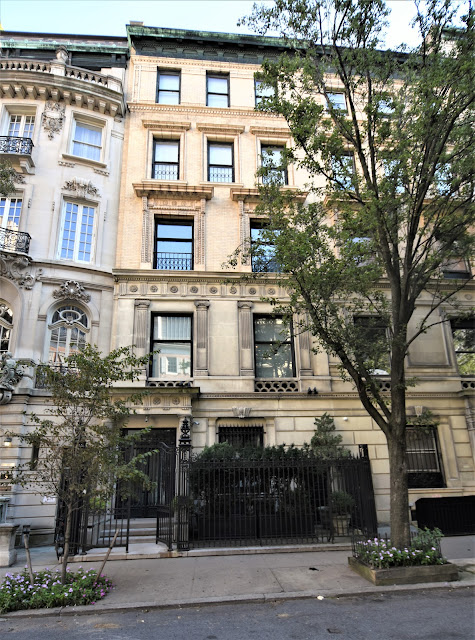 The mansion remains a single family home today.  Interior renovations were completed in 1992, but the exterior is essentially unchanged since Edward and Jessie King moved in nearly 125 years ago.
photographs by the author
LaptrinhX.com has no authorization to reuse the content of this blog
Posted by Tom Miller at 1:54 AM