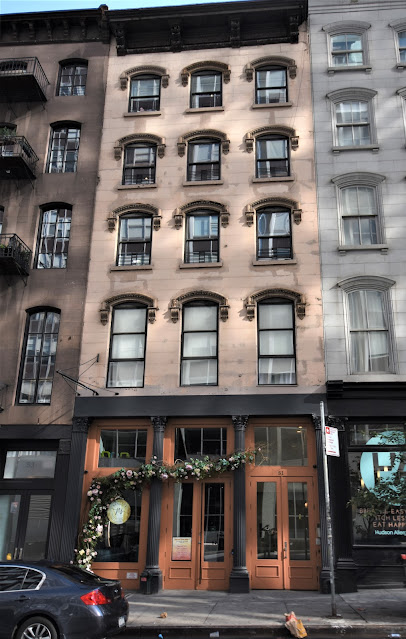 In 1833 Trinity Church endowed the Orphan Asylum Society with property including 51 Murray Street in the fashionable neighborhood near City Hall.  A house stood on the lot, as evidenced by a woman's frantic notice in the Morning Courier & New York Enquirer two years earlier:

Lost--On Monday evening, February 21st, dropt on the stairs in the House No. 51 Murray street, a very heavy splendid English black VEIL, the property of the lady of Stephen H. Gimber, the Engraver.  It is one yard and a half long, the border a large massy flower pattern, nearly half a yard deep, vandyke edge; the flowers over the whole are large, terminating in a sprig, and an egelet in the centre.  Pawnbrokers are requested (if an article answering this description should be offered) to stop it, and dry goods stores or private individuals having purchased such an article, will greatly oblige by sending to the store of Mrs. G. Newcombe, 297 Broadway, and all expenses incurred shall be paid.

The Orphan Asylum Society leased the house.  Although the  wealthy gunsmith Orison Blunt took over the lease in 1851, he apparently sublet it to retired dentist Isaac I Greenwood, who had occupied it since at least 1847.   (Blunt and his wife, Anna, lived in Bloomfield, New Jersey.)
In 1854 Greenwood moved to West 14th Street.  He, no doubt, had little choice.  It was around that year that Blunt demolished the old house and began construction on a modern loft and store building.  Completed in 1856, the five-story building was a handsome example of commercial Italianate design.  The cast iron storefront featured fluted Corinthian columns and pilasters which upheld a cornice (now lost).  The upper floors were faced in brownstone, their openings crowned with attractive cast iron hoods.  A bracketed Italianate cornice completed the design. 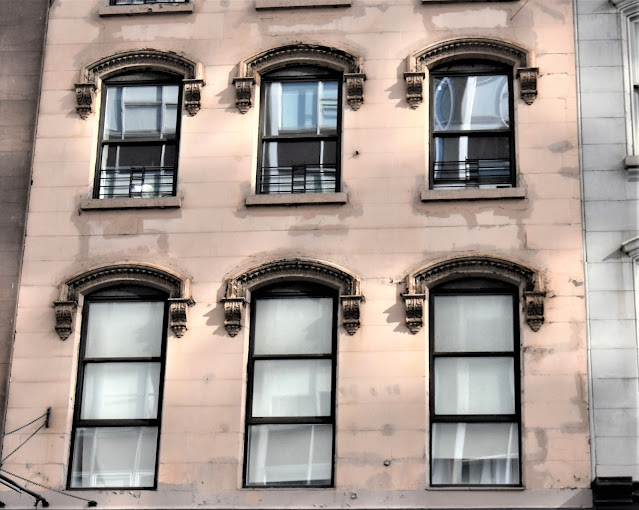 The attractive cast iron lintels were almost assuredly chosen from a catalog.
Among Blunt's initial tenants was Carhart, Bacon & Clark, here in 1856.  Founded by William Carhart, Eben F. Bacon, and James R. Clark, the dry goods firm imported "cloths, cassimeres & vestings."  In the building at the same time were the apparel firm of Runa E. Boughton, importer John E. Davidson, and Barberie Throckmorton (listed only as "merchant").
Oysters were a major part of 19th century New Yorkers' diets.  Peddlers sold the shellfish from push carts, and oyster restaurants and saloons were popular throughout the city.  The ground floor of 51 Murray Street was home to what an advertisement called "a new and handsome oyster stand."
On April 23, 1856 R. E. Boughton placed an advertisement in the Mourning Courier & New-York Enquirer:

Spring and Summer Clothing at Wholesale--Great inducements are offered to cash buyers, from a well-assorted stock of fashionable garments of every description.  Also a full sock of coarse Clothing for country trade.

A few months later Carhart, Bacon & Clark nearly fell victim to a swindler.  A merchant who identified himself as M. Swartz purchased a substantial amount of merchandise.  It was  not until after the goods were delivered that the firm realized it had been duped.  On June 25, 1856 The Evening Post reported that Officer Furey arrested Swartz just as he was boarding the steamship Arabia.  The article said "Messrs. Bacon & Co., 51 Murray street...charge him with having obtained from them $650 worth of dry goods, under false and fraudulent pretences [sic]."  The firm narrowly escaped losing the equivalent of $20,500 in goods.
The building continued to house dry goods and apparel firms in the post-Civil War years.  The occupant of the third floor in 1869 was a garment manufacturer, possibly Jaroslawsky & Bros., which had been here as early as 1861.  That summer the firm was looking for "a few good ironers on balmoral skirts." 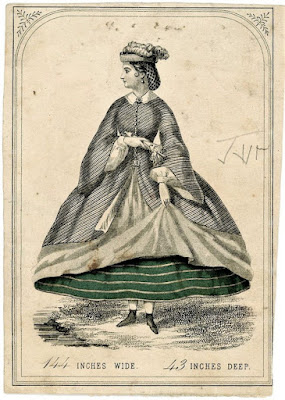 A fashion plate shows a lady lifting her outer skirt to reveal her green Balmoral skirt.
Popularized by Queen Victoria, the Balmoral skirt, or Balmoral petticoat, was a colorful garment worn over crinoline or hoop skirts and under the outer skirt.  They were often bright red  wool with black stripes, but sometimes came in plaid.
The tenant list had begun to change by 1872 when Wilson, Lockwood, Everett & Co. operated from 51 Murray Street.  The firm dealt in household goods.  Its wide variety of items including "Rumford" blacking, or shoe polish; "iron holders;" and food items like Hosford's Cream Tartar, Hosford's Bread Preparation, and the Rumford brand yeast powder.
The last decades of the 19th century saw china and glass merchants moving in.  Among them were Goldschmidt & Bros., John H. Marren, and John R. Gibney.
In 1880 Julius Wile & Bros., wine importers, joined the tenant list.  Founded in 1872 by German-born brothers Julius and Isaac Wile, the firm had a crew of salesmen who traveled nation-wide.  In 1888, Illustrated New York, the Metropolis of To-Day touched on the staggering variety of goods it sold.  "The premises they occupy are spacious, commodious, and are completely stocked with a choice selection of brandies, whiskies, rums, gins, champagne, claret, sauternes, burgundies, sherries, port, cordials, etc."  The firm remained at 51 Murray Street into the 1890's.
The Blunt family relinquished its lease on the property (still owned by the Orphan Asylum Society in the City of New York) in 1881.  Although the Frazer Lubricator Co. took over the lease, it acted only as a landlord and did not move its offices into the building.
Mamie Mockley was employed here in 1890 when she suffered, according to her, a horrifying ordeal.  An article in The World on September 5 explained, "To a World reporter she said that yesterday at noon a young man, in whom she had the utmost confidence, called at the factory where she was employed, and at his request she went out with him.  They visited many places of public resort, drinking, as she supposed, soda water and other light beverages."  The 20-year-old stressed that she had never tasted alcohol.
At 8:00 that night Mamie plunged from into the East River from a moving ferry.  The World explained, "In the evening she found herself in a ferryboat going from New York to Brooklyn.  She then realized that she had been deceived, and attempted to drown herself."
Mamie was rescued and taken to the Fifth Precinct Station House on Oak Street in Brooklyn in a patrol wagon.  Officials were less than sympathetic with the young woman.  She was charged with intoxication and The World reported, "The police of the Oak street station do not bear out the story told by Mamie."
Decades after moving in, the John R. Gibney glassware firm was still in the building in 1921 when the area was suffering a rash of burglaries.  On May 19, the Crockery and Glass Journal reported, "the downtown pottery district suffered considerably this week, when a daring band of thieves blew open eight safes in five different offices in the Gibbs Building, at Murray street and West Broadway."  The article said, "This is the second time within two weeks that the district has suffered from marauders," adding "J. R. Gibney & Co., 51 Murray street, also fell victim to the mysterious raiders two weeks ago."
In 1929 the Mitchell-Rand Mfg. Co. took over the lease and began alterations to convert the entire building for its own use.  Completed in 1931, the renovations resulted in a retail store at the ground floor, offices on the second, and warehouse space above.  The firm, which manufactured insulation, remained in the building until around 1965. 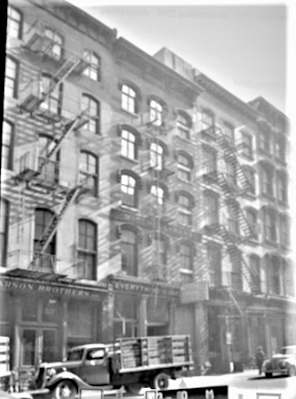 The cornice over the storefront was intact in 1941.  via the NYC Dept. of Records & Information Services
The building housed small manufacturers until 2009 when the upper floors were converted to apartments--one each on floors two through four, and a duplex on the fifth and newly-built sixth floor (unseen from street level). 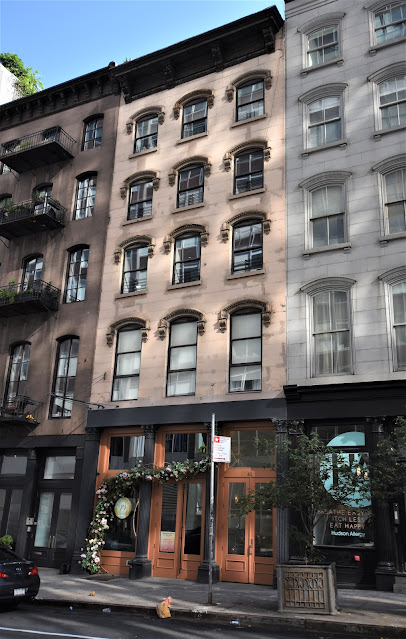 Orison Blunt's building has suffered some abuse.  Delicate pieces of the cast iron Corinthian storefront capitals have fallen off and the cornice directly above is gone.  The brownstone of the upper floors wears a coat of a stucco-like material that is peeling off.  But overall the handsome building retains its architectural integrity after 165 years.
photographs by the author
LaptrinhX.com has no authorization to reuse the content of this blog
Posted by Tom Miller at 1:25 AM