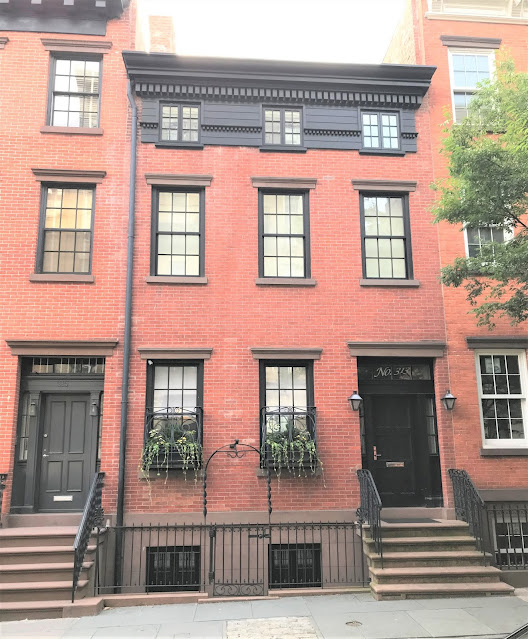 In the 18th century William Bayard's estate sat within the northwestern section of Greenwich Village.  (It was to Bayard's handsome Georgian home that Alexander Hamilton was taken following his duel with Aaron Burr in 1804.)  Following his death in 1826, his heirs began selling off portions of the Bayard Farm.
In April 1835 Charles W. Hawkins purchased land along the recently named West Fourth Street (the lane had been called Asylum Street until around 1834).  He divided the lots and resold them within the subsequent months.  Among the buyers was mason Henry M. Perine, who erected a two-a-and-half story brick faced house at 43 West Fourth (renumbered 313 in 1864).
Designed in the emerging Greek Revival style, its squat attic level replaced the dormers and peaked roof of the Federal style.  The single-doored entrance featured sidelights and an ample transom that allowed sunlight into the foyer.  Perhaps most eye-catching were the handsome iron stoop railings.  Their graceful design included palmettes above and below a central wreath. 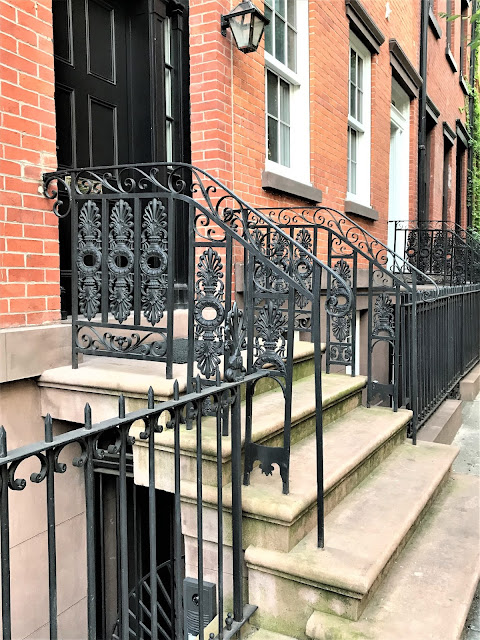 The flat blades within the empty spaces at the bottom of the railings were boot scrapers, a necessity before paved streets.
By the early 1840's the West Fourth Street residence was home to attorney Joseph C. Potter and his wife Cornelia.  The family took in a boarder, James Ferris.
Ferris was a weaver by trade.  Most likely unknown to the Potters, he had served time in the state prison twice for forgery.  He found himself in trouble again after a confrontation on February 1, 1842.  Ferris was drinking in the nearby porterhouse run by Henry Osborn when Peter Nodine came in looking for his son.  One way or another the two men got into a heated fight.  In court on April 20, Nodine claimed, "while there, Ferris assaulted him and bit the end of his thumb off."
Ferris brought a witness, a boy named Potter who may have been related to Joseph and Cornelia.  Potter worked in the tavern and testified that it was Nodine who made the assault and swore that Nodine "attempted to knock Ferris's brains out with a decanter."  The jury had to decide between the charges--one that Ferris had bitten off the thumb of Nodine, and the other charging Nodine with "attempting to gouge [Ferris's] eye out."  Ferris was found guilty and Nodine was acquitted.
On October 11, 1843 Joseph and Cornelia had a baby girl, Cornelia Livingston Potter.   Sadly, the Potters' parlor was the scene of the her funeral a year-and-a-half later, on May 13, 1845.
By 1851 Edward H. Jacot and his family lived here.  A coal and hardware merchant at 15 Gold Street, his was an substantial business.  On August 20, 1853 he announced the receipt of a shipment of "Steam and gas tubes--One thousand lap-welded English boiler tubes, 2 to 3 inches; 20,000 feet English gas tubing."
Jacot was born in 1811.  He had married Christina Isabella Forbes in 1833.  The couple had at least one daughter, Isabella.  The family's residency was short-lived.  In 1854 liquor importer Morris Livingston and his family, who had previously lived on Eighth Avenue, moved into the house.
In 1862 Frederick Livingston was enrolled in the introductory class of the Free Academy of the City of New York.  It was possibly the boy's age the prompted a servant to look for a new job that year.    An advertisement in the New York Daily Herald on November 14 read:

Wanted--A situation by a young American woman, to take care of children; has some knowledge of running a sewing machine.  Best city reference.

As the Potters had done, the Livingston family took in a boarder.  In 1873 William Latson, a driver, rented rooms, and in 1876 Henry M. Parr, who made his living as a clerk, listed his address with the family.
In 1879 313 West Fourth Street became home to the Henry M. Parr family.  Parr was in the produce business at 459 Greenwich Street, and Henry Jr. was an attorney.  The Parrs would remain here for years.  After it was sold to D. Sylvan Crakow in 1902, it was operated as a boarding house by a "Mrs. Borden."
On Friday, October 14, 1904, a middle-aged couple, James O'Neill and his wife, appeared at the door as asked for a room.  The Buffalo Enquirer said, "To Mrs. Borden, the landlady, they said, half-laughingly; that they were on a second honeymoon trip, but they told her nothing of their home."
The O'Neills seemed to have been on a spontaneous visit to the city.  "They said they might stay a week and see some of the wonders of New York," Mrs. Borden later explained.  On Sunday morning they planned to explore the city, but did not come down for breakfast.  The Buffalo Enquirer reported, "Their plans made for a day's outing, death claimed Mr. and Mrs. James O'Neill yesterday, just as their holiday dawned."  Mrs. Borden found them dead in their rooms.  The gas valve had not been fully closed and they died in their sleep.
In 1927 the house underwent a renovation which resulted in a tea room in the basement  and "non-housekeeping apartments" on the floors above (the term referred to the fact that they had no kitchens).  The configuration lasted until 1968 when the former tea room was converted to an art studio and gallery.  There were now one apartment on the parlor floor and two each on the floors above.
The art studio was home to the gallery of British artist Fiona Banner in the early years of the 21st century.  The space was regularly the scene of one-person exhibitions, like the debut of French artist Anne-Marie Schneider in February 2006. 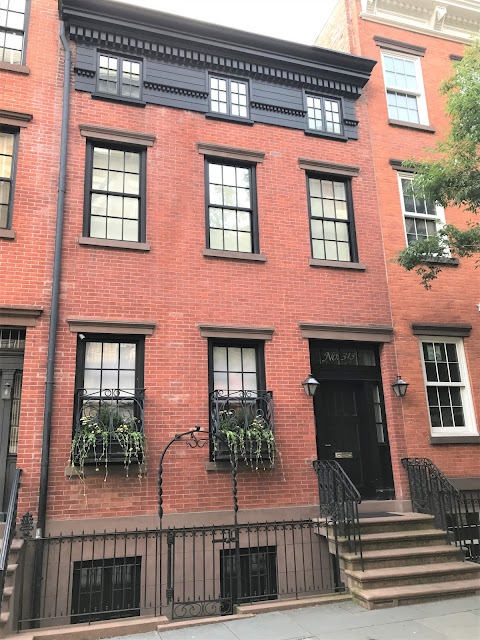 A gut renovation in 2018 brought the venerable house back to a single-family home.  While the 1836 exterior is remarkably preserved, nothing of the original survives inside.
photographs by the author
LaptrinhX.com has no authorization to reuse the content of this blog
Posted by Tom Miller at 1:11 AM