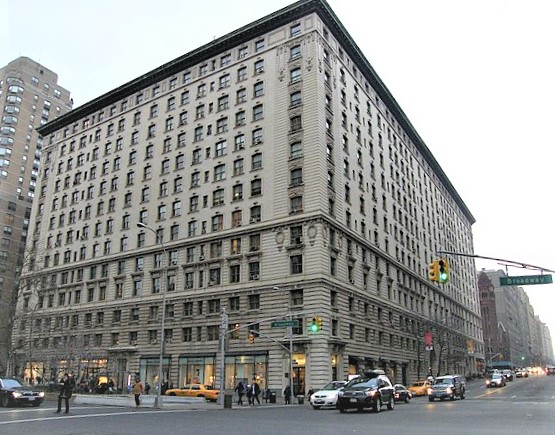 photo by Americasroof
On June 23, 1909 The New York World reported, "The largest apartment house in the world is being built on a site covering the entire block bounded by Eighty-sixth and Eighth-seventh streets, Broadway and Amsterdam avenue...It will be known as the Belnord.  It will house a community as large as that of many a town."
The Belnord was rising at a time when many affluent families were giving up private homes for the conveniences of sumptuous apartments.   On August 1, 1908 the Real Estate Record & Builders' Guide noted that The Belnord would not only be the largest, but "one of the highest grade apartment houses in the world."  The Belnord Realty Company had hired the architectural firm of Hiss & Weekes to design the leviathan structure that the New York World said "will contain 175 apartments, with 2,080 rooms, and the number of occupants, including servants will be 1,225."
Completed in 1909, the 12-story brick and Indiana limestone Belnord was designed in the Italian Renaissance style.  Notable was the large, landscaped courtyard, accessed by two arched carriage entrances on 86th Street (one for incoming and the other for outgoing vehicles), and a "footway entrance" on Broadway.  Residents were not subject to public view in alighting from their carriages or cars.  "All the entrances to the building proper open into the garden court," said an advertisement.    There were four entrances in the courtyard, one at each corner. 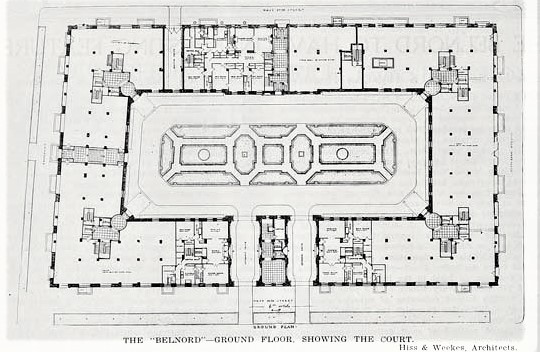 The court was accessed by two carriage entrances on 86th Street (bottom) and a pedestrian entrance on Broadway (left).  Entrances into the building were at each interior corner. The Record & Guide, November 7, 1908 (copyright expired)
The smallest of the apartments contained seven rooms.  Suites came with "two, three and four bath rooms and two or three servants' rooms and baths, according to the size of the apartment," said an advertisement.  For those families needing extra servants rooms, those were available elsewhere in the building.
To ensure residents a good night's sleep, almost all the bedrooms faced the courtyard.  Management explained, "the width of the court is greater than that of the average city street, thereby securing more privacy, quiet and sunlight." 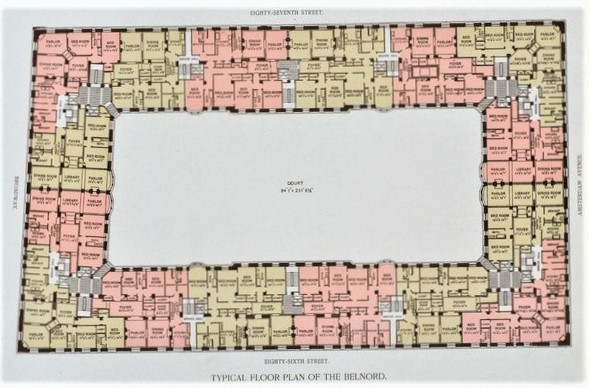 Each apartment had windows on the street and the courtyard.  from The World's New York Apartment House Album, 1909 (copyright expired)
The New York Times noted on September 4, 1908, "A remarkable feature of the house will be its sub-courtyard, which will lie beneath the central court and will be lighted with skylights and gratings.  No tradesmen's wagons will be allowed to drive into and stand around in the main courtyard, but will drive down into the sub-courtyard by means of an inclined driveway from Eighty-seventy Street." 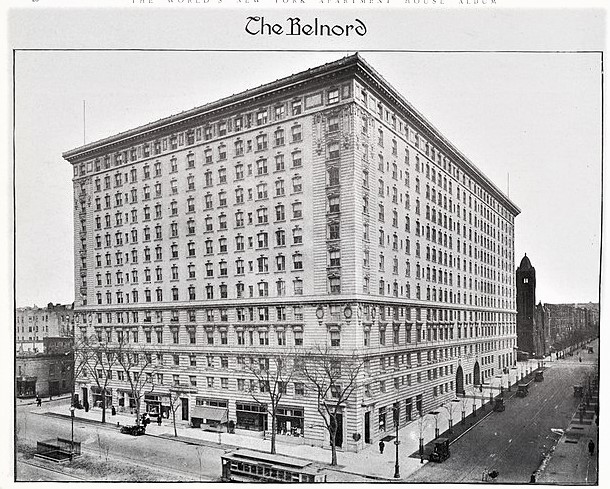 from The World's New York Apartment House Album, 1909 (copyright expired)
Residents would enjoy the latest in domestic amenities.  "All kitchens and pantries are equipped with specially designed gas ranges, porcelain-lined refrigerators and sundry other modern devices...including a garbage receptacle built in the wall and ventilated," said an advertisement.  The built-in refrigerators were capable of producing "ample ice for table use."  Each apartment had a wall safe. 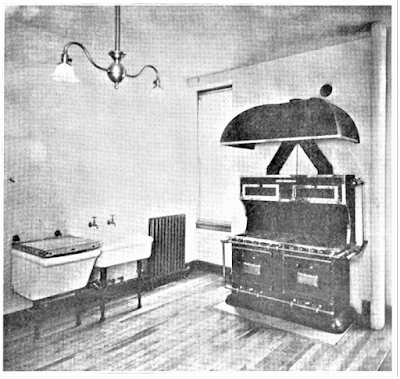 A "single laundry tray" was included in the kitchen, "saving frequent trips to the general laundry on the roof." Domestic Engineering, December 25, 1909 (copyright expired) 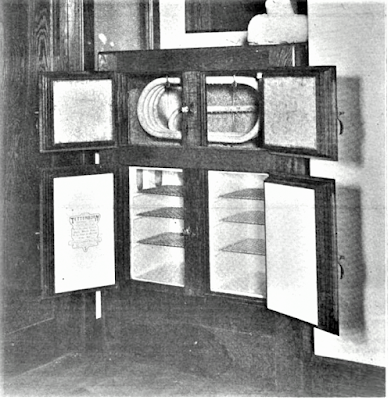 Domestic Engineering explained, "These refrigerators are attached to a refrigerating coil and do not use ice' the refrigerator is built in the wall, thus giving enlarge space in the room." December 25, 1909 (copyright expired)
The New York Times wrote, "The interior decorations of each apartment will be in the style of Louis XVI.  The doors will be of solid mahogany.  The floors will be of hard wood."  While there was a laundry on the roof with "individual tubs, ironing boards, and lines for each tenant," wash tubs in the kitchens provided maids the convenience of doing quick small jobs.
Rents in The Belnord in 1909 started at $2,100 per year--or about $5,125 per month in today's terms.
Among the initial tenants were John Jacob Taylor and his wife, the former Caroline Clarke.  His grandfather, John Bloomingdale Taylor, had been the manager of John Jacob Astor's estate.  Born in 1845, The Yonkers Statesman said he "spent his early boyhood in New York City and Newport, and his early manhood in traveling around the world."  He lived on significant inherited wealth.  "He never engaged in business," said The Yonkers Statesman following Taylor's death in his apartment on March 24, 1911. 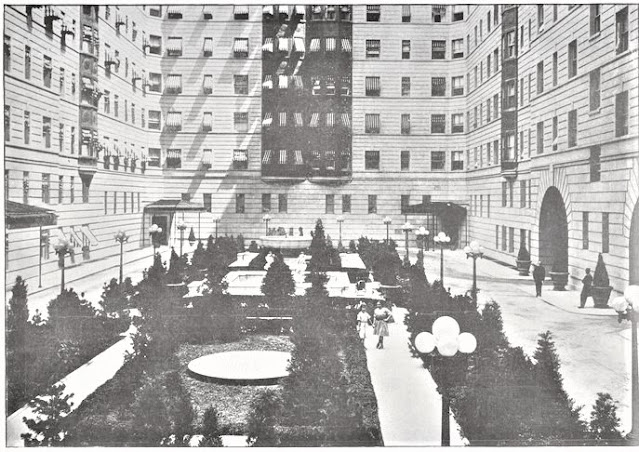 The courtyard featured a fountain and manicured gardens.  from The World's New York Apartment House Album, 1909 (copyright expired)
Another early resident was playwright and lyricist Henry Martyn Blossom.  He primarily worked with Victor Herbert, although he also collaborated with composers like Raymond Hitchcock and A. Baldwin Sloane, and wrote the lyrics for Montgomery and Stone's successful The Slim Princess.
The early 1920's saw two theater owners in The Belnord.  Joseph "Joe" Leblang was a part owner of the George M. Cohan Theatre, the Sheridan Theatre, and the Broad Street Theatre in Newark.
Simultaneously, Walter Reade and his wife, the former Gertrude Blumberg, had an apartment.  Known as the "showman of The Shore," Reade owned six motion picture theaters in Asbury Park.  His chain of theaters would eventually swell to 40.
A somewhat colorful tenant was Lillian N. Duke.  She had married tobacco magnate James Buchanan Duke in 1904, but he quickly divorced her over infidelity.  She received a $500,000 settlement, more than $15 million in today's money.  But her finances were seriously impacted when she trusted an unscrupulous broker, Alfred E. Lindsay.  On March 2, 1922 The Morning Telegraph reported that Lillian had charged him with "grand larceny in the first degree," saying he had "taken money ostensibly to invest."  She won the case and Lindsay was "sent to prison for swindling Mrs. Duke out of $325,000 in cash and $50,000 in jewelry," said The New York Times.
It was a Pyrrhic victory.  Lindsay had lost his freedom but Lillian had lost her fortune.  She soon left The Belnord and moved to West 88th Street, where she died on October 25, 1925.  In reporting her death, The New York Times mentioned, "Several days ago it was learned that she had been nearly destitute for months."
By the 1930's, grand Victorian apartment buildings had generally fallen from favor as wealthy New Yorkers moved to modern Art Deco style buildings.  But The Belnord held its own.  An advertisement in The New York Sun on June 17, 1930 boasted, "Everybody who ever lived in The Belnord likes it, and nearly everybody who ever lived there is still living there now!" 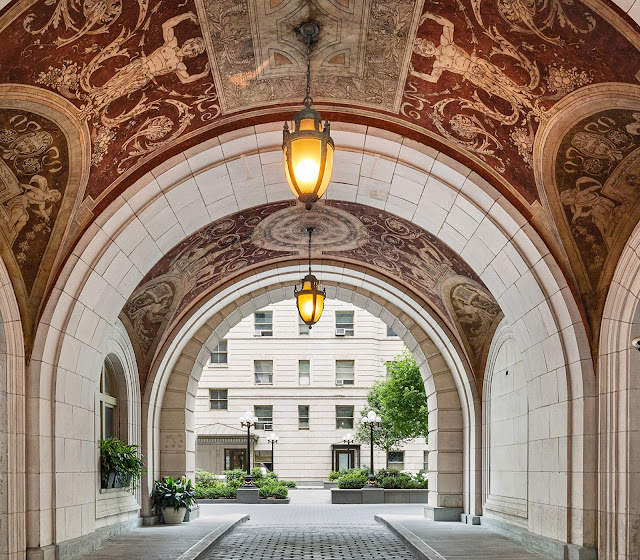 A view from 86th Street through the opulent carriage entrance into the courtyard.  photo via thebelnord.com
But the third quarter of the century did see remarkable change.  On November 16, 1980 The New York Times began an article saying, "At the Belnord, the wages of battle is more battle.  And more battle.  And more battle."  The disputes between the tenants and the landlord had started nearly a decade earlier.  The article said, "the splendor that was the Belnord's is mostly gone.  Although Isaac Bashevis Singer and scores of other success stories live there now, much of the grace has been chased by the shrill battles pitting many of the 225 current residents against the owner, Lillian Seril."
Amy Munetz recalled that when she moved into the building in August 1940, "the staff used to include full-time carpenters, electricians and laundry room attendants."  Now, she said, "we are down to about a dozen people for this huge place."
Although the exterior of the building had been given landmark designation in June 1966, inside was another story.  "The roof, the elevators and the electrical and plumbing systems are said to need major repairs.  Chunks of ceiling in some apartments have collapsed and other apartments have leaks.  The platform holding the garden is cracking, shifting and leaking and stalactites have formed in the basement," said the article.
The hostility between the tenants and landlord raged on for another 14 years.  Then, on October 29, 1994 The New York Times journalist Shawn G. Kennedy reported, "Twenty years after angry tenants went to war with the owner of one of the Upper West Side's grandest apartment buildings, a peace settlement was reached yesterday, ending one of the longest rent strikes in New York City's history."
Lillian Seril had thrown in the towel, selling The Belnord to Property Markets Group.  "The new owners...have agreed to spend $5 million on new plumbing and electrical systems, a new security system and more staff members," said the article.  The owners inherited "hundreds of building code violations and state-imposed penalties."
Interestingly, one of the tenants was Lillian Seril.  She died in her 3,000-square-foot, $450 per month rent-controlled apartment at the age of 95 on June 24, 2004.  In reporting her death, The New York Times mentioned that The Belnord had been "a center of the Upper West Side's intellectual life, home over the years to figures like the Nobel Prize-winning author Isaac Bashevis Singer, the Actors Studio founder Lee Strasberg and the actor Zero Mostel."  Other well-known residents include actors Matt Damon and Walter Matthau. 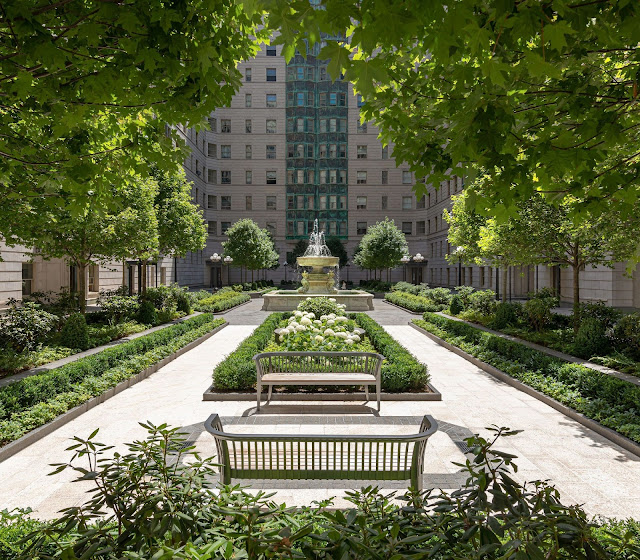 photo via thebelnord.com
The much-improved Belnord was sold in 2015 to HFZ Capital Group, which announced plans to convert the building to condominiums.  Architect Robert A. M. Stern was commissioned to remodel the apartments.  And while carriages and touring cars no longer pass in and out of the majestic iron gates, the dignity of the grand apartment building has been recaptured.  (Currently the Belnord is the set of the Hulu series "Only Murders in the Building.")
no permission to reuse the content of this blog has been granted to LaptrinhX.com
Posted by Tom Miller at 1:27 AM