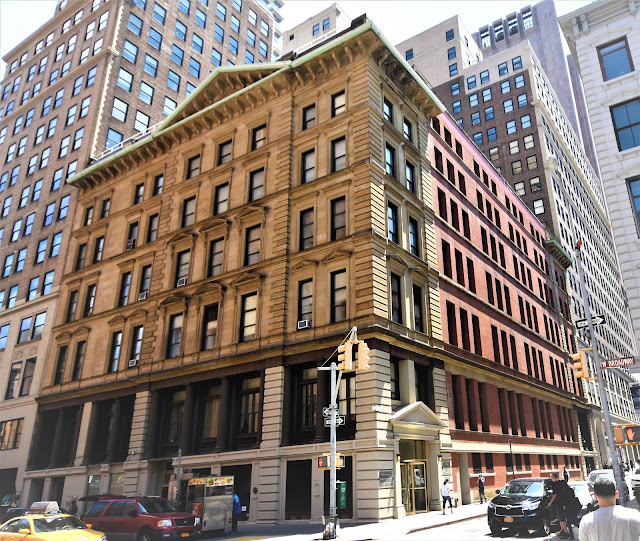 Horace Brigham Claflin was born in Milford, Massachusetts on December 18, 1811.   While still a youngster he worked as a clerk in the general store of his father, John Claflin.  Following their father's death in 1831, Horace and his brothers bought out the business.  Within a decade what had been a country store was one of the largest businesses in New England.  Claflin sold his portion to his brothers in 1843, coming to New York with a fortune of $30,000.

He formed a wholesale dry goods business with William F. Bulkley.  When Bulkley retired in 1851, Claflin joined with Williiam H. Mellen to form Claflin, Mellen & Co.  Ten years later their business was so successful that the men hired architect Samuel A. Warner to design a massive wholesale store to engulf the entire block front on Worth Street, between West Broadway and Church Street.

Faced in Nova Scotia sandstone and rising seven stories, the Italianate style structure was palatial.  Renaissance-inspired pediments, quoins and immense balustrades on the West Broadway and Church Street ends resulted in a dignified commercial structure.  The History of New York City, in 1868, described it as "built in a tasteful style of architecture, and at first sight presents the appearance of some colossal public institution, as which, in one sense, it may be properly regarded."


The building encompassed 48,000 square feet and employed a sales force of 700 which swelled to about 1,000 in the busiest seasons.  William Leete Stone in his History of New York City remarked "Nor can any one walk through this great New York warehouse--the largest in the United States--without being impressed with the idea of its high mercantile importance."

Despite the problems caused by the Civil War (half of the firm's business was in the "slave-holding states" and Claflin's vocal opposition to slavery was unpopular in the South), profits continued.  Sales reached an unimaginable $72 million during one of the war years.

In January 1864 Mellen retired, and the firm was renamed H. B. Claflin & Co.   The Panic of 1873 severely impacted the business, pushing it to the brink of bankruptcy.  But Claflin persevered, offering goods at tremendous discounts in order to raise the cash to pay creditors.


In 1875 he was accused by the Government of "conniving at a gigantic system of smuggling."  The U. S. Government sued to recover $1.5 million on silk duties.   Claflin worked as his own private detective and exposed the true crooks.

Obviously, Horace Claflin amassed a massive personal fortune.  The New-York Tribune reported that "For many years [his firm] was the largest house of its kind in the world, with yearly sales approximating $100,000,000."  But the millionaire was acutely aware of the needs of the less fortunate.

The National Cyclopaedia of American Biography, in 1893, recalled "Thousands of deserving young men with slender means owe their start in life to the view he took--that character is a safer basis for credit than capital...Mr. Claflin's benevolence was without limit.  He frequently said to his sons: 'We must try to give pleasure to poor people, not to the rich; they do not need our attention.'"


H. B. Claflin & Co. was routinely the victim of thefts.  But one stood out.  In 1874 a young man named George H. Mix applied for a position as clerk.  He brought with him letters of introduction from various well-known citizens and was hired in the lace department.

Unknown to H. B. Claflin & Co. Mix had a criminal past.  The New York Times wrote "Mix's history is a singular one."  He came from one of the most prominent families in Connecticut.  When his father, a Hartford banker, died around 1869, he left his son funded stocks which provided him an annual income of $1,500--about $27,000 today.


The young man almost immediately came to New York City, and was quickly arrested for "swindling the Gilsey House [hotel]."  The Times explained "his mother, by means of her wealth, saved him from State Prison."   He has later arrested for stealing from the Broadway firm of McDonnell Brothers.  Once again, he escaped prosecution.

The letters of recommendation he presented to H. B. Claflin & Co. were all forgeries.   When $1,000 worth of laces were missing in October 1874, shortly after Mix's hiring, a private detective was put on the case.  Mix was arrested in the St. James Hotel.

The Times reported on October 16, "On being arraigned in court yesterday he made a clean breast of the affair, and resorted to his old tactics.  He first endeavored to bribe Detective Mooney, then he wanted to fix the reporters, and finally informed Chief Clerk Cooney that he would make it all right with him."

For the first time in his criminal career, Mix could not buy his way out of his crimes.  He was held in default of $3,000 bail for trial.

Horace B. Claflin died in November 1885.  His will directed that the bulk of his estate should remain in the business for five years.  Therefore, in May 1890 the old business was reorganized as the H. B. Claflin Company with Horace's son, John, as its president.  He held 50 percent of the stock.

That same month Susan R. Lawton sold the old buildings abutting H. B. Claflin Company at the corner of West Broadway and stretching to No. 73 Thomas Street.  The sale price was $25,000, just under $675,000 today.

John Claflin brought back Samuel A. Warner to extend the building, nearly doubling its size.  In a remarkable early example of contextual architecture, Warner disregarded current trends and matched his original design.  Completed in 1891, the seamless addition created a perfectly-balanced structure.

By the first years of the 20th century the dry goods district had moved away from the Tribeca neighborhood.   H. B. Claflin's monstrous building now sat squarely within the shoe district.  Nevertheless, on June 21, 1912 vice-president John C. Emmes told members of Wholesale Dry Goods Centre Association "I want to say now that the H. B. Claflin Co. has no idea of moving; neither do we even expect to move any of our departments uptown."

Management may have regretted its stubbornness.  Two years later newspapers and trade journals nationwide printed full-page announcements of shocking failure of H. B. Claflin Company.  The Upholsterer captured the industry's disbelief saying "The business world throughout the country was tremendously moved when under date of June 25 the newspapers spread broadcast the fact that the H. B. Claflin Co. had gone into the hands of receivers."

Once again the firm reorganized and managed to stay afloat until 1926.  Then, on October 2 that year, The New York Times reported "Claflins, Inc. rated as the second largest wholesale dry goods establishment in this country and a concern that is more than eighty years old, is to go out of business." The article noted "It has between 800 and 900 employes, many of whom have spent their entire business life in the great building at Worth and Church Streets."

Immediately upon the closing of Claflins, Inc. the building's new owner, the Merchants Square Corporation, had the original 1861 building demolished.  The architectural firm of Jardine, Hill & Murdock, which was designing its 16-story replacement, was also given the commission to renovate the former Claflin addition.  Included was a new entrance, now opening onto Thomas Street.  It featured a triangular pediment in keeping with the original Italianate design.

The Endicott-Johnson Corporation had been a major shoe manufacturer since the turn of the century.  Its factories were located upstate in Binghamton, Johnson City and Endicott, New York.   By 1927, when it moved into Nos. 151-157 West Broadway, it was employing a total staff of 20,000.

The immense size of the concern was evidenced six years earlier when the United States Department of the Interior gave Endicott-Johnson Corporation the contract to supply shoes to the Indian reservations.  The New York Times reported "This includes shoes for men, women and children on all reservations and approximated 40,000 pairs."

Endicott-Johnson Corporation's lease with the Merchants Square Corporation was initially 15 years, with a yearly rent of $54,000; about $737,000 today.  Like Horace B. Claflin, the firm was known for its benevolence.  In addition to providing profit sharing to its employees and yearly bonuses for even the most menial of workers, the firm was widely-known for its philanthropies.

The year that the company moved into the West Broadway building, for instance, the Associated Press reported "George F. Johnson, President of the Endicott-Johnson Corporation, and members of his family will distribute 13,000 pairs of shoes to school children, teachers, policemen, firemen, railroad switchmen in the yards of the Endicott and Johnson City [railroads], inmates of country institutions and others as Christmas gifts.  The total expense of the gifts will be more than $50,000."

The shoe company would remain in the building until mid-century.  Afterwards various, smaller firms came and went--including Coleport Fabrics and the American Bleached Goods Co.--until 1986 when the New York County division of the State Supreme Court renovated the interior and took over the building. 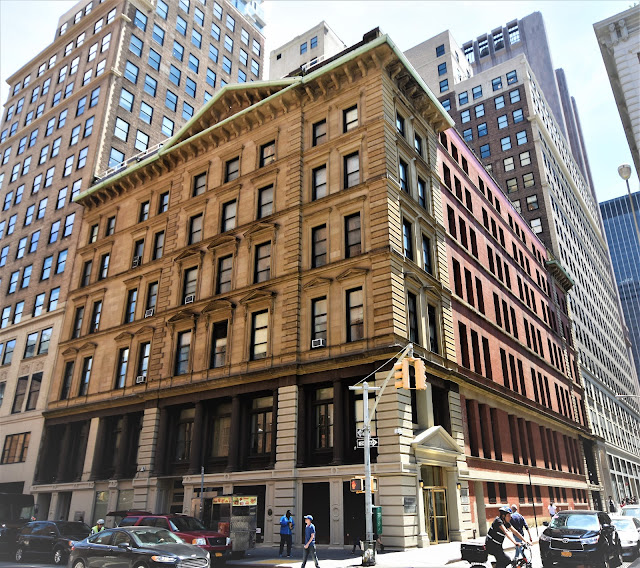 At less than half of its former self, the H. B. Claflin & Co. building is still a dignified and impressive presence on West Broadway; a fitting reminder of the days when it housed the largest wholesale dry goods firm in the world.