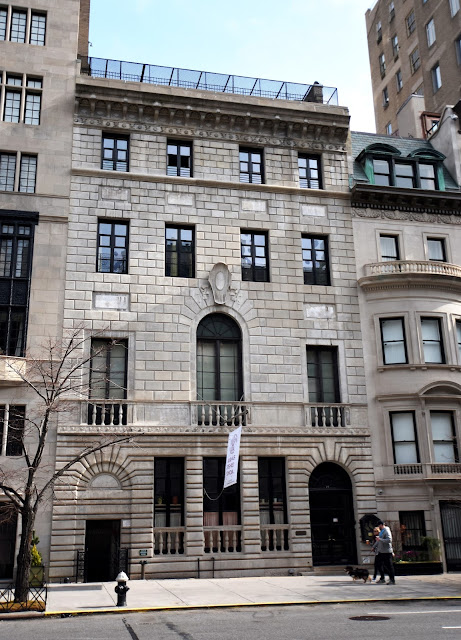 By 1916 Thomas Newbold had retired from politics and public service, and now dabbled in real estate.  In the 1880s and ‘90s he had served as the head of the New York State Department of Health and had also been a Democratic State Senator.  The son of Thomas and Mary Rhinelander Newbold, he was married to the former Sarah Lawrence Coolidge of Boston.  Sarah’s father, Thomas Jefferson Coolidge had been Ambassador to France.

On February 3, 1916 The New York Times reported “Thomas Newbold states that the reported foreclosure by him of 13 and 15 East Seventy-ninth Street, has not been closed.”  The two narrow brownstones had been built in the 1870s and Newbold had a personal interest in foreclosing on the properties.

The following week the Real Estate Record & Builders’ Guide announced that McKim, Mead & White would soon start plans “for a handsome residence” to replace the architecturally out-of-date houses.  The journal noted “The cost is expected to exceed $100,000.”

Before construction got underway, Thomas and Sarah Newbold prepared for a socially-important wedding.  The couple had three children.  Their daughter, Julia Appleton Newbold had married William Redmond Cross on Saturday, April 19, 1913; and the following year son Thomas Jefferson Newbold was married to Katherine Hubbard.  Now Mary was to marry into one of Manhattan’s most prominent families.

William Gerald Dare Morgan was descended from the Livingston and Hoyt families and could claim two signers of the Declaration of Independence as ancestors.  Known as Gerald, he had been a war correspondent, returning to his family’s home at No. 26 Washington Square North shortly before the Newbolds announced his engagement to Mary in March 1916.  They were married on Saturday June 3 in Hyde Park where the Newbolds maintained their summer estate

On the day of Mary’s wedding the Record & Guide mentioned that construction on the Newbold mansion would require 170 tons of steel.  McKim, Mead & White had designed an Italian Renaissance palazzo fit for a doge.  Three floors of rusticated limestone sat upon a base distinguished by deeply-defined bands of alternating widths.  The arched double-doored entrance, with its elegant fanlight, was balanced by a blind arch which contained the unobtrusive service door.  Unusual, delicate stone balustrades within the openings on this level were repeated at the second floor where dramatic French doors sat within an arch capped by a projecting carved shield.  Above it all was a robust stone cornice.

The 79th Street mansion was completed just in time for a war-time wedding.  Among the Newbolds’ Hyde Park neighbors was the family of Francis Peabody of Boston.  On February 3, 1918 The Sun reported that “one of the recent weddings hastened by the war” was that of Sylvia Peabody, to Captain Clarence Van Schaick Mitchell of the United States Cavalry.

The small but fashionable wedding (best man was Charles Scribner, Jr. and the two ushers were Lt. Winthrop Pyemore of the British Army and Irving B. Kingsland) took place in Grace Church.  To accommodate their Hyde Park neighbors, Sarah and Thomas Newbold hosted the wedding breakfast in their new mansion.

Sarah Lawrence Newbold died in the house on December 29, 1922 at the age of 65.  Thomas remained in the mansion, surrounded by his servants, until his death on November 21, 1929, aged 81.  His $3 million estate was divided equally among his three children.

Mary and Gerald Morgan moved into the 79th Street house and took possession of the Hyde Park estate.  There they became intimate friends with their neighbors Franklin and Eleanor Roosevelt.  Newspaper reports of Roosevelt automobile outings, entertainments and similar activities very often included Mary and Gerald Morgan.  On at least one occasion the Morgans were overnight guests at the White House.

On March 1, 1940 Mary’s sister Julia and her husband announced the engagement of their daughter Emily Redmond Cross to John Kenyon Vaughan-Morgan, son of the late Sir Kenyon Vaughan-Morgan and the late Lady Vaughan-Morgan of London.  Sir Kenyon had been a Member of Parliament.  The reception would be somewhat nostalgic.  The New York Times reported it would take place “in the former home…of the prospective bride’s maternal grandparents, the late Mr. and Mrs. Thomas Newbold.”

The socially-important event would be among the last in the grand home.  On September 7, 1944 The Times announced “The Rudolph [sic] Steiner School, an elementary school for boys and girls established here in 1929, has purchased the five-story dwelling at 15 East Seventy-ninth Street from the estate of Thomas Newbold.”

The school was based on the philosophies of Austrian writer and lecturer Rudolf Steiner, who died in 1925.  Nature walks in Central Park were to be expected, given Steiner’s emphasis on “a three-fold understanding of the human being as body, soul, and spirit.”  One of these resulted in a surprising and chilling episode in 1961.

On January 17 teacher Harry Kretz took his class of 16 third-graders for a “nature study walk.”  Among the group was eight-year old Jefferson Miller.  The following day The Times reported “Prowling in the park underbrush for birds and stuff, Jeff came upon a cardboard shoebox wrapped in paper and bearing the words ‘Merry Christmas.'  The exceptional thing about the package was a steady ticking coming from it.”

The suspicious and precocious boy opened the box and discovered two shotgun shells wired to a nine-volt radio battery and an alarm clock.  It was a bomb.

Without panicking, the eight-year old disconnected the wires, then called Harry Kretz who “said he had done exactly the right thing.”   The teacher then took the bomb and the class back to the school where detectives were called.  The newspaper said the detectives “praised Jeff for preventing an explosion.” 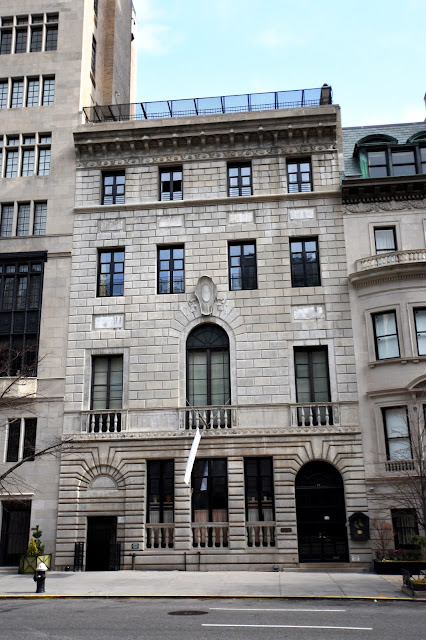 The Rudolf Steiner School still operates from the Newbold mansion.  Little other than the rooftop playground, visible from the street, suggests that the stately McKim, Mead & White structure is anything but a noble private home.