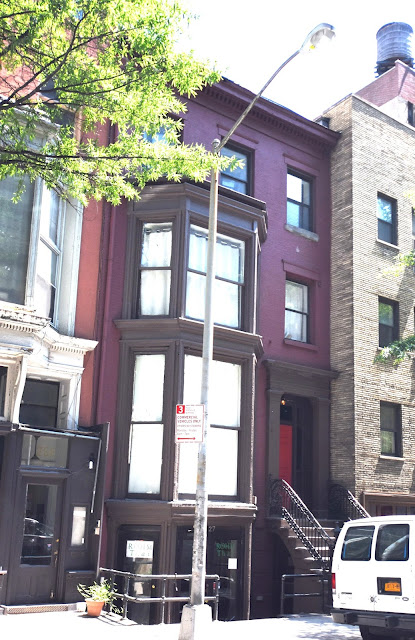 James Rowe’s real estate office was located at No. 117 East Broadway in the early 1840s.  While it appears he initially operated as an agent, by the middle of the decade he had branched into real estate development.

In 1831 Samuel B. Ruggles had begun transforming the swampy land which was part of James Duane’s Gramercy Farm into a fashionable square.  He laid out 60 residential plots surrounding the park.  Shortly after landscaping of the square was started in 1844 refined brick and brownstone mansions began rising around it.

The high-toned neighborhood spilled down the side streets.  In 1842 James Rowe had already begun construction of a Greek Revival home nearby at No. 25 East 20th Street; and two years later he started on a similar residence next door at No. 27.   Before the end of the decade the block, between Broadway and Park Avenue, would be lined with upscale homes.  Across the street six matching brownstones were completed in 1848, including the home of Robert Barnwell Roosevelt at No. 26 and that of his brother and sister-in-law, Theodore and Minnie Roosevelt at No. 28.

No. 27 was completed in 1846—a three-story Greek Revival home faced in red brick and trimmed in brownstone.  It sat above a rusticated brownstone English basement.  While the modest wooden cornice did not flaunt the affluence of the intended homeowner, the elaborate ironwork of the stoop did.  The intricate basket newels perched on stone drums were a welcomed hold-over from a generation earlier; while the heavy ornate railings anticipated the Italianate style.

By the mid 1850s No. 27 was home to Ridley Watts and his wife.   Treasurer of the American Geographical and Statistical Society, his office was at No. 78 South Street.   His involvement with the Society, which sent expeditions to unexplored lands, was very likely prompted by his father-in-law, Henry Grinnell.  The millionaire merchant had personally funded the 1850 Grinnell expedition to the arctic to find the lost Franklin Polar Expedition.

In 1855 it appears that Mrs. Watts and one of her servants mutually agreed to a separation.  On April 11 that year an advertisement appeared in The New York Herald:  “Wanted—By a respectable Protestant English girl, a situation as nurse or waiter; is a professed waiter; has good city reference.  Please call for two days at her present place, 27 East Twentieth street.”

As treasurer of the American Geographical and Statistical Society, Watts was responsible, among his other duties, for collection the donations necessary to launch the Society’s exotic expeditions.  In April 1856 it announced the intentions “to send out an expedition to explore the Western section of the broad central belt of the African continent.”  The New York Herald noted “The considerations which have induced them to take this step, are stated to be the remarkable success that has attended recent explorations on the continent of Africa.”   The Society make it clear that the expedition would not sail until the $8,000 cost was raised; and that subscriptions should be sent to Ridley Watts.

When Civil War erupted in the South, Mrs. Watts focused her attention on helping the cause.  On May 28 1861 Colonel Frederick George D’Utassy announced the formation of the Garibaldi Guard, “composed of foreigners, a very large proportion of whom have seen service.”  He announced through The New York Times, “We invite contributions of money [and] donations of clothing and materials.”  The article noted “Ladies willing to lend their aid in making up clothing, &c., will learn how their assistance may be made most effective, by applying to Mrs. Ridley Watts.”

The plea was successful and by June 3 the following week $1,191 in cash had been donated.  The Times reported as well “Large quantities of materials for underclothes have been purchased at wholesale, and cut out gratuitously by Union Adams.  These are being made up by ladies and by church societies, or given out to poor and deserving needle-women.”  Nevertheless, further assistance was necessary, “especially from those having sewing machines.”  The article directed women to “apply” at the Watts house on East 20th Street.

Mrs. Watts turned her attention briefly away from war work when another crisis arose later that year.  On December 4 an advertisement appeared in The New York Herald offering a $3 reward.  “Lost, on Saturday afternoon, November 30, a Scotch Terrier.  The above will be paid on its return to 27 East Twentieth street.”   The reward Mrs. Watts offered for her lost pet would amount to about $75 in 2016.

By the last years of the decade Watts and his wife had left 20th Street.  No. 27 was apparently now owned by dentist M. Levett, who leased space to a Dr. Rowe.  Rowe touted his exclusive cure for catarrh through staged patient testimonials.

In December 1867 the Evening Mail received a letter from Mrs. L. J. Curtis of Norwalk, Connecticut.  The newspaper said she gave her “grateful thanks and thorough appreciation of his skill in curing her of catarrh, from the effects of which, previous to consulting him, she had been a martyr, or, as she expresses it, ‘had suffered so much and so long from.’”

The following month, The New York Times printed what seemed to be a letter to the editor.  But the newspaper was careful to print “Advertisement” below the signature of Mme. Westcott “the celebrated milliner of No. 771 Broadway.”  Madame Westcott said that previous to placing herself “under the care of Dr. Rowe…it was not only with great difficulty that I could swallow, but it also affected my ear, causing me many sleepless nights and much excruciating pain.  Under Dr. Rowe’s treatment I was entirely cured.”

Only a month later, in February 1868, Rowe was gone.  Dr. M. Levett placed an ad in The New York Herald that month offering “To Let—part of a house, consisting of parlor floor, basement and kitchen and four rooms on this story, in a first class situation, to a small family without children; parlor floor can be let separately if desired.”

Later that year, in December, Dr. Levett advertised his latest invention in the Evening Express.  “The Suction Cellular Plate, with a Reticulated Goldweb Base, for artificial teeth, is the perfection of dentistry.  The plate is light, elastic, extremely adhesive, strong and durable.”  Patients were directed to 27 East 20th Street, “fifth house from Broadway.”

Levett moved out of the house the following spring.  The changing neighborhood was evidenced by an advertisement in The New York Herald on May 13, 1869: “To Let—Three story high stoop, No 27 East Twentieth street…containing 14 rooms, for dwelling or business purposes.”

Another doctor, J. Burnap Dorsey, made No. 27 his home and office.  He died here on Sunday, March 14, 1875 and his funeral was held in the house three days later.

When James Muir purchased the once-elegant home businesses had overtaken the block.  In 1885 he transformed the façade by installing a three-story commercial bay.  Muir was the principal in the plumbing contracting firm of James Muir, Sons & Co.    A major player in Manhattan construction, the firm handled substantial jobs.  In June 1890, for instance, Carpentry and Building reported on the construction of the 13-floor Tower Building on lower Broadway.  “The plumbing through is done in the very best manner by the well-known firm of sanitary plumbers, James Muir, Sons & Co.”

Muir leased out other space in the building.  In 1891 Mme. Bruce, a fashionable dress maker, was here.  And in April 1895 when architects George A. Freeman and Frank E. Wallis partnered to form Freeman & Wallis, they opened their new office in the building.  The Engineering Record reported on the architects’ wide-flung aspirations.  “The firm will give special attention to alterations and remodeling, interior decorations, designs for furniture, leaded glass, wrought-iron work, mausoleums, etc.”

In 1897 the architects hired a new bookkeeper, 30-year old Arthur Harris.  A bachelor, Harris was interested in motorcars and was a member of the New-York Road Drivers’ Association.  Unfortunately, he was also interested in liquor and betting.

Around March 1900 Harris forged his first check using George A. Freeman’s name.  Having gotten away with it, he did it again.  And again.  By the time his forgeries were discovered three months later, Freeman estimated the total amount at between $4,000 and $5,000.

The New-York Tribune reported “Horses, the Speedway and drinking are what Arthur Harris…blames for forgeries.”  The newspaper described his appearance in court as “thirty-three years old, tall, with a small mustache and wearing neat clothing.”  Magistrate Deuel held him on $2,500 bail awaiting trial.

In 1902 Francis G. Dietz company had its offices and showroom in the building.  The manufacturer produced the Rex Garment Supporter “for shirt waist, skirt and belt of hygienic value for athletic and dressy occasions.”

Another tenant was the Jay C. Wemple Company, manufacturers of window shades.  The firm’s secretary was Alonzo E. Wemple who met an unexpected death after leaving work on May 17, 1904.

The Evening World’s report of his demise was somewhat surprisingly worded.  “Alonzo E. Wemple…lies dead at his home, he having expired suddenly while music played and diners in Shanley’s, at Forty-second street, made gay.

“Mr. Wemple was in the restaurant last evening.  The music was playing and about him everywhere was life as it is known on Broadway.”

Wemple summoned the waiter and asked for a glass of water.  “I feel ill,” he said.

Before the waiter could return with the water, “Mr. Wemple sank in his chair.  Death came quickly.  He was removed to his home.  ‘Heart disease,’ the doctors said.”

James Muir & Sons Co. was still in the building in 1917 when it received the contract for the plumbing work for Robert L. Livingston’s $60,000 mansion on East 96th Street.  But it moved out in 1921 when Muir leased the store to the bicycle firm Colson Company.

The following year James Muir, Jr. sold both No. 25 and 27 East 20th Street to Isabelle K. Pentland.  The houses continued to house small businesses until August 1950 when the Tel Aviv Synagogue purchased both structures through Herman Carman.

No. 27 was converted to a shul, known both as the Tel Aviv Synagogue and “The Little Synagogue.”  In 1961 Rabbi Armin Carman died at the age of 72; and three years later the estate of Herman Carman sold the buildings to investor Charles A. Kenney.  Nevertheless, the synagogue continued operating here. 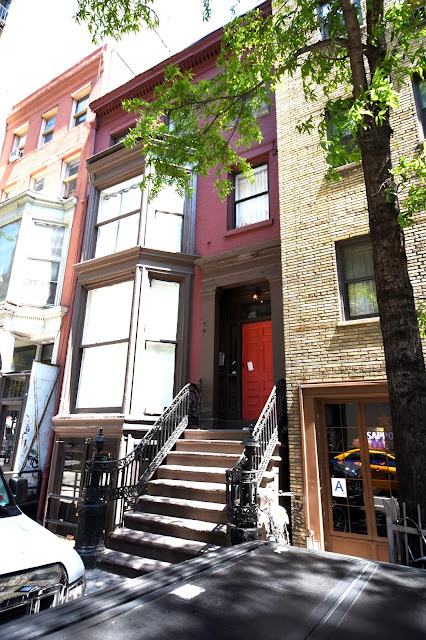 For decades it offered children’s entertainments like plays, puppet shows and “Mother Goose Tales.”  The Little Synagogue remained in the building nearly to the end of the 20th century.  Today the house where a wealthy socialite took donations to aid the Union Army shows the effects of years of neglect.  Yet the extraordinary stoop ironwork testifies to the opulent lifestyles of its owners 170 years ago.
Posted by Tom Miller at 2:35 AM