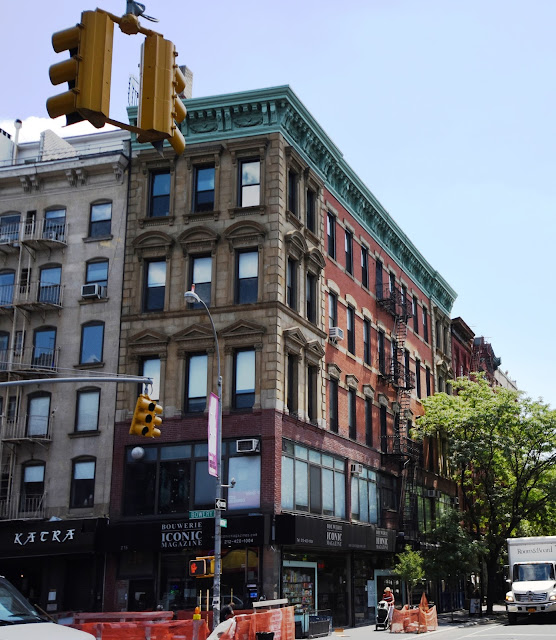 As early as 1837 John Odell, “tavern keeper,” operated from the ground floor of the small hotel on the corner of the Bowery and Rivington Street. The tavern and hotel, under various owners and managers, endured as the Bowery neighborhood changed into the center of the German community by the 1850s.

The Germans established their own churches, newspapers, social clubs and businesses.  The New Amsterdam Savings Bank was organized in 1869 to serve the German-speaking community.   The names of bank’s officers reflected the personality of the neighborhood: Theobald Frohwein was President, John Riegelmann Vice President, John Guth was Treasurer and Jacob Rosenhain Secretary.

Within only two years the bank was successful enough to plan its own headquarters.  The old hotel property at No. 215 Bowery was obtained and on July 27, 1872 the Real Estate Record and Guide reported German-born architect Charles Kinkel had filed plans for a “four-story Ohio stone, first-class store” for the New Amsterdam Savings Bank.  Another German immigrant, Joseph Schaeffler, received the contract to construct the building.

The completed structure was, in fact, five stories.  Kinkel faced the Bowery elevation with stone, which wrapped around the Rivington Street side for two bays before giving way to red brick. The stone-faced Renaissance Revival design appeared again in the eastern-most two bays.  Kinkel’s dignified design included Renaissance-inspired pediments within the stone portion; and trendier lintels with incised designs of the Eastlake Movement on the Rivington Street side.  An especially attractive pressed metal cornice crowned it all. 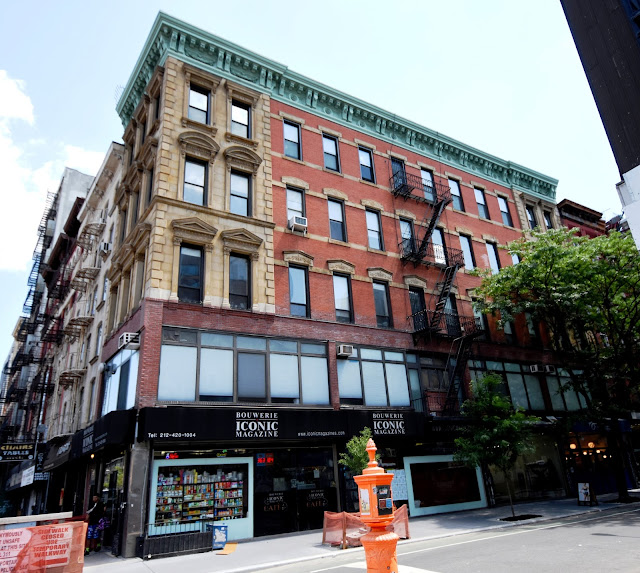 The New Amsterdam Savings Bank’s construction project could not have come at a worse time.  A year earlier the German Empire stopped minting silver coins; a decision that lowered the value of silver, much of which was mined in the United States.  A chain of domino-effect events resulted in the Financial Panic of 1873, one of the worst and longest-lasting financial depressions in U.S. history.

On September 23, 1873 The New York Herald tried to calm readers, many of whom were already participating in runs on banks.  A headline read “RELIEF.  Calm and Order Returning to Wall Street.”  The article reported on the condition of every Manhattan bank, and included “The New Amsterdam Bank, Bowery and Rivington street, went on as usual, without any particular draw upon the deposits or especial lodgments by customers.  The officers were ready for an emergency had it arisen”

While the bank struggled on, helped by the unusual patience and trust of its depositors, the upper floors of No. 215 Bowery were leased as offices and lodge rooms.  In July 1874 the Arcturus Lodge, No. 274 of the Freemasons moved in.   Other tenants were Solomon Hertz, insurance agent; attorney Francis H. Rodenburg; and oddly enough, Charles A. Milner “artist.”  Unlike the other tenants who lived nearby (Hertz lived on East 4th, and Rodenburg on Ludlow Street) Millner’s home was far uptown, at No. 550 East 82nd Street.

While depositors clung to their faith in the bank, the New Amsterdam Savings Bank was faltering.  On September 30, 1876 The New York Herald noted “To the casual observer the New Amsterdam Savings Bank, at No. 215 Bowery, wore its wonted appearance yesterday.  When the information that an injunction to suspend business had been served on the bank it was expected that a ‘run’ would be the result.  Nothing of the kind occurred, however, and yesterday the vicinity of the bank was as quiet as usual.”

Instead, the cashier, Mr. Weber, told a reporter that “the depositors had perfect confidence in the announcement made by the President that the bank was capable of paying 100 cents on the dollar, and that the injunction and receiver had been applied for in the best interests of the depositors.”

The bank remained open until 3:00 that afternoon, as always.  But it never reopened.

As The Germania Bank set up operations in the new space, the upper floors continued to be leased to businesses and lodges.  In 1879 the Free and Accepted Masons of the State of New York published a list of “Lodges working in the German Tongue.”  Among them were the Germania Lodge and the Goethe Lodge at No. 215 Bowery.   By 1887 two lodges of the Odd Fellows were listed here—the Knickerbocker Lodge and the Empire Lodge.

In 1886 German-born architect William Graul had his offices in the building.  He was still here when he partnered with William C. Frohne in 1892 to form Graul & Frohne.

By now the Financial Panic had passed and The Germania Bank was performing well.  In 1888 Illustrated New York: The Metropolis of To-Day reported the bank's cash capital at $200,000, with a surplus of more than $300,000; “a fact that proves the soundness of its present condition.”

Along the Rivington Street side, behind the banking rooms, were stores.  In 1891 Morris Marks ran his hardware store in one of them.  In October that year the bank advertised vacancies in other ground floor spaces:  “Stores with Two Rooms—Suitable for any business; plate glass fronts; cheap rent.”

Although the Bowery was declining in the last decade of the 19th century, No. 215 continued to house respectable tenants.  Henry C. Botty’s law offices were here in 1895 when the New-York Tribune described him saying he “was born December 27, 1854 of German parentage...He perfected his law studies at Columbia Law School, being graduated in May 1875, and was admitted to the bar in January, 1876, soon after becoming of age.  Mr. Botty has ever since been engaged in the general practice of the law and has a large clientage, especially on the East Side and among the Germans.”  Henry Botty was appointed a judge of the City Court by Governor Morton on July 30, 1895.

In February 1898 ground was broken for the Germania Bank’s new $200,000 headquarters at Bowery and Spring Street.  Later that year, as the new building was being constructed, President Edward C. Schaefer commented on the changing Bowery and his continued confidence in it.

On December 28 The New York Times reported “He remarked that there was a much greater volume of banking business done in the Bowery than many people imagined, and that thoroughfare was not altogether given up to dime museums and beer saloons and cheap dance halls.  There were a good many manufacturers, and also large business houses there.”

What Schaefer did not mention was the change in demographics of the Bowery.  A druggist across the street from No 215 Bowery commented in January 1907, “First it was American, then Irish, then German, and now it is Jewish.”

The change was reflected in the tenants list in the former Germania Bank building and by 1915 the influx of Italians was also visible.  That year Gutman &Co., tailors, was here, operated by Samuel Gutman, Abraham Lipshitz, Isidore Gutman, Louis Rosen, and David Wisch.  Another tailor shop was Gambino & Realmuto, owned by Guiseppe Gambino and Frank Realmuto.  And Robert D. Costello operated his New York Barber College here that same year.  The barber school would remain at the address at least through 1919.

In 1937, during the last years of the Great Depression, Manufacturers Trust Corporation opened a branch in the building.  At the time the Bowery was suffering its darkest years, earning it the nickname Skid Row.

Improvement finally, and slowly, came in the last quarter of the century when the area became the Restaurant Supply District.  In 1977 artist Todd Stone had his studio and showroom in the building.  And in 1985 a conversion resulted in just two massive apartments per floor (a decade later the second floor apartments were united as a single residential unit). 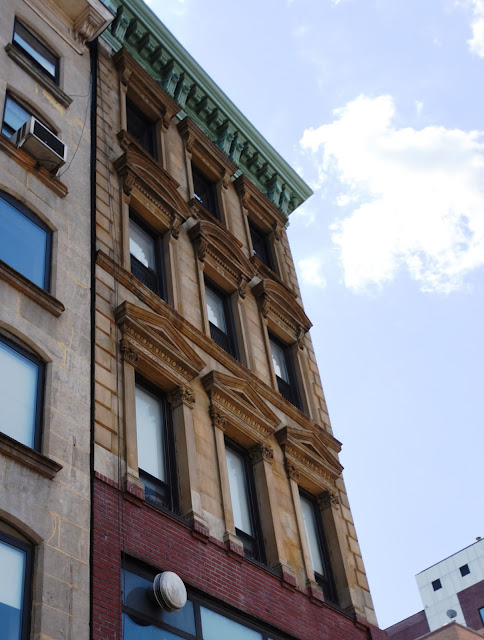 Although the lower two floors have been altered beyond recognition, Charles Kinkel’s handsome bank and office building survives beautifully intact on the upper floors.