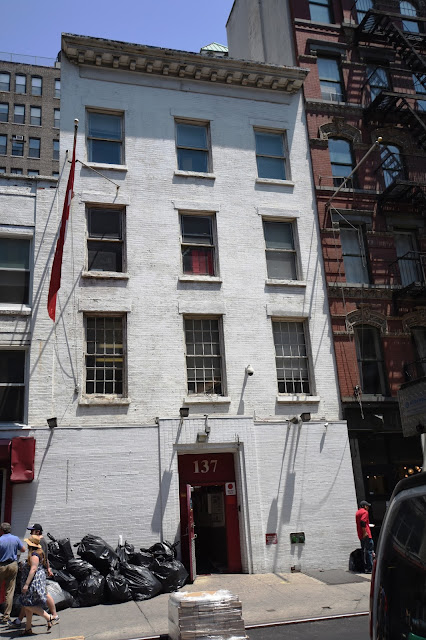 In the decade prior to the outbreak of Civil War the house at No. 137 West 24th Street was about two decades old.  The ample size of the residence—25-feet wide and four stories tall—spoke to the affluent status of its European owner.  Additional confirmation came when he decided to leave New York in 1858.  An auction announcement in The New York Herald on April 8 offered “all the elegant furniture contained in house 137 West Twenty-fourth street, the property of a gentleman returning to Europe.”

The items removed from the residence would have been similar to the high-end furnishings the auctioneer, M. Doughty, customarily sold: “city made mahogany and rosewood furniture, Brussels carpets, marble top centre, pier and sofa tables, mahogany tete-a tetes” and such.

The house became home to the Whitely family, who moved to the city from Paterson, New Jersey.  James and Ann had two daughters, Susanna and Elizabeth.   In the fall of 1862 the family looked for live-in household help, placing an advertisement seeking “A neat, tidy girl for general housework and washing and ironing in a very small family…a good place guaranteed to those who suit.”

Tragedy would soon come to the Whitley family however.   New York City had already suffered through disastrous epidemics, the most devastating being yellow fever and cholera.  The cholera epidemic of 1832 killed both the poor and the wealthy.  Another outbreak occurred in 1849 and resulted in 15,219 deaths.  In 1865 a third cholera epidemic began which would last through 1866.  It was possibly this deadly disease which decimated the Whitney household.

On Monday, May 1, 1865 Elizabeth died at the age of 21.  The New York Herald noted that “the funeral service will take place at the residence of the family” on Wednesday morning at 11:30.  Within the succeeding months Susanna would see both her mother and her father die.  And then, on the day after Christmas that year, the 16-year old died in the house as well.

The Whitley residence was soon operated as a boarding house.  Young Frank Morris lived here in 1867 while he studied at New York City College.   C. C. Brown was looking for work with another boarder the following year.  They jointly placed an ad in The New York Herald on April 5, 1868: “Two first rate carpenters want a job to repair or build a house, in or out of city, at $3 per day.”  The reasonable per-diem salary they wanted would equate to about $52 in 2016.

The second carpenter may have been boarder James E. Florance.   Two months later he sought a more supervisory position. “To Boss Carpenters—a situation wanted by a young man to finish his trade.”

The 24th Street neighborhood would suffer significant decline by the end of the century; but in 1870 the proprietor of No. 137 still catered to respectable boarders.  An advertisement in The New York Herald on April 28 offered the entire ground floor “to a small family, containing six rooms well ventilated, with gas. Rent $45.”

Among the residents here in 1873 was Professor Tailhefer.  In his rooms he gave private instruction to well-do-to students.  Although he offered tutoring in “literature, Latin, mathematics and natural sciences,” his specialty was French.  He promised to teach “conversation, reading and writing” in 40 lessons.

In 1874 the first floor was divided into two suites.  Potential boarders were promised the peace that comes with a child-free environment.  “Three rooms on first floor to let—in good order to adults; nice house and no children.  Rent $20.”  And while the house continued to be operated as a boarding house; in 1877 the first signs of commercial use appeared.  The third floor now housed an upscale dressmaker who advertised for “first class dressmakers” in April that year.

In May 1878 the ground floor, once rented as a unit to a family, was being offered to “gentlemen” as “nicely furnished” rooms.  The advertisements promised “rent low.”

Robert Clark lived in No. 137 West 24th Street in 1898.  He worked as a hat salesman in the Smith, Gray & Co., men’s furnishings store on Broadway and 31st Street (the firm advertised “Everything for him from hose to hat”).   That summer he waited on a customer who identified himself as Dr. Kennedy, a dentist on 22nd Street.  Clark's astonishing memory would play an important part in a murder investigation later.

On August 21 Dr. Kennedy was arrested for the murder of Emeline C. Reynolds after Clark issued a written statement to police.  It declared in part “He picked out a $2 dollar straw hat, but as it had a soiled spot on it I sold it to him for $1.50.  He also bought a brown plaid hat, paying $1 for it.”

Emeline Reynolds’s murderer was seen fleeing the scene wearing “a new straw hat,” as reported in The New York Times.  Despite the fact that tens of thousands of New York City men wore straw hats in the summer of 1898, the seemingly flimsy evidence let investigators to the dentist.

“The straw hat has not been found since the murder, thought the police say that they have evidence that the murderer wore a new straw hat.  Yesterday the ‘brown plaid hat,’ a bicycle cap, was found in the prisoner’s residence at New Dorp.  Clark identified the cap as the one that was sold to the purchaser of the straw hat,” reported The Times.

Although the plaid cap had nothing to do with the case and the straw hat was missing, the newspaper noted “A bicycle cap forms the latest link in the chain of testimony the police are winding around Dr. Kennedy.”  The article ended “Mrs. Kennedy is prostrated on account of her husband’s arrest.”

By the dawn of the 20th century the 24th Street neighborhood was quickly being engulfed by the “mercantile district.”  Old homes and small shops were razed to make way for tall loft buildings.   No. 137 survived when the nearly century-old structure was leased in 1909 by the new Dykes Lumber Co.

Owner Andrew H. Dykes converted the house to a “loft building,” as described by the Record & Guide a few years later.   Immediately successful, Dykes Lumber Co. opened a branch on West 44th Street in 1912.  By 1920 a third location was operating in Brooklyn.

When Andrew Dykes died in December 1944 his company had 11 lumber yards.  Dykes Lumber remained on 24th Street through until about 2014 when it was replaced by an electrical supply company.

Although the ground floor was obliterated more than a century ago, the upper stories of the building retain their residential appearance—the last remnant of a time when upscale homes lined this block of 24th Street.