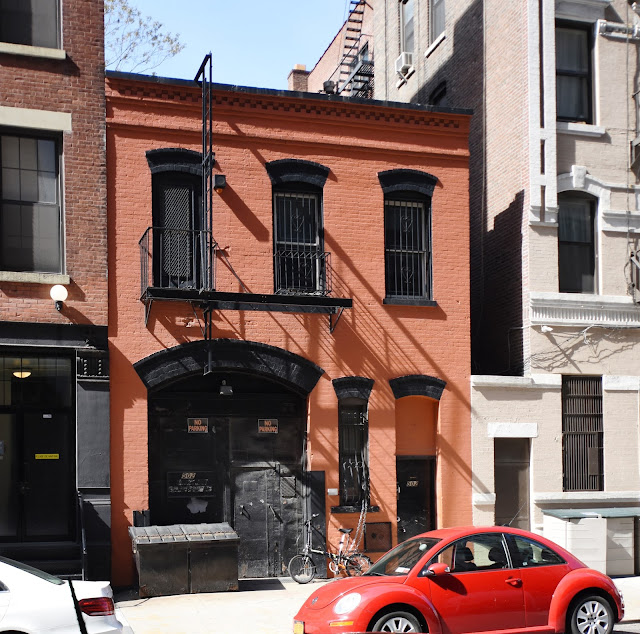 Shortly after the end of the Civil War the Yorkville neighborhood began filling with modest homes and small business buildings such as butcher shops and groceries.  Large commercial concerns along the river—slaughterhouses, breweries and cigar factories among them—lured immigrant workers.  Along with the other structures, private stables dotted the streetscape.

One of them, a two story brick carriage house at No. 502 East 74th Street, had been converted for commercial use by 1892.  The building was unexceptional in its design.  Its slight width required the architect to set its arched carriage entrance to the side, rather than centered as was often the case.   There was no attempt at expensive embellishments—the embellishments of the elliptical arched openings were executed in brick, rather than stone; as was the projecting bandcourse above the upper windows; and the cornice was creatively composed of bricks laid in a honey-comb pattern.

The former carriage house now housed a woodworking factory.  The firm installed the finished paneling and other interior architectural elements in structures under construction.  In April 1892 the well-organized and powerful United Wood Carvers’ Association had won an eight-hour workday.  But the owners of the 74th Street firm refused to budge.

The Annual Report of the Board of Mediation and Arbitration reported “Among the few manufacturers who refused to yield to the demands of the association, and insisted upon an increase in the hours of labor, was a firm whose factory is at 502 East Seventy-fourth street.”

The tense relationship between the workers and the firm dragged on into the summer of 1893.  The company had several large contracts on buildings being constructed; and the union saw its opportunity.  It ordered a strike and not only did the wood carvers and installers from No. 502 East 74th Street walk off the job, so did 400 other construction workers including house painters, plasterers, carpenters, paper hangers, varnishers, and fresco painters among others.

The union won.  The Annual Report noted “On August eighth the strike was declared off, after the firm had agreed to grant the eight-hour workday and to require the carvers then employed in the factory to join the union on or before August eleventh.”

But the wood working firm may have had the last word.  The demands of the union quite possibly put it out of business and within two months No. 502 was home to a different firm-- Jacobs & Marcus, makers of mineral water.

On May 6, 1894 the factory was the scene of a sensational arrest.  Nicholaus Riegel and his wife lived above his bakery at No. 1382 Avenue A.  Around 3:00 in the morning Mrs. Riegel awoke and realized there were three burglars prowling about in the dark.  When she screamed, the men ran; but her husband was quickly close on their trail.  Policemen McKnight and Palasco joined the chase and saw them duck into No. 502 East 74th Street.

When Officer Palasco entered the dark factory space, he was attacked by James Johnson.  But, according to The New York Times the following day, “Palasco took out his revolver and Johnson surrendered.  Palasco and McKnight then took the men to the station house.”

The burglars left behind their spoils.  Policemen later found “two suits of apparel, which Riegel identified as his Sunday suit, and his business clothes.  Nothing else had been stolen, but an attempt had been made to open the cash drawer in the store.”

Jacobs & Marcus joined the Soda Water Manufacturers’ Protective Association.  The “protection” provided by the organization drew the attention of the renowned Lexow Committee in 1894.  The New York State Senate probe sniffed out corruption within the police department.  It appears that the “dues” A. Jacobs and Solomon Marcus were required to pay simply kept their factory operating without problems.

The mineral water factory continued here for several years.  In 1898 it employed five male workers who worked an average of 60 hours each per week.  But in 1902 Jacobs & Marcus was forced to dissolve after filing a petition of bankruptcy.

The old carriage house now became the home of the Eastern Marble Company.  Incorporated in 1871, it focused on a utilitarian type of marble fixtures.  The Butchers’ Advocate noted on May 10, 1905, that “The marble work in Louis Stern’s new market at 2,251 Third Avenue is being done by the Eastern Marble Company, who operate steam marble works at 502 East Seventy-fourth Street.”  The publication pointed out “The company has for years been making a specialty of this class of work, having for its customers many of the leading butcher fixture manufacturers.”

In November 1908 hints of trouble for the Eastern Marble Company arose.  The New-York Tribune noted that the firm listed liabilities of $57,228; while its assets, including machinery, were just $23,906.  Within the year partners Josef Poksteff and Frank Steyskal declared bankruptcy.

At the time Glaser, Rohrer & Co. was doing business from its factory at Nos. 737-729 First Avenue.  But soon after Eastern Marble left East 74th Street, the drugstore fixture makers moved in.  Glaser, Rohrer & Co. not only manufactured individual cabinets and counters; but entire drugstore interiors.  On November 1912 The Druggists Circular noted that “R. W. Loveland...was so well pleased with an outfit of store fixtures made for him about a year ago by Glaser, Rohrer & Co. 502 East Seventy-fourth street, New York, that when he wanted to add to it a short time ago, he applied to the same concern to make the additions.”

The same edition of the journal pointed out that P. Cataldi had recently purchased a building in Orange, New Jersey and “it has been completely fitted with drug store furniture by Glaser, Rohrer, & Co.”

Druggists had a wide range of fixtures from which to choose when dealing with Glaser, Rohrer & Co.  In 1914 The American Druggist noted that “They have the fixtures complete as low as $350.  They can make them for you as high as $3,500.  But whether the fixtures ordered are the cheapest or the most expensive, one can rest assured that they will be well designed, well built, and made of good material.”  The range of prices quoted by the journal would equate to amounts from $8,500 to $85,000 in 2016.

Glaser, Rohrer & Co. was still in No. 502 East 74th Street when the American Druggist and Pharmaceutical Record warned druggists about out-of-date shopping environments.  “The old fashioned drug store, its fixtures, respectable albeit hoary with age, does not make an appeal to the purchasing desire of the modern public.  So if possible make everything bright and new and up to date.”

The magazine (no doubt with some financial coaxing from Glaser, Rohrer & Co.) advised “You will be surprised not only at how much better your goods look in the display wall cases that Glaser, Rohrer & Co… supply for the modern drug store, but at how much better they sell.”  The article added “Let them plan your installation according to the size of your pocketbook, and then give your competitor a run for his money.”

Despite its apparent success, Glaser, Rohrer & Co. was gone by 1920 when the Yorkville Marble Company was doing business from No. 502.  That year the company received unwanted publicity when it was named in an inquiry by U.S. Senator William M. Calder’s inquiry into a “Marble Trust.”  The Marble Industry Employers’ Association was deemed by the senator as, in fact, a conspiracy “of building material supply men and manufacturers and of members of organized labor.”  On December 11, 1920 the New-York Tribune reported that the principals of the Yorkville Marble Company had been indicted along with 27 other “stone men.”

Despite the ugly press, the company survived and remained in No. 502 through 1930.  The following year it was home to the Rand Furniture Manufacturing Company; and by 1942 had been taken over by the Yorkville Wood Products Associates. 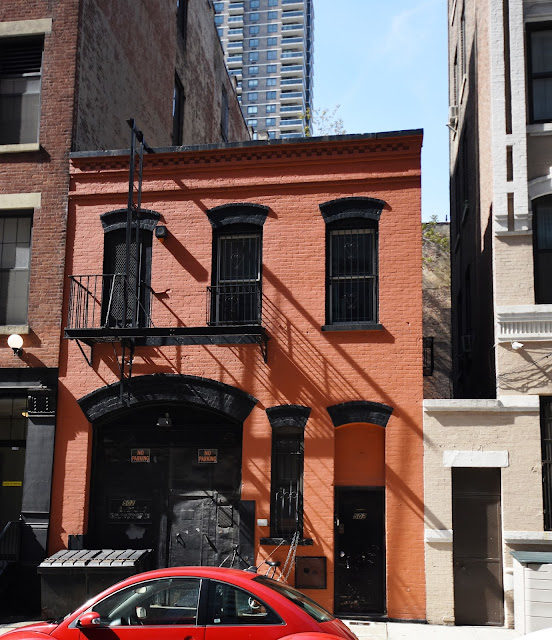 In the 1970s the building's owner ran a newspaper delivery service from the ground floor.  He was approached by a "film maker" who was desirous of renting the second floor.  After an agreement was reached, the tenant made alterations, including a metal security door.

The owner's suspicions were slightly raised when his new tenant demanded that "no one" was to be admitted upstairs and, in addition, paid his rent only in cash.  It was only after police raided the premises that the owner (whose delivery business was always closed during the night) discovered there was an illegal gambling den operating there.

His son, Guy Mitchell Lewit, is a co-owner of the property today.  He recalls that the police used "axes and sledgehammers" to destroy the gambling tables.  "The entire space," he said, "had been carpeted in dark purple, including the floors, walls and ceilings."


Through it all the little brick carriage house survived as East 74th Street saw the rise of large factories and apartments houses and the massive power plant at the eastern end of the block.   Today, the unexpected survivor is painted a Halloweenish orange and black, and is home to the studio of respected art conservationists Simon Parkes Art Conservation.