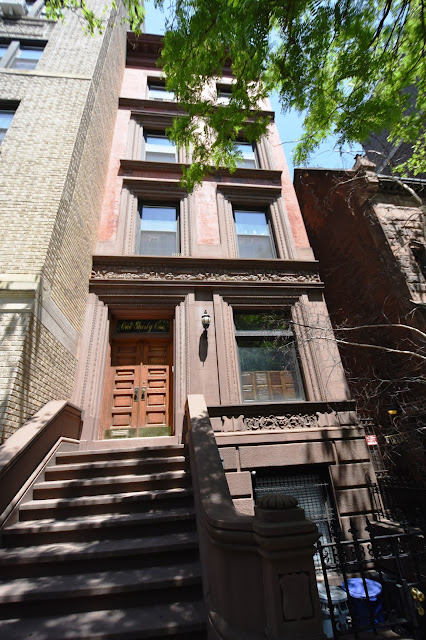 Developers John T. and James A. Farley were highly active on the Upper West Side in the 1880s and ’90, often utilizing the architectural firm of Thom & Wilson.   Interestingly, the brothers used both the professional names of “J.T. & J. A. Farley” and “Terence Farley’s Sons.”

As an example, two announcements appeared on March 29, 1890 in the Real Estate Record & Builders’ Guide.  One noted “Terence Farley’s Sons will erect four four-story private dwellings on the plot on 71st street, between 9th and 10th avenues, adjoining St. Andrew’s Church…architects, Thom & Wilson.”  The other announced “Thom & Wilson are the architects for the seventy-story flat, to be built by J. T. & J. A. Farley, on the block bounded by the Boulevard, 10th avenue, 69th and 70th streets.”

The four houses would be built on vacant land stretching from No. 131 through 137 West 71st Street recently purchased by the brothers from St. Andrew’s Church.  The projected cost for each was $22,000 (about $590,000 in 2016).  At a time when the exterior decoration of many homes could be deemed excessive; Thom & Wilson produced four refined and restrained Renaissance Revival residences.

The eastern-most, No. 131, was separated from the church by a service walkway.  Like its neighbors, it was four stories tall above an English basement.  The brownstone of the rusticated basement continued to the parlor level.  The brownstone stoop forewent the more expected iron for solid stone railings and newels.  Three stories of red brick were trimmed in brownstone.  The architrave openings were delicately decorated with carved chains and beadwork; and between the parlor and second floor an exquisite carved frieze displayed open-hulled nuts, a pineapple and even a bursting ear of corn. 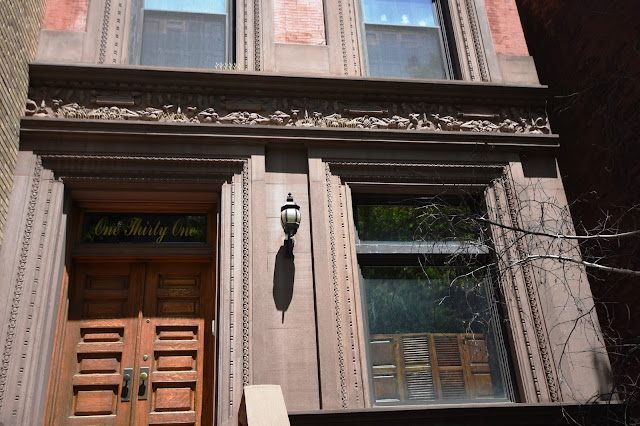 No. 131 became home to the family of well-known educator Duane Shuler Everson following his marriage to Marie Louise Fergusson in 1895.   He started his career at Columbia College in the 1860s where he was Secretary to the President, as well as a tutor in Latin and Greek Language and Literature.  In 1883 he established the Duane S. Everson’s College School for Boys, which prepared well-heeled young men for higher education.  Everson’s financial and social status was evidenced in 1892 when he was accepted into the Union League Club.

Everson and Marie Louise would have two children, Helen and Duane R. Everson.  As he grew, young Duane seems to have coveted his father’s issue of the New-York Tribune for its weekly “For Little Men and Little Women” section.  In it puzzles and challenges were posed to the young readers who could win prizes such as a dollar or a sterling pin.

“Dear Editor:  I received my fountain pen this morning for which I thank you very much.  I am sure I shall enjoy it, because I have always wanted one.  Thanking you again, I remain, your faithful reader, Duane R. Everson.  PS—I am writing this letter with the pen.  No. 131 West 71st street, New York City.”

Duane was not finished with his diligent puzzle-solving and in October that year he won a “boy’s Tribune watch.”

Among Duane S. Everson’s students at Columbia had been William H. Sage, who graduated in 1871.  His class members had included esteemed New Yorkers Stuyvesant Fish, R. Fulton Cutting. Oscar S. Straus and George B. De Forest.  Sage spoke at the 1921 graduation exercises, the 50th anniversary of his own.

The New York Times reported on his remarks on May 29, saying in part “The only known to be living who gave instruction to the class, Mr. Sage said, is Duane S. Everson, tutor in Greek, who is regularly at the meetings of the Union League Club, of which he is an enthusiastic member.”

Only a few months later, on Saturday, December 17, Duane Shuler Everson died in the 71st Street house.  His funeral was held there the following Monday morning at 10:00.

Neither Duane nor Helen married and remained at No. 131 West 71st Street with their mother.  Nearly three decades after her husband’s death, Marie Louise Everson died in the house on Sunday, February 5, 1950.  Her funeral was held in the parlor the following Tuesday afternoon.

Unlike so many of the 19th century homes in the neighborhood, No. 131 remained a single-family residence; the Emerson family retaining ownership until 1980.  In the meantime, the other three houses in the original Thom & Wilson row had been demolished for a rather unexciting apartment building. 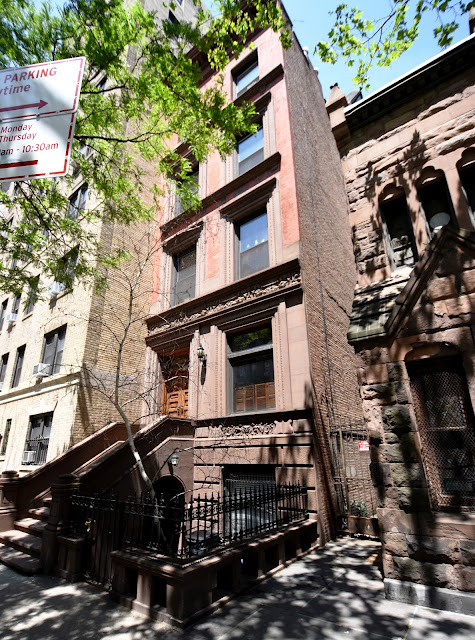 Subsequent expected modernization mostly preserved the original interior details.  The house was placed on the market around 2015 for just under $10 million.  The rather lonely survivor of a more elegant period joins forces with the former St. Andrews Church to create a charming anachronism which interrupts a string of mostly mundane apartment buildings.