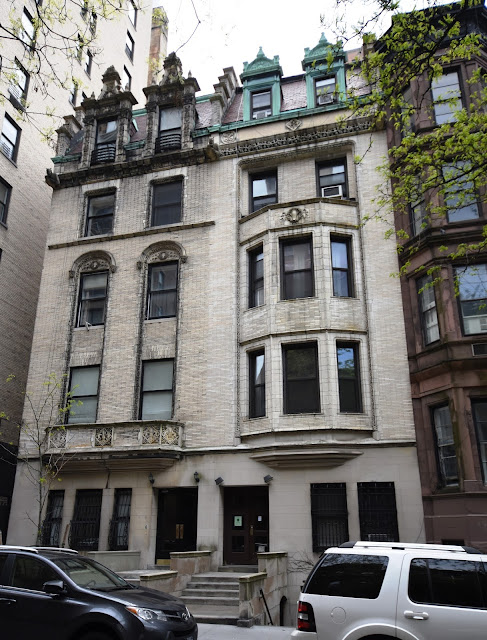 Little is known of the partnership of Norman & Farber, now essentially forgotten.    What is certain is that they handled every step of the speculative real estate operation other than construction--from purchasing the plot, developing the site, designing the structure, and acting as their own agents.

In 1897 the firm purchased four vacant building lots on West 87th Street, just off Central Park, stretching from No. 2 through 8.  The Real Estate Record & Builders’ Guide vaguely noted that Norman & Farber “will improve” the plots.   Shortly afterward, on July 1, Engineering News reported that the firm would erect four four-story “brick dwellings” at a cost  of $97,000.

Completed the following year, the residences were actually five stories tall, including the full-height mansard roof levels.  Norman & Farber had turned to the Francis I Revival style, sometimes called Chateauesque.   Taking inspiration from the 15th and early 16th century estates of France’s Loire Valley, the style was most evident in America in Richard Morris Hunt’s lavish Vanderbilt palaces—like Biltmore in Asheville, North Carolina.   The 87th Street houses would be a bit more scaled down.

Norman & Farber placed the houses on limestone bases.  Designed in the “American basement” plan, their entrances were just a few steps above the sidewalk.  The service entrances to the basements were nestled below the porch.  Above, three stories of buff brick featured restrained stone decoration; while the mansard levels exploded with decorated dormers—those at No. 6 framed in carved stone and at No. 8 in copper.  Stepped gables separated the rooftops.  Now lost, Nos. 2 and 4 were most likely mirror images, the group designed in an A-B B-A pattern; although with no photographs other documentation, we can only speculate.

Norman & Farber had taken out a substantial mortgage on the project from Nathan Mayer; and so when Horatio Page purchased No. 6 in August 1898 for $52,000 the partners were no doubt elated.  The amount Page paid would amount to a little more than $1.5 million in 2016.
.
Page was just 29 years old when he purchased No. 6.  The successful advertising agent and his wife had barely settled into their new home when he was called to serve on the jury of the sensational William A. E. Moore case.  Moore, who had just been appointed by President McKinley as U.S. Consul to Durban, South Africa, was married to Fayne Moore, the daughter of the Chief Justice of the Supreme Court of Oregon.   The couple was arrested on November 6, 1898 on charges of extortion and blackmail.

Mayer resold No. 8 to James H. Peterson.  It was sold and resold several times until Mrs. C. G. Shepard purchased it around 1901 as an investment property.  She leased it as a private home to well-heeled tenants.

In the meantime, Joseph and Frances Hein purchased No. 6 in 1902.  The couple had nine grown children: Louis, Harry, Theodore, Isa, Charles, Jessie, Ernst, Hyman, and Leonora.  Jessie, who was still unmarried, lived with her parents.

As was the case with many well-to-do but not overly-wealthy families; Joseph Hein was apparently sometimes left at home to attend to business while the female family members sailed off to Europe or summer resorts.

On May 17, 1908 The New York Times reported on the popular German “watering places” among Americans.  The article noted that Berlin was used by Americans as “a half-way station” to resorts like Weisbaden, Carlsbad, Marienbad, and Baden Baden.  “Berlin’s American season is in full blast, and the steamers arriving at Hamburg and Bremen are bringing scores of transatlantic visitors,” remarked the newspaper.  “Among the week’s arrivals at the leading hotels were…Mrs. Frances Hein [and] Jessie Hein.”

On February 25, 1910, Joseph L. Hein died at the age of 68.   His funeral was held in the 87th Street house two days later.   Frances stayed on in the house.
Leonora was married to wealthy auctioneer Benjamin S. Wise.  They had lived at No. 19 West 125th Street for years; but around the time of Joseph’s death had moved closer to Frances at No. 315 Central Park West.  On January 12, 1913 the Wises announced the engagement of their daughter to Gustav Frank.  The New York Times noted “A reception will be given in their home some time in the near future.”  Instead, the reception was held in Frances’s house on Sunday, February 16.  It would be one of the rare elaborate entertainments in the Hein house.

Frances Hein died at the age of 74 on December 6, 1921, after nearly two decades at No. 6 West 87th Street.  Unlike her husband’s, her funeral was not held in the house, but at Synagogue B’nai Jeshurun on West 88th Street.

The house next door at No. 8 had seen several residents come and go by now.  In 1907 L. M. Mooney leased it from Mrs. C. G. Shepard.  Mooney, active in the American-Irish Historical Society, lived here for several years.  By 1912 it was home to Norman W. Dodge and his wife.  Dodge was the son of William Earle Dodge, known as a “merchant prince” of Wall Street, and the brother of Anson Phelps Green Dodge.

Twelve years later the Dodges were gone and William Steiner and his family lived at No. 8.  Steiner was the captain of waiters at the Ritz-Carlton Hotel and his position required that he take good care of the hotel’s upscale patrons.  And so when well-dressed gentlemen visited the Roof Garden a few times in the summer of 1924 he secretly let them know he could supply them with champagne for “$20 a quart.”

Unfortunately for Steiner, the seemingly classy gentlemen were Federal Prohibition agents.  On the evening of July 11 agents raided the Ritz-Carlton Roof Garden.  The New York Times reported “The sudden appearance of the agents caused excitement among the 400 diners, many of whom objected to the action of the agents as they went from table to table in search of forbidden drinks.

According to the agents, many of the diners tipped over their glasses and spilled the evidence and others drank the evidence they were seeking.  While the search was in progress the orchestra played ‘What’ll We Do?’”

Arrested waiters, still wearing their evening clothes, were marched through the hotel.  William Steiner was not on duty that evening, but an arrest summons was left behind for him.

The former Hein house was being leased, still as an upscale private home, at the time.  One tenant was internationally known.

When Julia Gertrude Lyle married British lawyer and speaker Alexander Samuel in 1916, the newlyweds compromised on their married names.  They each took the surname Lyle-Samuel.   Julia had raised social eyebrows in 1910 when she married former Lord & Taylor partner John S. Lyle.  The young nurse had been hired to take care of the feeble man.   When they shocked his family by marrying, he was 92 years old.  One month after changing his will, giving the bulk of his estate to Julia, he died at the age of 94 in 1912.  She inherited a reported $5 million.

Far wealthier than her new husband, Julia financed Alexander’s campaign for election to Parliament.  He served five years in the House of Commons.  Although living in England, she continued to conduct a fresh air farm for poor children at her Tenafly, New Jersey estate.

On March 17, 1930 Julia received a Reno divorce from her husband, claiming cruelty.  Newspapers said “She will resume her former name, and will make Reno her permanent home.”

But instead, two years later, Julia leased No. 6 West 87th Street from Mrs. H. Short.  The New York Times noted that she “intends to occupy.”  Not only did she occupy the house, she soon purchased it.   She remained here until her death at the age of 62 on December 11, 1939.  Three decades had not fogged social memory and in reporting her death The New York Times reminded readers that her “marriage twenty-nine years ago precipitated a sensation in Northern New Jersey.”

Julia Lyle’s estate maintained the house as a private home, leasing it until 1946.  That year the house was sold and a year later was converted to apartments, with a doctor’s office on the first floor.

No. 8 also managed to survive as a single family home—at least on paper—for the first half of the century.  In actuality, by 1938 it was being operated as an unofficial rooming house.  That year its owners received a “multiple dwelling violation” from the Department of Buildings.

Far different from the Dodge or Mooney families who had lived in the house early in the century, 50-year old Enrique Sauzet had an apartment in No. 8 in 1953.  He was better known by his alias, Henry the Butcher.  In April 1953 he and three cohorts were arrested by Federal Narcotics agents after a six-month investigation.  The men were said to be “members of a huge narcotics ring that sold $250,000 worth of pure heroin in the last six months.”

The men were held in $25,000 bail each; the agents saying that they had about 175 pounds of heroin—worth more than $100 million—among them. 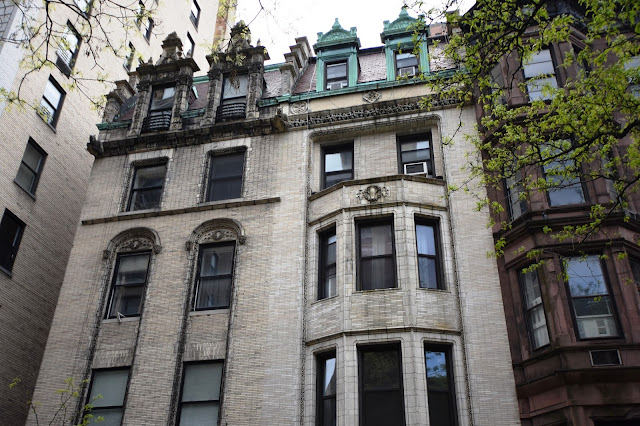 Despite their rather unkind treatment throughout the rest of the century and into the 21st; the two surviving houses of Norman & Farber’s 1898 row maintain their imperious architectural personalities—two dowagers in faded finery.