In 1860, one year before the outbreak of Civil War, the block of West 11th Street between Bleecker and Hudson Streets was lined with handsome brick homes erected in the 1830s and ‘40s.  That year a four-story building was erected at No. 290, just off the corner of Bleecker Street.  Above the ground floor shop were residential floors.

The shop space became a grocery store.  Henry Kearney was looking for a helper in 1870  and his help-wanted advertisement suggested the job would be no picnic.  "Wanted--A porter in a grocery store.  Must be strong and active."

The building was owned by an Irishman, Michael McKeon, and upstairs the tenants were mostly Irish immigrant families.  One of them, the Halligan family, suffered tragedy on Monday, December 30, 1872.  The following day, on New Year's Eve, The New York Herald ran the obituary of James Halligan "aged 2 years, 4 month and 21 days."

Next door to Kearney's grocery store was the oyster saloon of Joseph Hallock.   At 1:20 on the morning of March 18, 1873 Hallock's range overheated, sparking a fire.   Before fire fighters could respond, it had spread into Kearney's grocery store.  Kearney suffered $5,000 in damage to his stock (more than $100,000 in 2016).  Fortunately both he and Michael McKeon were covered by insurance.

Officer Hawkey of the Fire Marshal's office was not pleased with Joseph Hallock's negligence.  "A fire occurred at the same place on September 3, 1870, from the same influence," he told reporters.

Henry Kearney discovered that his grocery store did not include the public sidewalk in 1877.   On December 6 that year The City Record reported that an “obstruction” was removed from the sidewalk in front of Kearney’s grocery store:  “8 barrels of apples.”

J. W. Flynn lived upstairs in 1874.  He worked at the A. T. Stewart drygoods store on 10th Street.  On Wednesday, November 4 that year he lost his pocketbook containing private papers.  In a panic to regain his documents, he placed an ad in The New York Herald offering the sizable reward of $20 for the return of his pocketbook.

In 1887 R. J. Bowden moved his business into Henry Kearney’s former grocery store.  He had begun business in 1865 after already having “an extensive experience in the grocery line, having served a long apprenticeship with his brother,” according to New York’s Great Industries in 1885.  His brother was James Bowden and the two operated under the name R. J. Bowden & Bro.

Dealers in “fine teas, coffee, butter and flour,” they had recently been at No. 631 Hudson Street, near Jane Street.  New York’s Great Industries assured its readers that the Bowden store was “fitted up and stocked with the finest quality of staple or fancy groceries, teas, coffees, butter, flour, canned goods and all kinds of fruit.”  It added that R. J. Bowden had “an agreeable manner and is doing a first-class trade.”

James Bowden apparently had a side-line.  On June 2, 1887 he advertised his dog, Silver Shoe, in the weekly Forest and Stream, “a weekly journal of the rod and gun,” for stud.  “Small imported pug dog, sire of many winners.  Stud fee $10.”  The avocation would not be enough to allow Bowden to quit the grocery business, however.  The stud fee would amount to about $257 in today’s dollars.

On October 18 a heart-breaking article in the National Tribune noted that she "desires any comrade who served with her husband...to communicate with her.  She is applying for a pension, and wishes to obtain the necessary evidence that the disease from which her husband died in 1869 was contracted while he was in the service.  She is now in her 70th year of age and is very poor, and needs the pension to enable her to keep out of the poor-house."

The Bowden grocery store would remain at No. 290 until the turn of the century.  Then in 1900 the space became home to Westervelt & McIntyre, carpenters and builders.  The firm’s advertisement in The Tammamy Times on November 12, 1900 promised that it “promptly attends to orders and cheerfully furnishes estimates.”  Westervelt & McIntyre would operate from the ground floor at least through 1904.

Meanwhile, the rooms upstairs were still occupied by mostly Irish immigrants.  In September 1903 Charles F. Gallagher was living here when he was declared Vice President of the Society of St. Vincent de Paul.  Less upstanding were residents John Chancy and James Kingsley, who were here at the same time.

On Friday, May 19, 1905 The Sun reported on a raid on "The Silver Club;" an illegal gambling den in the notorious Tenderloin District.  Among those arrested and charged with adding and abetting in gambling was John Chancy.  He listed his occupation as "speculator."


James Kingsley had his own run-in with the law a month later.  On April 16, 1905 the 24-year old had been drinking at the Sports' Cafe on the corner of Bleecker and Sullivan Streets.  He got into an argument with James Arthur Hughes.  When it became too heated, the bartender threw them out "to fight it out."  Afterwards James Hughes was found unconscious in his room on Clarkson Street  and he died later that day.

It took Hughes's sister two months to track Kingsley down; but on June 27 he was arrested.  The Sun reported "Kingsley admitted the fight and said Hughes had received his injury in a clinch in which they both fell to the pavement."

Two years later Kingsley's drinking would get him in serious trouble again.  When he and three cohorts decided not to pay for their drinks at John McGee's saloon at No. 57 Carmine Street on February 24, 1907, McGee pulled a revolver.  One of the four remarked "You haven't the nerve to shoot."

The following day a headline in The Sun read "McGee Had The Nerve."  He shot James Kingsley in the back as he and his companions ran from the saloon.  The newspaper reported "His comrades ran away."


In 1913 No. 290 West 11th Street had suffered from neglect.  It was declared an “unsafe building,” by the city; a distinction it received again in 1920 and again two years later.

In 1931 Thomas Williams converted the old structure to apartments.  Then, with the issue of an unsafe structure seemingly behind it; another crisis arose.  On September 8, 1933 The New York Times ran an alarming headline that read: Termites In ‘Village’—Eleventh Street Building Is Reported Attacked by Pests.

The article said that Harry Stuckner, the “unofficial termite catcher for the city,” reported “that the insects, which travel in colonies, had been found in a building at 290 West Eleventh Street.  They are now in the lower part of the building and are making inroads on the supporting beams and joists, threatening demolition of the structure.”

The 73-year old building escaped demolition, however.  And in 1937 the ground floor space was home to Clark McKibben & Co. Inc., dealers in garden sculptures and furniture and architectural pieces like cast iron urns.  That year the company added its backyard to the City Gardens Tour to aid Greenwich House. 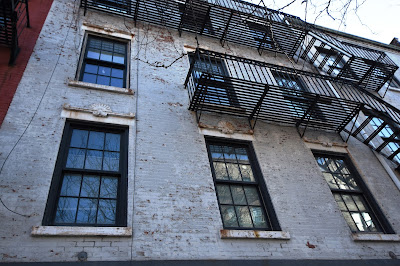 Later in the 20th century the storefront was eliminated to accommodate apartments on the first floor.  The owner cleverly “antiqued” the vintage façade by adding Greek Revival doorways and especially handsome anthemion-decorated lintels to the upper floors.  The elements, apparently rescued from a razed 1840s structure, fool the most astute observer even today. 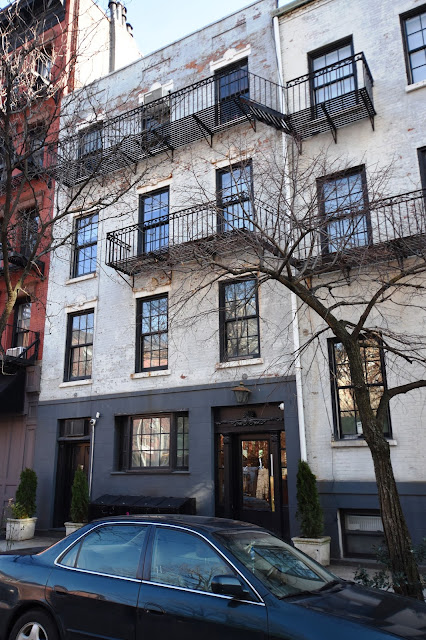