In April 1889 developer George Crawford purchased the 75-foot long vacant plot on the north side of 71st Street, between Central Park West and Columbus Avenue.  He paid Samuel Uhlfeder, who was living in Frankfort, Germany, $15,400 for the property.  Three months later the Real Estate Record & Builders’ Guide reported that architect Martin V. B. Ferdon had completed the plans for Crawford's row of homes.

Crawford toyed with the dimensions of the four houses that would fill the vacant plots at Nos. 33 through 39 West 71st Street.  The Guide noted that two of the homes would be 18-feet wide, one 19, and another 20.  Each four stories tall above an English basement, they would have “bay windows and be trimmed throughout with hardwood.  They will be fitted with centre stairways and open fireplaces. All the latest improvements will be introduced.”

The brownstone fronted residences were completed in 1890; their disparate widths essentially unnoticeable.  Ferdon had designed four unexceptional neo-Grec homes; to which he then added rather startling neo-Renaissance elements in an A-B-A-B pattern.  The rounded bays and entrances were embellished with elaborate carvings.  Highly unusual were the pierced, stepped wing walls that took the place of stoop railings.


No. 35 became home to the Louis Stix family.   Louis Stix had arrived alone in America at the age of 14 and set off for the Midwest.  While still in his 20s he co-founded a dry goods firm, Stix & Wallach, in Cincinnati.   Then, in 1850, the store was bankrupt.

Determined not to be defeated, the following year, on March 11, 1851, he married Yetta Hacke and started over.   Years later a good friend, Frederick F. Cook, would recall “As will happen, soon after disaster overtook him, and he lost his all.  But Louis Stix was not a man to be daunted by misfortune; he started afresh with an untarnished name, and the house of Louix Stix & Co. of Cincinnati, built upon the ruins of the family, is to-day the oldest dry goods house in the West.”

In 1863, thirteen years after Stix & Wallach failed, Louis hosted a dinner and invited all his old creditors.  On every plate was a check for the original indebtedness plus interest.

Shortly afterward, Stix moved his family to New York City.   He and Yetta would have 10 children, all grown by the time they moved into the new house on 71st Street.  Louis Stix had retired after being in the dry goods business for more than half a century.  He remained on the board of directors of Mount Sinai Hospital, a position he had held since 1875.

Daughter Frances was 23 years old and, as any respectable unmarried young woman would do, she moved into the new house with her parents.  She would not live here long, however.  On Tuesday, November 28, 1893 she was married to Jonas Fish Mann in the drawing room of the Stix house.

The aging couple was honored for their 50th wedding anniversary with a grand dinner and reception at Delmonico’s on March 11, 1901.  It was no small affair.  The New York Times reported that at the dinner were 75 “children, grandchildren and relatives.”  More than 200 friends came afterward for the reception. 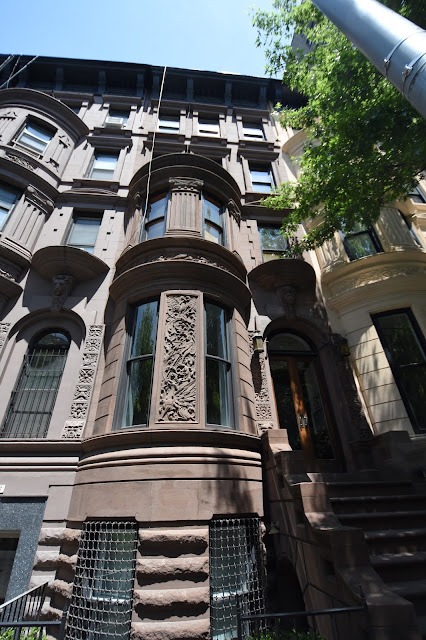 Louis was 83 and Yetta was 80 at the time, so when “the younger members of the party enjoyed dancing until a late hour,” they elderly couple most likely simply watched.  One guest described the evening, saying the guests “completely encircled the ballroom.”  He recounted that Louis Stix looked around the room and commented “Now I am ready to go; I believe I have had all that is coming to me.”

Yetta did not stay on in the house she had shared with her husband for a dozen years.  The family leased it to insurance executive and financier Edward Cornell Jameson.  He was in addition a director of the Golden Hill Building Co.   Although Jameson purchased the house from the Stix estate in July 1904; he left West 71st Street following his marriage to Mary Burchell Gardner in 1910.

No. 35 was now home to the Hilary Ranald Chambers family.  The 47-year old Chambers was President of the National Fire and Marine Insurance Company.  A graduate of Columbia College he was married to the former Maria Schenck Jameson.  With them in the house was their 14-year old son Hilary R. Chambers, Jr.

The couple enjoyed the lifestyle of affluent New Yorkers.  On June 14, 1910 The New York Times mentioned that Hilary and Maria “will sail on the Celtic June 18 to spend the season abroad.”  Three years later society columns reported that they would be occupying the Woodruff cottage in Lake Mahopac for the summer season.  Soon they purchased their own summer home there, The Hillocks.


Hilary R. Chambers, Jr. entered the United States Naval Reserves, achieving the rank of Jr. Grade Lieutenant by the time the country entered World War I.  He commanded a submarine chaser, the U.S.S. C-128.  According to military historian Edward M. Coffman in his The War to End All Wars, Chambers “claimed that the temperature in early August reached 140 degrees on the deck of his ship.  To add to the discomfort there was a food shortage.”

Following the war Hilary, Jr. wrote the 1920 book United States Submarine Chasers.  That same year on March 26, his engagement to Florence Elizabeth Carter was announced.  The New-York Tribune deemed the match “interesting.”  In reporting the announcement, the newspaper noted “Mr. Chambers is a Princeton man…He was decorated for gallantry by the Italian government.  He is president of A. F. Houts & Co., Inc.”

Shortly after the wedding, Hilary R. Chambers sold the 18-foot wide house to Camille L. Baessler in September 1921.  The New York Times mentioned that “the buyer will occupy.”  That was not the case, however.

In 1922 the New York Herald announced that Leroy Coventry, principal in the Leroy Coventry & Co., Inc. real estate firm had rented the house for five years.  By 1931 it was listed as a “furnished-room house.”

Once home to well-to-do families, No. 35 remained a rooming house for more than three decades.  In 1968 it was converted to apartments, one per floor.  And in 1996 another conversion was completed resulting in a duplex on the basement and parlor levels, one apartment on the second floor, and two each on the floors above.  Later the second through fourth floors were reunited as a five-bedroom co-op.

While the exterior of Ferdon’s rather remarkable hybrid design survives mostly intact; his interiors have been essentially brutalized.  They were made victims of the 1970s decorating trend which hammered the plaster off interior brick walls—the antithesis of 19th century style.

non-credited photographs by the author
Posted by Tom Miller at 12:58 AM