The Mission of the Immaculate Virgin Convent -- No. 381 Lafayette St. 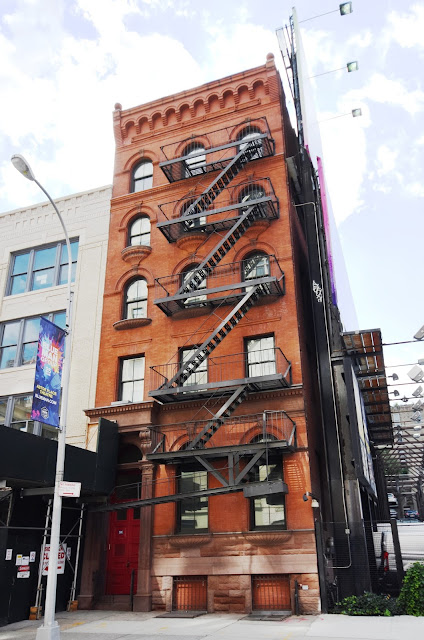 Lafayette Place in 1839 was still an exclusive residential neighborhood.  Wealthy merchant Alexander Mactier, whose office was at No. 153 South Street, lived at No. 6, just north of Great Jones Street.  It was an elegant four-story residence with a high stoop.  Its 27-foot width reflected the elevated social and financial status of the family.

In 1847 Dr. Alexander H. Stevens owned the house.  An esteemed surgeon, he had also been a member of the New-York Historical Society since 1817.  One of New York’s most well-known physicians, he was a Professor of Clinical Surgery at Columbia College.  The Stevens family was still here as late as 1866; but in 1868 the house was advertised for rent.

Stevens may have left Lafayette Place, like so many of his wealthy neighbors, because of encroaching commerce.  His new tenant exemplified the change in the district.  On March 18, 1868 a notice appeared in The New York Herald announcing “Madame Ferrero, No. 6 Lafayette Place, near Great Jones street, will open Paris Millinery on Thursday, March 19.”

Madade Ferrero catered to the Manhattan’s carriage trade and her imported European creations would grace the heads of the city’s wealthiest women.  On April 18, 1869 a New York Herald notice advised “Mme. Ferrero, No. 6 Lafayette Place, has now open an elegant assortment of Millinery; the new Summer Hat, ‘l’Italienne;’ also very choice styles of Paris Round Hats.”

By 1872 another commercial tenant was in the house.  Dr. Stuart advertised his “Electric Magnetic Treatment” on October 17 that year.  “Nervous Debility, Dyspepsia and other derangements treated by Electro-Magnetism.  Cures guaranteed in one interview.”

Stevens placed the house for sale in 1873, his agent noting it was perfect for “dwelling or business purposes.”  It was purchased by Parker Mann and his wife, Julia.  If the couple lived here at all, they had relocated to Washington DC by 1888.  That year on June 1 they sold the house to The Mission of the Immaculate Virgin for the Protection of Homeless and Destitute Children for $22,500 (about $578,000 in 2016 terms).

The Mission of the Immaculate Virgin, deemed by the New-York Tribune to be “a home for friendless children,” was founded at Mount Loretto, Staten Island, around 1870 by Rev. John C. Drumgolle.   In 1880 the mission erected the St. Joseph’s Home at Nos. 2 and 4 Lafayette Place on the site of the old St. Bartholomew’s Church, abutting the former Stevens house.

In 1891 Gustav Kobbe in his New York and Its Environs explained that the Home had two divisions:  “Those in the first division, destitute, homeless boys, who await the time when sufficiently strong and possessed of a good rudimentary and industrial education they may enter some trade, store or office in which the Mission secures them work, reside in the home.  The second division is for working boys who pay whatever they can for the excellent accommodations afforded them, and are apt, thanks to this Mission, to become self-supporting, honest and industrious citizens.”

The St. Joseph’s Home was run by the Sisters of St. Francis.  The newly-purchased house was conveniently located to become a convent and chapel for the nuns.

At the time of the purchase architect Benjamin E. Lowe had just completed plans for a Romanesque Revival chapel building for the St. Charles Boromeo Church on West 141th Street.  Within the year he would be working on the Lafayette Place project for the Mission of the Immaculate Virgin.

In March 1890 Lowe filed plans to alter the old residence, including “raised two stories, one-story and basement extension, interior alterations and walls altered.”  The rear extension would take the form of a chapel.  The extensive alterations, completed in 1891, would cost the Mission $40,000 and included a handsome up-to-date architectural facelift.

Lowe eliminated the high stoop while retaining the original lines of the entrance—resulting in a dramatic nearly two-story doorway.  The brick-faced Northern Renaissance Revival design included decorative details executed in terra cotta, brownstone and brick—a deeply corbelled cornice, decorative bandcourses and eyebrows.  Most eye-catching were the elaborate bowl-like treatments below some openings. 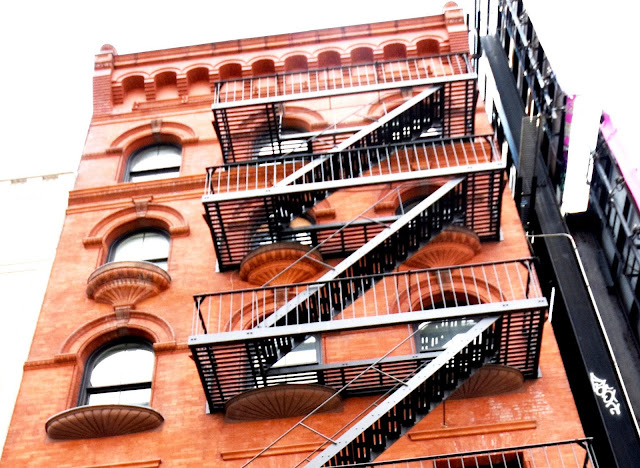 The Mission was apparently pleased with Lowe’s work.  The conversion was barely completed when he filed plans for a $275,000 church building on Staten Island for the Mission, and for a $90,000 “brick and stone laundry building” there.

The convent building also housed the administrative offices of St. Joseph’s Home.  Rev. James J. Dougherty, one of the Directors, had his office in the building.  He was shocked and infuriated when he picked up a newspaper in May 1898 and read an article in which the Commissioners of Accounts accused the Mission of the Immaculate Virgin of overcharging the city for its wards.

Among the examples given was the case of John Kane.  The boy had arrived at the home on February 4, 1892 and remained there until July 3, 1895 when, according to Dougherty, “he was transferred to the Home for Simple-Minded Boys on Randall’s Island.”

Incensed and accusing the city examiners of “gross carelessness,” Dougherty fired off a letter to The Sun.  “The Mission of the Immaculate Virgin never received one cent from the city of New York for the support of this John Kane,” he insisted.  “During his stay with us he was supported, as so many other hundreds of our boys are, entirely at the expense of the Mission of the Immaculate Virgin.”

Dougherty was careful not to say that all the boys in the Home were entirely supported by the Mission.  As Gustave Kobbe had explained, there were two types of boys housed in the St. Joseph’s Home.  The Directory of Social and Health Agencies of New York clarified in 1902 that the organization paid for “until employment is found for them, healthy boys, Catholic or otherwise, from 16 to 20 years of age, who are not criminals, but can furnish some references, and are without friends, entirely destitute.”

The second group of boys included those who could contribute to their board.  “It also provides meals and lodgings at $2 a week to newsboys, bootblacks, and other working boys able to pay, and instructs them spiritually and mentally.”

Interestingly, the Mission opened its doors to needy adults for Christmas dinner in 1904.  The New-York Tribune reported that “Fifteen hundred men and women were fed by the Mission of the Immaculate Virgin, at Lafayette Place and Great Jones-st.  The feast lasted from noon until 4 o’clock in the afternoon.  Father Fitzpatrick greeted each guest as he or she entered with a ‘Merry Christmas.’”

The Christmas dinner for adults may have been a one-time occurrence.   In 1908 the Tribune reported only on “the waifs cared for” by the Mission who “received a big dinner and also gifts from a great tree.”

In 1911 The Sun commented with some melancholy on the changes in the neighborhood following the sale of the old Astor Library building.  “The library has held more of America’s greatest literary men than any other building in the country, and its sale to a builder for improvement with a loft building will be a hard blow to its sentimental friends.”  The newspaper added “This seems inevitable, as it is with the exception of the Mission of the Immaculate Virgin, at Great Jones and Lafayette streets the only building in that section not used for business…This row was once the homes of some of the finest families in the city.  In one of these houses Mrs. Walter Langdon, daughter of John Jacob Astor lived.”

The changing climate of the area was further reflected when, in 1918, the Mission of the Immaculate Virgin abandoned St. Joseph’s Home and “the greater part of the work was transferred to the Mission’s headquarters at Mount Loretto, Staten Island,” according to The Times.  The vacant nine-story building was sold in May 1925 to the Grand Lodge of the Order of the Sons of Italy.

The group had grandiose plans for the structure and initiated a $1 million fund-raising campaign to convert it to a “great Italian community centre.”  But, as explained later by The Times, “eventually, due to internal dissensions, the scheme failed to materialize and the Mission was forced to take back the property at foreclosure sale in January, 1928.”

By now Lafayette Place had been renamed Lafayette Street and the convent building renumbered 381.  And the St. Joseph’s Home building was a white elephant on the shoulders of the Mission’s directors.  In August 1929 it sold the hulking structure which had stood vacant for a decade.  Shortly afterward, on October 6, The New York Times announced “Demolition of an old building on Lafayette Street which, for nearly half a century, was a well-known home for newsboys and destitute children, will begin this week.”  It was to be replaced with a gasoline station.

Sobol Brothers, owners of a chain of service stations, may have anticipated public dismay at the demolition of the old landmark.  An officer of the firm promised “something special” in the form of a “super-service station” possessing “genuine architectural charm and finished in terra-cotta.”

The Times mentioned “The adjoining structure at 381 Lafayette Street is still owned and occupied by the Mission and used for its city work.”

And rather startlingly, the Mission remained in the building until 1965.  On November 8, 1965 The Times reported “After an ownership of 77 years, the five-story building at 381 Lafayette Street has been sold by the Roman Catholic Mission of the Immaculate Virgin to Albert N. Roemer, who intends to alter the premises.”

Instead, the former convent was resold to artist Robert Rauschenberg who planned to use it as the center of his artistic work.  The artist’s work, by now, included large-scale sculptures and performances pieces which required large space.  The building doubled as Rauschenberg’s home.

In October 1969 Rauschenberg left New York for Los Angeles for work.  Around 3:15 on the afternoon of October 25 a passerby noticed wisps of smoke escaping from the windows.  Fire fighters responding to the blaze crashed through a skylight on the fifth floor.  Maurice Carroll of The Times poetically reported “But the old building apparently was tightly sealed and, like a rusty red aerosol container, it squirted out billows of smoke as soon as firemen broke the windows.“

Somewhat surprisingly, the fire fighters recognized that they were in the midst of sculptures, photo montages and silk-screen artwork.  They carefully stepped around the pieces, valued at about $200,000 in total.

The blaze in what Carroll described as a “weather-grimed building” was brought under control by 4:38.  Rauschenberg’s assistant, Brice Marden carefully checked the art, including a sculpture “Oracle” valued at $120,000, and said there was little damage that could not be repaired.

The article mentioned the much-changed Lafayette Street.  “It is a bleak warehouse neighborhood.  Two oblivious drunks lurched past the fire, stumbling over the hoses that curled across the sidewalk.”

In 2008 the conservation architectural firm Preserv  completed a restoration of the façade that included a complete disassembly and rebuilding of the intricate brick cornice, cleaning and repointing of the brick, and reconstructing damaged brownstone elements.  The building is still home to the Robert Rauschenberg Foundation.

photographs by the author
Posted by Tom Miller at 3:35 AM