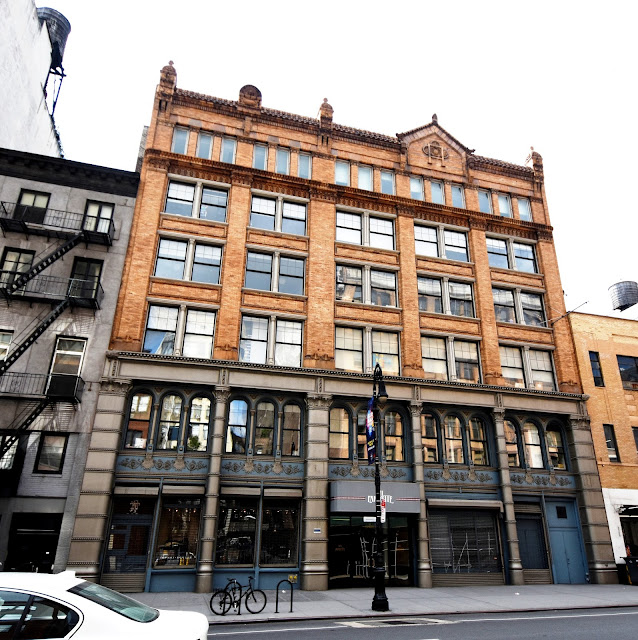 In 1891 Simon Goldenberg seems to have been less focused on his lace importing business than in real estate development.  He embarked on several projects to erect modern loft buildings in the Lafayette Place area.

In the early decades of the century Lafayette Place had been Manhattan’s most exclusive residential neighborhood—home to wealthy citizens with names like Astor, Delano, Vanderbilt and Schermerhorn.  At mid-century No. 24 Lafayette Place was the site of the Samuel Willets residence.  But by the 1870s millionaires had migrated northward and one-by-one the mansions fell.

On March 21, 1891 the Real Estate Record & Builders’ Guide reported that Alfred Zucker was designing an “eight-story fire-proof building” to be erected at Nos. 24 and 26 Lafayette Place for Goldenberg.  The article noted “It will be planned for a printing and lithographing establishment, and we understand a lease has already been taken.”

Within a month Goldenberg had acquired the abutting property at No. 22 and revised his plans.  Zucker was set to work designing a six-story building at Nos. 22 and 24, and a harmonious structure next door at No. 26.  The “brick, iron, stone, and terra cotta” buildings were projected to cost $160,000 and $120,000—in the neighborhood of $4.3 million for the wider edifice.

The buildings were completed in 1892.  Zucker designed them in the Northern Renaissance Revival style.  Interestingly, while the main structures matched perfectly, Zucker avoided creating the impression of a single building by treating the cornices differently.  The result was a somewhat confusing asymmetry.

Simon Goldenberg died in 1897; however his family retained possession.  In December 1901 architect Albert S. Gottlieb filed plans for alterations that included “new plumbing, improving present elevators, skylights, light prisms, etc.”   Among the tenants in the buildings were a men’s clothing manufacturer and George L. Storm & Co., a manufacturer, retailer and distributor of cigars.

George L. Storm & Co. occupied space in the southern building, Nos. 409-411.  Called by the trade journal The Tobacco Leaf in 1908 “among the large retailers of New York,” the firm faced a crisis in 1907.  Although good cigars were an obligatory accessory to wealthy gentlemen, the Financial Panic of 1907 threatened the purveyors of luxury goods.  But George L. Storm & Co.’s moderately-priced cigars carried the firm through.

The Tobacco Leaf noted on May 6, 1908 “Notwithstanding the general trade depression of the past six months, George L. Storm & Co. have succeeded in extending their business over the corresponding months of 1907, a fact that is attributed in the demand for staple brands of cigars.  That demand has steadily increased since the beginning of the October panic, and its continuation is unquestionably assured by the conditions of the trade at the present time.”

On October 16, 1911, Louis Schlesinger, Vice President of George L. Storm & Co., left his home at No. 240 West 102nd Street, headed to work.  A diabetic, his physician had warned him several years earlier to retire.  The New York Times reported simply “He refused.”

As the 55-year old executive neared the door of No. 411 Lafayette Street, he collapsed to the sidewalk.  Within a “short time,” according to The Times, he was dead.

The cigar company was still in the building in 1915 when Louis Schlesinger’s brother, Siegmund, held the position of Treasurer and Director.  Home B. Lyon had taken over the Vice Presidency formerly held by Louis.

A sidewalk grating at the rear of the building was discovered by homeless men as a refuge from cold nights.  Here warm air wafted upward from the basement engine room.  It was the scene of tragedy on November 17, 1924 when unseasonal and unpredicted conditions slammed the city.   The following day The New York Times reported “The temperature dropped in fifteen hours from 48 to 18 degrees, the lowest mark recorded for any Nov. 17.  The wind reached a maximum of 68 miles an hour and most of the day varied between 50 and 60 miles an hour.”

Because the weather prediction had simply been “cooler,” no extreme conditions were expected, so the furnace at No. 411 Lafayette Street had not been fired up.  An elderly man sought out the grating; but this night there was no relieving warmth.  He was found dead from exposure the following morning.

“In the past [the grating] has saved many a life by providing a little heat for penniless and homeless men who have been unable to find any other shelter.  But last night’s cold snap had taken the city by surprise,” explained The Times.  “The old man lay down on the grating and found it as cold as the sidewalk.  He may have stayed there clinging to the hope that some heat would come up later.  At any rate, he stayed there until he died.”

The building was the scene of a terrifying hold-up attempt during the Great Depression.  On November 11, 1930 five armed men burst into the ground floor doll factory of E. I Horsman.  With pistols drawn, they demanded to know where the cash payroll was.

Cashier Philip Menger was in the rear office at the time.  He had just made up the $8,000 payroll when the robbers entered.  He quickly stashed the cash into the safe and locked it.  Five women employees, threatened with firearms, directed the thugs to the back office.

But Menger refused to open the safe.  “I don’t know the combination.  Only the manager knows it, and he isn’t here.”

Just when things could have become violent, an automobile horn sounded from outside.  A lookout signaled that a policeman was approaching.  A newspaper reported “The intruders pocketed their weapons, walked out to the automobile and drove away while the patrolman, who knew nothing of their attempt, watched them.”

For decades the combined buildings were home to a variety of businesses—the Columbus Metal Frame Co. in 1936; Belle Book Binding in 1939; and the Spencer Paper Company in 1946, among them.  In 1949 the plumbing accessories firm Durst Manufacturing Company unveiled its new “Styrofoam closet combination float, made of polystyrene.”  The home improvement produce was deemed “practically indestructible in use,” according to a spokesperson.

Durst Manufacturing was still in the building in February 1987 when Meringoff Properties signed a 49-year lease with long-time owner Aredlo Realty Co.   Leslie Wohlman Himmel, partner in Meringoff Properties, announced that “rehabilitation will begin in April upon the departure of the current tenant, Durst Industries.”  The completed renovations resulted in 65,000 square feet of modern offices with 14,000 feet of retail space on the ground floor. 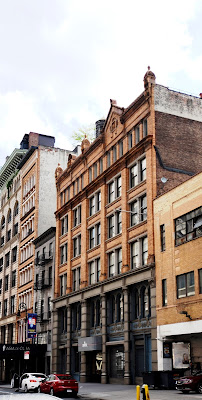 The façade, which had survived nearly intact even at street level, was handsomely restored; resulting in Alfred Zucker’s seemingly unbalanced building looking much as it did nearly 125 years ago.

many thanks to reader Benjamin George Friedman for requesting this post
photographs by the author
Posted by Tom Miller at 2:45 AM