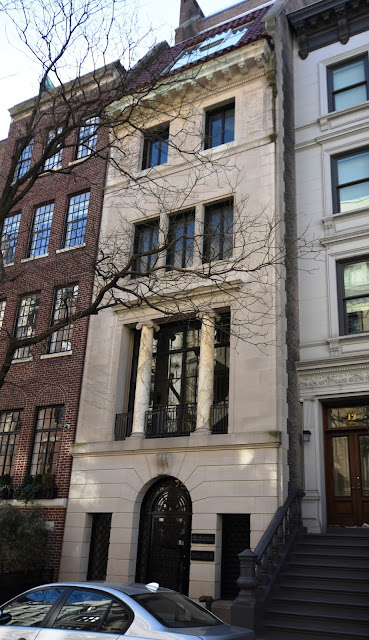 In 1886 developers Charles Graham & Sons began construction on a row of six high-stooped houses on East 78th Street.  Steps away from Fifth Avenue and Central Park, their reserved, four-story stone facades would reflect the respectable, upscale families who occupy them.

As was customary, the title to the property was placed in the name of Morganstern’s wife, Madlon.   A wealthy rubber merchant, Albert was active in charitable causes.  He was, for instance, a director of Primrose House, a branch of the Society to Befriend Working Girls.

In a surprising transaction on October 5 1891, Madlon sold half of the house to Albert for $22,500.  Possibly, this Albert was the Morganstern’s adult son; although the absence of the designation of “Jr.” or “Sr.” in the paperwork makes it a mystery.

In the 30 years Morganstern had lived in the house, the block had changed.  Vintage, high-stooped rowhouses were being demolished or transformed as even wealthier New Yorkers moved into the neighborhood.  Now, directly across the street from the Morganstern house was the magnificent, five-year old free-standing palace of James B. Duke.  In reporting on the sale of No. 14, the Record & Guide pointed out “The building may be demolished and a residence of the English basement type erected by the buyer for his own occupancy.”

As Albert Morganstern had done, Miller put the property in the name of his wife, Grace Saunders Miller.   Two months after the sale he commissioned architect Harry Allen Jacobs to design a “5-story brick and stone dwelling” with a projected price of $50,000.  The Real Estate Record & Guide predicted it would be a “handsome private residence.”   And the journal was right.

The completed mansion was a dignified—nearly austere—modern take on the Italian Renaissance.   Above the centered, arched entrance was the home’s most distinctive feature; a deeply recessed set of French doors fronted by two richly-veined Ionic columns.  An unembellished set of grouped, diamond-paned openings were at the third floor; while one story above three delicate bas-relief panels were separated by the two windows.  Above the limestone cornice was a sloping roof of deep red Italian tiles. 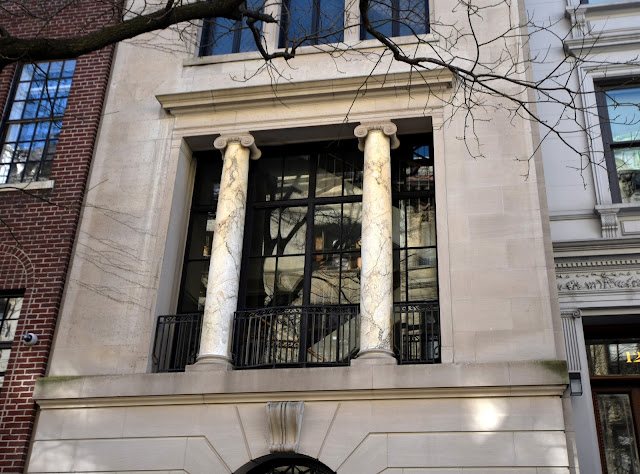 Born in Washington DC, Andrew J. Miller was graduated from Georgetown University in 1888 and arrived in New York in 1897.  He was a member of the banking firm Boissevain & Co. and a director, along with millionaires William Rockefeller and Henry Huddleston Rogers, of the Anaconda Copper Mining Company.

The 50-year old banker and his wife had one daughter, Frances.   As was often the case with the wives and daughters of wealthy men, Grace and Frances sometimes left Andrew in New York conducting business while they traveled.  And so Andrew spent Christmas alone with his servants in 1920 while the female two-thirds of the family spent the holidays with Grace’s mother in Cleveland.

Nevertheless, more often than not, the family traveled together.  In March 1923 they went to the fashionable resort of Hot Spring, Virginia.  The New York Times noted that Frances “is attending the Farmington School and is on her Easter vacation.”  They were back that fall and on September 5 a local newspaper reported that “Mr. and Mrs. Andrew J. Miller of New York gave a riding party yesterday afternoon for their daughter.”  The article noted “Mr. and Mrs. Miller and their guests rode over Cole’s Mountain and through the jungles of the Jackson River, and on their return had dinner at Valley View.”

Frances’s education continued in France where she attended finishing school.  She returned for the winter season of 1924 in time for her coming out entertainments.   Andrew and Grace threw a “large dinner party” on the night of December 20 at Pierre’s.  The young men and women who dined and danced that evening included the cream of young society.  The guest list included names like Dodge, McAlpin, Bouvier, Gould, Cushing and Bostwick.

By 1930 the Millers had moved to No. 53 East 70th Street.  The 78th Street mansion became home to the John Nickerson family.  That spring Mrs. Nickerson hosted a series of lectures on municipal hospitals in the house.   Their residency would not be long-lasting, however.  In 1931 they sailed for Europe and in July 1932 leased the house to Hicks Arnold Weatherbee for three years.  The New York Times noted at the time that Nickerson “is abroad and upon his return will occupy the house.”

Weatherbee was the grandson of James M. Constable and the great grandson of Aaron Arnold, founder of the Arnold, Constable & Co. department store.  Born in 1885 he was educated at the exclusive Andover Academy, at Yale University, and the New York Law School.  Despite his legal education, he joined Arnold, Constable & Co. in 1912 and three years later became its president.  It was under Weatherbee that the firm moved to its Fifth Avenue and 40th Street location.  Following World War I the department store was sold and Weatherbee founded Weatherbee & Co., a dry goods business.

On January 5, 1934 Margaret Kip Weatherbee was in Philadelphia visiting relatives.  In her absence Hicks took the opportunity to have a pair of her diamond earrings repaired.  When he opened the safe where they were kept, he found them missing.  Hicks telephoned his wife who confirmed she had not taken the “ear pendants” with her.  He hung up the phone and called police.

Not only were the earrings missing, but so too were a pearl necklace and several rings—a haul of $10,000.   The following day The New York Times reported “Three servants were questioned, but detectives said they had not been able to determine how the jewelry was removed from the compartment.”

The Weatherbees’ lease expired in 1935; but the Nickersons by now had decided to remain in Europe.  In May that year they sold No. 14 East 78th Street to their tenants for $78,000.  The title was transferred to Margaret Kip Weatherbee, Inc.

On August 1, 1940 Hicks and Margaret traveled to California on vacation.   Less than two weeks later, on August 12, Weatherbee became ill.  When his condition worsened he was admitted to the Good Samaritan Hospital in Los Angeles on Tuesday the 20th.   He died there of acute pneumonia three days later at the age of 54.

Childless, the bulk of Weatherbee’s estate went to Margaret.  His will also directed that she distribute $25,000 at her discretion among the household servants and his employees.

Unlike so many of the splendid private homes in the neighborhood, No. 14 remained a single-family residence until 1983 when it was acquired by New York University for its Institute of Fine Arts, which already occupied the Duke Mansion across the street.  Called the Stephen Case House, the university described the function of the new facility as “teaching and research in art conservation.”

Upon its opening The New York Times noted on October 2, 1893 “While more space, skylights and terraces were added, the 19th-century façade was preserved.”  The newspaper may have gotten the century wrong, but indeed the façade remained untouched.  A highly unusual example of the architectural style, the structure appears much as it did when the Miller family moved in in 1918.

photographs by the author
Posted by Tom Miller at 4:41 AM