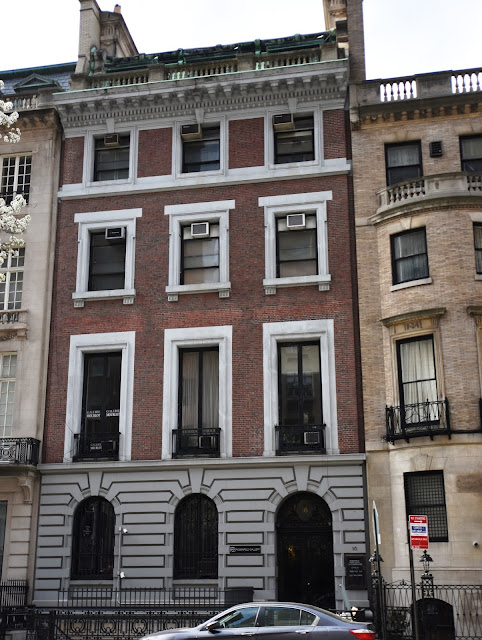 Before Henry H. Cook erected his massive stone mansion on the corner of Fifth Avenue and 78th Street, he took steps to assure the exclusivity of the neighborhood.   He purchased bought the entire block from Fifth Avenue to Madison Avenue, 78th to 79th Street; and then slowly and methodically sold off the plots of what became known as “the Cook Block” with the codicil that only high-end, single-family homes could be built on the site.

In 1912 The New York Times would recall “Not only, according to his idea, was the block to be used for private homes forever, but the new houses were all required to be of a certain type of construction, and he would not sell to any one who was not able to or willing to improve his plot in splendid style.”

By the turn of the century Manhattan’s millionaires had reached the Cook Block.  In 1901 Sidney Dillon Ripley, treasurer and director of the Equitable Life Assurance Society, commissioned Warren & Wetmore to design a 35-foot wide mansion at No. 16 East 79th Street.  It was the first step in what would be a very long and possibly frustrating process.

On January 11, 1902 the Real Estate Record & Builders’ Guide mentioned that the foundations were under way.   More than two years later on February 13, 1904--at a time when substantial construction projects were often completed within 12 months—the Guide noted that the house was still under construction.   By July the interior trim was being installed; and finally on November 26, 1904 the mansion was completed.

Warren & Wetmore had designed a five-story brick-and-limestone urban home reminiscent of 18th century London.  The neo-Georgian design featured a rusticated limestone base and columned portico above a two-step porch.  The red brick of the upper floors formed a canvas for the white stone window enframements and cornices, and bandcourses.  A dignified Georgian balustrade crowned the cornice, upon which perched four massive stone urns.  It slightly disguised the mansard roof with its copper-clad dormers.

Sidney Ripley had married Mary B. Hyde in 1886.  Mary’s brother, James H. Hyde, was the principal shareholder of the Equitable Assurance Society, where Sidney was now a high-level executive.  The Evening World said of the Ripleys in 1905, “[they] are well known in society.  They have given many entertainments and last year’s coming-out ball for their daughter, Anna, at Sherry’s was the largest of the season.”

After waiting three years for their new home to be completed, they would not live in it very long.  On the evening of Tuesday, February 21, 1905, just three months after moving in, Ripley noticed a slight pain in his abdomen; but gave it little thought.   But later that night the pain was so intense that the Dr. Joseph A. Blake, was called.

Blake recognized the problem as appendicitis, but was seriously concerned about his patient’s condition.  He called for Dr. W. T. Bull and they decided an immediate operation was necessary.  The Evening World reported “The physicians were amazed at the rapid advance of the disease, which appeared in a malignant form.”

The long operation in Ripley’s bedroom was completed at around 8:00 the following morning.  Almost immediately the doctors were aware that peritonitis had set in.   Two days later there was little hope.  The New-York Tribune reported that Ripley’s condition was “extremely critical” and that “The crisis is rapidly approaching.”  Sidney Dillon Ripley died in his new home later that afternoon, on February 24, 1905.

Ripley’s standing in New York business and society was evidenced at his funeral at the Church of the Heavenly Rest on February 27.  Not only was the church filled with powerful businessmen and politicians like Peter Cooper Hewitt, Chauncey M. Depew and Elihu Root; but his pallbearers included Oliver Ames, August Belmont, and H. C. Deming.

Mary Ripley left the 79th Street mansion, never to return.  She leased it that year to Charles and Gustavia A. Senff, whose country home was at White Stone, Long Island.  (The New York Times deemed it “one of the finest residences on Long Island Sound.)  Others would lease the mansion over the next few years—like James W. Lane who took it in 1909—but Gustavia Senff would eventually return for good.

Charles Senff was related to the Havemeyer family—the Sugar Kings.  He was a director of the American Sugar Refining Company and, like his relatives, had amassed a fortune.  He died at the Whitestone estate on August 23, 1911 at the age of 74, leaving his widow an estate valued at approximately $11 million.

At the time Mary Hyde Ripley was considering marriage to Charles R. Scott.  It was most likely this that prompted her to sell No. 16 East 79th Street in January 1912.   The sale caught the attention of real estate operators city-wide.  “The price paid for the Ripley dwelling is said to establish a record for the sale of a private residence of that size on a side street,” noted The New York Times on January 24.  The newspaper added “It contains a number of large rooms admirably designed for entertaining.”

The buyer was recently-widowed Gustavia A. Senff.  She paid Mary a staggering $400,000 for the mansion—about $10 million today.  Gustavia would be moving into an exclusive neighborhood.  Her neighbors would include millionaires Stuyvesant Fish, James B. Duke, Isaac D. Fletcher, and J. Woodward Haven.

Gustavia filled No. 16 with the priceless artworks she and Charles had collected.  The paintings ranged from Old Masters to modern masterworks and the Senff collection was well recognized during their lifetimes.

The mansion was the scene of Gustavia Senff’s upscale entertainments; like her occasional hostings of the exclusive Thursday Evening Club.   No hint of scandal or disrepute could be linked to the address until she left New York in 1921 for an extended trip abroad.

On August 16 that year the New York Herald reported that “Mrs. Charles H. Senff…well known in New York society, has joined the list of Americans who have rented historic English houses during temporary residence abroad.”  The article said she had leased Cobham Hall in Kent for the autumn; followed by Invercauld Castle in Scotland.

Gustavia would not return for a year, and in the meantime would be living among history.  The Herald pointed out, for instance, that “several British sovereigns have lived or been entertained” at Cobham Hall.

While she was gone she leased No. 16 to millionaire and mining engineer Edward M. Breitung.  She had barely boarded her steamship when her tenant was arrested on September 21, 1921 following a raid on a tenement house brothel.   “Mr. Breitung was alleged to have been in the apartment of a Mrs. Kifr, at 840 Madison Avenue, with two women when the place was raided by detectives,” advised the New-York Tribune.

Brietung escaped prosecution.  On November 10 the Tribune reported that his case was discharged after the judge, Moses R. Ryttenberg, decided that “only persons deriving remuneration from the violation” were subject to court action.

When Gustavia A. Senff returned to No. 16 so did respectability.  She stayed on until her death in the house on November 15, 1927.

In April 1929 the mansion was purchased by Lewis Nixon, Jr. and his wife, the former Sally Lewis Wood.   Married in 1891, the couple had an adult son, Stanhope Wood Nixon.  Nixon had retired from the United States Navy the year he married Sally; the same year that he designed three battleships—the Oregon, Indiana and the Massachusetts.  He was now the President of the Nixon Nitration Works.

Sally, who included among her ancesters General Andrew Lewis of Colonial Virginia, was a member of the Colonial Dames of America and the Daughters of the American Revolution.

No. 16 continued life as a single-family home until 1956.  That year an interior conversion resulted in doctors’ offices throughout the first four floors, with two apartments on the fifth.  Sadly, at this time the exterior was altered as well.   The elegant portico was removed and the window surrounds drastically reduced, including the loss of their handsome cornices.  Although the lovely Georgian balustrade survived above the cornice, its hefty stone urns were removed.

Among the many doctors who practiced from No. 16 throughout the next decades, none would draw as much attention as Steven Levenkron, a psychotherapist who specialized in eating disorders.  In 1981, began treating pop singer Karen Carpenter who suffered from anorexia.

In 1979 the lower floor of No. 16 was converted to an art gallery, the Saidenberg Gallery, the first in several to be housed in the space.  Today it is home to the Bjorn Ressle Fine Art gallery. 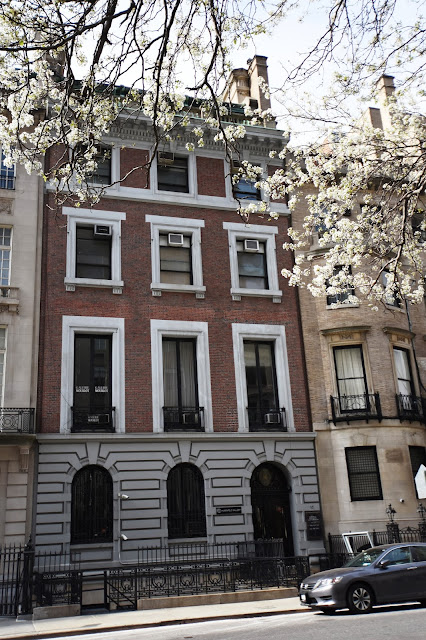 Warren & Wetmore’s once stunning neo-Georgian mansion still hints at its former glory.  And it perhaps makes us wish that landmark laws had been in place a few decades earlier.