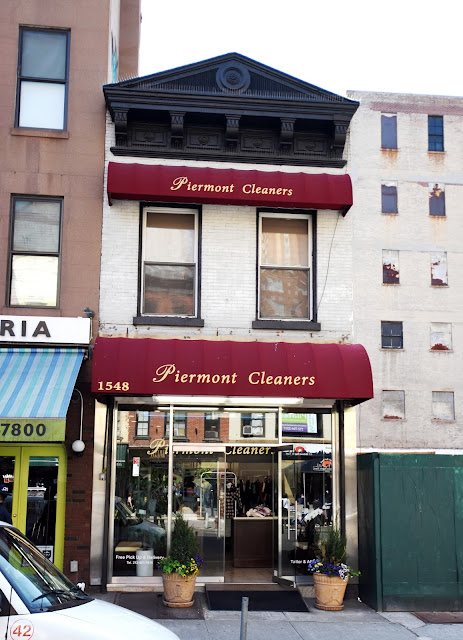 In the 1880s German immigrant Lorenz Hassinger operated his saloon at No. 91 First Avenue, between 5th and 6th Streets.  Located within the Kleindeutschland, or Little Germany, neighborhood, Hassinger’s saloon specialized in German wines rather than beer.

But on May 30, 1891 Hassinger embarked on a move to another German district, Yorkville.  He signed a 12-year lease with Patrick Reynolds on “the entire building” at No. 1548 Second Avenue between 80th and 81st Streets.

The “entire building” was just two stories tall and 14.5 feet wide.  Above the lower store space was a single apartment, most likely originally intended for the shop owner.  The tiny brick structure was emboldened by a rather pretentious bracketed cornice and triangular parapet.

Hassinger opened his saloon on June 1, 1891.  But he chose to rent the upstairs apartment rather than move his own family in.  His German tenant, Otto Held, looked forward to the free weekly concerts in East River Park (known now as Carl Schurz Park) in 1892.  But there was a problem.

On June 16 The Evening World reported “There is a prospect that the regular Thursday concert at East River Park one week from to day will be given in the evening instead of afternoon, and that to-day will see the last day concert in this pleasant resort, whose frequenters are prevented by their work from visiting it in the daytime.”

Working men like Held eagerly anticipated the evening band concerts with the cooling river breezes.  But Paul Dana, President of the Park Commissioners, foresaw a danger to children.  He told a reporter “The only question seems to be whether the railing along the esplanade, next to the river front, is safe, with the crowds of children that would be attracted there by evening concerts.”

The Evening World felt Dana was being needlessly cautious.  “The only remaining objection to evening concerts at the Park now appears to be the unsafe condition of the railing along the river front, and this certainly is trivial.”  Asserting that “the last few days hint strongly that the warm season has fairly set in, and this is another forcible argument against further delay in the matter,” the newspaper circulated a petition urging the Park Commissioners to forge ahead with the concerts.

Among the long list of signatures was that of Otto Held.

Six years before the expiration of his lease Lorenz Hassinger seems to have closed his wine saloon.  On March 16, 1897 his lawyer, Kaufman Simon, filed a claim with the City for $76.93 “for amount refunded on unexpired Excise License for premises No. 1548 Second avenue.”

Adolph Pohl converted the saloon to his “house furnishings” store which was operating in 1898.  The long tradition of German-born occupants continued when owner Susan Reynolds Cherrie leased the building to Louis Zimmerman in 1917.  Zimmerman ran his business here and before long purchased the property.  In 1922 his son, Leopold Zimmerman, sold No. 1548 to John Mottmann who said he would “alter and occupy” it.

Following World War I Yorkville had also become the center of the City’s Hungarian population.  By 1940 the Hungarian population topped 123,000; making New York’s the largest Hungarian center in the country.  By 1933 No. 1548 Second Avenue was home to Kaufer’s Import House.

On March 12 1945 The New York Times recommended it as a place to find exotic spices.  “Culinary enthusiasts who enjoy browsing in unusual shops will find some interesting spices at Kaufer’s Import House, a small and cluttered establishment…where various kinds are still in stock.  Some are left over from happier days, while others are South American in origin.”  The article noted “The Hungarian proprietor is especially pleased with his supply of black and white pepper, which you may have either ground or whole for 5 cents an ounce.”

The shop offered, of course, paprika; but it also sold spices and herbs less known to mainstream New Yorkers.  It also sold authentic Hungarian specialties like “sheep’s milk cheese and home-made prune lekvar.”  The customer interested in buying lekvar—a puree of cooked prunes—could purchase it for 25 cents per pound.

Kaufer’s Import House remained in the little building for years, followed by Paprikas Weirs where, according to The Times “spatzle machines and sweet Hungarian paprika are available.”  That shop would serve the neighborhood for at decades, beginning around 1965. 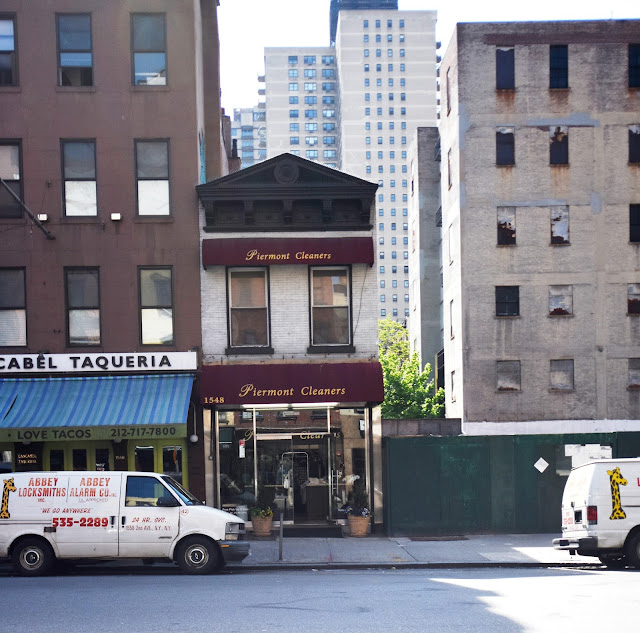 Today Lorenz Hassinger’s skinny saloon structure is home to a dry cleaning establishment.  The Victorian storefront was long ago obliterated.  But the charming little building with its ambitious headgear is a picturesque relic of a time when German, not English, was spoken on this stretch of Second Avenue.