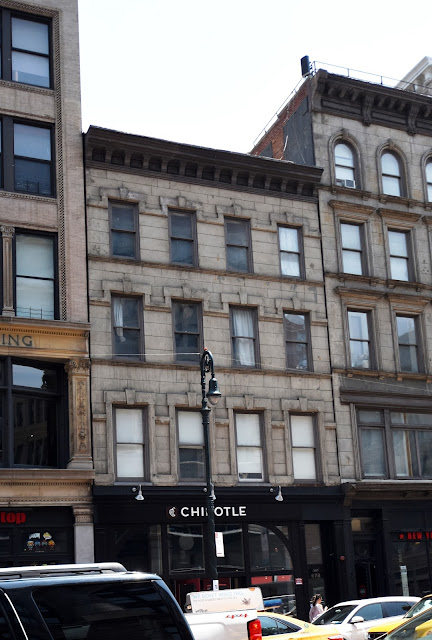 In the years prior to the Civil War French immigrant Jean George Torrilhon had established himself in the butcher and catering business.  In 1860 the Thompkins Market opened near the Cooper Union.  It was an unusual cast iron-fronted building with a split personality.   The upper floors housed the Armory of the Seventh Regiment, while the ground floor served as a high-end grocery.

In 1862 historian Thomas F. DeVoe recorded the scope of Torrilhon’s offerings.  “Under the stairway are located stands Nos. 43 and 45, kept by two Frenchmen, (F. A. Bailly and J. G. Torilhon [sic],) who keep, besides pork in every conceivable form, boned turkeys, capons, larded bird-game, filet de boeuf, etc., many of which are cooked ready ‘for parties, breakfasts, dinners, or suppers, cold or warm.”

In the meantime to the west, Sixth Avenue was changing.  Modest brick-faced homes lined the blocks between 14th and 23rd Street; but the uptown movement of commerce was already making itself felt.   By 1869, the year that Edwin Booth opened his colossal granite Shakespearean theater  at the corner of 23rd Street, Torrilhon had opened the Torrilton House on the opposite corner.

On October 17 that year he advertised “Fine Apartments for families and single gentlemen to let, with Board; the very best table d’hote in the city, being served at 6 o’clock; terms moderate.”

But Torrilhon’s hotel would not last long at that location.  On July 8, 1870 architect Julius F. Munkwitz filed plans for a “four-story Ohio-stone front hotel” two blocks to the south at 344 Sixth Avenue, between 21st and 22nd streets.  The Real Estate Record & Builders’ Guide noted that Vanderbilt & Ackerman would be the builders.

The choice of architects was perhaps surprising since Munckwitz was at the time the Supervising Architect and Superintendent of Parks.  While working on Thorilhon’s hotel he was simultaneously designing park structures with Calvert Vaux and Jacob Wrey Mould. 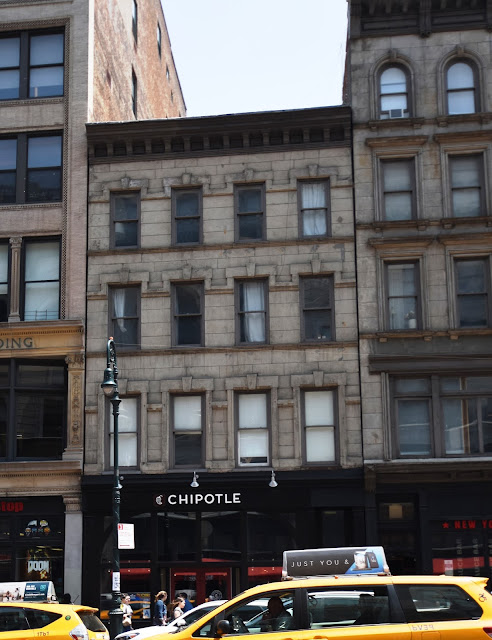 It would seem that Jean George Torrilhon never intended to move his Torrilhon House into the new building.  On February 26, 1871 he advertised “To let—Very nice, small hotel, well situated, furnished or unfurnished; possession immediately.  Inquire at 344 Sixth avenue.”  Torrilhon’s restaurant background was reflected in his boasting “The kitchen has one of those imperial French ranges of Moneuse & Duparquet; the only good one in America.”

Torrilhon either changed his mind, or simply had no takers.  The new hotel became the Torrilhon House; and Torrilhon partnered with John P. Dietrich to establish a restaurant on the first floor.

The residents of the upper floors were apparently financially comfortable.  One of the earliest left her French silk umbrella at the Second National Bank on the corner of Fifth Avenue and 23rd Street in June 1871.  She placed an advertisement in the New York Herald, describing it as having “a golden rim,” and offering a $3 reward.  The generous reward would amount to $60 in 2016.

In 1873, the same year that Torrilhon brought Julius Munckwitz back to enlarge the hotel to the rear, a French couple moved into Room No. 1.  City life appears to have been not to their liking, however.  An advertisement in the New York Herald on August 19 read “A French gentleman and his wife, recently arrived from Europe, desire to find Board with an American family in the country, where they could exchange French for English lessons, or give French lessons for part board.”  After giving the Torrilhon House as his address, the Frenchman added “P.S.--The lady is a first class dressmaker.”

In 1887 No. 344 was purchased by John Parke.  He and his wife had lived on the third floor since its opening.  He immediately brought in architect and contractor J. H. Fitzpatrick to remove the restaurant and install a new storefront.  The alterations cost him $400.  The newly-created store was became John Clark’s hardware store.

Mrs. Parke was a fixture at her third floor window.  By now the avenue below had become a major shopping district, vying with Broadway.  Old-fashioned and outspoken, she was known to shout down to women below if their demeanor or apparel induced her displeasure.

But the habit caused her serious problems on Sunday evening, July 12, 1891.  Two days later The New York Times reported “Mrs. John Parke, who has lived for years at 344 Sixth Avenue, is in a peck of trouble.”  The newspaper said that she had been enjoying the Sixth Avenue sights “and still livelier Sixth Avenue fashions” that evening.

When she saw two women wearing what she considered outlandish costumes, she let out a barrage of insults.

“Mrs. Parke is not identified with the new school, and as may be imagined sees cause for frequent ejaculation from her vantage point above the sidewalk, and in an ejaculatory period of unusual extent on Sunday evening she was unfortunate enough to have her artificial teeth escape and fall to the walk below.”

The women saw their opportunity for revenge.  “A couple of wonderfully bedecked women approaching—their starling appearance had been the cause of Mrs. Parke’s wide-mouthed emotion—saw the teeth as they struck the pavement, and lost no time in taking possession of them.”

The dentureless Mrs. Parke tried her best to call the women back; to no avail.  She placed an advertisement in the morning paper, offering “a suitable reward for the return of the teeth.”

The New York Times jibed on July 14 “The advertisement brought a score of persons with teeth to exchange for money, and as a result Mrs. Parke was in such a state of mind yesterday afternoon that she did not feel like discussing the matter.”

In 1895 John Parke took out a $55,000 loan on the building, presumably to convert the hotel to commercial lofts.   By 1898 the upper floors were filled with a variety of small businesses, including Bruno Lueddeker’s retail fur shop; Lillian Fimbell, “ladies’ hairdresser;” M. Standish, “manicures;” drawing and painting instructor Newell Favarger, and Kate McCrane’s lamp shade business.  The first floor was once again a restaurant, operated by George Hoeffler and his wife, Clara.

Parke had died by 1899, but his family held on to the property and replaced the storefront that year.  The eastern side of Sixth Avenue had seen the arrival of massive shoe concerns in the 1890s—most notably those of Andrew Alexander and Alfred J. Cammeyer.  In the first years of the new century No. 344 Sixth Avenue, too, began filling with shoe retailers.

The first was the Oppe Shoe Company, which leased the new ground floor store and the basement.  In 1904 the other tenants in the building were the Manhattan Dental Company on the second floor, and the Spencer Umbrella Company on the top two.

Around 5:00 on the afternoon of June 7, 1904 fire broke out in the basement.  The Times reported “There were a number of people in the shoe store and in the dental parlors.  All of them ran hurriedly to the street.  Everyone succeeded in getting out before the fire gained much headway except Charles Carpenter, an old man, who was in a rear room on the third floor.”

Carpenter was disoriented and nearly overcome by the smoke when he succeeded in finding the front window.  He had climbed half-way onto the sill when he fainted.  A police officer was able to reach him from the third floor window of the adjoining window, and push him back into the building and safety.  Later a fire fighter climbed a ladder and brought the unconscious man down.  The damage to the building was estimated at $2,000 (about $55,000 today).

Soon the shoe store of Frazin & Oppenheim moved in.  The store started operation in 1901 and by 1909 had six other New York stores when the over-extended firm faced bankruptcy.  The Shoe Retailer reported on October 9 that year “The store at 344 Sixth avenue was bought, lease, stock and fixtures, by Schwalbe Bros., who will continue the business at that place.”

Shoes would be replaced by garments within the decade.  In 1915 the store and basement were leased to David Weiner for his ladies wear shop, the Weiner Busy Cloak Co.  Other apparel companies to lease space within the next few years were the Martin Hemstitching Company, Antaky & Fazio, embroiderers, and the Century Braid Company.

The building was the scene of a mystery on December 3, 1914 when Robert L. Gordon discovered a four-month old baby girl “sitting in a go-cart” in the hallway.  Gordon called Patrolman Kelly who went from office to office in the building; but no one knew where the baby had come from.

The little girl was taken to the West 20th Street Station house for several hours; when to Bellevue Hospital.   The baby’s mother had carefully dressed the child before abandoning her.  The Times said “The child wore a white coat, a white dress, white knitted bootees, knitted underwear, and a pink petticoat.  It was wrapped in a s mall blue quilt.”

In 1925 Sixth Avenue was extended to the south, resulting in the renumbering of the building to No. 680.  Throughout most of the 20th century the former hotel was home to an assortment of small businesses—dressmakers and embroiders, for instance--on the upper floors while various stores (one a china and glass merchant) occupied the street level.

After the dark period of the 1970s and ‘80s when the buildings of the Ladies’ Mile suffered neglect and abuse, a renaissance gave them new purpose.  In 2005 No. 680 was connected internally with No. 678 and renovated to apartments.

photographs by the author
Posted by Tom Miller at 4:07 AM