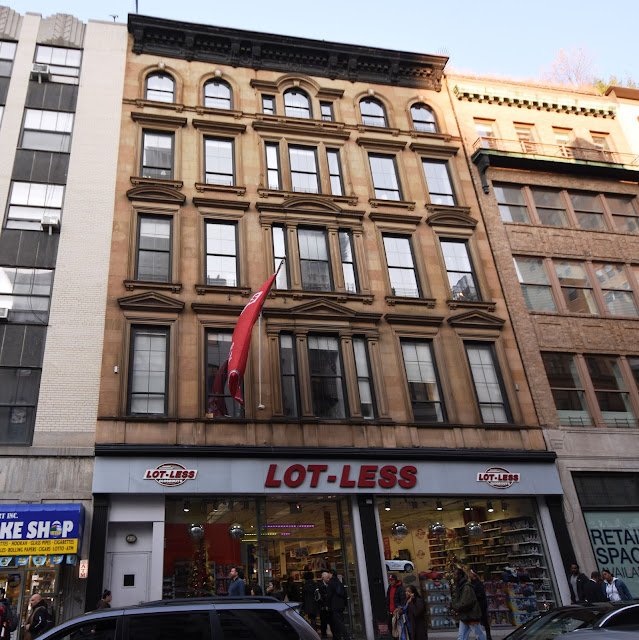 One of the first of the high-end residences on Chambers Street between Broadway and Church Streets to succumb to commerce was the mansion of Dr. David Hosack at No. 97.   The doctor, deemed by The New York Times as “one of the most skillful and widely known of New-York physicians,” had been the attending physician at the duel between Alexander Hamilton and Aaron Burr in 1804.

Dr. Hosack’s “magnificent” mansion and property ran through the block to Reade Street.  In 1857 his estate demolished the house and began construction on a modern loft building—one of the first in the formerly exclusive neighborhood.  The unknown architect designed a five-story Italianate structure faced in sandstone.   The elegant façade featured classic pediments over the openings and Palladio-inspired grouped windows at the center of each story.  A pressed-metal cornice with foliate brackets crowned the structure. 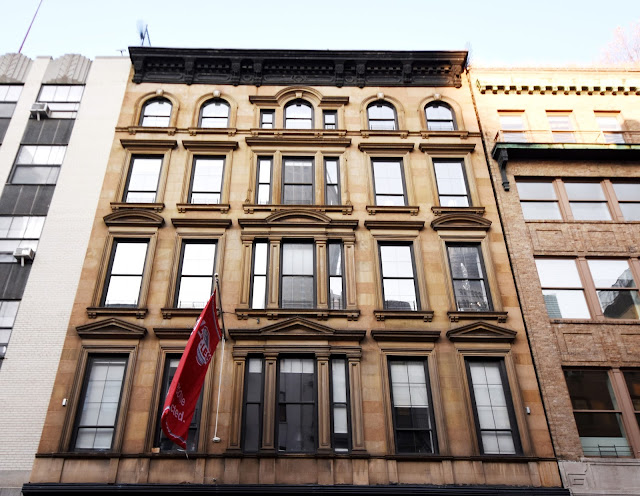 Completed in 1858, the building quickly filled with drygoods merchants.  Among the first were Dibblee, Work & Moore; George C. Wood; Leonard D. Atwater; and Burnham, Plumb & Co.—all of which were here by in 1859.

For three days in 1863, beginning on July 13, New York City was terrorized by what would become known as the Draft Riots.   The largest civil and racial uprising in United States history, it resulted in at least 120 murders, 2,000 injuries, and no fewer than 50 buildings—including churches and an orphanage—burned to the ground.  The carnage and vandalism was city-wide, including Chambers Street.   Burnham, Plumb & Co. occupied the ground floor of No. 97 Chambers, making its store vulnerable to attack.  A few months later J. M. Plumb claimed $191.12 in damages—in the neighborhood of $3,720 in 2016.

At the time of the Draft Riots the hoop skirt had taken control of women’s fashions.  A complex, collapsible frame supported yards of fabric spilling into a great circle from the feminine waist to the floor.  By 1865 Wests, Bradley & Cary had its “duplex elliptic hoop-skirt” warehouse on the upper floors of the building.

On Sunday, July 2 that year all the workers in the hoop skirt factory went on their annual “picnic excursion.”  Between 10 and 11:00 on that night fire was discovered bursting from a fifth floor window on the Reade Street side.

The location was too high for Civil War period steam fire engines “and it was manifest that the fifth floor of the building must be consumed,” reported The New York Times.  Fire fighters focused on deluging the fourth floor and dragging their hoses to the roofs of adjacent buildings to douse the roof.

The Times reported that “platoons of policemen from their respective precincts” were on the ground controlling crowds and preventing looters.  Among these officers was Mortimer Downing who was stationed at the Chambers Street side door.  He was instructed by Captain Greer “to admit no person without a badge.”  It was an order that would unexpectedly result in problems.

Assistant Fire Marshall Henry O. Baker arrived on the scene in street clothes; having neglected to grab his shield.  The Times would later report “as Mr. Baker had forgotten that important adjunct, Patrolman Downing thrust him from the building, using, however, a baton that he need not have drawn.”  Indeed, Downing had given the assistant marshal a substantial jab in the ribs with his baton to induce his exit.

When the fire was finally extinguished, Wests, Bradley & Cary had suffered a staggering $100,000 in damage to its “heavy stock of skirts and materials,” as had Dibblee, Work & Moore and Burnham, Plumb & Co. on the ground floor.    Two days later The Times noted “The building, which is owned by N. P. Hossack [sic], Esq., and insured for $60,000, can hardly be repaired for $5,000.”

Twelve days later the newspaper followed up on the Downing-Baker incident.  “Officer Mortimer Downing was required to answer for unnecessary violence in ejecting Assistant Fire-Marshal Henry O. Baker, of Harlem, from No. 97 Chambers-street, at the time of a fire therein.”  The policeman’s representative put the best spin he could on the episode.  “Our officer may have been a little rough, but it was his duty to protect property at that fire, and he appears to have executed his orders; but his manner of doing this was, perhaps, not the best.”

Things were back to normal at No. 97 Chambers Street within the year.  On May 9, 1866 Wests, Bradley & Cary advertised its newest skirt, “the celebrated Empress Trail.”   The firm’s ad in the New-York Tribune promised it “is the most beautiful and agreeable skirt ever worn, being particularly adapted to the present fashionable style of dresses.”  Their hoops, they boasted, “will not bend or break like the Single Springs.  They are acknowledged by all Ladies throughout the length and breadth of the land, to be the most perfect and agreeable skirt ever invented, and unequaled in Elegance, Elasticity, Lightness, Durability, Comfort and Economy.”

By the last quarter of the century the dry goods and apparel firms had left the area.  By 1889 W. B. Fox & Bros., a hardware and builders’ supply company, was in the building.  The firm, which would remain here for decades, was looking for a new employee on September 10, 1895.  An ad in Hardware read: “By a prominent Hardware house, a first-class clerk who understands the builders’ department, competent to take a leading position.”  The advertisement insisted the candidate have a “good address and [be] able to give the very highest references.”

When the Steadman Stationery Company was organized in January 1889, it opened in No. 97 Chambers.  Although it started with an impressive capital of $30,000; the store suffered financial problems before too long.  On October 18, 1892 the Sheriff took possession of the store after Manley A. Ruland executed his promissory note of $2,020.  (The store survived the setback and was still here a decade later.)

More successful was the Brown Developing Company.  The firm drew attention in February 1893 when it began tests on its new Crematory Furnace.  The device was invented to improve the disposal of garbage in large cities.  Iron Age reported on March 1 that during a test to incinerate Boston garbage, “the temperature at the head end of the furnace was 2500 degrees, at the rear end 1800.”

Surpless, Dunn & Alder was also in the building at the time.  The firm was the selling agent for a wide range of manufacturers, including the Syracuse Specialty Mfg. Co., makers of Star Lawn Rakes; the Nes Chain Mfg. Company of York, Pennsylvania; and the Farmer’s Friend Mfg. Company of Dayton, Ohio.  Another hardware-related firm in the building in 1893 was The Chicago Spring Butt Company, which made the Uncle Sam Hanger (for sliding doors).

By now the bicycle fad had taken America by storm.  No. 97 was home in the 1890s to Allerton-Clarke Company, representatives of the Lovell Wrench Company in Bridgeport, Connecticut.  That firm’s Lovell Bicycle Wrench was a must-have for "wheelers" and was touted by The Iron Age on October 22, 1896 as “made of best steel and case hardened.”

The C. F. Guyon Company “which deals in hardware and bicycles,” according to The New York Times, was here by 1895.  The newspaper noted “the company represents sixteen manufacturers of hardware in various parts of the country, and also handles the goods of the Monarch Cycle Company of Chicago.”

Bertha Windle worked as a saleswoman in the store.  During the first week of January 1898 she went to the woodshed behind her home on Kingston Avenue in Brooklyn to retrieve her bicycle.  To her shock the shed had been broken into and her bike was gone.  “When she discovered that the wheel had been stolen she informed the police,” wrote The New York Times a week later.

Although Bertha most likely got an employee discount on her Monarch bicycle; the retail price of between $85 and $100 would be equal to a substantial $2,500 to $3,000 today.   But while she lamented the loss of her bicycle, Brooklyn cops were on the case.

The thief, 35-year old John Dougherty headed to his home at No. 350 North 2nd Street in Brooklyn.  The sight of a grown man on a woman’s bicycle raised the suspicion of Policeman Clark of the Bedford Avenue Police Station.  He chased Doughtery down and brought him in for questioning.

The suspect said he found the bike and declined to give any further information.  Detectives refused to give up.  They canvassed every bicycle store in Brooklyn and then turned their attention to Manhattan.  On Saturday January 8.  Bertha Windle was no doubt overjoyed when the investigators entered Guyon Company.  The Times reported on “they found the owner for the wheel.”

In May 1898 another bicycle-related firm took space in the building.  The Hartford Rubber Works Co. made tires not only for bicycles, but for automobiles.  A moving notice in The Sun on May 8 promised “Our new plant is equipped with every appliance for the care of our tires and we are now in a position to give our many local patrons better service than ever before.”

J. Newcomb Blackman was in the bicycle business; but he became more interested in the invention of his friend, Thomas Alva Edison.  On May 1, 1902 he established the Blackman Talking Machine Co. with his wife, Ada.  Initially the firm was the exclusive wholesale outlet for Victor products.  The Victrola-selling concern would make strange bedfellows with his the bicycle and automobile firms that were filling the building.

In the meantime, Robert P. Parker, manager of the Hartford Rubber Works office was possibly shocked when $700 was missing from the accounts of his cashier, Clara Schillinz, in January 1904.  Clara lived on Staten Island and had worked in the office for a more than a year.  Whether he was shocked or not, Parker was obviously outraged.  He had Clara arrested for grand larceny on the night of January 15.  The Times reported “Miss Schillinz was locked up in the Mercer Street Station.”

Individual consumers in the market for a Victrola in 1919 were possibly disappointed when J. Newcomb Blackman announced on May 1 that his firm would no longer offer the Victor products at retail.  “The business of the Blackman company will hereafter be conducted at wholesale exclusively,” he said.  Nevertheless, the Blackman Talking Machine Company continued to do business from No. 97 Chambers Street.

Baker, Murray & Imbrie, Inc. was a major retailer of sporting goods.  Its broad array of merchandise included fishing tackle, guns and rifles, camping equipment under the brand name “Abercrombie’s Camp,” and golf and tennis goods.   In April 1920 it moved is massive retail operation from Warren Street to the Chambers Street building.

Two years later it got in on the bicycle business by adding Emblem Bicycles to its stock.  The average cost of a bike was now about $50; a significant drop from the days when Bertha Windle purchased hers.

Although Ambercrombie tents were still available here in 1957; most of the early 20th century tenants were gone.  Blackman Talking Machine Co. went out of business in 1932; replaced by Charles Holtz’s “haberdasher” store.  In the second half of the century, as the Tribeca block became a bit seedy, the building became home to an entirely new type of tenants.

In 1959 Cetra Record Distributing Company moved in, and in 1966 Chambers Record Corp. was here.  In July the following year Arrow Electronics, Inc. moved into the building, claiming to have “the newest and most modern showroom in the city.”

As the century drew to a close Tribeca was rediscovered.  The 19th century shop front, which had survived 134 years, was destroyed to be replaced by plate glass and metal.  In October 2003 a renovation was completed which resulted in four “loft dwellings” per floor above the new store.

The elegant design of the upper floors survives beautifully intact.  After more than a century and a half No. 97 Chambers Street is a graceful reminder of the first steps taken to transform this residential block into a bustling commercial hive.