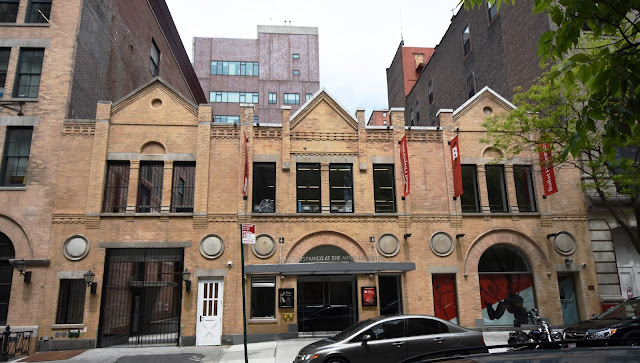 In 1892 developer Edward Bedell addressed an important need of the settlers in the developing Upper West Side—transportation.  Citizens wealthy enough to afford the grand mansions dotting the neighborhood maintained their own vehicles and teams of horses; while many of those living in the vast new apartment buildings often hired horses and carriages.

Bedell acquired several vacant plots on West 89th Street between Amsterdam and Columbus Avenue and commissioned Frank A. Rooke to design four structures—three connected private carriage houses at Nos. 167-171 and a five-story boarding stable at No. 175.   The 30-year old architect had only recently dissolved his partnership with Paul F. Riggs.   And while the 89th Street stables were not his first—he had designed a multi-use apartment-stable-shop structure in 1887—they would set a course.  He is best remembered today for his several stables and related buildings.

The three two-story carriage houses at Nos. 167-171 were clad in sandy-colored brick.  Rooke saved on costs by using brick rather than stone or even terra cotta as his primary design material.  It appears in the creative honey-combed corbelled cornices, the delicate detailing of the second floor cornice, and the vast vaulting eyebrows over the gaping carriage bays.

Legg was a highly-successful millinery importer.  The family’s country home, Crestlawn, was in Tarrytown.  It was there on September 9, 1893, that daughter Annie M. Legg was married to Arthur Platt Howard.  Calling the wedding socially “interesting,” The New York Times reported “The wedding breakfast was served on the wide piazza of the house.”

A year later, in November 1894, Annie’s sister Clara was married to Henry W. J. Bucknall, “well-known as an enthusiastic yachtsman,” according to The Times.  The newspaper added that Clara was “an attractive blonde.”

With his daughters married, George Legg turned to more practical matters: feathers.  In May 1899 he joined several other wholesale millinery merchants to form the Millinery Merchants’ Protective Association.  The purpose of the national board of trade was to watch legislation.  “Particular attention will be directed to resisting efforts to pass laws forbidding the wearing of feathers on hats,” reported The Sun.  The newspaper’s headline read “The Birds On Her Hat.”

While George Legg concerned himself with feathers on ladies headwear; a significant change was taking over American transportation.  For two decades inventors had been tinkering with the automobile.  The first carriage-sized steam-powered car appeared in Wisconsin in 1871; and in 1886 Karl Benz had invented the gasoline-powered automobile.  The end of the line for horse-drawn vehicles was clearly on the horizon.

In 1907 E. Hurd sold No. 171 to George McKesson Brown, a 28-year old millionaire.  George was highly involved in horse, yacht and automobile racing.

Having inherited his fortune from his father; it seems George was a handful in his teen-age years.  In February 1896 his step-mother Ruth A. Bruce-Brown threw her hands in the air and asked the courts to allow her to resign as guardian of George and his estate.  The exasperated woman told the judge that she and the 17-year old “cannot agree.”

That George McKesson Brown, now 30 years old, ever housed a horse at No. 171` West 89th Street is doubtful at best.  His passion for motorcars and his financial ability to spend lavishly on them was evidenced a year earlier when he hired professional driver William Luttgen to race his newly-purchased 120-horse power Mercedes Benz in the Vanderbilt Cup course.

It was most likely George’s passion for yachting and racing that prompted him to leave Manhattan.  His magnificent 40-room French chateau, Coindre Hall, on Long Island’s Gold Coast was completed in 1912.  Nevertheless, he retained ownership of the 89th Street stable for several years.  In September 1915 he leased it to Nathaniel Champion “for use as a garage.”  When Brown sold the property five years later, it was still listed as a “two story private garage.”

Throughout the century the little buildings endured several uses.  No. 167 was owned by the City by, at least, 1919 when the Board of Standards Appeals offices were there.  In 1961 No. 171 was home to the Hawkes Ambulance Service; and No. 167 was a field office for the City’s Housing and Redevelopment Board.  By 1970 it had taken over all three buildings, using No. 171 for its Welfare Relocation Office.

In 1976 the City agreed to charge the Ballet Hispanico School of Dance a nominal $375 rent for No. 167.  The school spent $20,000 on renovations which resulted in two dance studios.  By 1984 Mayor Ed Koch and his Cultural Affairs Commissioner, Bess Meyerson, helped the school obtain $359,000 of Federal community-development funds to purchase and rehabilitate both Nos. 167 and 169.  Eventually the organization took over all three buildings.  Nos. 167 and 169 were gutted and joined internally by the architectural firm of Buck & Cane. 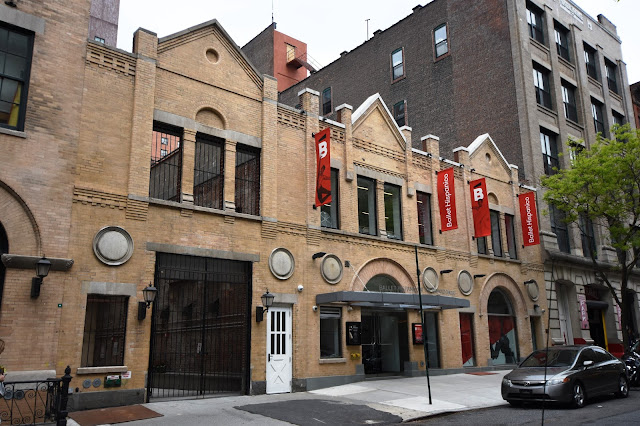 The arched Romanesque entrance to No. 171 was replaced by a less-exciting rectangular opening, and it interiors were gutted to become a courtyard and service entrance.  The architects’ renovations sensitively preserved the integrity of Rooke’s designs and the buildings’ utilitarian origins, while bringing them squarely into the modern era.