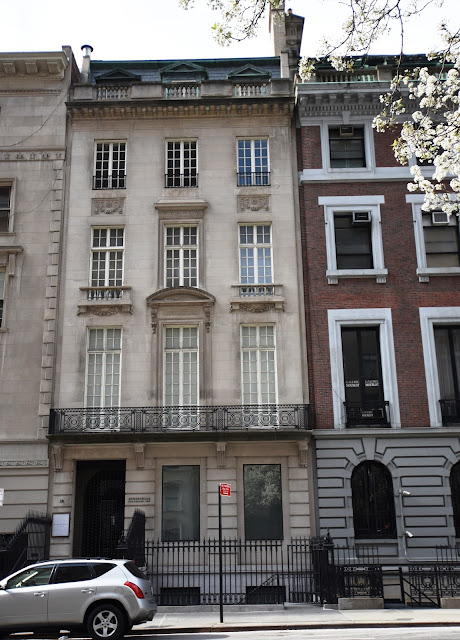 Most American architects in the years surrounding the turn of the last century considered themselves the inheritors of all that had gone before.  A Renaissance-inspired house designed by prolific architect Clarence True, for instance, might sprout Flemish stepped gables; or another architect might create a hybrid mansion from as many as three disparate styles.  The same could not be said of Ogden Codman, Jr.

Codman was born into privilege in Boston; but in 1875, at the age of 12, moved to Dinard, an American resort colony in France, where he remained until 1884.  He greatly admired French architecture of the 16th through 18th centuries; and so when he designed the homes of American millionaires, he did not adulterate the architecture he loved.

In the spring of 1908 banker J. Woodward Haven and his family were living at No. 100 East 79th Street, at the southeast corner of Park Avenue.  When his father, financier and railroad tycoon George Griswold Haven, died in March that year, Haven received a substantial inheritance (his widowed step-mother received nothing because of her personal fortune estimated at $20 million).  Haven now looked to upgrade his living conditions.

He commissioned Ogden Codman, Jr. to design a mansion two blocks east at No. 18 East 79th Street; closer to Central Park and ultra-fashionable Fifth Avenue. Codman filed plans that summer.  They called for a five-story, 30-foot wide residence to cost $150,000—in the neighborhood of $4 million today.  The Sun described the proposed mansion saying “It is to be of Colonial design, with a façade of limestone and a mansard story finished in terra cotta with an ornamental balcony.  The dining room and reception parlor will be on the main floor, reached through a vestibule hall paved with marble.  The second story will contain the drawing room and picture gallery, and the fourth floor will be fitted with children’s rooms and a playroom.”

Codman may well have been offended by the newspaper’s description of the townhouse as “of Colonial design.”  He had meticulously made scale drawings of an 18th century house in Bordeaux, which he then adapted for the Haven mansion.   A historical purist, the resulting house was essentially a recreation; a French period piece set on a Manhattan block.

The Haven family, or perhaps merely New York society columnists, were a bit over-eager for the house to be completed.  On October 25, 1908, only a few months after the plans were filed, The New York Times lamented “Mr. and Mrs. J. Woodward Haven are to pass the Winter at 100 East Seventy-ninth Street.  They will not be able to get into their new house, 18 East Seventy-ninth Street, this Winter.”

By the following winter season, however, they family would be in the completed mansion.  The New York Times would later mention that the 22-room home “contains outstanding examples of oak paneling and rare marbles, with walls constructed of Caen stone.”

Despite Haven’s good family name and social standing (The Granite Monthly said of his father “He acquired great wealth and had residences at Newport and Lenox, as well as in New York."), the suspicious circumstances surrounding his marriage to Henrietta Cram 12 years earlier had no doubt prompted drawing room whispers throughout Manhattan.

On January 17, 1897 the New-York Tribune published a single-line article that provoked questions.  “The engagement of Miss Henrietta Cram, daughter of the late Henry A. Cram, and sister of J. Sergeant Cram, to J. Woodward Haven, youngest son of George Griswold Haven, was somewhat of a surprise.”

The following week, on January 28, the New-York Tribune again gave the pairing a one-sentence notice, saying the wedding “will take place in Trinity Chapel on Saturday, February 6.”  But a fashionable Trinity Chapel wedding would not be.

Just three days later, in reporting that the Bradley Martins had “cards out for a large dinner on the 6th” of February, The Sun slipped in “On the same day Miss Henrietta Cram and J. Woodward Haven will be quietly married at Mrs. Cram’s house in East Thirty-eighty street.”

But vast wealth had a way of eradicating scandal—hinted or real—and by now the Havens were important players in New York and Lenox society.

Henrietta Haven poured her efforts into various charitable causes and the 79th Street house was regularly the scene of benefit sales, receptions and other events.  On November 16, 1913, for instance, The Sun noted that she had opened the mansion for the “sale of hats and fancy articles for the benefit of St. Mary’s Free Hospital for Children.”

When the United States entered World War I, Henrietta joined other socialites in helping with war relief.  As American citizens tilled their backyards to plant vegetables, she converted part of the Lenox estate’s gardens into a Victory Garden.  We can most likely assume that Henrietta was not on her hands and knees in the dirt; but her nevertheless commendable efforts resulted in a second place for produce in the Stockbridge Grange annual fair.

The following year on June 7 the 79th Street mansion was the scene of daughter Katharine Sergeant Haven's wedding to Johnston Livingston Redmond.  Katharine’s little sister, Edith, was one of the two flower girls.  The Sun noted that “Immediately after the ceremony there was an informal reception followed by a seated, wedding breakfast.”

With the Redmonds on their honeymoon, the Haven family apparently took an extended trip as well.  On August 30 it was announced that Joseph P. Grade “of the banking firm” had leased the mansion for the winter season.

Once the family was back, things returned to normal.  Katharine followed in her mother’s footsteps; and on November 22, 1922 the New-York Tribune noted that she would host a sale of “linen, Christmas presents and needlework” for the St. Sylvia’s Cottage Industries of Tivoli-on-Hudson.

1924 was Ethel’s debutante year.  The house was opened for a dinner and dance to introduce her on December 20.

In 1926 Vincent Astor leased the Haven house “for the winter season.”  Whether the Haven family decided to extend their travels; or they simply had trouble getting rid of their tenant is unclear.  In either event, Astor and his wife, Helen Dinsmore Huntington, would stay on far past “the season.”

The following spring Astor was hospitalized for more than a week.  When he was released on April 8, 1927, newspapers noted that he had been taken “to his home” at 18 East 79th.  But the Havens got their home back later that year.  On November 20 The New York Times reported that the Astors had signed a lease on a 12-room apartment at No. 1 Sutton Place for the winter.

The 44-year old was the son of financier Richard Mortimer and was a direct descendant of John Jay, first Chief Justice of the United States.   He had retired from the stock brokerage firm of Russell, Miller & Carey five years earlier, in 1932. But it was not finance for which Mortimer was nationally-famous, but sports.

The New York Times said of him “He was one of the leading amateur racquets players developed in the United States.  With Clarence C. Pell of Westbury, L.I., he stood in the vanguard of the game from 1915 until 1931.”  He had won the national championship four times, and with Pell the national doubles crown nine times.  “Possessor of a magnificent physique and fast on his feet, Mr. Mortimer put on one of the most blinding attacks the game has known,” said The Times.

Richard and Katharine had two daughters and four sons.  They maintained a summer estate in Tuxedo Park.   Shockingly, on the morning of April 5, 1947 the 56-year old athlete suffered a fatal heart attack in the 79th Street mansion.

In reporting the sale, The New York Times said “One of the world’s most famous and influential art firms, Duveen Brothers, is moving its paintings by da Vinci, Rubens and other immortals into a celebrated town house at 18 East Seventy-ninth Street in the heart of the elite residential section.”

Duveen Brothers had been located for years at No. 720 Fifth Avenue, at 56th Street; but now felt the area was becoming “too commercial.”

In 1955 the original Duveen brothers were dead and the gallery was owned wholly by a former employee, Edward Fowles.  That year a new patron entered the shop, California industrialist and collector Norton Simon. He became a regular visitor, stopping in several times a year when he was on the East Coast.  It was here that he purchased Rembrandt’s Portrait of Hendrickje Stoeffels in 1957.

Simon’s appearance in the gallery late in 1963 would change everything—for Duveen Brothers, for Edward Fowles, for No. 18 East 79th Street, and even for Norton Simon.  According to Suzanne Muchnic, in her 1998 biography Odd Man In, Norton Simon and the Pursuit of Culture, “he told Fowles that he was interested in buying a group of paintings from him, including "Bernardo Daddi’s early fourteenth-century painting, Madonna and Child Enthroned with Saints John Gualbertus, John the Baptist, Francis, and Nicholas, valued at $40,000, an Italian Renaissance painting, Botticelli’s Madonna and Child with Saint John, priced at $100,000, and The Princess of Orange, by Sir Anthony van Dyck, a seventeenth-century Flemish work with a price tag of $50,000.”

Fowles hesitated.  It was a hefty sale; but it would also heavily deplete his impressive stock.  According to Muchnic, Simon came up with an even more attractive offer.  “Why don’t I buy the whole thing, lock, stock and barrel, including the building?”

Norton Simon kept Fowles on as an occasional consultant.  His purchase included, of course, the mansion, the $14 million worth of art and a 12,000-volumne library valued at $250,000.

Duveen Brothers operated until Friday April 18, 1964 when its nearly century-long tradition of  selling fine artworks came to an end.  According to Suzanne Muchnic, Simon originally agreed to sell the Haven mansion to Acquavella Galleries for $425,000; but decided to trade it for two paintings—Henri Fantin-Latour’s 1895 White and Pink Mallows in a Vase, and Renoir’s Woman with a Rose, painted in 1916.

photograph by the author
Posted by Tom Miller at 2:06 AM